Analysis: In the ANC leadership race, past performance is no guarantee of future results 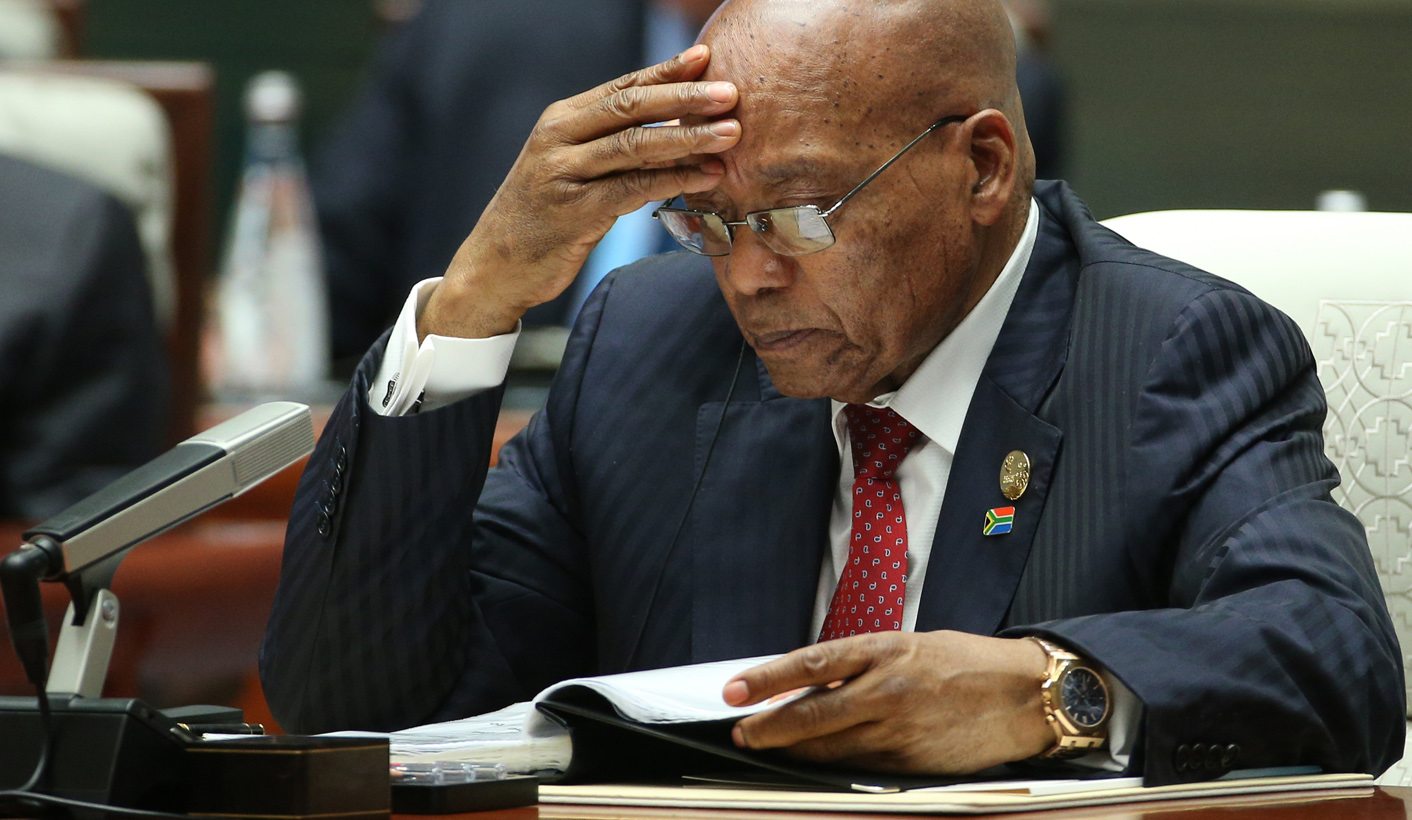 With just 10-and-a-half weeks to go until the ANC conference in December, the air is thick with predictions. Some believe Deputy President Cyril Ramaphosa has built sufficient momentum and that his train will keep on rolling on. Others, sometimes with very little evidence, believe that there is simply no way President Jacob Zuma can lose, and so Nkosazana Dlamini-Zuma is a shoo-in. In the middle are the predictions that the ANC will tear itself apart, or that a judge will have to make a final decision, or that the organisation will come to its senses and install a compromise candidate. It is important to consider what evidence we have before making predictions, because, as the banking adverts put it, “past performance is no guarantee of future results”. By STEPHEN GROOTES.

On Tuesday night, Mineral Resources Minister and well-known wedding-planner Mosebenzi Zwane spoke at a gala dinner ahead of a Mining Indaba. The dinner was boycotted by the Chamber of Mines, which pointed out that they could not trust him, that any interaction with him would “not be constructive” and that as yet he has not provided any explanation for his actions in helping the Guptas to arrange the Sun City wedding, or the claims – from a former ANC minister no less – that he tried to push Glencore’s Optimum Coal Mine out of business.

During the dinner Zwane remarked, “We already know who will be president… It’s a done deal”. Considering that Zwane would be incredibly likely to be the political equivalent of burnt toast if Ramaphosa were to win, it would appear he believes it will be Dlamini-Zuma.

He is not the only one. As Ramaphosa has appeared to build momentum, from his comment in Davos that “last night I slept in the President’s bed”, all the way through to the ANC Policy Conference (where Zuma suddenly made the suggestion that the loser of the conference should automatically become deputy leader), to last weekend’s chair-throwing contest in the Eastern Cape (where the Ramaphosa-backing Oscar Mabuyane won), there have been still many who have consistently said that Dlamini-Zuma is going to win nevertheless.

It appears that people base this primarily on two main claims. The first is the belief that “Zuma simply cannot lose”, and that he has to win if just to stay out of jail and to keep the patronage/corruption machine working. The second is based on his past performance, the fact that people wrote him off in 2005, 2006 and 2007, and as early as 2010 predicted that his presidency would not last the course.

There is some merit in all of this. It is true that Zuma would surely be in a desperate position should he fail to arrange Dlamini-Zuma’s victory in December. And it would not just be him; there are plenty of other people around him, such as Free State ANC leader Ace Magashule, or North West leader Supra Mahumapelo, who would almost certainly be in the similar position. Also, it is likely that they will control large numbers of people at the conference, and so play a key role. It is also true that Zuma has been written off many times in the past, and that some of those who say in public that he will not win this time said the same before Polokwane.

But it is also important to look at the recent evidence, the situation in the ANC at present, and how it will look in December. In other words, it is not the ANC of 2007 or 2012 that we must look at, but the situation in the party now. Just on what we can see, it is obvious that the Eastern Cape ANC is trending heavily towards Ramaphosa, that Limpopo appears to be going the same way, and that Gauteng has always been tilted in his direction. The Northern Cape is publicly for Ramaphosa (albeit also tiny in terms of absolute numbers) while the Western Cape leadership seems to be going for Dlamini-Zuma, although trying to predict anything in that province is a difficult business.

One way to determine how the picture inside the party has changed is to ask what prediction you would have made a year ago. Certainly very few people could have foreseen the situation in the KZN ANC at the moment, where a court has ruled that the local leadership should be disbanded, the NEC has appeared to agree and Zuma has gone around the NEC in the way that he has. This is a province that is supposed to be heavily in favour of Zuma, in fact the heartland of Dlamini-Zuma’s support. And yet it is also playing regular host to Bheki Cele’s tirades against state capture and the current leader of the ANC. North West still seems firmly in the Dlamini-Zuma column, but Mpumalanga is now in a much more complicated space.

There, its leader, David Mabuza, has appeared to try to make some sort of play for a “unity option”, something that could see the conference go ahead without any kind of contest at all. This has been a key intervention by the provincial leaders. The appearance of Mabuza, Ace Magashule, Gauteng leader Paul Mashatile, the (legally disbanded) KZN leadership and Mahumapelo all on that stage three weeks ago is surely the strongest indicator of the problems that Zuma is facing. Why would so many of his supporters make this suggestion at this juncture? It must surely appear as if they are playing from a position of weakness. Especially when you consider that the Ramaphosa camp has, so far, appeared to reject this proposition outright.

It is also important to apply the “what would you have predicted a year ago” test to the behaviour of Ramaphosa and Dlamini-Zuma. Dlamini-Zuma has surely been more wooden than anyone could have expected. Her campaign has appeared slow, as if it is just going through the motions. Ramaphosa, meanwhile, was being written off a year ago as simply “not having the guts” to make a proper leadership run. Very few people say that now.

In other words, if you had made a prediction a year ago of where the ANC would be finding itself in early October, surely most people would have placed Dlamini-Zuma firmly in the lead, rather than simply relying on the claims that “Zuma can’t lose” and that “Zuma always wins”.

It is also important to look at the recent score column for Zuma, in other words to examine what battles he has won over, say, the last year.

He appears to have lost on just about every front. He lost the battle to keep Des van Rooyen as Finance Minister in 2015, he lost the battle to install Andile Lungisa as leader of the ANC in Nelson Mandela Bay, he has lost the battle to get the NEC to appeal the KZN ruling, his removal of Pravin Gordhan as Finance Minister was lambasted by the National Working Committee… we could go on. And in all of this, he has not mustered the political power to move against any of his enemies. The threat of disciplinary action against Derek Hanekom and others has appeared to disappear, those who publicly challenged him over his reshuffle, have not faced any public rebuke, and NEC meeting after NEC meeting has been dominated by the question of whether Zuma would survive, rather than whether he would be able to take action against his opponents.

Of course, those who believe Zuma will win again have the obvious retort that Zuma has won simply by staying in power, and by not being removed. In some ways, this is a strong proposition. But what would have happened in the NEC if its members did not believe that the ANC would split automatically if Zuma were removed? What would have happened if ANC MPs did not believe they would not have been able to elect a new president if they had voted to remove Zuma during that parliamentary vote in August.

But mere survival surely does not necessarily translate into the ability to anoint your successor.

And finally, there are the actions of Zuma himself. More and more, it appears his aim is to disrupt the ANC and the state, rather than to try to win arguments through political power. His actions in getting his own individual legal opinion on the KZN ruling in what is surely defiance of the NEC is a case in point. This is an issue that could lead to the final split in the party, and he is happy to be a part of that process, to almost inspire a split. The same is true in government. Zuma has failed to appoint the new SABC board, despite the fact that its nominees have been approved by Parliament. This is not the action of a person confident of their political power, it is the action of someone who is trying to disrupt, as that is the only way to stay in power. Someone who is confident of their position is usually happy to play by the rules, someone who is not, breaks them. This is surely a sign of desperation.

Amid all of this, however, it should not be forgotten what the conference is about. It is not a fight for the hearts and minds of delegates, and never was. It is about the ability to control which delegates actually go. While the ANC’s official nominations process is now open, the branch audit process is not. And it is what we cannot see that makes this contest so difficult to predict. DM