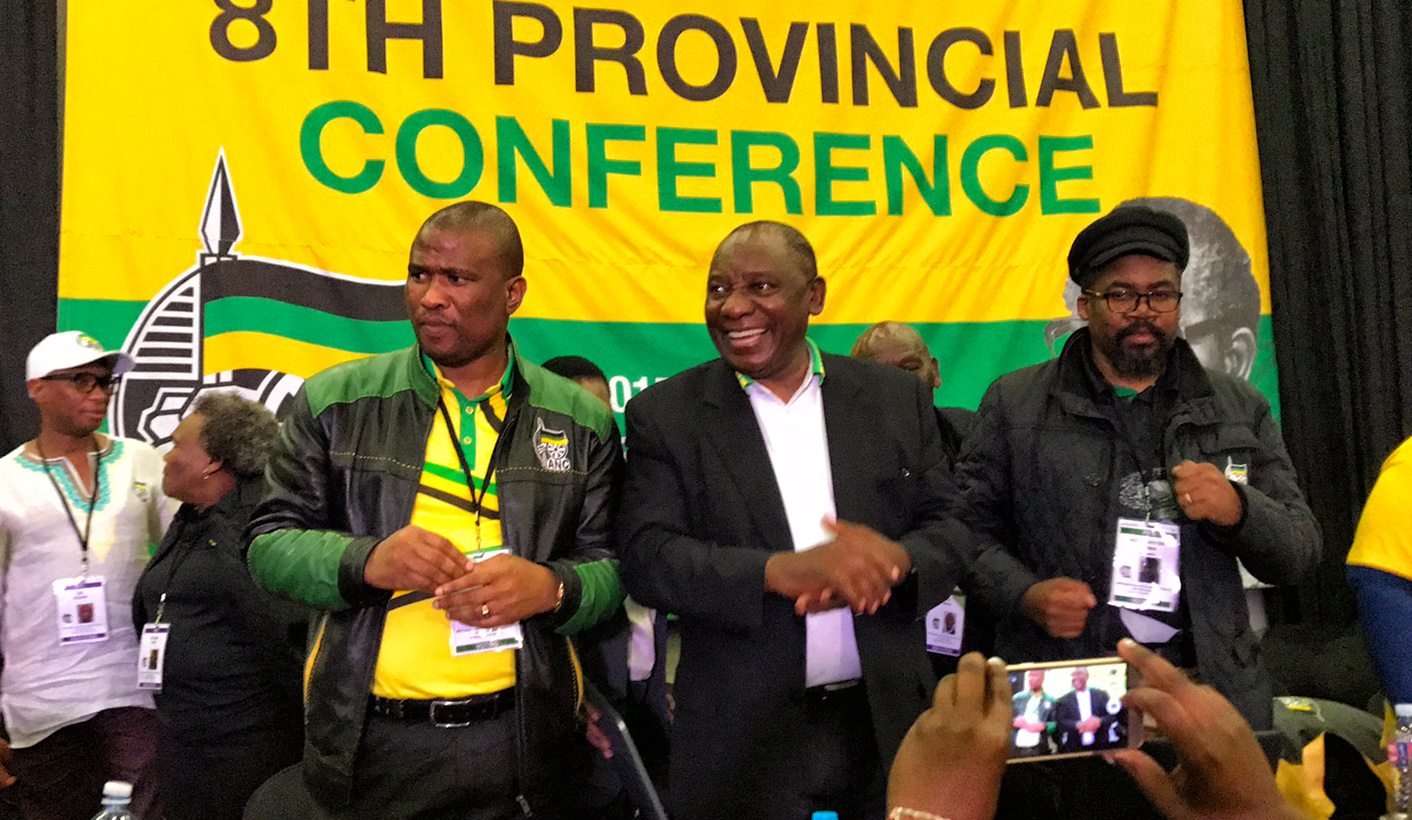 It was a good weekend for supporters of the ANC Deputy President Cyril Ramaphosa after his camp scored a major victory in the Eastern Cape. It was a not-so-good weekend for the ANC as a whole, however, as the blood that was spilt on the provincial conference floor attested. The “outside interests” blamed for this could be closer to the centre than is possible for the organisation to handle. By CARIEN DU PLESSIS.

If Deputy President Cyril Ramaphosa was distressed by what happened over the weekend at the International Convention Centre in East London, it didn’t show on his face.

He and his supporters got the outcome they were hoping for at the provincial conference – former provincial secretary Oscar Mabuyane was elected overwhelmingly as chairperson – but they probably hoped for a less painful process.

The conference was characterised by severe physical contestation – chair-throwing, sing-offs, unofficial “delegates” being bused in, and overnight sessions – with eight ending up injured in hospital.

In the end, out of the 1,706 “delegates” registered, only 906 remained behind to vote for new leaders. The almost 45% that left for a parallel conference in the East London City Hall appeared all to have been supporters of either Eastern Cape Premier Phumulo Masualle, former contender for the secretariat Andile Lungisa, or presidential contender and ANC MP Nkosazana Dlamini-Zuma.

By the looks of it, the balance of support in the province was similar to 2007, when President Jacob Zuma won the ANC’s national conference in Polokwane.

The Eastern Cape then was supposed to have been former president Thabo Mbeki’s stronghold, but strong campaigning by Zuma’s supporters, especially in big rural regions like OR Tambo around Mthatha, meant that with about 40% of the province’s support the scales were tipped in Zuma’s favour.

Of course, at the time KwaZulu-Natal was also a lot more united than it is now, despite what Mbeki’s people had journalists and themselves believe in 2007, with Zuma enjoying stronger than expected support in many other provinces.

Fast-forward a decade, however, and Zuma’s camp went into the Eastern Cape conference this weekend limping on several fronts, particularly in KwaZulu-Natal, where a court recently ruled that the 2015 provincial conference, where Dlamini-Zuma’s main campaigners and cheerleaders were elected, was unlawful.

A Sunday newspaper report about discussions during a routine national executive committee (NEC) meeting this weekend in Pretoria – which went on at the same time as the Eastern Cape conference – seems to indicate that Zuma and his supporters lost the important psychological battle to appeal this ruling.

On top of this, some of the provinces Dlamini-Zuma had counted on for support earlier in her campaign, such as Mpumalanga, now seem divided, while the Free State and North West also face severe challenges and the support for her appears fractured.

Ramaphosa made a point that the national executive committee members “are working extremely hard” to make the conference happen and that they compiled a “fairly detailed report” on what happened – one that will be presented to the NEC and the national working committee. This means the prospect of a successful court challenge is much smaller than, say, in KwaZulu-Natal, where things went ahead against secretary-general Gwede Mantashe’s wishes.

Despite threats of a court challenge, by the time the conference closed, the “losing” side seemed to have abandoned the idea.

Despite “losing” (they didn’t technically lose as they left before taking part in the vote and after realising that the majority of delegates were cheering for Mabuyane), the side didn’t do badly. By Saturday morning, before the walk-out, the Mabuyane crowd predicted in private WhatsApp messages that they’d get 75% of the support. This was obviously exaggerated campaign grandstanding, and 55% is a long way down from that.

Ramaphosa, in his closing speech – even before the conference started, organisers let slip that he’d be the one to speak because they expected a win for his camp – called for unity. As if to rub things in, he extended a greeting to alliance leaders and traditional leaders in attendance – labour federation Cosatu and the SA Communist Party no longer appear at events where Zuma is present.

He spoke as much to those inside the ANC as those outside – as if on an early campaign rally for 2019, and speaking to those in the party who reckon he, much better than Dlamini-Zuma, could save the party from electoral defeat.

The chair-throwing and fights that were shown on television and social media, he said, “is not the behaviour that is expected of the members of the ANC”.

Allowing violence as a way of resolving differences “is what puts the ANC into disrepute”, and going to the courts was no real solution either. The party should learn to deal with its own problems, he said.

“The real tragedy is that the ANC remains divided and today we are trying to pick up the pieces and unite the ANC,” he said. “The ANC in the end becomes the victim. The ANC becomes the one that is more injured than anyone when healing is necessary,” he said.

Rather than celebrating victory, the winning camp should work at uniting the party, he said.

The party could not unite the country when the party itself was divided. A laudable message, but some of Masualle’s supporters would call this ironic. Masualle has been credited with uniting the Eastern Cape for the just over seven years that he’s been chairing. This is evidenced by the fact that the party’s 2013 conference did not have the same degree of havoc as this weekend’s – although admittedly it didn’t take place in a highly contested national conference year either.

Some within the party say Mantashe was planning to use Masualle – who flip-flopped on his support for both Dlamini-Zuma and Ramaphosa – for his unity project, but that his ticket was “hijacked” by Dlamini-Zuma supporters like Lungisa.

The test could possibly be whether Masualle remains premier until his term ends in 2019, or whether the newly elected Eastern Cape ANC leadership replaces him with a sympathiser, as happened in KwaZulu-Natal after the 2015 conference.

Also, there is the factor of Lungisa.

Party spokesperson and NEC member Zizi Kodwa blamed “outside interests” for the chaos seen at the Eastern Cape conference. Some might think he is referring to state capture or perhaps the Gupta family, but the former ANC Youth League spokesperson must know it’s much closer than that.

Kodwa was part of the project that set up the league’s network that helped Zuma come to power in 2007. Even now, the league is a useful campaign tool for Zuma’s preferred successor, Dlamini-Zuma. Note, for instance, the way it is allowed to speak out in favour of Dlamini-Zuma nationally and in KwaZulu-Natal without strictly being subjected to the same discipline as ANC leaders themselves.

Even though the provincial youth league was disbanded a year ago, and even though he’s too old on paper to be a leader, Lungisa’s name has been rumoured as one of the main instigators at the conference. A few months ago he enjoyed Zuma’s overt support to be elected as Nelson Mandela Bay regional chair, but was removed from the position shortly after by Mantashe because it was against party rules for a PEC member to stand in the region.

Lungisa’s luck was even lower this time, but he had to try, and try he did. His future, and the future of many others in his camp, was at stake. DM

Tabelo Timse for amaBhungane • 6 hours ago