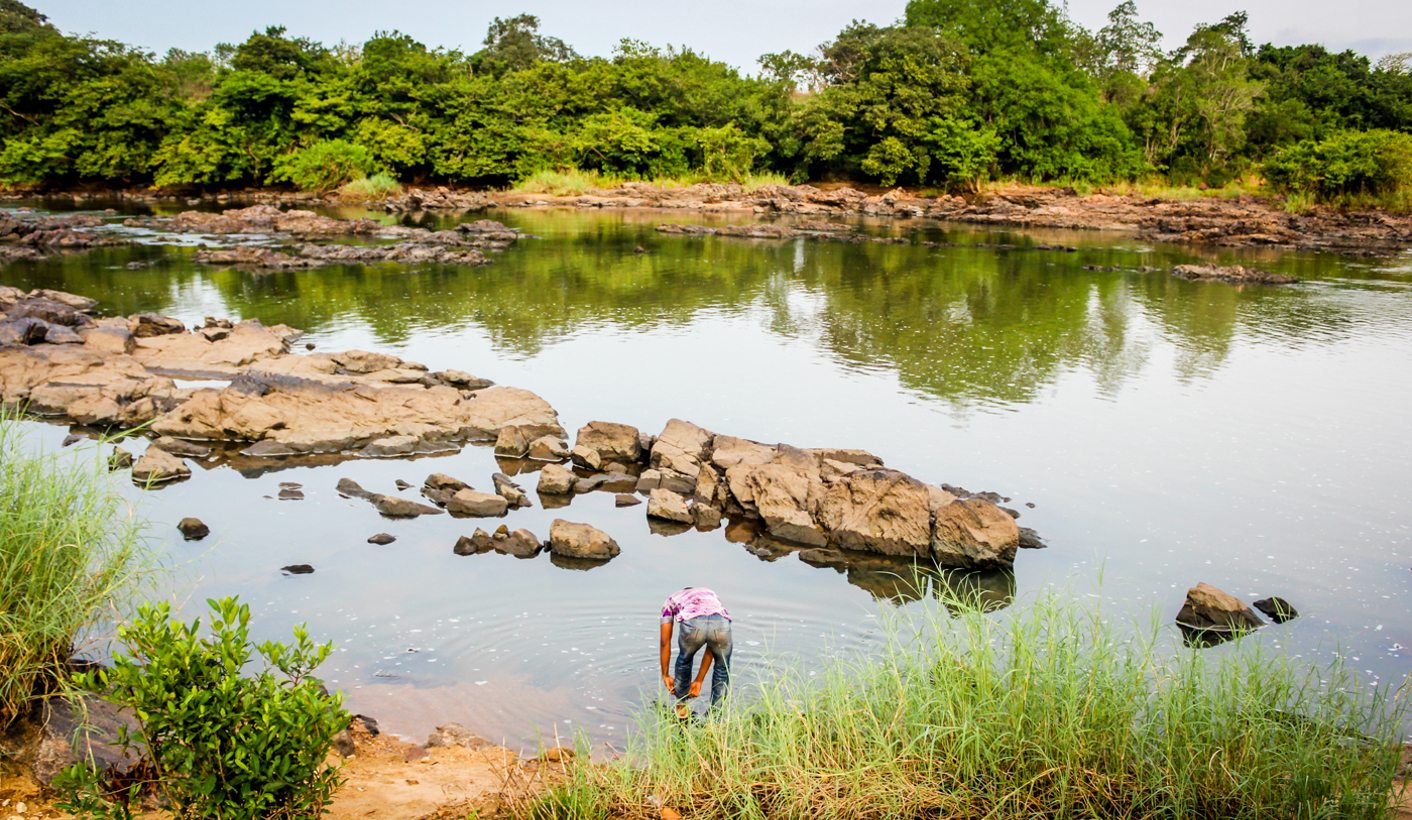 The embattled Adjarala dam project has been in the works for over a decade, but many locals still don’t have power. By KOSSI ELOM BALAO.

Tonin Emmanuel works as an engineering office manager in Anié, a village near the centre of Togo. In May, a power blackout plunged nearly his entire neighbourhood into darkness for over a month.

“Because we do not have electricity we can’t keep up with what’s happening. I feel like I’ve been isolated from the rest of the world,” he says, adding that it’s affecting his business. “To charge my phone battery I must walk a few kilometres to go to a friend’s house which has electricity.”

When he finally checks his phone, he has missed calls — often related to work. “I lose money to feed my family because of the lack of power,” Emmanuel says.

The lack of power is a big problem in Togo and Benin, two small countries in West Africa. Rural access to electricity in both countries is about 16% and the level of poverty is high. Without substantial infrastructure, they import more than 80% of their electricity from neighbouring countries like Ghana, Cote d’Ivoire and Nigeria. But that dependence could be coming to an end.

After a political struggle that lasted almost 10 years, Togo and Benin agreed to launch a joint project, the Adjarala hydropower station. Currently being built on the Mono River, which serves as a border between the two countries, it will be 40 metres high, have a reservoir that is 3.7 kilometres long and generate 147 megawatts of power. Despite serious delays and environmental concerns, the project represents hope for millions of people living without electricity in both countries.

“Lack of access to electricity is a serious problem for us,” says Emmanuel. “I hope that once the dam is completed, my family will not face this problem again.”

Troubles from the beginning

By 2004, Togo and Benin had committed to building the Adjarala dam but a disagreement between the Togolese and Beninese authorities over the terms of financing took years to resolve. Then, in 2009, the Benin Electricity Corporation (CEB) signed a contract with the Chinese company Sinohydro to build the dam for for approximately $388-million.

Still needing to raise more money to get the project off the ground, in 2013 they turned to international donor organisations, including the World Bank, African Development Bank, and others, for funding. These organisations expressed initial interest in financing the project, seemingly until the United States began to oppose support for large new dams worldwide. Ultimately, the donor organisations did not fund the project.

And then, on 21 December, 2015, the two countries found support. Project finance agreements were signed between the Governments of Togo and Benin and China Exim-Bank for an amount of $551.08-million. Things seemed to move quickly from there: on December 27, 2015, the foundation stone was laid in Aplahoué, a town about 100km north-west of Cotonou, the Beninese economic capital. Construction was slated to begin in March 2016 and the project was scheduled to take four years to complete.

“The Adjarala dam will allow our countries to meet their energy needs in the short term, and therefore to limit imports,” said Marc Dèdèriwè Abli-Bidamon, the Togolese minister of mines and energy, when the foundation stone was laid.

Just when it seemed the project was finally moving forward, in December 2016, Sani Yaya, the Togolese minister of economy and finance, told parliament many government projects would be suspended due to “a lack of financial resources.” Adjarala was one of them.

In the aftermath, rumours circulated concerning the project’s suspension. But any questions about whether the project would move forward were answered on 23 January, 2017. Dana Nadjindo Djato, the head of the Moyen-Mono district in Togo, and Christophe Mègbédji, the head of the Couffo district in Benin, went to the Adjarala hydroelectric dam development site to plant the flags of their respective countries alongside China’s.

During the event, the Chinese representative in charge of the project, Yan Zhongkui, declared that “the Chinese technicians are proud to have the support of Togo and Benin and intend to work to improve living conditions of both countries”.

Does anybody know what’s happening?

With so many false starts and conflicting information, I wanted to see what is happening with the dam now. In June 2017, I travelled from Togo to the Aplahoué region, where the Adjarala dam is being built.

The dam is located in the heart of a vast savanna landscape that stretches as far as the eye can see. It’s impossible to get lost — as I drive down the road there are several signs marking the way. I pass a little unpaved road where farmers are cultivating their crops and then I arrive at the site.

The entire site is sandy and I can see several machines operating. The workers wear yellow helmets and seem to be under the supervision of Chinese personnel who go around the site giving people directions.

A Beninese worker at the construction site talks to me but won’t tell me his name. “Due to the lack of finance, many workers, around [a] hundred, have been fired,” he says, adding that the situation has slowed progress on the project. Another labourer who also requests anonymity says he is working without a contract. He says that there has been theft of equipment on the site.

The local authorities in Aplahoué are very discreet about information related to the Adjarala dam. They agreed to an interview on the condition that I receive accreditation and authorisation from the High Authority of Audiovisual and Communication of Togo — which is largely controlled by the state — before granting me the interview. I could not get accreditation. I did not receive a response from the Secretary General or the Mayor of Aplahoué. The Beninese Minister of Energy sent me a message promising that he would call me back, but I have not heard from him since.

The impact on community

Donatien Tchogo, a young Beninese motorbike driver, has been waiting for power for a long time. “My family and I have lived in the dark for 30 years. We have never had access to electricity,” he says. Seemingly the only option for people like Tchogo is to buy a generator or install their own solar panel, both of which are expensive options.

This dam is seen by many as critical for the development of the region as it will generate power, create jobs and reduce poverty. However, the dam has massive environmental impacts. “Approximately 21,000 people (3,000 families) will be affected, including 12,000 people, or 1,800 households, in Togo and 9,000 people, or 1,200 households, in Benin,” according to an official document about the project. Agricultural land will be flooded and people will be displaced.

The Beninese and Togolese environmental agencies conducted a joint environmental and social impact study in 2014 that they submitted to the Dutch Commission for Environmental Assessment (CNEE), which specialises in environmental studies of dam projects.

The CNEE cited climate change as a concern. “There is another concern related to the flow of the river Mono: all the climate models predict an increase in temperature. A higher temperature leads to evaporation and then the reduction of the river Mono’s flow.”

Despite all of this potential damage, Akondo Bileri, quality, safety and environment manager at the Electric Power Company of Togo (CEET), believes the project should move forward. “The Adjarala dam will only be able to resolve the energy crisis in Togo and Benin for a limited time because of the continuous growth of the population and electricity demand.”

The new Beninese President, Patrice Talon, agrees that the country needs more power to keep up with growth. In his year and a half in office he has succeeded in installing several thermal power, solar power and biomass stations. But Benin dreams of producing over 600 MW by 2021 and is not willing to relinquish the construction of the Adjarala dam.

I spoke with dozens of people in the rural regions of both Togo and Benin. None raised concerns about the environmental or other negative impacts of the project. Instead, they expressed frustration that they are suffering from a lack of access to energy.

For Donatien Tchogo, there’s no doubt the dam will solve his power problems. “I really want the dam to be built. It’s actually our only hope to solve the energy crisis we’ve been facing for many years.” DM

This content was produced with the support of the Access to Energy Journalism Fellowship and Discourse Media.

Kossi Elom Balao is a West Africa-based bilingual journalist specialising in political and environmental issues. He began his career as a reporter at the University of Lomé’s student newspaper in Togo. He worked his way up in journalism, serving as an editor at five different newspapers. He is currently an editor of three new portals: Ghanaweb, Cameroonweb and Wayeno (a news portal based in Togo). In 2015, he was awarded first place in the Local Heroes Journalism Competition organised by Deutsche Welle.

Photo: A view of the Mono River where Togo and Benin meet and where the Adjarala Hydropower station project is located. Photo: Kossi Elom Balao