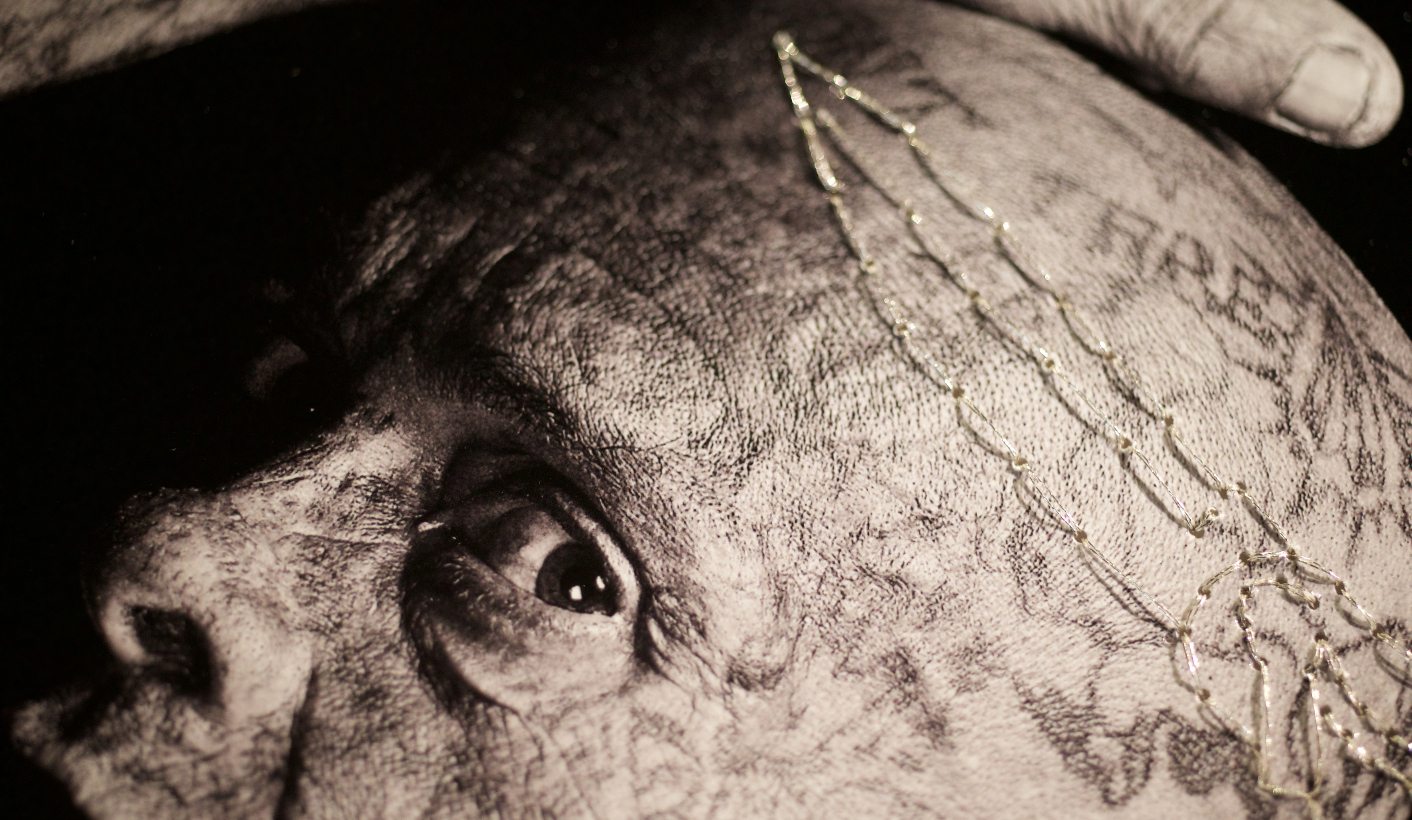 Internationally acclaimed tattoo artist Manuela Gray is heading to her home town, Cape Town, with a new fine art exhibition that tells the story of the Number prison gangs. Running through the narrative is a language she speaks well, the language written on the skin – tattoos. By MARELISE VAN DER MERWE.

Manuela Gray began her life drawing. She started on walls, furniture, and anything she could get her hands on. She ended up tattooing, eventually opening Cape Town’s legendary Wildfire Tattoos. Pop culture factoid: a highlight was tattooing Queen’s Roger Taylor. Ink on skin seemed to choose her, she says.

But she also exhibits as a fine artist, and her next exhibition is opening at the Southern Guild gallery in October. The Number, which comprises a film documenting the history, personal journeys codes and body markings of South Africa’s Number prison gangs, also includes prints, a book and a series of hand-stitched photographs. But the story her exhibition tells is through a different medium: the tattoos – a narrative drawn across the members’ bodies.

DM: Tell us a little about yourself.

Manuela Gray: I began life constantly drawing over walls and furniture, progressing eventually to bodies. I studied and worked in film, and have meandered through painting, sculpture, technical drawing, dressmaking and the adventure of life, ultimately arriving at ink on skin, which seemed to choose me. Tattooing is both the coming together of all my visual ideas, and the look-out point from which my art is thought.

Tell me more about The Number project – how you came to do it.

I had always held an interest and fascination with the body markings of the Number gangs. I became obsessed with the seeming simplicity and brutality of the marks, and the very real power and secrecy they held.

What was the most significant part of the project for you?

The filming with Turner, Isaac, Jamut, and Michael was very intense and immersive. That these guys would let me into their world, share their codes, their thoughts and memories was profound, and I feel indebted to the trust they have afforded me as an artist.

Photo: Image from the exhibition by Manuela Gray

What did you find most challenging?

A project like The Number and the methods I employed from film to artwork are intricately detailed, and technically challenging. Surrounding myself with the right team to get to the imagery I wanted was a challenge and a wonderful adventure.

Can you elaborate on the techniques you used? Why did you opt for hand-stitched photographs, for instance?

We always knew that we wanted to extract stills from the motion footage we produced for the film, so we shot with high resolution cameras and slow motion to allow us to extract the imagery we needed.

I have always stitched and grew up in a long line of women stitching, so this has occasionally formed part of my artistic pursuits. In The Number I was particularly drawn to this meeting of my personal history of stitching… an echo of tattooing, with the disruption of the surface of the prints.

I was also drawn to the inevitable collision of people’s gender expectations with “stitching” and its engagement with the world of The Number; the explosion of these two worlds, so the medium was not accidental. The engaging with and breaking of the physical surface, and with people’s expectations, has always been part of my art.

The artwork Paradise Lost combines three images from three numbers gangs, the 26s, 27s and 28s. Tell me a bit about the concept behind it?

Cinematographer Brendan McGinty and I had always spoken about the idea of a triptych for the exhibition, born partly from our mutual interest in Renaissance religious iconography, and the tortured paintings of Francis Bacon. Given the inter-reliance of the three gangs to The Number, the 26s, 27s and 28s seemed perfectly fitting to the medium of a triptych.

When we were sorting through the imagery from the motion and stills shoots and preparing for the works I would go on to stitch, we stumbled on the three images that have now become Paradise Lost. We were immediately struck by the juxtaposition of the images and their evocation of wings, on either side of the back of the 28.

The etchings that Gustav Dore did for John Milton’s Paradise Lost seemed perfectly echoed in the triptych we had created. Moreover, the resonance with Milton’s Satanic anti-hero seemed appropriate to The Number’s own protagonists – their negotiating of good and evil, their “owning” of power, and the darkness of The Number. The three snakes I stitched across these further engage with Milton’s epic poem, using imagery prevalent in the art of The Number.

You’re using funds from the exhibition for training and other assistance. What are the details?

I got to know the guys when filming, and learned their methods of tattooing in prison and after prison. I felt obligated to educate them in the ways of sterilisation and better technique. These conversations, and becoming aware of the non-existent opportunities for ex-gangsters in employment, as well as a desire to elevate tattooing in the areas they live, gave birth to our initiative.

While you were working on this project, did anybody really stand out? If so, why?

They are all deeply complex individuals: their stories, their situations, their lives. Seeing tattooing from a privileged, art-school educated perspective, it was an incredibly eye-opening journey in which each person played a significant part and continues to do so. Their tattoos are a language of the downtrodden.

What’s your go-to soundtrack when you are preparing for a big event, like a gallery opening? Or any rituals you follow?

I am extremely superstitious, especially with numbers, double numbers in particular.

My usual disposition is one of chaos, so one could assume I am ritualistic only in leaving everything to the last minute, accompanied by the sounds of The Brian Jonestown Massacre, the Kills, Motown, Run the Jewels, Black Rebel Motorcycle Club, Al Green, Etta James, Pantera, Allah Las, Handsome Boy Modelling School… too many to mention!

Looking back, what are some of the moments that really stood out in your life or career?

Looking back, my most profound memory was the sense of freedom in being independent, and the inspiration and support from my parents. This led to my often choosing unusual, non-conformist paths to achieve my goals.

Their love for travel armed me with an insatiable desire to see the world, and travel has definitely played an integral role in my life and will continue to do so. From first learning tattooing on a surf trip to Europe, to being the first South African to travel to tattoo conventions all over the world. And now, to opening businesses in London and LA. Although while travel is high on my list, Cape Town is and always will be my home. I have been deeply involved and dedicated to elevating our tattoo industry over the years. I am the owner of Wildfire Tattoos and the Cape Town International Tattoo Expo.

Anything important you want to say that I have not asked you about?

This would not have been possible without the hugely talented Brendan McGinty, cinematographer, photographer and producer, as well as the amazingly talented Antonia Steyn. Also the support of Jeanette de Villiers, Ground Glass and 16Oz studios, and editor Paul Gardner. Lastly, of course, Turner, Isaac, Joseph, Jamut, Michael and Raymond. DM

At a glance fact box:

My art-making extends to an interest in making knives, beautiful steel implements that break the surface of the world.

I love the ocean and surfing.

I make visuals which I perform live for bands and DJs.

I have just launched a jewellery range.

I have re-imagined and designed a new range of merchandise called Killer Queen for the band Queen.

Photo: A hand stitched image from The Number exhibition by Manuela Gray, courtesy of Manuela Gray. Catch the exhibition at the Southern Guild gallery from 13 October 2017.