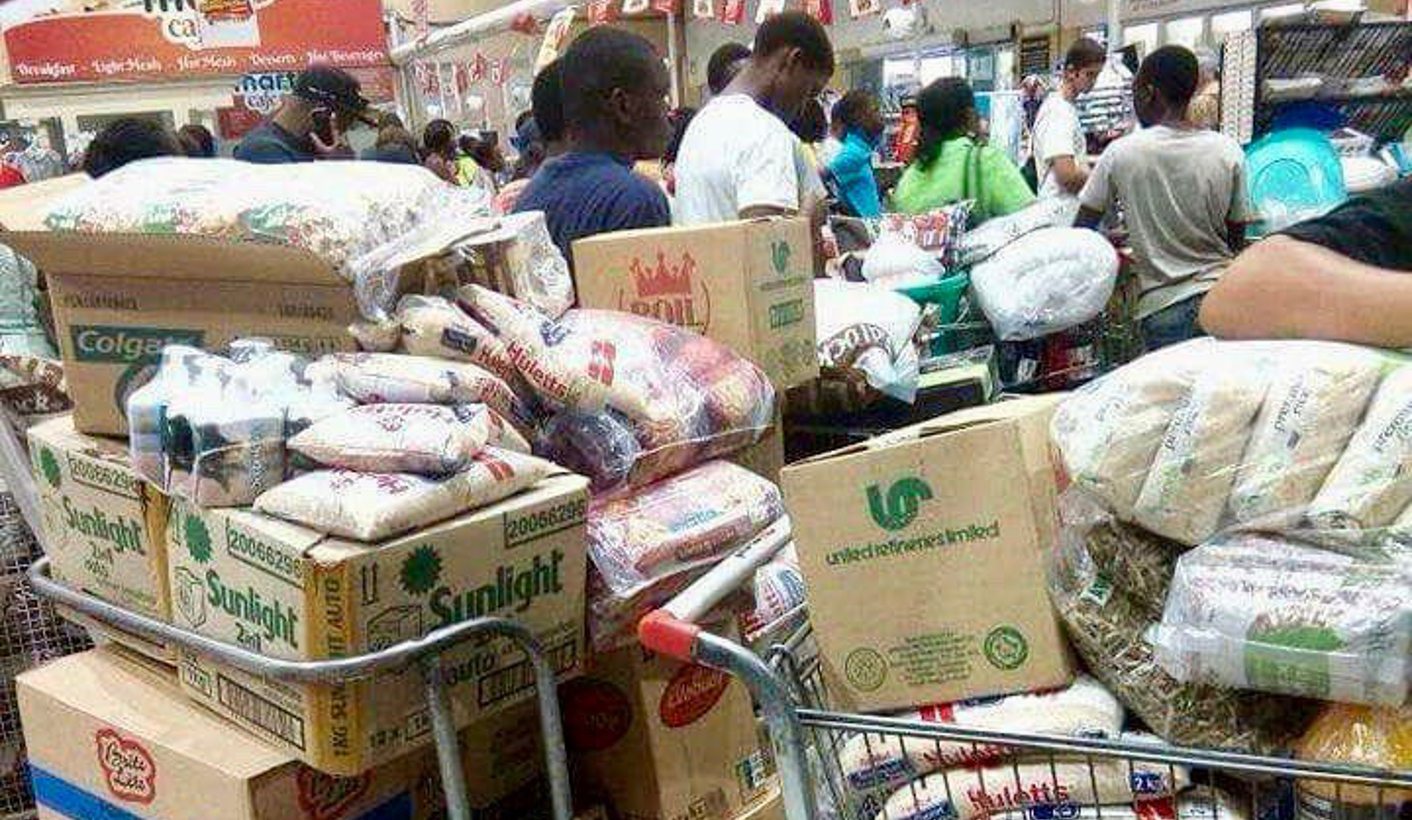 The bond note currency is blamed for the crisis. By GROUNDUP correspondent.

“I can’t take a chance – 2008 is back! These are the last tins of fish inside this shop,” says a mother of two pushing a shopping trolley with at least 80 tins of mackerel fish in a giant supermarket in central Harare. “The shop manager, a friend, phoned me to come and hoard the fish and stock it in my bedroom because by Monday the shelves will be empty,” says Vera [not her real name].

In 2008, inflation in Zimbabwe hit 231-million percent, according to The Guardian, and shop shelves were left bare. Panic buying has returned as prices for many items have rocketed in the last two weeks and people fear shortages. The price cooking oil has jumped from around $3 per litre to $5 (all prices in this article are US dollars) in just one week. In Harare, fuel stations are running out of petrol.

Vera is not alone. Queues packed with frightened consumers could be seen in supermarkets with trolleys piled high with basic supplies, as consumers and black market speculators vied to secure goods.

“My $500 bond notes wage has flopped to just $200 in real US dollar value. This in just one week. I’ll soon resign from my job and head down to Johannesburg to find something else to do,” says Trymore Joka, a secondary school teacher. Twice a week, he has to abandon school to join bank queues for scarce bond note withdrawals.

In 2008 hundreds of teachers abandoned their posts and crossed the border into South Africa, says Obert Masarure head of the Zimbabwe Rural Teachers Association.

“Sadly, businesses hike prices on to the citizen in order to avoid closing down operations,” says Sifelani Jabangwe, head of the Zimbabwe Confederation of Industries body.

But while the crisis looms, there is joy among the illegal currency traders on the Harare black market. They are raking in the profits once again. “We are back in business!” says one currency trader at Road Port Terminal, where buses filled with importers depart hourly from Harare to neighbouring South Africa. “We are selling real US dollars for a premium profit of 60% in a day! It’s simple. I give you one real US dollar, you pay me 1.60 bond note dollars. Company executives, nurses, fuel boys all come to us. I just left my security guard job to take advantage of these latest hardships,” he says.

“Who’s smuggling this freshly printed money to street traders?” demanded John Silo, a carpenter who had spent five hours in a petrol queue only to be told the service station was no longer accepting bank cards but only US dollars in cash.

In a heated radio interview with the local Capital FM radio station, finance minister Patrick Chinamasa said, “We are not responsible for this. The economy is littered with undisciplined people. There are corrupt elements who are hoarding foodstuffs to trade on the black market.” DM