Book Review: Redi Tlhabi’s ‘Khwezi’ reminds SA what was lost in the fire 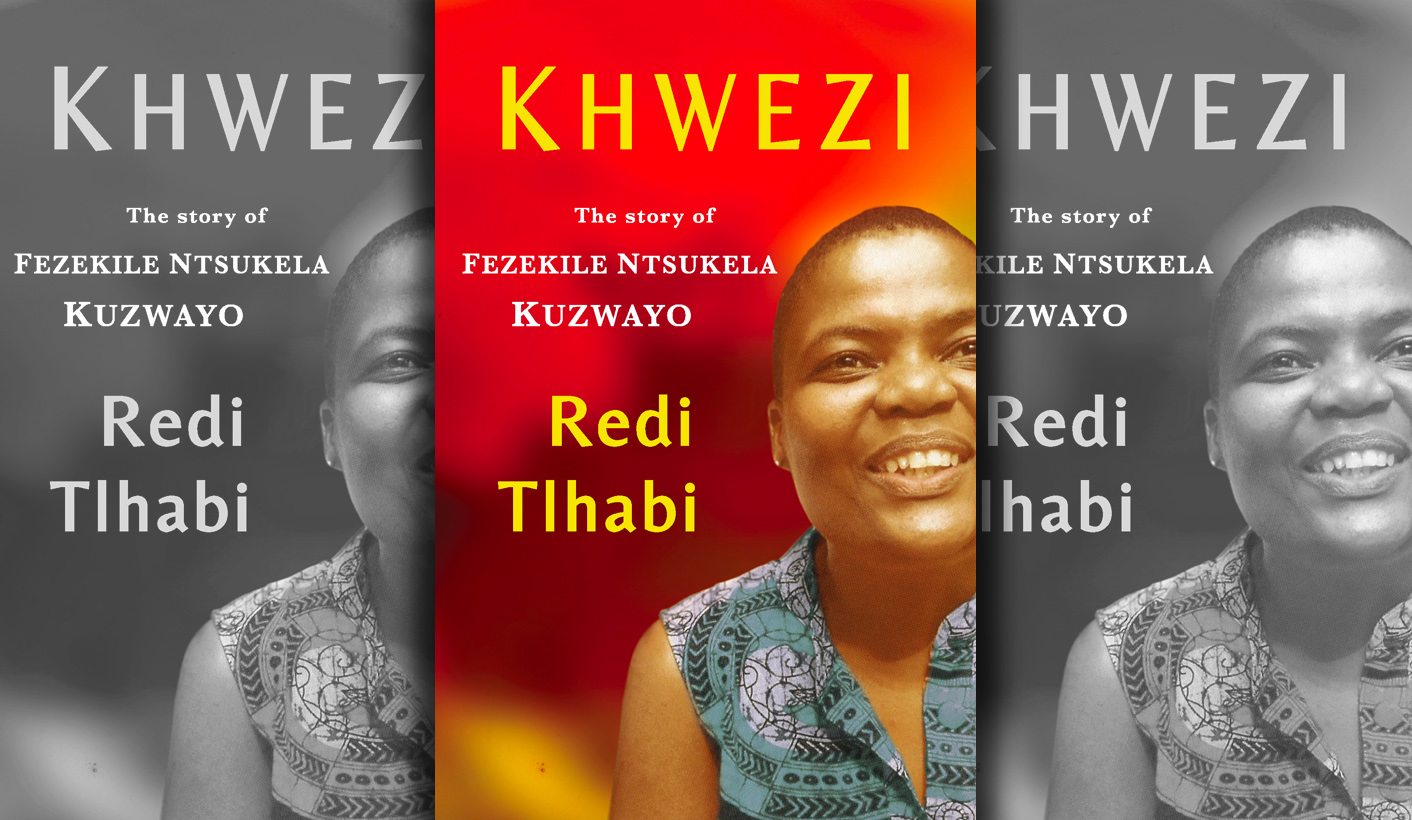 Broadcaster Redi Tlhabi’s new book ‘Khwezi’ – an account of the life of President Jacob Zuma’s rape accuser Fezekile Kuzwayo – is a sobering read from any number of perspectives. Snippets published in the media thus far risk reducing the book to a few further accounts of Zuma’s predatory behaviour towards women, or the behaviour of his allies in attempting to manage his actions. This is effectively the opposite of what Tlhabi’s book sets out to do – which is to reclaim the power, and the narrative, of a young woman at risk of being erased by politics and history. By REBECCA DAVIS.

“I wanted her to know that I was writing, unapologetically, as a feminist who believed her”, Redi Tlhabi records at the beginning of her new book Khwezi: The remarkable story of Fezekile Ntsukela Kuzwayo.

Tlhabi is referring to the event which would hurtle Kuzwayo into the South African spotlight – albeit under an assumed name – in the most brutal way possible: the rape Kuzwayo alleged she had suffered at the hands of Jacob Zuma.

But those hoping that Tlhabi’s book will give further salacious details about what really happened at Zuma’s Forest Hill home on the night of 2 November 2005 should look elsewhere. It is not Tlhabi’s purpose here to rehash the disputed events, or even dwell in great detail on the 2006 rape trial. Khwezi is about restoring to Kuzwayo what was taken from her over a decade ago: her name, her identity, and her life.

It is not easy to write the story of someone who has never previously trusted the public with her narrative. It is even less easy when that person dies in the course of the book being written. It gives yet another dimension of tragedy to Kuzwayo’s story that she would pass away from AIDS-related complications just months before the book was completed.

Tlhabi writes that Kuzwayo had intended to approach the book’s publication as a kind of rebirth into public life. She was ready to attend book launches with Tlhabi, and to be named and acknowledged fully in public in a way that she had rejected since the trial and its terrible aftermath. But it was not to be.

All we have, now, is Tlhabi’s deeply compassionate and thoughtful account of Kuzwayo: the woman who has previously been a kind of blank cipher at the centre of one of the most significant – and shameful – episodes in recent South African history.

Tlhabi is no hagiographer. Khwezi does not glorify Kuzwayo, or make a martyr or hero of her. Tlhabi writes candidly of a woman who could be maddeningly flighty, unsure of what she wanted and prone to squandering opportunities. Kuzwayo comes across as by turns exuberant and troubled; often depressed but capable of easy joy. The Fezekile in Tlhabi’s pages is garrulous and funny; an over-sharer, but hard to pin down; impulsive and a poor planner. “One fool at a time” is her wry catch-phrase. She is complicated, and human.

But Kuzwayo’s life also provides an opportunity for a wider view: about the effects of the Struggle on families and relationships in particular.

Kuzwayo’s father, Judson Kuwazyo, was an ANC comrade of almost equivalent stature to his close friend Jacob Zuma. Like Zuma, he was from KwaZulu-Natal. Like Zuma, he was sentenced to a 10-year jail term on Robben Island – at the same time as Zuma. Such was his influence that Kuzwayo had an MK unit named after him – which Zuma would go on to lead. Kuzwayo served as the ANC’s chief representative in Lesotho, Swaziland and Zimbabwe. When he died, Tlhabi notes, President Robert Mugabe sent a personal note to Oliver Tambo to express his regret.

Yet today Judson Kuzwayo is virtually unknown, outside of those with long memories intimately connected to Struggle circles. Partly that is attributable to his early death in a car accident in 1985, aged 43. But it is equally a reflection of how only certain comrades have prospered and been lionised in post-apartheid South Africa. Both Fezekile and her mother, Beauty, expressed some bitterness to Tlhabi about the way in which the families left behind were treated in the Struggle.

Kuzwayo once told Tlhabi she thought her life would have been easier if it had been her mother who died in exile, rather than her father. “My family died fighting for this freedom and the movement does not really care about widows and orphans,” Kuzwayo said. When Kuzwayo died, funds had to be scraped together from well-wishers to pay for her funeral. Tlhabi records that her mother still lives in poverty.

Judson Kuzwayo’s early death allowed his daughter to cling to an idealised version of the man throughout his life – though she once speculated in her diary that he might have turned out like “the other uncles”. Included in that category, it is understood, was her father’s close friend Zuma.

Kuzwayo’s first experience of rape was at five years old. It would be the first of three childhood rapes in exile. Tlhabi does not shy away from chronicling the troubling prevalence of sexual assault in the liberation movement.

“The ruling party has, largely, been in denial about this, choosing instead a narrative that speaks only of the heroism and sacrifices of so many gallant comrades – a narrative that is true, but incomplete,” she writes. “The war against apartheid was fought on and across women’s and children’s bodies. Many paid the price.”

Later, Tlhabi discusses the veil of silence around the issue with a childhood friend of Kuzwayo’s who grew up with her in exile, Kimmy Msibi.

“There are things that happened, things that we did not talk about,” Msibi says. “It felt futile to report [sexual violence]. It was overwhelming. There were bigger things at stake and certain things had to be put aside.”

Kuzwayo’s childhood rapes would later be used as a perverse weapon against her in the Zuma rape trial, as lawyers sought to paint the picture of a young woman who was both psychologically disturbed and prone to sexual promiscuity. The decision to allow Zuma’s lawyer Kemp J Kemp to cross-examine Kuzwayo on her sexual history remains unforgivable, whatever your opinion of the trial’s eventual verdict. Tlhabi’s quotes from the trial transcript remind us just how egregious Kemp’s questioning was.

Kemp sought, for instance, to make the argument that Kuzwayo had had consensual sex as a five-year-old with a man in his 30s. Kemp is, of course, still Zuma’s lawyer to this day – most recently seen in the Supreme Court of Appeal dealing with the spy tapes issue for his client.

For any woman to go through the ordeal Kuzwayo had to endure on the stand and emerge still possessing the will to live is testament to her strength of character. But there is little doubt that the rape trial blighted the rest of Kuzwayo’s short life, ushering in chaotic years when she tried, and failed, to put down roots in safe houses in the Netherlands and Tanzania before returning to a still-hostile South Africa.

For the rest of Kuzwayo’s life, Tlhabi records, she was constantly afraid that she was being followed or watched. She agonised about her real name becoming public knowledge, and it is evidence of the great trust she must have had in Tlhabi that she wanted to co-operate with the broadcaster on a book.

“Fezekile Kuzwayo represented something much larger than the life of a young woman,” Tlhabi writes. “She was not just Zuma’s rape accuser, although that chapter should have been a salient one in the development of our nation. We should have learnt to interrogate the language of power. We should have walked away from her story with an understanding of the complexities of power relations and how they can destroy lives and contaminate the space for debate. We should have had a more cerebral and compassionate understanding about patriarchy as performed and lived by both the women and men who were intent on lynching Fezekile.”

What happened to Fezekile Kuzwayo should be a source of national shame. But in telling Kuzwayo’s story, and in considering the meaning of her life, Tlhabi has succeeded in restoring to Kuzwayo what was taken from her: her dignity; her voice; her name. DM