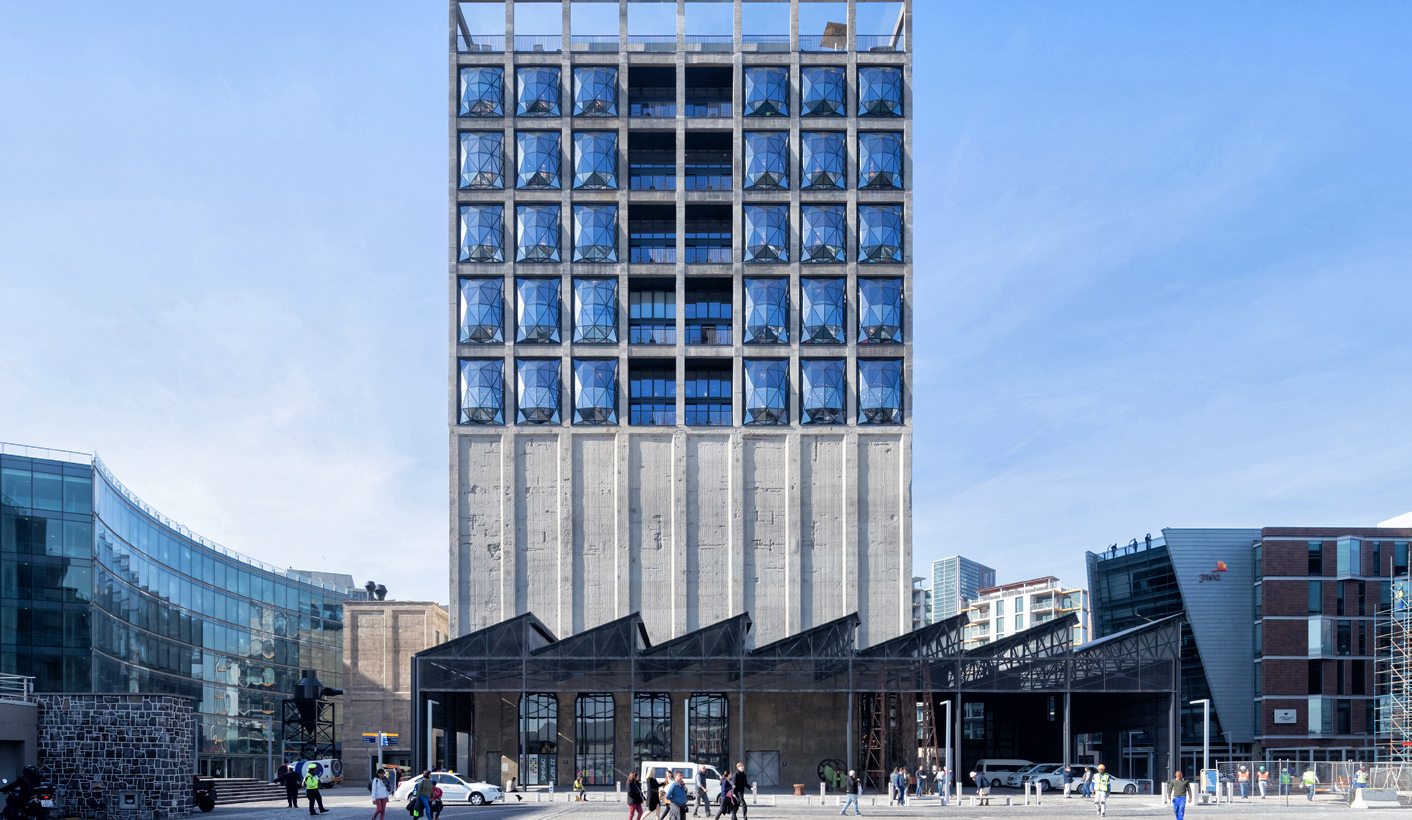 The past weekend saw the public opening of the Zeitz Museum of Contemporary Art Africa. A project unprecedented in its scale and ambition on the African continent, the museum was hailed at its opening as an “8th wonder of the world”. Attracting at least as much attention as the art it houses is the museum structure itself: a spectacular edifice carved out of existing grain silos. Supporters say the Zeitz Mocaa can spearhead a glorious new era for African art. Its detractors aren’t so sure. By REBECCA DAVIS.

On a blustery spring morning in Cape Town, what was once a disused industrial area next to the V&A Waterfront sang with life. The occasion: the ribbon-cutting ceremony of the Zeitz Mocaa (pronounced “zights mocka”), an art museum promising to be to Cape Town what the Tate is to London, or the Met is to New York.

Speakers at the event competed to produce ever-more hyperbolic metaphors to describe the significance of the day. “You are amongst the first to witness the writing of a new chapter in South Africa’s history,” V&A Waterfront board chair Elias Masilela told the assembled crowd.

Archbishop Desmond Tutu, in a rare public appearance, pretended to take a phone call from Nelson Mandela in heaven in which Tutu was told: “Yes! This is what we were fighting for!”

They were singing the praises of a building which was once the tallest structure in sub-Saharan Africa: a 1920s grain silo now transformed into a grand repository for African art under the vision of British architect Thomas Heatherwick. At a cost of more than R500-million, borne by the V& A Waterfront corporation – and by extension its investors, the currently besieged Public Investment Corporation – the silo has become what is certain to be one of the most photographed edifices on the African continent.

Heatherwick said at the opening that he deliberately did not want the building’s impact to be carried in its external frame, out of fear that people would arrive to take a selfie before it and then leave. Indeed, the magic of its interior is hard to predict from its exterior, dominated by the protruding “flies’ eyes” windows which actually belong to the luxury hotel seated atop the museum.

Step inside, however, and the hype is well-founded. Heatherwick has carved a breathtaking cathedral from an industrial storehouse he describes as being originally “filled with pigeon poo in quantities I’ve never seen before in my life”. Out of – in Heatherwick’s words – an “extraordinary, weird space made of tubes”, the British architect has created a soaring space which gives grandiose life to an equally towering ambition.

The ambition is that of Jochen Zeitz, the former Puma CEO who saw a once-ailing sports brand’s share price rise almost 4,000% under his stewardship. Now the German lives the life of a billionaire philanthropist – who just happens to have a passion for African art.

It is Zeitz’s art collection, built up since 2008 with the aid of South African curator Mark Coetzee, that provides the bones of the Zeitz Mocaa holdings – and which gained Zeitz the naming rights to the museum.

Hlobo is one of a number of big South African names on display, sharing museum space with Athi-Patra Ruga, Mary Sibande, Kendell Geers and Penny Siopis.

Photographer Zanele Muholi’s portraits are presented sparsely but effectively, with their minimalist positioning accentuating the works’ extraordinarily textured effect. A highlight is William Kentridge’s moving and powerful More Sweetly Play the Dance, a panoramic installation on the gallery’s second floor.

But by definition, South African artists can only provide a portion of the works on offer in a museum aiming to capture the zeitgeist (Zeitzgeist?) of an entire continent’s creative output. Other must-sees include Zimbabwean Kudzanai Chiurai’s provocative protest art and Swati artist Nandipha Mntambo’s reckoning with questions of gender and postcolonial identity. The museum feels vast and absorbing, mixing permanent exhibits with temporary installations; one could easily spend half a day there, or more.

Art critic Sean O’Toole has expressed reservations about the depths of the museum’s holdings, suggesting that there are “crucial blind spots in the collection”. This is, perhaps, inevitable in a museum with such an ambitious scope. Beyond this, however, there are rumblings of certain South African artists refusing co-operation with the museum when it comes to exhibiting their works – in contrast with the likes of Kentridge, who has been a staunch supporter.

Critics may also say that the museum is designed with the Instagram generation in mind, with an emphasis on forms like photography and fashion. But the Zeitz Mocaa team has made no bones about the fact that accessibility is a priority. This is not your granny’s art museum; by definition, its ambit is restricted to “contemporary” art and it is interpreting that brief quite literally.

Much of the criticism of the Zeitz Mocaa project up till now has seemed fairly vague and ill-defined. That it is “elitist”; that it too closely mirrors similar museums in the West; that it has not “engaged closely” with local artists and galleries.

It is hard not to feel that some of this comes down to parochialism, envy and snobbery – around a takkie salesman (Zeitz) having the audacity to present himself as an artistic taste-maker, and a glorified shopping centre (the V&A Waterfront) positioning itself as a home of fine art.

At the ribbon-cutting ceremony, Masilela called it like it is when he described the Zeitz Mocaa as “a museum in the heart of commerce”. Masilela clearly found nothing problematic in that description, but others will feel differently.

Critic Robin Scher points out that “Africa has always enjoyed a rocky relationship with the interweb of commercial and cultural interests we know as the art world” – perhaps best illustrated by the looted African creative products which fill exhibition spaces in the developed world.

Placing an African art museum in the heart of what is now the most expensive real estate on the continent may seem to some to be fundamentally at odds with what such a museum should signify. But the reality is that the Zeitz Mocaa is a corporate project – which is what has enabled its development on such an impressive scale. The Waterfront owns the building, and paid for its renovation. Corporate sponsors include Bloomberg, BMW and Standard Bank.

The museum does have an entry fee which, at R180 per adult, puts it beyond the budget of most South Africans. But under-18s get in free daily, and every Wednesday any locals – and anyone producing an African passport – is also granted free entry. For a private initiative – rather than a government-funded one – it is hard to see what more could be done to ensure accessibility while also covering running costs. It should be noted that even a state museum like the South African National Gallery charges an entry fee, albeit at a fraction of the Zeitz Mocaa price.

Other criticism levelled at the museum has included that white men (and foreigners) have been over-represented in the project’s construction and direction, giving it a whiff of neo-imperialism. Director Mark Coetzee has explained that all of the museum’s curatorial staff get a vote in exhibition decisions, however, and 25 curators will receive subsidised training at the museum annually.

Further charges against Zeitz Mocaa are concerning but currently inadequately substantiated. In an open letter on Artthrob in 2015, gallerist and scholar Matthew Blackman suggested that the “buying habits” of the museum were already skewing South African art markets.

“I have had disturbing conversations now with several gallerists who, I have begun to realise, are developing their stables purely to fit the buying habits of [Zeitz Mocaa],” Blackman charged.

It’s too early to tell how much weight these concerns should be given. It’s been pointed out that there is a possible conflict of interests in the fact that Coetzee is in charge of acquisitions both for the museum and for Jochen Zeitz’s personal collection, meaning that he may have an incentive to display certain works to raise their value for Zeitz. Coetzee has indicated that the terms of the museum’s agreement with the Waterfront mean that there is no obligation for the museum to display a particular number of Zeitz’s works, but it will remain to be seen how this works in practice.

But in other senses, the museum is already having a positive effect – at least anecdotally. A local gallerist told the UK’s Independent that more international curators were already visiting South Africa “because Zeitz has made them realise just how Eurocentric their collections are”.

Beyond this, the Zeitz Mocaa is certain to become a staple of tourists’ to-do lists in Cape Town – and with every justification. It would be churlish not to wish this impressive project well. DM