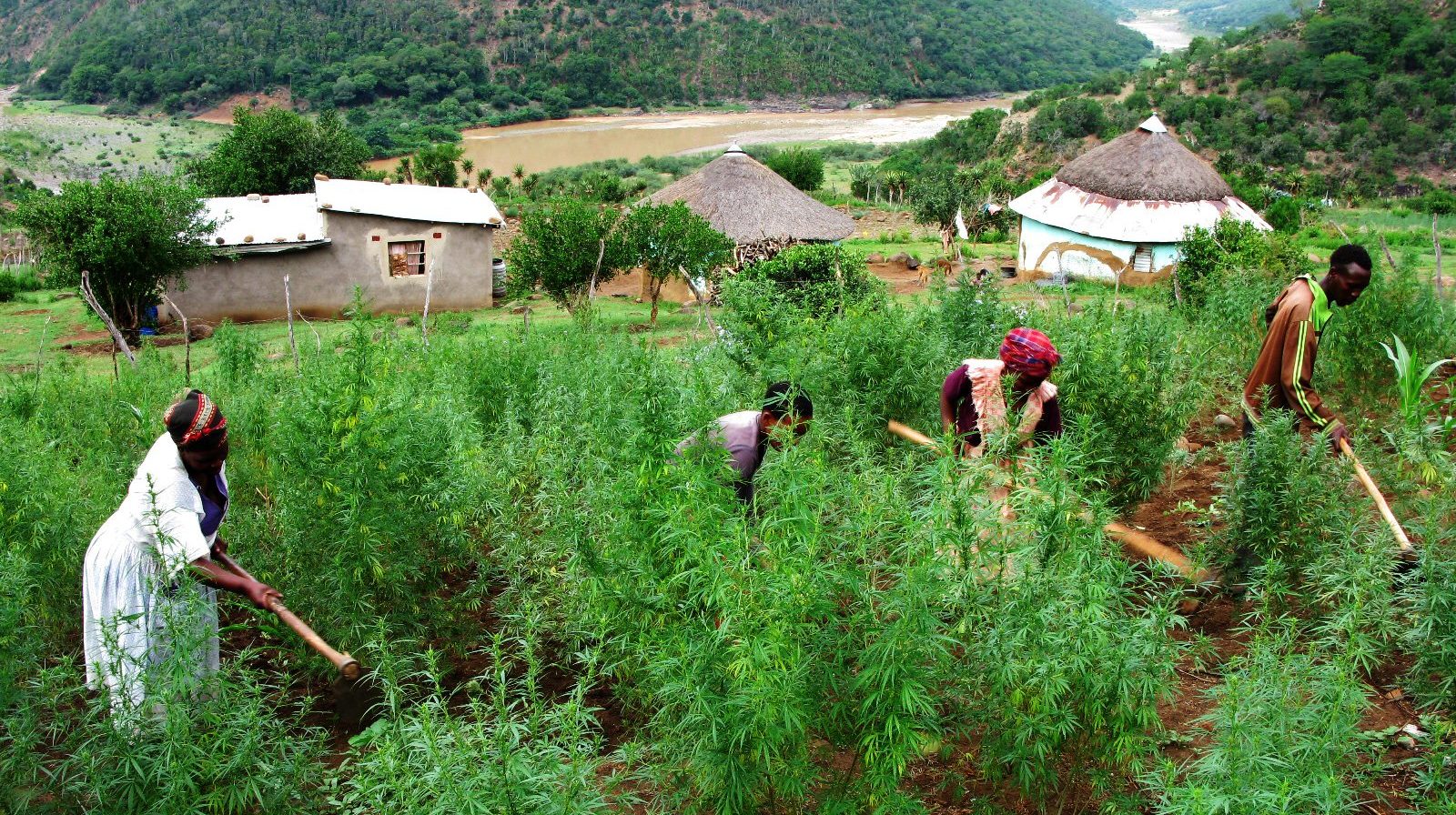 Dagga farming is one of the few forms of livelihood in poverty-stricken parts of the rural Eastern Cape. (Photo: Masixole Feni)

When marijuana farming is legalised in South Africa who will benefit? This is not just a hypothetical question. Right now, marijuana is being legally grown at scale by the House of Hemp in irrigated tunnels in the Dube Trade Port, north of Durban. This while the poorest of the poor face arrest and being sprayed with poisons for growing the same crop. By DAVE MARTIN.

For those of us working at the grass roots level in the deep rural parts of the former-homelands it is common to read claims that one or other “simple” intervention (e.g. title deeds) will unlock the potential of rural communities to uplift themselves out of poverty. These “silver bullet” interventions are generally proposed by people with very limited hands-on experience in rural communities and are depicted as being “obvious” or “logical.” The implication is that the government or other actors in the rural development space are then either not logical or have some ulterior motive as to why they are not implementing this “obviously” beneficial and transformative intervention. If these well-meaning, silver-bullet proponents made the effort to spend time in these deep rural areas they would see the flaws in their arguments and understand that if it was in fact so easy and obvious, it would have been implemented already.

However, with the above caveat in mind, there are moments in history when major changes in the economy or society open up new opportunities with the potential to transform economies for those countries that adapt quickly to gain first-mover advantage.

We face such a moment in South Africa right now.

The past few years have seen a revolution in the attitudes and laws regarding the use of marijuana for medicinal and recreational purposes in much of the world, including South Africa. It seems certain that within the next few years, the use of medical marijuana will be legal throughout the world and that the recreational use of marijuana will be legalised or decriminalised in a steadily increasing number of countries. It is now well known that recreational marijuana can be bought and used legally in Uruguay, Canada and eight states within the US. A number of other countries have marijuana legalisation processes under way. In South Africa, medical marijuana is in the process of being legalised and the Western Cape High Court recently ruled that parliament has two years to legalise/decriminalise marijuana for personal use at home.

Marijuana has long been grown in South Africa for the illegal market and the former-Transkei is famous as one of the major marijuana growing areas. At the same time, this region suffers some of the most acute poverty in the country. The rural Mbhashe Municipality where I live and work has 93% unemployment, 79% of people without access to tap water, 45% with no form of toilet (not even a pit latrine) and only 40% of the adults are able to read.

In desperation, farmers, often widows, risk their lives growing marijuana to feed their families. Many of them are sitting in jail right now for growing and selling the same substance that hipsters can smoke openly on Cape Town’s beaches and restaurant balconies. If these farmers survive the police’s reckless aerial herbicide spraying and escape arrest on the ground, then they sell their crops to middle men for around R1000 per kilogram.

The current price for legal marijuana in the Colorado wholesale market is R50,000 per kilogram.

So the question is: when marijuana farming is legalised in South Africa who will benefit? This is not just a hypothetical question. Right now, marijuana is being legally grown at scale by the House of Hemp in irrigated tunnels in the Dube Trade Port, north of Durban. This while the poorest of the poor face arrest and being sprayed with poisons for growing the same crop. If marijuana farming becomes a controlled but legal enterprise, then it is clear that South Africa’s mostly white, commercial farming sector will grab the opportunity to grow this high value crop and thus reinforce South Africa’s existing economic and spacial inequalities.

But it doesn’t have to be this way. The South African government could designate certain areas like the former-homelands as the only regions where marijuana can be legally grown. The beauty of this idea is that while most rural economic development interventions fail due to a lack of capital investment and skills, in this case the farmers already have decades of experience in growing the crop successfully. Government would merely need to supply the preferred seed in October and then open a handful of buying warehouses in the major towns during the April harvest season. And within less than a year, families who are currently surviving on less than R1,000 per month could potentially earn hundreds of thousands of rand. There is no other economic proposal anywhere that can offer even close to this level of radical economic change for the poorest of the rural poor.

No doubt some will voice concerns that legal marijuana farming will lead to an increase in abuse of the drug by our young people in the rural areas. This is a fallacious argument as marijuana is already freely and cheaply available in every village. In addition, by far the biggest challenge facing our rural youth is violence and other social ills caused by unemployment and alcohol abuse. Giving our rural youth an opportunity to earn good money from farming will reduce the time and motivation to abuse alcohol and other drugs.

The trend is clear: medical and recreational marijuana will be legal in the near future in much of the world. Is South Africa going to recognise and exploit this opportunity to the benefit of the rural poor? Or are we in years to come going to regret that we missed this once in a life-time opportunity to shoot a silver bullet into the heart of deep rural poverty? DM

Dave Martin is the co-founder of the Bulungula Incubator, a rural development NGO. He has lived and worked in the village of Nqileni since 2003. This is his personal opinion

Photo: Marijuana farming is the only form of livelihood in poverty-stricken parts of the rural Eastern Cape, as seen here in this file photo from March 2016. Photo: Masixole Feni.