Cosatu at the ready for mass protest action on Wednesday 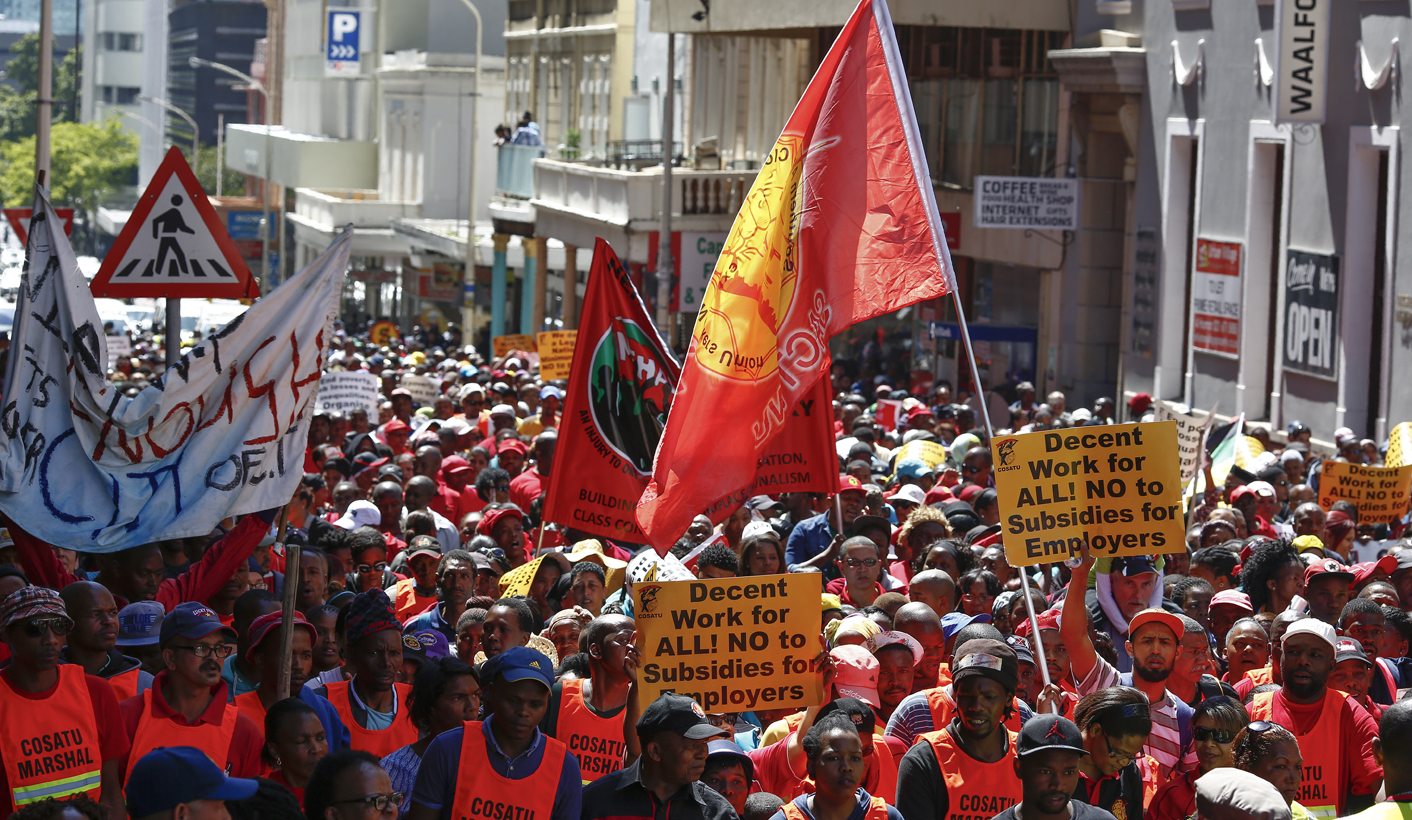 Cosatu says it’s ready for its nationwide strike to be held on Wednesday. The federation is billing the demonstrations as a game-changer in the fight against corruption while critics claim Cosatu won’t target those who have captured the state. By GREG NICOLSON.

SACP Deputy Secretary General Solly Mapaila said on Monday that Cosatu’s nationwide strike will permanently change the country as the labour movement is clearly coming out to express its disgust with corruption and state capture. “It’s not just another march where we just march tomorrow and that’s it,” he said, claiming it will begin a rolling programme of mass action.

Cosatu, supported by the SACP, will hold 13 marches across the country on Wednesday against corruption. It will lead marches in all major cities and deliver memoranda to state and private institutions. Workers wanting to participate in the strike are protected from facing any consequences at their workplaces after Nedlac issued a section 77 certificate covering the event.

“This strike is about sending a message to both government and the private sector that as workers and citizens we are tired of corruption,” said Cosatu General Secretary Bheki Ntshalintshali at a media briefing on Tuesday. “We are standing up tomorrow against the cancer of corruption that is eroding our gains and also undermining our democracy.

“Corruption has become endemic under this administration,” he said of President Jacob Zuma’s government. Mapaila said Zuma was an “elite predator”. “He has been the buffer, the main protector, the main distributor.”

“Our martyrs did not sacrifice their lives so that greed and corruption can replace our freedom,” said Ntshalintshali. Cosatu is calling for a judicial commission of inquiry into state capture. “The time to reclaim the electoral mandate we gave to the ANC is now.” Cosatu’s second deputy president Zingiswa Losi called on workers to unite behind the strike regardless of which union, sector or federation they were affiliated to. She also called on civil society and ANC members to attend.

Both Cosatu and the SACP have called for President Zuma to resign. Divisions over the ANC leader have led to a breakdown in relations within the ruling alliance. The ANC has failed to hold alliance meetings with its partners and recent attempts to hold discussions have been postponed. Zuma has been barred from addressing Cosatu and SACP events. The labour federation has publicly backed Deputy President Cyril Ramaphosa to succeed Zuma as leader of the ANC.

The strike has been criticised by the SA Federation of Trade Unions (Saftu), led by former Cosatu general secretary Zwelinzima Vavi and dominated by the country’s biggest trade union, former Cosatu affiliate the National Union of Metalworkers SA (Numsa). “There is no principle being pursued by the leaders of Cosatu,” said Vavi, “if anything this strike is about maintaining the status quo – which is class exploitation.”

In response, Cosatu affiliate the Police and Prisons Civil Rights Union (Popcru) said Saftu and its leaders remained obsessed with the country’s largest labour federation. “We view this malicious attack as yet another failed attempt to scandalously cast doubt among workers and usurp their trust for their personal ends, but most importantly, we are still awaiting to hear exactly what it is they are doing for workers besides gossiping about Cosatu,” said Popcru.

The protest action has also been criticised by Johannesburg Mayor Herman Mashaba, who said Cosatu should march to the Gupta family’s residence in Saxonworld rather than to institutions like the City of Johannesburg.

Cosatu was weakened by the expulsions of Numsa and Vavi and the march, while ostensibly about corruption, will be an indicator of whether the federation has been able to regain its strength and unify members. DM