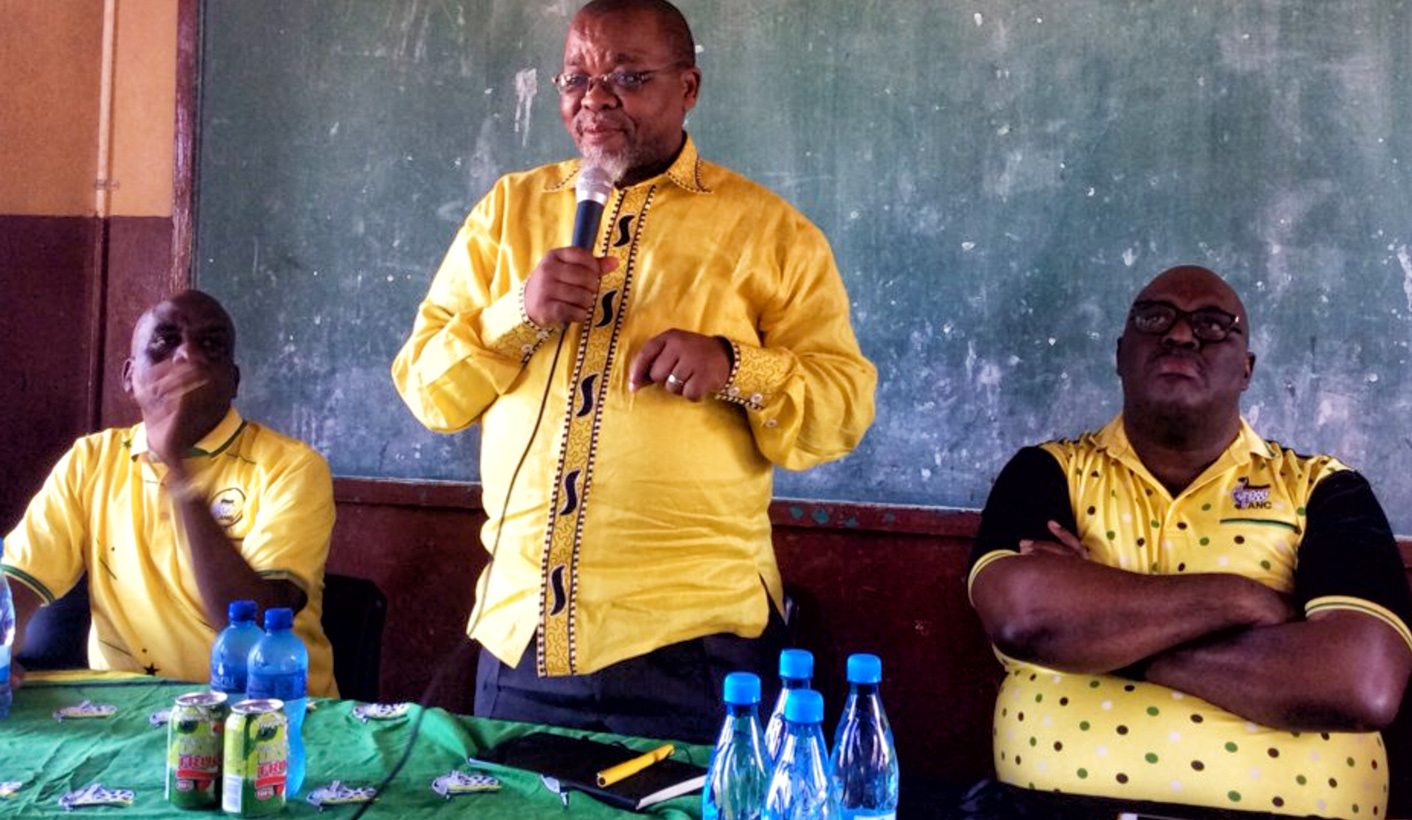 It has been claimed before in this publication that this period before the ANC’s December leadership contest could turn out to be the most crucial time, that the twists and turns now occurring could be decisive to the result at the end of the year. After several months in which it appeared Deputy President Cyril Ramaphosa was gathering steam, while Nkosazana Dlamini-Zuma was stuck in first gear, Zweli Mkhize suddenly leapt from the starting gate. Then, over the weekend, ANC Secretary-General Gwede Mantashe got his oar in and started to row hard for Ramaphosa. It is turning into a topsy-turvy race in which almost anything could happen. By STEPHEN GROOTES.

The long weekend’s political events within the ANC started with a special national executive committee meeting to discuss how the party should respond to the High Court ruling that ordered disbanding of the ANC KwaZulu-Natal leadership. It was one of those meetings where the main issue, ANC KwaZulu-Natal, was a proxy for a fight over President Jacob Zuma. Those wanting Dlamini-Zuma to ascend to the throne wanted to keep the current KZN leadership in the chair. And it would weaken her chances if some kind of “neutral” task team comprising people from both sides of the KZN divide were installed instead. In the end, in public at least, the main decision that was taken was to ask for a legal opinion on the issue.

But later over the weekend the Sunday Times reported that the NEC had been on the cusp of taking a decision simply to disband the current leadership and appoint a provincial task team to run the province up until the national conference, and into a provincial conference next year. According to the report, it was Mantashe who was summing up that decision. The paper says that then Zuma, making the closing remarks, argued that in fact they should get a legal opinion. To delay the disbanding of the ANC’s KZN leadership would appear to be in his interest.

While it could look as if Zuma has sort of got his way, his intervention can surely only be described as a rearguard action. It was more of an organised retreat than any kind of victory. And surely, politically speaking, it would appear that the balance of power, in the NEC on this issue, was against him.

It was against this context that Mantashe then made perhaps his biggest intervention into the leadership race so far. He was speaking at a church event in Venda in Limpopo on Sunday. His comments were being tweeted as he spoke from his official account (yes, he has someone to do this for him. Yes, they are younger and perhaps more au fait with Twitter than he may be…). In the middle of it he then made this comment.

He also made this statement later:

Pray for us, so that we choose life & prosperity in December, not death. #ANCinChurch #HeritageDay

These comments are probably the furthest Mantashe has yet gone in showing his support for Ramaphosa in this race. He is essentially saying that from his vantage point, Ramaphosa deserves the position of ANC leader almost by right. By using the word “crises” he could be pointing to a possible split in the party, and thus is essentially saying that if Ramaphosa does not win, it will be the end of the ANC as we know it.

There may be those who believe that Mantashe was simply speaking out of turn, or saying this as a once-off comment, or that he even misspoke. But, speaking during another event, also in Limpopo the day before (on Saturday) he also said that the “last time we had a president from Limpopo was in 1917, Sefako Makgatho. Since then we have never had a president from this province.”

This is not the behaviour of someone sitting on the fence. This is the behaviour of someone who has made up their mind and is jumping in with both feet. But very few people will be surprised by this. Mantashe has been on the same side as Ramaphosa on all of the big issues of the last year or so. They both objected to the removal of Pravin Gordhan as Finance Minister, they both offered him support, they’ve both appeared to be critical of the Gupta family, and in fact if you go back far enough, you can see that both were clearly uncomfortable with the decision to remove Nhlanhla Nene in December 2015. And Mantashe has been whispered of as a possible deputy president candidate on Ramaphosa’s slate.

The question then becomes, why is Mantashe speaking so strongly at this particular moment?

The prevailing political dynamic over the last two weeks or so has been the apparent rise of Zweli Mkhize’s viability as a candidate. The weekend before Mantashe’s comments a group of ANC provincial leaders stood on the same stage in Mpumalanga and appeared to be backing a third, “unity” option. They spoke of the need to avoid a contest in December, and said that the party was risking a split by continuing as it was. This appeared to be the start of a push behind Mkhize, as probably the only “compromise candidate” available. And it was followed up by an interview in the Sunday Times by Free State leader Ace Magashule in which he appeared to suggest he could opt for a “unity ticket”.

The speed with which Mkhize appeared to be gathering momentum might have been worrying to Ramaphosa and his backers. They may feel that if they were not seen to regain the initiative soon, this dynamic could become the dominant narrative, and would result in them losing out. It is also possible that they would feel they have been on the back foot since the release of the Ramaphosa emails, and that his response to them (particularly appealing directly to Sunday Independent owner Iqbal Surve and then going to court) had weakened him. As a result, Mantashe might have felt it was time to come out decisively.

There is also an incredibly cynical theory in some circles that Mkhize has never actually stopped being a part of the Zuma project, and that this is what Zuma wanted to happen all along. There appears to be vanishingly little evidence to back up this theory, except to look at the history of the relationship of the two men. But it actually almost certainly won’t matter. History is full of examples of a leader giving up power to an anointed successor, only to have the successor turn on them later, or become their own person almost immediately upon gaining that power. Even the strong non-believeres would have to appreciate that in this instance.

There is now likely to be a pushback from Dlamini-Zuma’s backers, who could well claim that Mantashe is being less than neutral in his stance, while holding the official position of Secretary-General; eNCA reported that Dlamini-Zuma herself has attacked Mantashe over his statements. While the ANC’s secretary-general did also tweet this weekend that “If we elect #Ramaphosa to be a President, let us have a woman Deputy President. That will be smooth. That is my personal advice #HeritageDay”, his response would surely be to point to his predecessor. Kgalema Motlanthe ended up as deputy leader of the ANC on Zuma’s slate at Polokwane. And no one criticised him for doing that at the time, for the simple reason that Zuma’s side won.

So then, with all of that said, where does that leave the ANC’s leadership race?

It is, of course, impossible to put numbers and percentages to this kind of political fluidity. But surely the chances of some kind of three-candidate race are increasing slightly. It is difficult to find examples of this happening before in the ANC’s history, and the only real contest while it was a governing party was of course the two-horse race of Polokwane. However, it could be possible that this could benefit Dlamini-Zuma, as the votes of some of the branches that may tend towards Ramaphosa could end up going to Mkhize. In other words, the “reformist vote” could be split, allowing the “status quo” vote to win the day. But surely, if there was a chance of that happening, Ramaphosa and Mkhize would do some sort of deal.

What all of this does tell us is that the situation is actually growing more complicated, and the choices facing ANC delegates are getting harder. And that means that predicting what will happen is getting more complex as well. DM

Once profitable, ACSA may now need R11bn over the next few years in the face of pandemic pressures