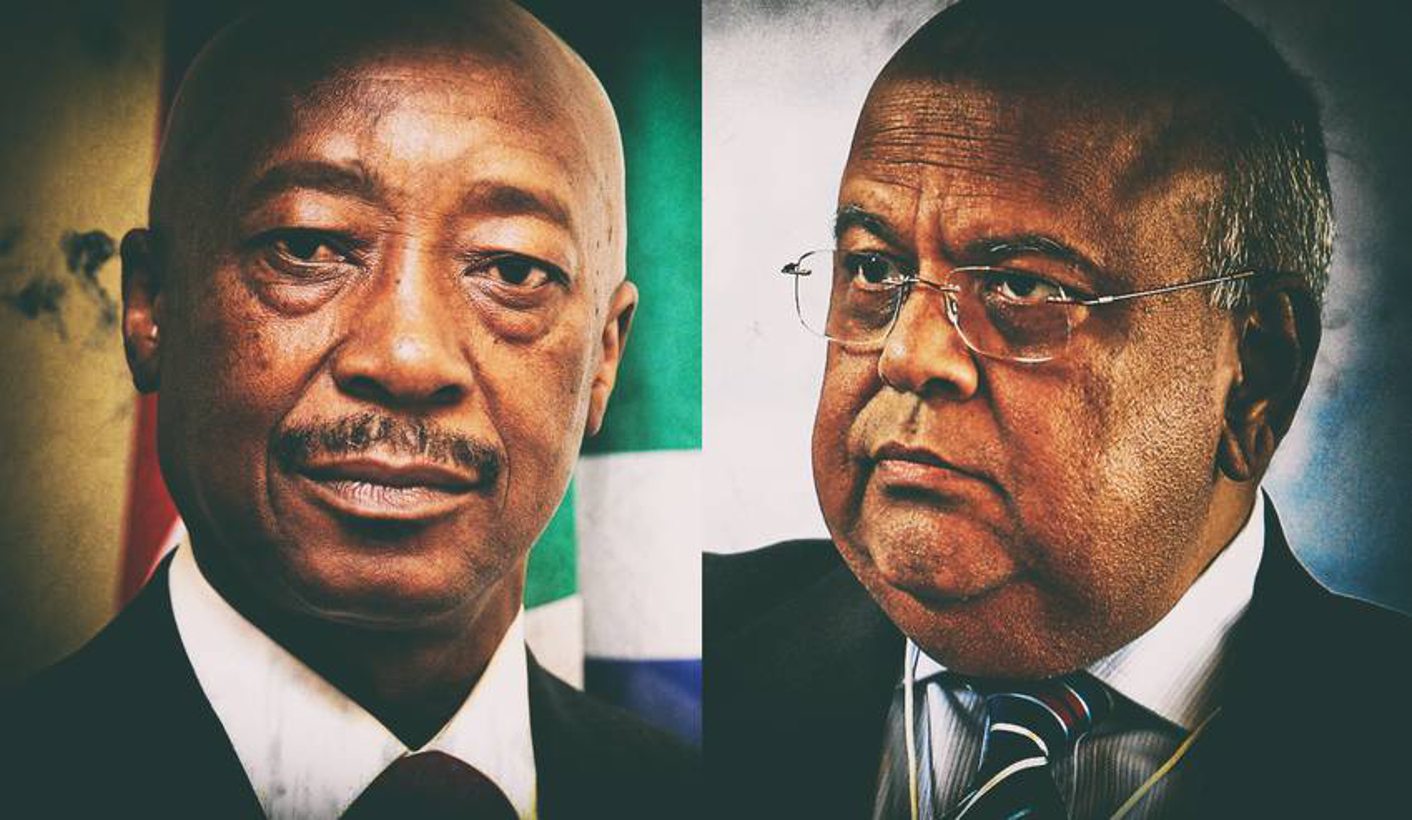 A handshake and a beer could have resolved differences between SARS Commissioner Tom Moyane's bodyguard, Thabo Titi, and SARS legal specialist Vlok Symington, a Pretoria High Court judge has found. The court also found Symington's allegation that he had been held hostage in the SARS boardroom by the Hawks and Titi “melodramatic”. This opens the way for Symington to face disciplinary charges including insubordination and misconduct. By MARIANNE THAMM.

Between a rock and a hard place is where SARS legal specialist Vlok Symington now finds himself after accidentally being caught in a bitter row between Commissioner Tom Moyane and the Hawks on one flank and former Finance Minster Pravin Gordhan, former Deputy Commissioner Ivan Pillay and former Commissioner Oupa Magashula on the other.

On Friday Pretoria High Court Judge Hans-Joachim Fabricius, dismissed, with costs, Symington’s application for an interdict to prevent SARS from instituting a disciplinary action against him.

Fabricius ruled that Symington was “inclined to melodrama” as evidenced in his assertion that he had been “kidnapped”. And while those who were present in the boardroom in SARS head office that day, including members of the Hawks and Commissioner Moyane’s bodyguard Thabo Titi, had “conducted themselves in a less than dignified manner” that was “about it”, implying that no threat to Symington existed.

“In my view those events ought to have been settled with a handshake and a discussion over a beer,” said Judge Fabricius.

That Moyane or the Hawks may have acted mala fide in certain instances relating to the “hostage” taking of Symington were not relevant to the application, said Judge Fabricius, although these actions could become relevant later during the disciplinary proceedings.

“The disciplinary enquiry will have to determine whether or not the charges raised against the applicant (Symington) have any merit and whether they are serious.”

Apart from charges of insubordination and misconduct Symington faces a further charge that he had violated the Protected Disclosures Act in providing evidence to IPID head Robert McBride in relation to Hawks head of the Crimes Against the State Unit, Brigadier Nyameka Xaba’s behaviour in attempting to retrieve an email sent by SARS attorney, David Makhapela, to the NPA that “on ethical reasons I cannot be involved in this one, as I hold a different view to the one pursued by the NPA and the Hawks”.

In documents attached to Symington’s affidavit applying for the interdict he included an email to McBride stating that SARS’ legal head had indicated that there would be “no problem in releasing the records to you” with regard to events.

Apart from lodging the complaint with regard to Xaba, Symington had also lodged an internal grievance of intimidation and assault with SARS about Titi’s conduct in the boardroom on the day and asking for him to be dismissed.

Mothle had initially concluded that the “sensitive nature” of the email attachments had not been explained to Symington by his superiors and Moyane and that this had led to Symington concluding that Titi had been a member of the Hawks.

The initial report submitted to SARS on 30 March 20171 had found that Titi had blocked the entrance to the boardroom  and that other witnesses had said his presence at the meeting had been intimidating.

Titi had also, concluded Mothle, prevented a SARS security officer and another SARS employee from entering the room. The initial report had also found it “probable” that Titi had prevented Symington from “exiting the meeting room”.

Mothle had found that he had been unable to make a finding as to whether Titi had been acting on instruction or his own accord by preventing Symington from leaving the room. He suggested that this ought to be tested in the hearing into Titi.

Later, on 24 May 2017, the terms of Mothle’s investigation had been expanded by SARS which had requested an addendum to the initial report “due to the fact that the initial mandate was to a certain extent misinterpreted by Mothle Jooma Sabdia due to a lack of clarity of the initial instruction to us”, wrote Mothle.

The new mandate was extended to investigate whether Symington had breached “employer/employee trust relationship”. It also altered findings that Titi was culpable and now named Symington as the aggressor saying he had “approached Titi in a charging manner”.

“Titi appears to have remained calm throughout and in our view did not display any signs of aggression towards Symington,” Mothle concluded in his new findings.

The lawyer also altered his initial finding that it could not be established whether Titi had acted on instruction or on his own accord and determined that his “mandate” had been “derived directly from Commissioner Moyane”.

Mothle also then altered the finding that Titi had prevented Symington from leaving the boardroom to conclude that “Titi clearly indicates that the impression that was created was not in fact the reality of the situation.”

However, Mothle concluded that Titi should be charged with intimidation even though Symington had adopted an “adversarial stance”. He also found that Symington be charged with “insubordination for failing to obey a reasonable and lawful instruction issued by the Commissioner and Louw (Kosie Louw, Symington’s boss) by refusing to return the document to the Hawks”.

A further recommendation by Mothle is that “Symington be charged with misconduct and bringing SARS into disrepute for his belligerent conduct and utilisation of offensive language toward Titi and other role players on 18 October  2016”.

Meanwhile SARS issued a statement immediately after the ruling saying it welcomed the judgment.

“SARS is of of the view that the judgment vindicates the organisation’s long-held view that the investigation and disciplinary action against Mr Symington was lawful and fair.”

SARS would continue, said the statement, with disciplinary action and reiterated that “Commissioner Moyane did not lay charges against former Finance Minster Pravin Gordhan and thus victimised Mr Symington for being a political whistle blower.”

Judge Fabricius ruled on Friday that Symington’s assertion that events that occurred in the boardroom should be seen in the wider context of the prosecution by the NPA of the former minister of finance, Pravin Gordhan, former SARS Commissioner, Oupa Magashala and former SARS Deputy Commissioner, Ivan Pillay during October 2016, were irrelevant to the current application.

“I believe that I inadvertently find myself at the centre of the political storm surrounding Minister Gordhan, and the broader issue of state capture,” Symington claimed in his affidavit.

The judge said these issues might later become relevant, however, but this is unlikely to be made public as SARS reminds in its statement that: “Please take note that disciplinary procedures against employees are confidential and deemed an internal matter”. DM