Moerane Commission: Mchunu lays bare his version of why KZN politicians are being assassinated 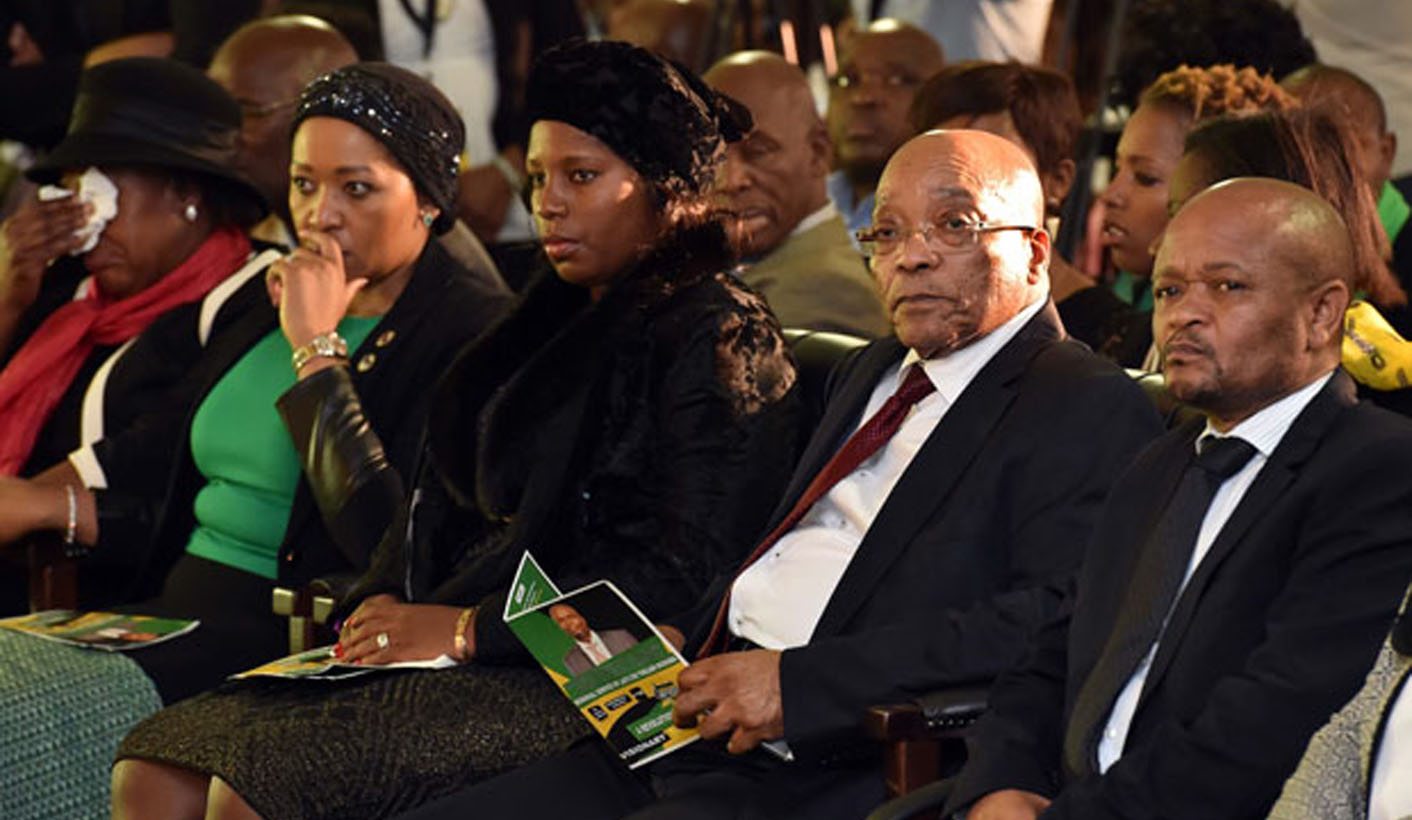 Senzo Mchunu has been a player in KwaZulu-Natal politics for over two decades. When he took to the stand at the Moerane Commission to testify about what he thinks are the reasons for the recent assassinations in the province, it was worth sitting up and listening. The ANC must accept responsibility for the killings, he said, recommending that dialogue would be the best way to deal with divisions and faction fights. Some were sceptical following a recent court judgment on the 2015 provincial conference. By CARIEN DU PLESSIS.

Rocking up at the hearing carrying his own bottle of water was a quiet testimony of the extent of his fear and suspicion, but ousted KwaZulu-Natal premier Senzo Mchunu must know better than to take chances. In this province, everybody knows somebody who can tell a tale of a suspected poisoning or a narrow escape from bullets – and these are the lucky ones.

It’s the rainy season in Durban and there was a steady dripping on the roof for the almost five hours it took for Mchunu to tell the Moerane Commission of Inquiry into political killings in KwaZulu-Natal his analysis of the violence. More than 80 ANC members have been killed since 2011 with very few answers about the culprits.

Mchunu has been in and out of party positions in the province since at least 1996, and replaced Zweli Mkhize as chairperson and premier in 2013 after Mkhize became ANC Treasurer-General. In 2015 Sihle Zikalala ousted him as chairperson in a conference which the court has now declared null and void. Still, his ousting as premier in 2016 was not reversed.

Mchunu has in recent months emerged as Deputy President Cyril Ramaphosa’s chief campaigner in KwaZulu-Natal, helping Ramaphosa make inroads into a province which has, until recently, been regarded as a solid support bloc of President Jacob Zuma and his preferred successor, Nkosazana Dlamini-Zuma.

Mchunu’s testimony was comprehensive, glossing over the pre-colonial and colonial wars in the province through the state-fanned violence of the 1980s and the small-scale wars in the 1990s.

He mentioned that “the state and its machinery” provided KZN police and “identified paramilitary kind of formations” with seven tons of arms and ammunition.

“At some point you would be more afraid of the existing firearms and ammunition than be afraid of who would carry them. You would just be terrified that there were firearms all over and anybody could lay their hands on it and you could fall victim,” he said. It’s still not clear where many of these stashes are.

Mchunu also pointed an accusatory finger at IFP leader Mangosuthu Buthelezi. He said Buthelezi “abandoned” the ANC’s liberation struggle by leaving the ANC Youth League for Inkatha – suggesting much of the violence later occurred because tensions were fuelled between the two.

Mchunu’s eventual testimony about the post-2011 killings touched on most of what everybody knows is wrong in the ANC today – the prestige and status associated with being a councillor, the cooking of election candidate lists to favour certain factions, and the fierce contestation for positions and proximity to tender processes (the “turn to eat syndrome” which “doesn’t have a chairman or secretary” and which “can draw you to the other side”).

Mchunu also outlined the rigging of branch general meetings through manipulation of quorums, moving times and venues at the last minute, and even resorting to physical bouncers to intimidate members, or calling in the police to throw members out when they root for the “wrong” faction.

So, as a result of all this, “in some communities there is permanent tension”, which is why ANC people are shooting each other and the police are doing little to arrest or investigate.

State institutions are being used to target individuals on the wrong side of those in power, he said, and the state’s intelligence apparatus isn’t doing what it’s supposed to be doing.

“The ANC must accept responsibility of these murders and killings after 2011,” he said, and make sure it puts in place systems that work, and adhere to its own rules. “Make it clean, so that competing for positions via manipulation doesn’t have any benefit to anyone.”

At the end of his testimony, one of the commissioners, Professor Cheryl Potgieter, tried to get Mchunu to time-travel a decade on, presumably to try to get away from the obvious elephant in the room – the contestation ahead of the ANC’s December elective conference.

Mchunu was talking about healing the ANC and about dialogue between the factions, but the inability of these to talk was what forced the recent court case in the first place. Looking back a decade from now, what would his recommendations be around the violence, she asked.

Mchunu went straight into politician mode. “I’d say generally the ANC as a governing party would necessarily have to take stock in terms of the effectivity of its internal systems without fearing criticism or avoiding it, but looking at the bigger picture in terms of consequences, both in terms of our organisation and in terms of extending its life, but also in terms of the impact to the greater society,” he said. “We like to look at ourselves as the leader of society.”

Advocate Vasu Gounden later pressed Mchunu again to answer whether it’s really possible for the factions in the ANC to engage in dialogue.

Mchunu responded: “I don’t see another choice at this stage,” and followed with a whole lot of imagery of breaking legs, blood, bandages, and pushing people into corners.

It’s not quite clear how he reckons the two factions would sit down and talk, but as a subtext to much of this is a change of leadership in the party – and obviously in Mchunu’s case this would be Ramaphosa.

The ANC in the province is yet to make its submission before the commission, but it’s not clear who the leaders will be by next month. The ANC’s national executive committee is set to discuss this weekend whether the provincial leadership should be dissolved following the court case which declared its election void, or whether they could appeal.

Still, whoever makes that submission on behalf of the party is unlikely to be from Mchunu’s camp.

Already journalists who are on a government communications WhatsApp group got a glimpse of the irritation of those close to Zuma when the chief director of communications in his office, Bongani Majola, accidentally posted the following to the group: “Senzo Mchunu testifying in the Moerane Commission in his capacity as what? Talking about bouncers, stealing meetings, quorating and unquorating, eating councilors (sic) it’s our time to eat KZN culture of violence etc?”

Mchunu in his testimony said the ANC didn’t have a “dustbin” in which to throw people when there are disagreements. But looking at the current state of play, things might just be a whole lot cleaner if there were one. DM

Photo: In this file photo on 15 July, 2015, Nobuhle Mashaba, the widow of the late deputy mayor of the late UThungulu District Municipality mayor Thulani Mashaba, is flanked by President Jacob Zuma, his wife Thobeka and then KZN Premier Senzo Mchunu during a memorial service for the deputy mayor, who was killed in a car accident. Photo Elmond Jiyane/(GCIS).