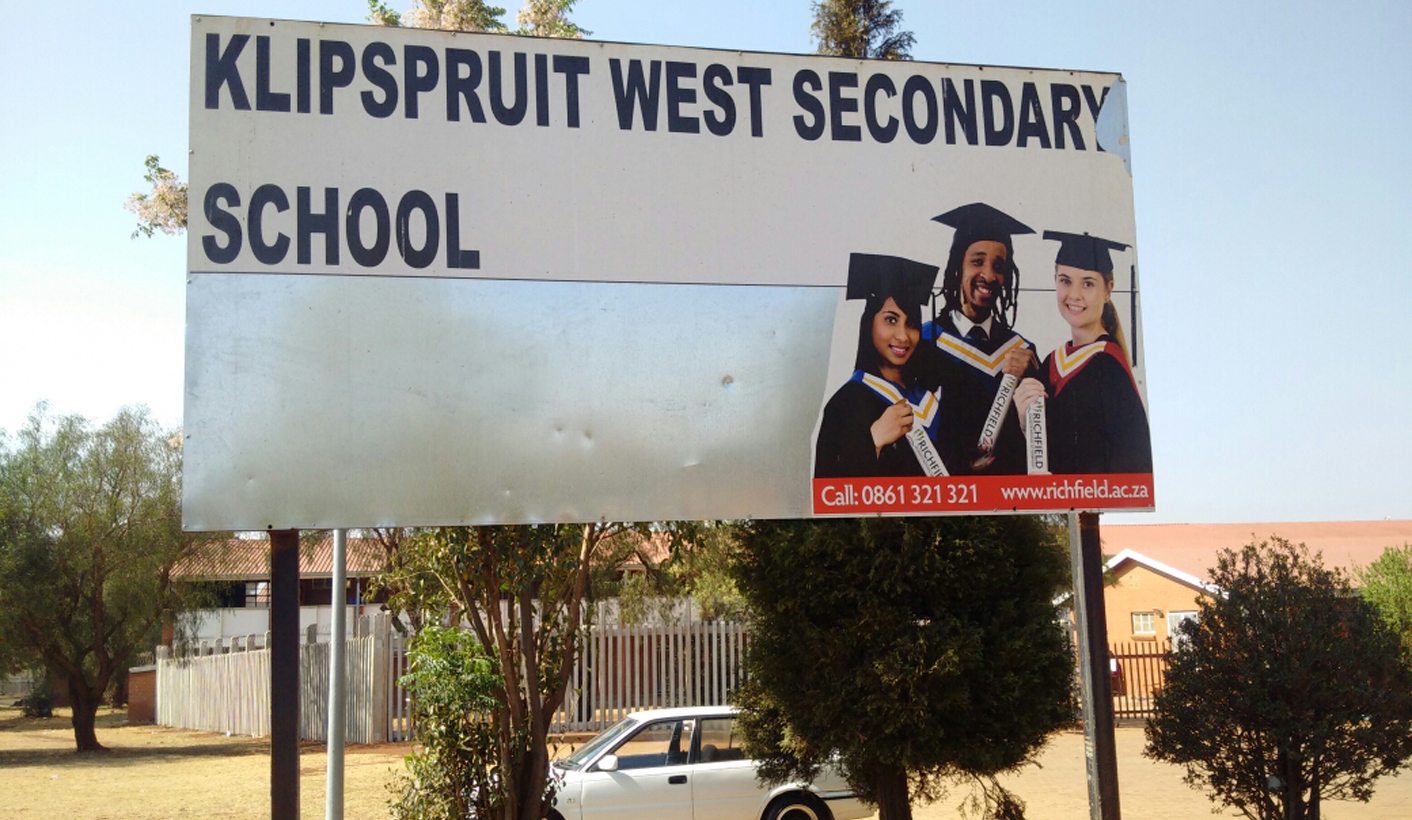 Learning was disrupted once again at Klipspruit West Secondary School in Eldorado Park after community members rejected four teachers. The situation at the school is a ticking time bomb. By BHEKI C. SIMELANE.

Schooling has been interrupted yet again at Klipspruit West Secondary School. This time community members are rejecting four teachers who they accuse of racism, abuse and meting out corporal punishment. The four teachers – three black women and a coloured man – have been at the school for almost a decade. They were forced to leave the school by the community on Monday.

Eleven teachers, including the four, did not report to the school on Tuesday. The provincial department stated, however, that the teachers reported to the district office. The teachers apparently stayed away for their own safety.

But community members said that the cause of unrest had nothing to do with race. Patriots for Equality community chairperson Anthony Williams claimed that their grievances against the principal were not motivated by racial hatred. The community spokesperson said the racist narrative was peddled by journalists who thrive on half-truths, the provincial education department, and SA Democratic Teachers’ Union (SADTU) affiliated teachers at the school.

The school was under temporary lockdown on Monday and Tuesday morning after a group of community members manned the school gates. Williams said they stopped the targeted male teacher at the gates to ask him not to wear a Sadtu T-shirt to work.

He said this kind of dress code was not acceptable for classes.

Another community representative, Jacky Mthombeni, said it set the wrong tone. “Learners are demotivated because they cannot look up to their teachers. You can see the pupils do not care about how they look. They dress as they please because they see this from their teachers.”

Mthombeni said in her possession were a number of written complaints by pupils alleging abuse by some of the four teachers. Mthombeni said conditions at the school were unacceptable and would result in many learners failing their exams. She accused Gauteng MEC Panyaza Lesufi of failing many of their children in the previous term. “If they fail one of our children, hell will break loose,” Mthombeni said.

Williams accused the government of dragging its feet in addressing grievances. Williams claimed that Lesufi had admitted that the procedure followed in the appointment of the principal was flawed, but had so far done nothing to address the situation except send one administrator to the school.

“And the fact that Lesufi makes us out to be racist is mischievous”, Williams said.

Community leaders said early on Tuesday that they had suspended exams until the HoD comes to address their complaints. However, this decision was later rescinded.

Community leaders said they were in touch with the provincial department of education, and the latest message indicated that it was waiting for the Head of Department to respond.

A brief tour of the school revealed that contractual work has been abandoned midway, with the contractor disappearing. Paintbrushes, bricks and pipes lie scattered around. Many windows are shattered, and the school hall is in ruins.

Photo: Contractual work on the toilets is incomplete.

Since the community rejected the selected principal, the school has been run by two deputy principals. Parents told Daily Maverick that the school’s governing body was also disbanded by Lesufi.

The two community representatives said they did not have faith in the deputy principals. They had not attended their meetings and were unlikely to understand their grievances.

Said Mthombeni, “Many of these teachers do not care about our school, which is why we as parents have taken the matter in our own hands.”

Photo: Community representative Jacky Mthombeni stands next to an unfinished fountain, which was abandoned after the contractor disappeared.

The community representatives said the disruption of teaching at the school was partly informed by the provincial department’s inaction in addressing long-standing issues at the school, such as the rejection of the black principal.

The school’s problems run deep. There is disunity among teachers because of racial tensions. It also emerged that some students have still not received their 2nd term reports because they were not compiled by their respective educators. Learners are also dropping out. Mthombeni said that the school had started with about 750 pupils but only two thirds, about 500 pupils, remained.

The Gauteng department of education released a statement condemning the latest disruptions. “The disruptions are unnecessary, counterproductive and flies against the spirit of the agreement reached with the community representatives,” read the statement.

According to the provincial department’s spokesperson, Oupa Bodibe, “The agreement reached was that the department will investigate all allegations made by the community organisations.”

Bodibe did not say when the investigations might be concluded.

“Once again the department confirms that investigations are under way to establish the veracity of all the allegations made by community organisations. We plead for patience, calm, and understanding to allow the investigation process to take its course,” the statement said.

The community demands include that the director-general meets them; that the four teachers are suspended immediately; a management team be appointed to assist the school; teaching to get under way urgently; the disbandment notice served on the SGB to be set aside, and that the contractor who abandoned his job be suspended.

Community representatives held a meeting at the school on Tuesday where they decided that they would no longer communicate with the provincial department. Instead, they have demanded that Basic Education Minister Angie Motshekga step in.

“We will not allow any of these teachers to enter the school premises until we have the minister’s response. We will stick to our resolutions and mandate,” Mthombeni said.

“The situation is bad at the school, I’m just crossing fingers that the pupils do not attack the teachers.” DM