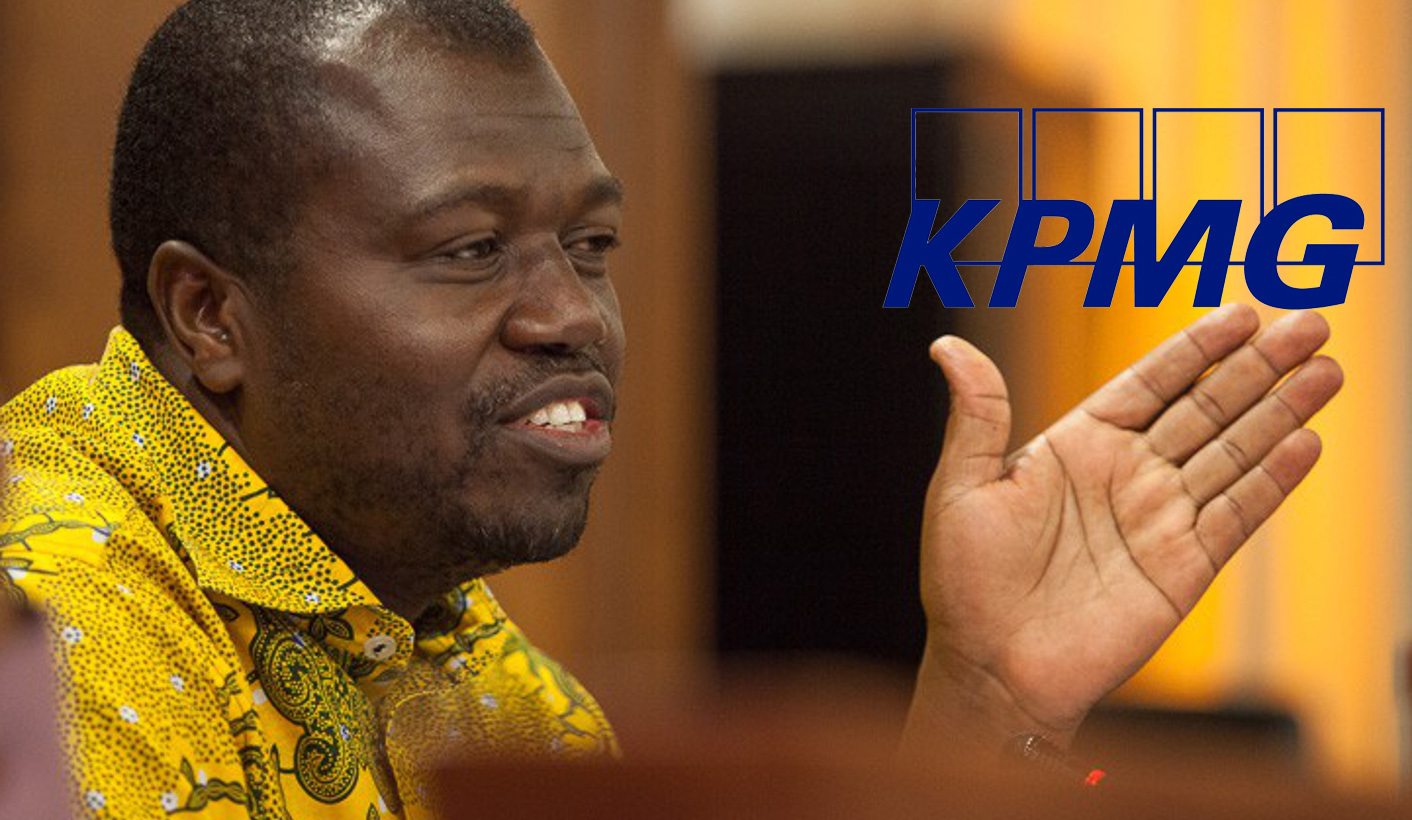 South African Revenue Service (SARS) Commissioner Tom Moyane’s fightback against KPMG for withdrawing parts of its report into the so-called rogue unit may yet drag two of Parliament’s committees into this divisive debacle. Both the Standing Committee on Public Accounts (Scopa) and the finance committee would be asked “to investigate the immoral conduct of KPMG and determine the appropriate action”, said Moyane. But the watchdog on public spending, Scopa, said it would not tackle any one particular case, but rather the broader issue of private auditors working for the state, while the finance committee said it could not investigate. By MARIANNE MERTEN.

Daily Maverick has learnt reliably that SARS Commissioner Tom Moyane was in touch with Scopa chairperson Themba Godi on Sunday, and again on Monday morning, but not with Parliament’s finance committee. Given Scopa’s interest in auditing firms and their role in the numerous negative audits the committee deals with, there was agreement that the committee could be presented at Monday’s media briefing.

For logistical reasons, it was Scopa’s ANC MP Nyami Booi, rather than Godi, who was at the media briefing where Moyane described KPMG’s distancing itself from parts of its report into the so-called rogue unit as “abhorrent, unethical and unprofessional”. There, Booi said: “We take serious exception [to] how KPMG has handled the matter.”

A subsequent statement, issued by the ANC in Parliament on behalf of the ANC Scopa study group led by Booi, said: “We are of the view that KPMG must account on its involvement in what appears to be politically motivated immoral and unethical conduct.

“As a firm which does business with various government departments and entities, we are concerned about the possible existence of similar actions where other departments and entities are concerned. The withdrawal of some aspects of the SARS so-called ‘rogue unit’ report calls into question the integrity of KPMG as an auditing firm entrusted to do business with the state,” the statement added.

Godi removed Scopa from getting specifically involved in this particular so-called rogue unit matter. “We are not going to be involved in the fight with KPMG. Our concern is with the integrity of KPMG… Our line of interest is KPMG’s ability,” he told Daily Maverick, adding that the auditors were involved across the state, including at the financially troubled South African Express, which is unable to finalise its annual financial statements by the 30 September deadline. “We do not want to go into rogue unit politics.”

Booi said his comments – and presence at the Moyane media briefing – should not be taken out of context. “For me, it is about the taxpayer’s money,” he told Daily Maverick, adding that it was not about the so-called rogue unit, but that “KPMG is not sensitive how to handle our money. That money is not handled properly”.

Scopa later issued a statement saying if KPMG wanted to continue doing business with government and its state-owned entities (SOEs), then it needed to account for its behaviour.

“KPMG’s unexplained withdrawal of a SARS report and its work in the integrated financial management system (IFMS) project, in which it was paid almost R5-million before delivering on the contract, raises questions about its integrity,” Godi said in the official statement. “Private audit firms must demonstrate that they have integrity and work in the public interest, beyond simply making a profit. Scopa will not hesitate to call on government not to use certain audit firms if they are found to be unethical.”

Meanwhile, finance committee chairperson Yunus Carrim said the committee is being briefed on 3 October by the Independent Regulatory Board for Auditors (IRBA) regarding progress in its investigations into the conduct of KPMG and Deloitte. That briefing had been scheduled well before Friday’s KPMG withdrawal of some parts of its SARS report, and the departure of its top South African officials.

“According to legal advice from Parliament, our committee is not authorised to carry out any investigation. Only the IRBA can investigate,” said Carrim in a statement that publicly confirmed that the committee was not contacted by SARS ahead of its Monday media briefing.

And so Parliament is faced with another political pickle. It’s a shrewd move by Moyane to involve Parliament alongside other steps, including legal action for reputational damage and reporting KPMG to Finance Minister Malusi Gigaba with a view to black-listing the auditing firm. The move comes amid widespread concerns, and several court challenges, over the robustness of democratic institutions, be these the National Prosecuting Authority (NPA), Hawks or SARS.

Moyane’s fightback on Monday stepped up a notch when he described KPMG’s conduct as part of a longstanding narrative of SARS incompetency, corruption, inefficiency and witch hunts that “has been perpetuated for years by some treacherous elements within society and the media”.

It was not the first time this victim narrative was hauled out publicly. Briefing Parliament’s finance committee in March, Moyane told MPs of “the apparent bias and mischievous attitude by some to cast aspersions on the character of the institution, to perpetuate a negative narrative of an organisation that is falling apart”. Reminding MPs that SARS collected around 90% of all government revenues, he said any damage to the institution would cause “unprecedented” damage.

Politicking and politics have simmered under the surface when it comes to SARS under the leadership of Moyane. Appointed in late 2014 after Correctional Services retired him as director-general in September 2013 for reaching what the department said was the legislated mandatory retirement age of 60 – Moyane only turned 60 in January 2014 and had two years left on his contract – the tax collecting authority has been embroiled in various public controversies.

A central thread has been machinations over the so-called rogue unit, allegedly bugging prosecuting authority offices and unlawfully collecting taxpayers’ information. There have been three probes since 2014, including the KPMG report that was finalised in late January 2016. In May 2015 Moyane opened a criminal case after what he said were two officials “confessing” to him regarding the so-called rogue unit. The Hawks and National Prosecuting Authority (NPA) investigations are continuing into this matter.

A fraud charge against then finance minister Pravin Gordhan for an early retirement payout authorised during his time at the helm of SARS was aborted in late 2016. The Hawks had failed to discover an in-house SARS legal opinion that such a payout was above board. The “hostage” drama involving one of Moyane’s bodyguards and SARS’ legal expert Vlok Symington, which was intricately linked to the withdrawal of charges, is playing itself out in court. Symington has asked for a declaration that he is a whistle-blower caught up “in a political storm” surrounding Minister Gordhan and the broader issues of state capture and disciplinary proceedings this week. An independent firm of attorneys had recommended disciplinary counts against both, the finance committee was told last week.

That meeting last Wednesday between Moyane, his SARS top officials and finance committee MPs proved insightful on other fronts, including tax collection.

Then SARS acknowledged a R13.1-billion shortfall of the 2017 tax collection targets. This came in the wake of the 2017 Budget review documentation release in February showing a R30.4-billion shortfall, and the 2016 Budget review indicating a R11.6-billion tax collection shortfall. But amid Monday’s fightback against a negative narrative of SARS inefficiency and corruption, Moyane maintained publicly: “We have collected (tax). Met the target. Surpassed the target.”

It’s unlikely the last salvo has been fired, be it in the public domain, within government, or at Parliament. DM