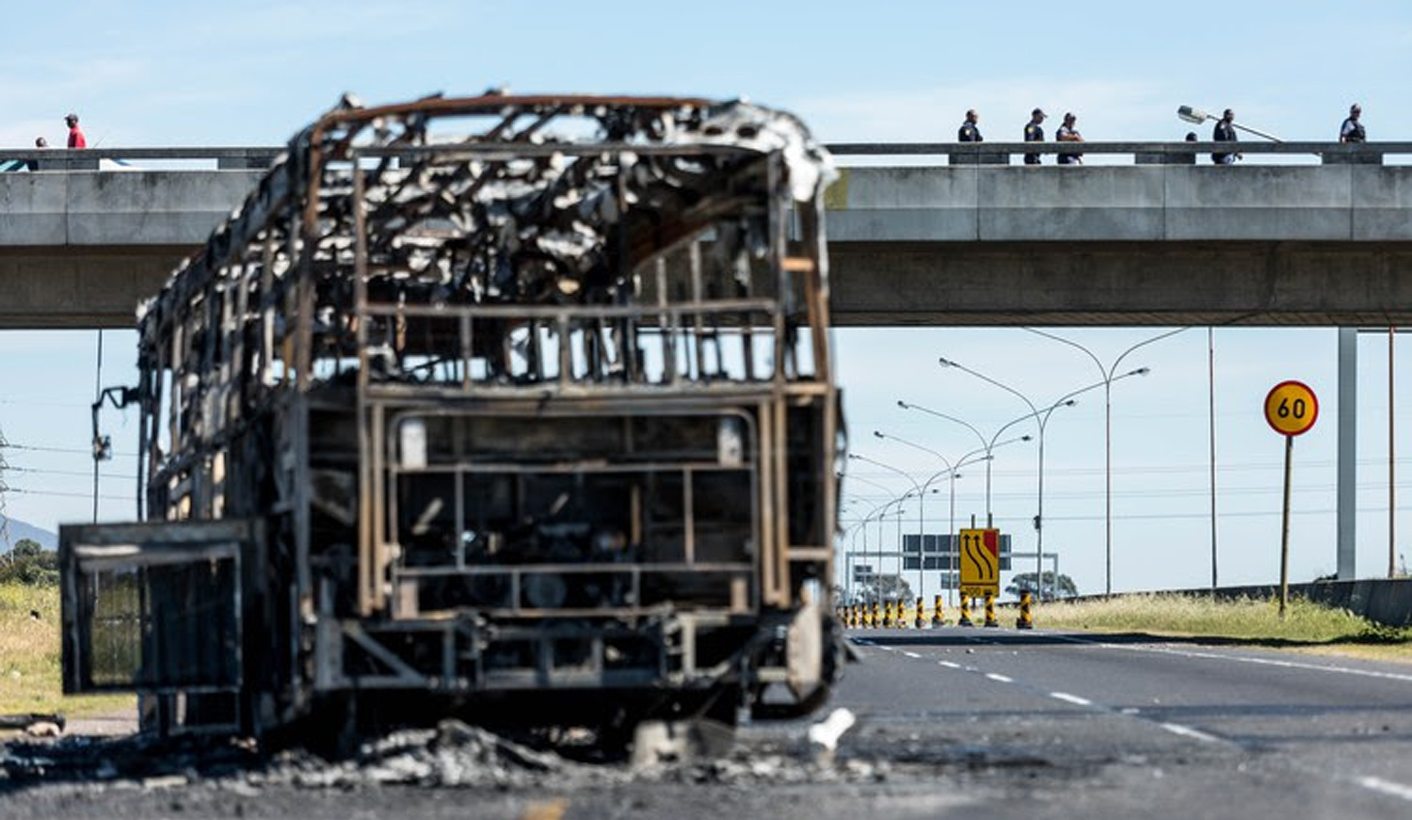 After hours of strike action and incidents of violence across Cape Town on Monday, the protest action was called off for a period of mediation. By Peter Luhanga, Tariro Washinyira, Yann Macherez, Mary-Anne Gontsana and Sune Payne for GROUNDUP.

There was violence across Cape Town on Monday as taxi drivers went on strike. Several people were injured, buses were stoned and some were set alight. By the afternoon, the strike had been called off.

Councillor Brett Herron, Mayoral Committee Member for Transport and Urban Development, said two passengers, one of them pregnant, were injured when a MyCiTi bus was stoned in Khayelitsha.

“One of the commuters was hit in the face by a flying rock and a pregnant commuter fell during the violent attack near the Kuyasa stop.”

Both women had been admitted to hospital, he said.

Photo: As he was leaving Nyanga, Ross Lewis’s car was stoned. He was injured on the head. He drove himself to hospital. Photo: Yann Macherez

MyCiTi buses were stoned in Dunoon, Mfuleni and Khayelitsha, and one bus was set alight and burnt out on the N2 under the Symphony Way bridge, Herron said.

MEC for social development Albert Fritz said the car of a social worker travelling to Kraaifontein had been stoned. The social worker had been injured and was being treated in hospital.

When GroundUp went to Nyanga, some residents were burning tyres and blocking Govan Mbeki road, stopping cars. Police parked their vehicles 500 metres away.

There were no minibus taxis operating and only two Golden Arrow buses when GroundUp was there.

A Delft taxi driver who did not want to be named said drivers had heard about the strike on Friday afternoon. He said it severely affected his income.

Photo: Zanele Njokwana was desperately looking for a bus to go to the city centre. Monday was the last day for her to post the death registration form for her late boyfriend. Photo: Yann Macherez

Achmat Dyason, spokesperson for the Provincial Minibus Taxi Task Team, told GroundUp in Wynberg that taxi operators were dissatisfied with the current leaders of the SA National Taxi Council (Santaco) and did not want the provincial government to recognise them.

He said the strike had been suspended after a meeting with the MEC.

“We are not happy with the process that has begun a year ago about the Santaco leadership. We had agreed that elections have to be free and fair. We have a constitution in place which actually allows the people to hold accountable the leaders they elect, but the outgoing committee is not accountable. bTheir leadership term expired in March this year and we are operating in a vacuum.”

Dyason said taxi operators no longer wanted the provincial government to consult the leadership of Santaco, which had become distanced from members. “We reached an agreement with the MEC. He recommended that a retired judge be nominated to look into our grievances. In two weeks the MEC’s office will give us feedback.”

The deputy chairman of Santaco in the Western Cape, Nazeem Abdurahman, said the strike was a “ploy” to discredit Santaco leadership on the eve of the November Santaco elections.

He said the leaders of the strike in Cape Town did not want to use proper channels to address their grievances. “Associations that did not operate were scared for their safety and passengers’ safety as well as their gatjies’ safety. This is a volatile industry.

“We condemn any violence that emanated from this strike and want government to deal with the offenders,” he said.

In a statement, MEC Donald Grant said he had met the task team and Santaco and the task team had agreed to a mediation process to be facilitated by the Department of Transport and Public Works, and run by someone “with a legal background”.

By 07:30, commuters in Delft who had been waiting for taxis either went home or walked to Unibell and Pentech train stations. Others decided to take the bus.

By 08:30 people started informing their bosses that they would not make it to work or would be late. Others left for home, with some saying they needed to get to work because they needed the overtime or had been absent from work and wanted to catch up on their workloads. By 9am, the bus still hadn’t come.

People waiting for the bus heard that a Golden Arrow bus was set alight in another part of Delft. They were worried about the driver of the 08:05 bus to Cape Town, a woman. “What about her? Will she be safe?” asked one commuter.

At about 09:50 a MyCiTi bus from Khayelitsha was stoned and set alight.

One of the passengers, Nobesuthu Beya, who was on her way to work in Observatory, said she boarded a MyCiTi bus when she found that the Golden Arrow buses were not working.

“I managed to get a MyCiTi in Ekuphumleni. I noticed that it took a different route out of Khayelitsha, but we ended up on the N2 to town. When we got to the bridge before Borcherd’s Quarry, a number of people were standing on the bridge. As we got closer, they started throwing bricks at the bus,” said Beya.

Beya said the bus driver pulled over and the passengers got out and started running. Two men in balaclavas ran to the bus and set it alight. “I was petrified. The bus burnt quickly,” said Beya.

She and others started walking back to Khayelitsha on the N2, but managed to get a lift in a Metro police van which dropped them in Mew Way. She hitchhiked home.

In Dunoon, police fired rubber bullets and tear gas to disperse a crowd that was pelting private cars with stones and setting alight tyres on Potsdam Road and along the N7.

Hundreds of commuters resorted to walking about 5km to catch MyCiTi buses at the Golden Arrow bus terminus, where the buses were making a U-turn, avoiding Dunoon.

In Dunoon, tyres were set alight near the taxi rank, while taxi drivers sat in their parked vehicles.

Somali spaza shop owners locked themselves inside their closed shops.

Desmond Nobuntu, DTA spokesman, said the drivers had joined the strike in solidarity with other taxi associations.

He complained about impoundment of taxis, problems with operating permits and problems with the MyCiTi bus service “taking over our business”.

“We currently have more than 100 taxis without permits. People are forced to go to MyCiTi, whereas they prefer taxis.”

He said 10 Dunoon taxis had been impounded by the City and that fines ranged from R7,000 for a first offence to R21,000 for the fourth. “This was more reason for us to join the strike,” he said.

Photo: Police on Japhta K. Masemola Road look for protesters involved in the burning of this vehicle. Photo: Yann Macherez

There was also a spat between city councillor Khaya Yozi, the member for ward 39, and JP Smith, the City’s Mayco Member for Safety and Security.

Yozi accused the City of refusing to deploy Metro police in Nyanga and Khayelitsha to assist SAPS. Smith said this was false, that he had confirmed that Metro police had been deployed in these areas and had responded to incidents. He indicated that he would be laying a complaint against Yozi in terms of the City’s Code of Conduct of Councillors. DM

Main photo: A bus was burnt out along the N2. Photo: Yann Macharez