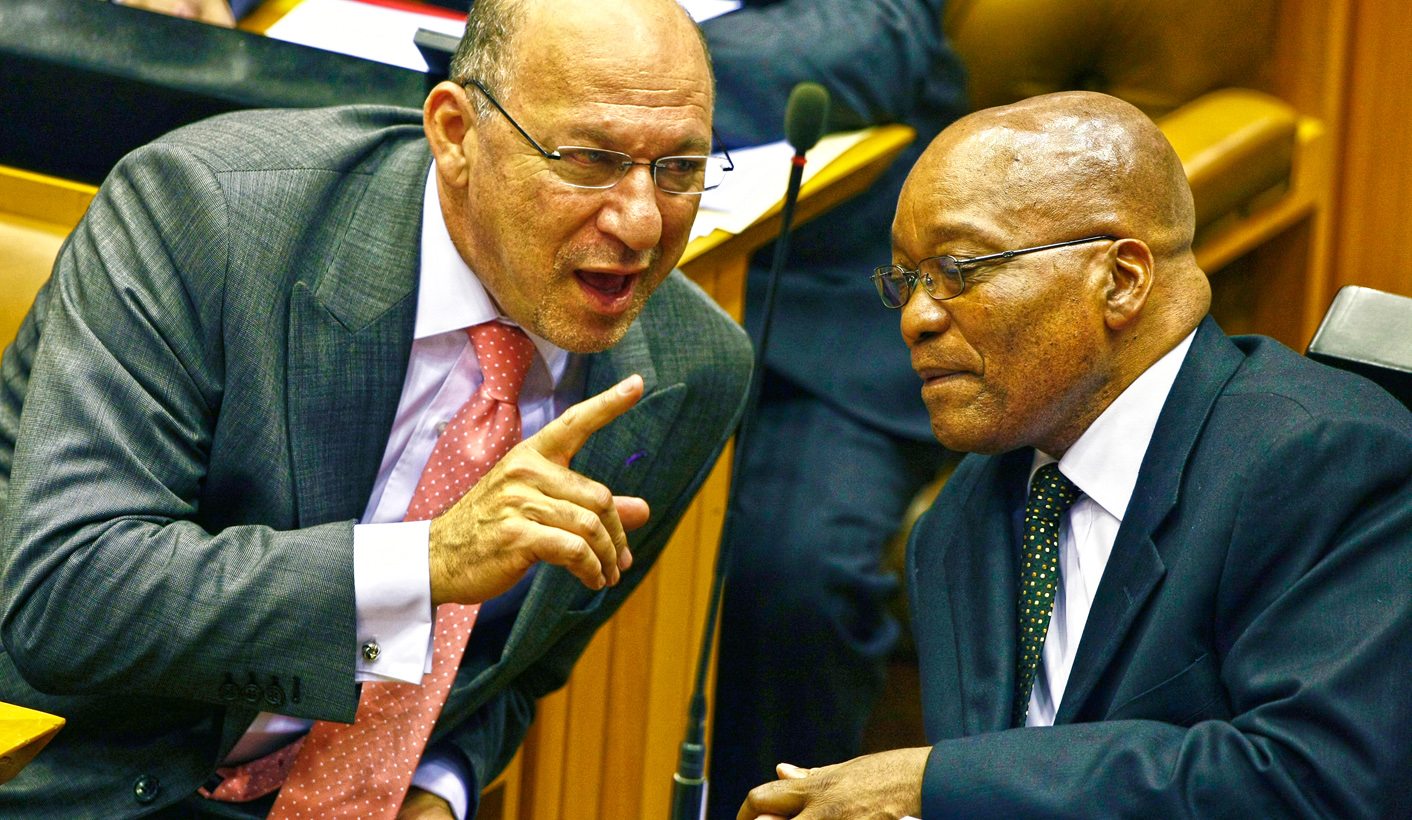 This month marks five years since the government’s National Development Plan was adopted by Parliament – and a spirit of celebration is in the air. At a gala dinner in Cape Town on Tuesday evening, speakers including President Jacob Zuma paid lavish tribute to what they described as a “living document”. In reality, the vision of South Africa in 2030 that the NDP sketches seems further off than ever – and the NDP increasingly resembles a text doomed to languish unrealised in a dusty drawer. By REBECCA DAVIS.

“The plan is in action, the plan is alive!” crowed Deputy Minister Buti Manamela at the fifth anniversary celebrations of the National Development Plan on Tuesday.

Manamela was speaking at a glitzy gala dinner held to mark the occasion at Cape Town’s five-star Westin Hotel. Mirrored placemats allowed invited luminaries to admire their own reflections while they dabbed their lips with gold silk napkins. Guests included bigwigs of government and business, with a fair smattering of Cabinet ministers. “One Nation, One Plan,” proclaimed screens flanking the speaker’s podium.

It is five years since the NDP was adopted by Parliament by all parties – a rare moment of unity, and one which Speaker Baleka Mbete termed “a critical milestone towards building consensus” when she spoke at Tuesday’s dinner.

The NDP was always an ambitious document, and from the vantage point of 2017 it arguably seems more ambitious than ever. Intended to provide a road map for what South Africa is supposed to look like in 2030, it sketches a picture of a country in which inequality has been reduced and poverty eradicated.

“In 2030,” runs the vision statement for the NDP, “we live in a country which we have remade.”

South Africa in 2030 is “a home where everybody feels free yet bounded to others; where everyone embraces their full potential”.

Other elements of the 2030 vision are more specific. “We love reading”, for instance; “All our citizens read, write, converse, and value ideas and thought”. The leaders of the country, in 2030, are wise and just. From where we’re sitting now, it sounds like a veritable utopia.

“The NDP lives with us in and across government,” Minister in the Presidency Jeff Radebe told Tuesday’s audience. “It is at the core of everything that we do.”

Evidence for the realisation of the plan is, however, somewhat patchy.

President Jacob Zuma listed an increase in South African life expectancy, an increase in the number of children at school, improved access to housing and basic services, and gains in investment and jobs in the ocean economy.

“The progress is however uneven across sectors,” he acknowledged.

Radebe put it a little more bluntly. “Our progress has not been linear. Admittedly, neither has it been stellar,” he said.

Certain targets of the NDP currently seem hopelessly remote. By 2030, for instance, unemployment is supposed to be reduced to 6%. That would amount to an incredible turnaround in the 12 years available to achieve this, against the backdrop of sluggish economic growth.

Was the NDP always wildly unrealistic – or has government simply failed to implement it in a meaningful way?

University of Pretoria politics lecturer Sithembile Mbete, who previously worked in the National Planning Commission secretariat, says that part of the problem is that the NDP failed to allow for many of the social circumstances that form part of our current reality.

“One of the most glaring omissions of the NDP was not anticipating the unrest and resultant instability in the mining sector,” Sithembile Mbete told Daily Maverick. She pointed out that the Marikana massacre happened a mere five days after the NDP was introduced.

“So much of the economy chapter was based on leveraging the earnings and productivity of the mining sector in order to achieve growth in other areas, and also to try stabilise unemployment,” Mbete says. “Five days later, the biggest crisis in mining since ’94 happens – and we never recovered.”

Similarly, the NDP’s chapter on education did not properly anticipate the student fees crisis and its attendant tensions.

But the NDP’s inability to predict the future need not have been its death knell, Mbete says. If the National Planning Commission, which produced the plan, had been given the necessary political power and resources, the NDP could have been able to adapt to changing contexts to maintain its relevance. That didn’t happen, Mbete suggests, due to “broader political concerns within Cabinet and the [tri-partite] Alliance about the NPC becoming another super-ministry” under the leadership of Trevor Manuel.

“What has been evident is that there is insufficient political will to really implement the NDP and provide the resources required to put its varying recommendations into action,” Mbete says. She suggests that what the NDP required, but never got, was a highly visible champion to promote it and create familiarity with the plan among ordinary people.

“The NDP has now settled in our lexicon as the lodestar and the bedrock of our collective destiny,” Radebe stated on Tuesday evening. But is that really true? Aside from the lip service paid to the NDP in government speeches, are South Africans widely familiar with the plan and its intentions for the country?

Many would say not. Mbete says that the plan has been hamstrung by a “real lack of a communication strategy with the public”. As a result, she compares the NDP to the old spaghetti advertisement featuring a grandmother occasionally wheeled out of a cupboard to prepare a pasta meal and then returned to the cupboard. The NDP is rolled out when government is trying to persuade investors of their vision for South Africa’s future, or when it is needed to justify particular budget aspects, but otherwise largely neglected.

Yet on Tuesday, government’s big cheeses continued to trumpet the NDP as – to quote President Zuma – “one of the most important achievements of our country”.

Expect this narrative to take on additional weight as the end of Zuma’s term approaches, and the need to establish positive, market-friendly aspects of his presidential legacy heightens.

Radebe was at pains to give all the credit for the NDP to Zuma, praising him for doing something “quite extraordinary” in having “boldly” appointed the National Planning Commission to draw up the NDP. In Zuma’s own address, he repeatedly made reference to what “I” did in terms of the history of the NDP.

The real pity of the NDP’s current half-life, Sithembile Mbete suggests, is that South Africa could really use a prominent, unifying document at this time in its history.

She points out that the NDP was intended not just as plan of action for tackling economic challenges but also as a kind of national mission statement: a set of shared values to take South Africa into the future.

“The NDP hasn’t been able to be that. But I think that if you look at where we are as a country, in terms of the deep societal cleavages around race, violence, and so on, we are in quite desperate need of something we can all get behind,” Mbete says. DM

Photo: South Africa’s then Finance Minister Trevor Manuel chats with ruling African National Congress President Jacob Zuma in Parliament in Cape Town during the swearing in of members and the formal election of the country’s president, May 6, 2009. REUTERS/Nic Bothma