Analysis: The damage the Zuma Tsunami has wrought 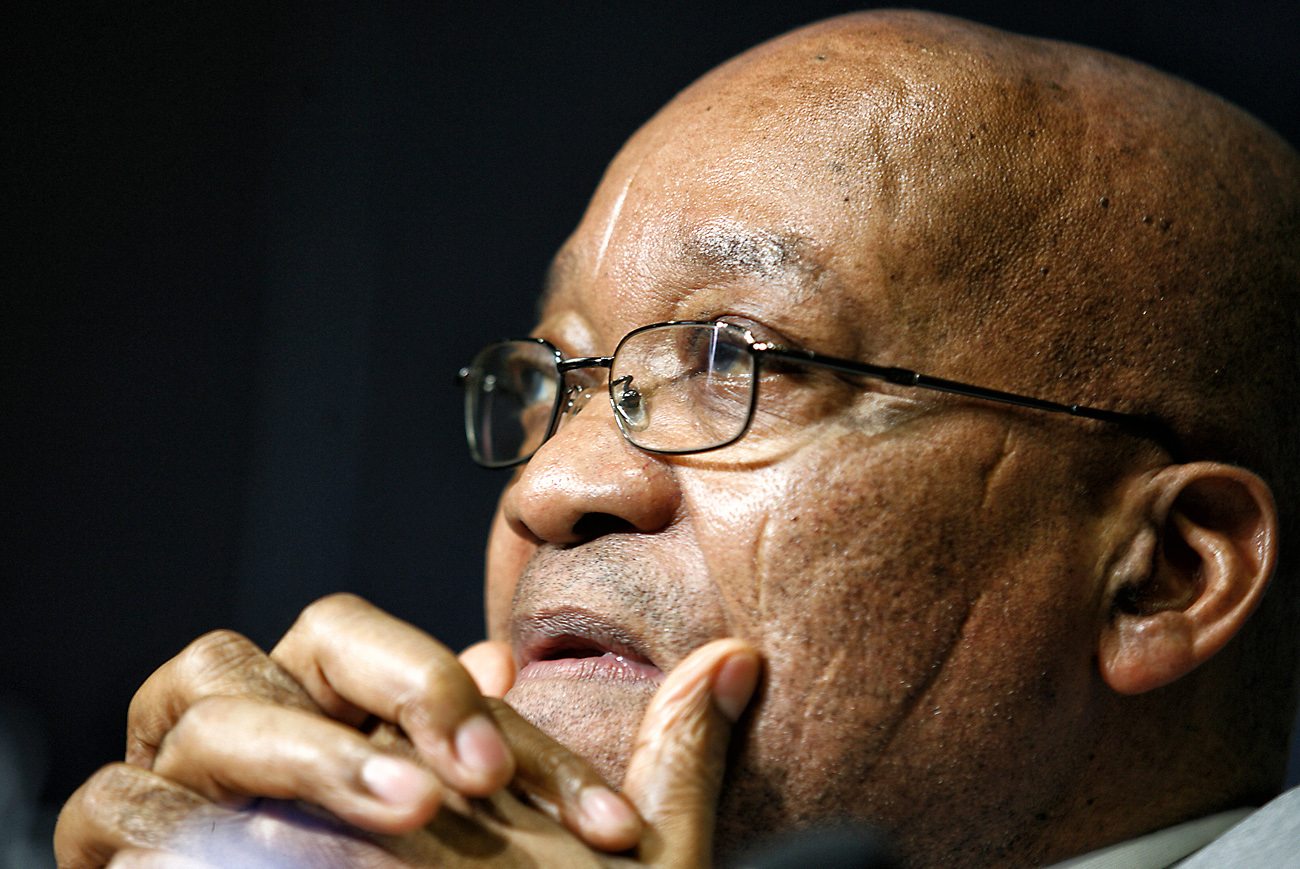 The speed at which a tsunami can move is frightening. But what is less dramatic, and sometimes more important, is the speed at which the tsunami pulls out, as its power is sucked away and what has been destroyed is revealed. Tuesday was a day in which we saw some of the devastation that has been wrought. As the power is sucked away from President Jacob Zuma, as the wave that brought him to the highest office in the land withdraws, so we see the stark damage that has been done to the ANC. And to the office of the Public Protector. Unfortunately, in the case of this particular tsunami, it has the potential to cause as much damage during its withdrawal phase as it did when it first broke across our political banks. By STEPHEN GROOTES.

News editors of the land didn’t know where to start at 10 o’clock on Tuesday morning. A set of legal papers filed by the Reserve Bank had revealed that Public Protector Busisiwe Mkhwebane had met the Presidency and the State Security Agency before releasing her finding that the inflation setting mandate of the Bank must be changed. Exhibit A in the papers was a note, purportedly in her own handwriting, made during her meeting with the SSA, in which she posed the question about the Bank, “How are they vulnerable?”. Then, just as the legal reporters were digesting that, the KwaZulu-Natal correspondents were fighting to be the lead with the court ruling that the conference that saw Sihle Zikalala elected leader of the ANC in the province was illegal, and thus null and void.

In so many ways these two issues, taken together, say so much about the last decade of our politics. They are two completely separate developments. One is about economic policy, the other about a provincial conference of the governing party. And yet no one can deny that they are both about Zuma. Mkhwebane was clearly part of a plot to undermine and destabilise the Reserve Bank. After her ruling on the ABSA/Bankcorp bailout (which she then abandoned when challenged by the Bank, Parliament and the National Treasury), there were only two possibilities. That her time as a spy proved the adage that “once a spook always a spook” and she was working for Zuma, or that she was a loon. Now we know that she was working for Zuma. The KZN ANC ruling is also all about Zuma. It is about his determination to cling to power through any means necessary, by breaking the rules of his own party. Zikalala is one of his strongest supporters, it is obvious to everyone how important the province will be in December, and so he was making sure that it was in his grasp.

It is important to consider how important all of this is. In the Reserve Bank case, Mkhwebane was working with the Presidency and the SSA. To what end? From her notes, to undermine the Reserve Bank. Just consider this for a moment. The Bank is one of the institutions that has underpinned our rating since 1994. It was given its current role as part of our constitutional negotiations. Its job is to protect the value of the currency. While economic policy can never be apolitical, it has by and large stayed out of politics since 1994. And yet Zuma decided to attack this independence.

It should be remembered here that Mkhwebane was first nominated to the post by the IFP, which could be an indication of exactly how far Zuma’s tentacles reach. It could suggest that he was able to actually get another party to make a nomination that would suit him. It could show how much power he really does have.

But it also tells what kind of person Mkhwebane is, someone who is happy to be appointed to one of the most important positions in the country, yet only to act as a vassal for someone else. It must also surely explain her inability to defend her own findings when asked about them. However, it also tells us something else about her: that she must be incredibly incompetent. How else could it be that these documents have actually been given to her opponents in this legal dispute with the Reserve Bank? Why were they not destroyed? And who takes handwritten notes during a meeting with the State Security Agency in the first place?

This is also a hallmark of Zuma’s appointments. It started with his selection of Menzi Simelane for the position of National Director of Public Prosecutions. His policy of placing people he could control in these positions has continued, all the way through to his selection of Tom Moyane as SARS Commissioner. And look at what these people have done. Has Shaun Abrahams done his job fairly and properly, has he upheld the Constitution as he promised? Has Moyane maintained, or improved, the way that SARS operates? Have any of the people who led the Hawks since Anwa Dramat was forced out done what they were supposed to do? You could argue that the only person selected by Zuma for an important post who has done their job and upheld their oath is Chief Justice Mogoeng Mogoeng.

All of these institutions have been incredibly damaged. The wreckage left by the Zuma tsunami will take time and effort and energy to repair. Citizens talk about refusing to pay their taxes because of Nkandla and SARS, others take justice into their own hands because they don’t trust the criminal justice system. And the reputation of the Public Protector’s office is just a ruin of what it was less than a year ago.

But perhaps nothing is more damaged by all of this than the ANC itself. Imagine being a member of the party, of one of the branches that lived through the conference that saw an illegitimate leadership elected. Now, that leadership is likely to try to appeal the ruling, they will claim that in fact Tuesday’s ruling changes nothing on the ground, and so the balance of power in December remains unchanged. Would you consider this leadership to have legitimacy? And if you didn’t, how would you react now? The people who claim to be your leaders have shown they did not follow the rules of the ANC. For them, might was right. Why should you behave any differently?

And if nothing else proves to you the damage wrought by Zuma to the ANC, look at the polls. In 2009, Zuma had been its leader for just over a year. He had recalled a president and allowed the Congress of the People split, but it could still sail to 65.9% of the vote. Now, eight years of Zuma rule later, the party is sitting on around 47%. Even its own leaders say it could lose in 2019.

But, unfortunately, the damage is not over, there is still more wreckage to come. A possible reason for the setbacks suffered by Zuma on Tuesday, the revelation that he must have been behind the attack on the Reserve Bank, and his loss, through the proxy of the now illegitimate KZN ANC leadership, is that he has failed to really understand the structure of our society. Our structures were designed to be fair. There are rules and you have to follow them. If you don’t, the courts will overrule you. Time and time and time again, Zuma has failed to appreciate this. He has failed to appreciate that this is a society where many different groups have money, organisation and resources. Many of those groups are outside the ANC. Some are actually in the ANC itself, and are prepared to take him on.

In a way, one of the problems he faces is that all of his previous mistakes are catching up with him. His choice of Cyril Ramaphosa as Deputy President made sense at the time; he must rue it now. His decision to get someone so obviously, and blindly, loyal as Public Protector has bitten him in the behind through her incompetence. He has had to rely on a strategy of breaking rules and institutions to succeed, forgetting that it also opens the door for his opponents to continue fighting.

This means he is now left with dwindling options. And none of these options include abiding by the law. It may seem incredibly cynical to say this, but you have to ask if more people are going to have to die, particularly in KZN, or if there may be some other power grab in the offing, if a dramatic attempt to politicise individual police officers and soldiers may now be made. It may seem needlessly dramatic, but if you consider that Zuma controls the leadership of the SSA, the police and the military, and very little else, what other cards can he play?

How much more damage can a tsunami do? DM

Marcus Low for Spotlight • 2 hours ago