ANC Leadership Race: Who will decide – Delegates, or a Judge? 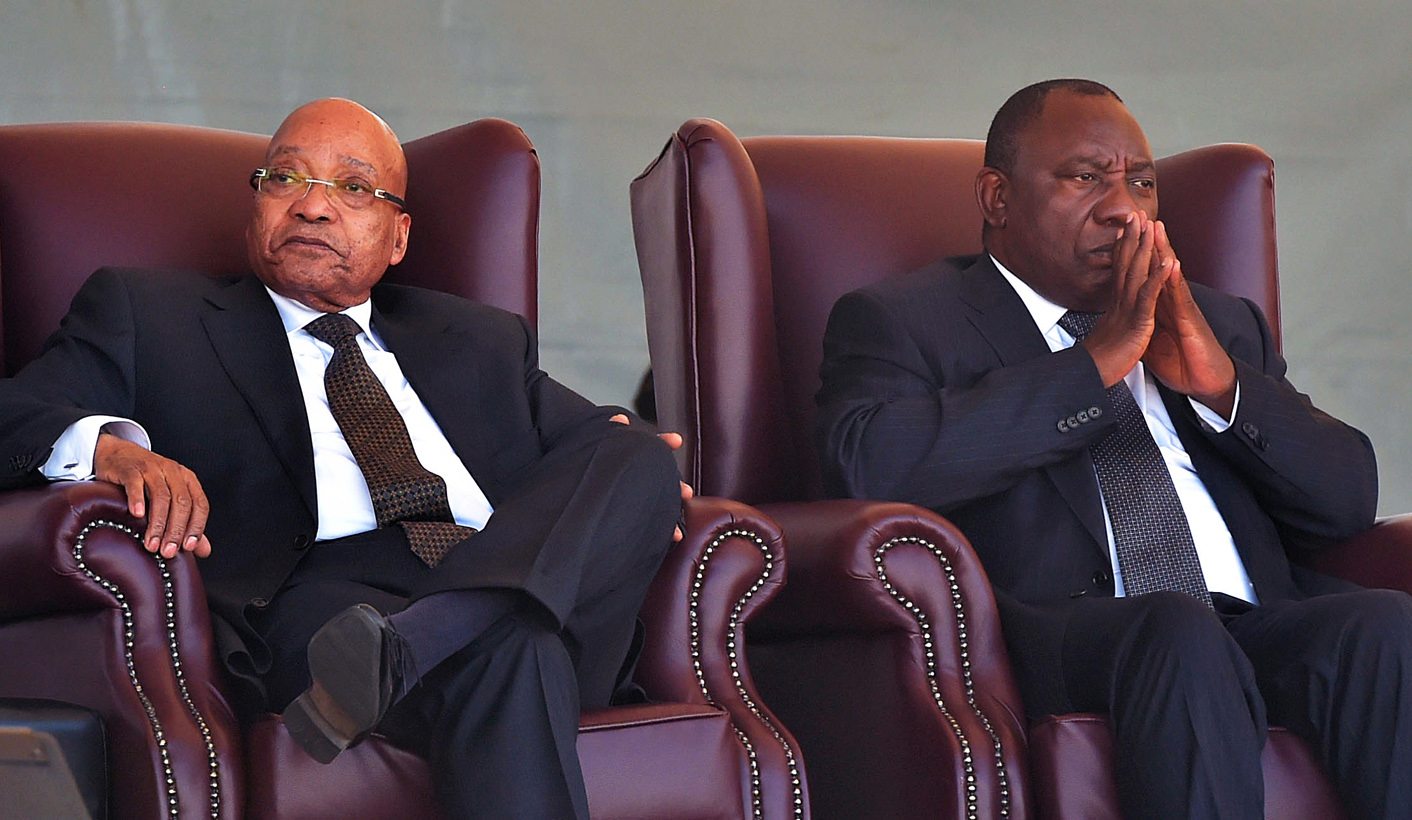 A quick look at recent comments by senior ANC leaders in the run-up to the party’s December conference will reveal how high the stakes are, and the sharpness of divisions. Deputy President Cyril Ramaphosa talks about state capture and corruption, Secretary-General Gwede Mantashe suggests December is a “matter of life or death” for the party, while President Jacob Zuma has said that foreign forces tried to poison him, that witchcraft is keeping the DA in power in the Western Cape and that the youth must be vocal to “get our land back”. One of the possibilities that must now be considered is that the ANC’s December conference does not end in a clear victory but in what you could call a “disputed outcome”. In other words, one of the sides could simply refuse to accept the result. BY STEPHEN GROOTES.

The ANC’s policy conference in July saw many people believing that Cyril Ramaphosa had started to build sufficient momentum to win in December. President Jacob Zuma’s behaviour in suggesting that the loser of the election should automatically be deputy leader, his apparent “loss” in the policy arguments, and whispers around the choices confronting ANC Mpumalanga leader David Mabuza, suggest to some analysts that Ramaphosa is now in the lead. But they are countered by others who suggest that Zuma simply cannot lose, and will find a way to contrive a victory for Nkosazana Dlamini-Zuma. They offer little evidence to support their view. Rather, they look at the past and at how Zuma has emerged victorious ever since the 2005 ANC National General Council, and predict that his control of ANC structures is still too strong. In short, their, perhaps cynical, suggestion is that Zuma will simply “steal” the result.

It is possible that they are correct. But they could be forgetting other events in the ANC’s recent history. Over the last few years we have seen several court challenges to the outcome of conferences. In 2012, a member of the ANC in the Free State, along with several other fellow travellers, went to court to have the provincial conference of the Free State ANC declared null and void. He won, with the result that the entire Free State delegation did not vote at Mangaung, the conference they were in fact hosting. His name was Mpho Ramakatsa, and for his trouble, he was eventually expelled from the ANC, before going to the Economic Freedom Fighters, and was later expelled from that party as well.

Earlier this year a group of ANC members, representing dozens of branches, went to the High Court in Pietermaritzburg to challenge the conference that saw Sihle Zikalala being elected KZN leader. It is often explained how the outcome of this case could change the balance of power in the party. Parts of the current leadership are very much behind Dlamini-Zuma. Should they suddenly have no legal power, the dynamics would change, and you could find that KZN’s view on the leadership changes. All of that is correct. This case was brought nearly two years after the conference, and events back then suddenly have a huge bearing on the situation now. The nub of the issue is technicalities around whether branch general meetings were held properly, whether the letter of the ANC’s constitution was followed, and if all those present at the conference were meant to be there.

This case could turn out to be the textbook example of what could follow after the December national conference.

While ANC contenders are criss-crossing the country (or just KZN…) supposedly attempting to change the minds of branch members and thus their delegates, it is likely that most people in the ANC have already made up their minds about which way they will go. In fact, like most people in this country, they probably decided whether they support Zuma and thus Dlamini-Zuma around two years ago, and nothing is going to change their minds now. This means that the real battle is not about the minds of delegates, but actually about ensuring which/whose delegates get to the conference. When well-informed people suggest that this is how the conference will be “stolen”, this is the machinery they must be referring to.

But the fact that any decision made by a body, including an ANC conference, is subject to judicial review, must surely make this much harder to do. Consider the words of Justice Zac Yacoob, who wrote the main judgment in the Ramakatsa Case in the Constitutional Court:

In short, any decision made in the selection of candidates, in the way the candidates actually vote and in how the results are tabulated could be challenged in court. This must surely make it much harder to manipulate the final result.

But it doesn’t necessarily dictate that one or the other candidate will win. All it tells us is that the candidate with the largest number of branches behind him or her will win. And that means it is about creating branches, signing up members (and actually signing up live, breathing people), holding branch general meetings and selecting the right delegates. This is not impossible for either side, but is surely easier for those who are more entrenched. For example, Ace Magashule, who has run the ANC in the Free State since its formation in the early 1990s, may by now know all of the branch secretaries personally. He will know who their delegates will be, and could even employ many, or most of them, in the Free State Provincial Government. He will not need an advanced diploma in rocket science to get them to support Dlamini-Zuma. He will just have to follow the ANC’s constitution.

However, it may be important to consider what could happen if, in the hours after the announcement of the leadership contest, the loser were to go to court. This is difficult to predict. So high are the tensions that it may be reckless to not expect some chaos on the conference floor itself. Then the loser would be in court urgently, presumably the next day. This court would be the High Court in Johannesburg (usually on Floor Six if you ever need to know).

That courtroom would be packed, and would start with the inevitable request to broadcast proceedings live. The test for urgency in our system is usually “irredeemable harm”, in other words harm that cannot be repaired unless it is repaired immediately. Surely, due to the stakes involved, the court would grant that, and hear the merits. Then the judge would be in the unenviable position where both parties would want a ruling immediately, but it would be a ruling that must be correct. No judge likes having a ruling overturned, and any decision would surely be appealed later.

In the end, presumably, it would be the Constitutional Court which would make a final decision (one hopes the good Justices are not planning to leave the country over December and January, we may need them). The court has shown that it will hear a case on an urgent basis in the past (it did in the Ramakatsa case, and has in applications involving evictions), and would surely be aware of how important a final decision would be here. With a bit of luck, you might get a final decision about three weeks after the conference ends (and considering that it would be over the festive season, a lot of luck would be required).

However, in the meantime, our politics would not stand still. The ANC, in effect, would have no leadership. There would be no one at the conference with the political or legal legitimacy to call for order. In a worst-case scenario for the party (and this is very unlikely) you could even just see it collapse. There would be around 5,000 delegates in one place with no one to lead them. In the end, the only people with authority would be provincial leaders. They may be able to fashion some kind of interim agreement to hold things together, but it could be difficult.

And the final legal decision may take much longer. In the meantime, there would possibly be no political check on Zuma’s power. He would probably be able to do what he wants in government. Parliament would not be in session, and the only way to stop him from acting would be to go to court on each and every single decision. If he thought he was going to lose, his critics would expect him to get up to things that would be very damaging to the country.

However, the most real, long-lasting damage would probably be done to the ANC itself. Were a dispute to get to court, and be settled by a judge, those who supported the loser may well just leave the party. It would not happen immediately, but it would be a process where people do not renew their membership. At the same time, the party would lose more of its ability to fight an election. Time would be ticking away, with opposition parties calling every day for an early election. And to make matters worse, the loser of the court ruling may refuse to accept the outcome. They may go off in a huff and start their own operation, claiming it is the “real ANC”.

All of this puts into sharp relief one of the other big questions of 2017. Which is whether, come Christmas Day, there will actually still be only one ANC. DM