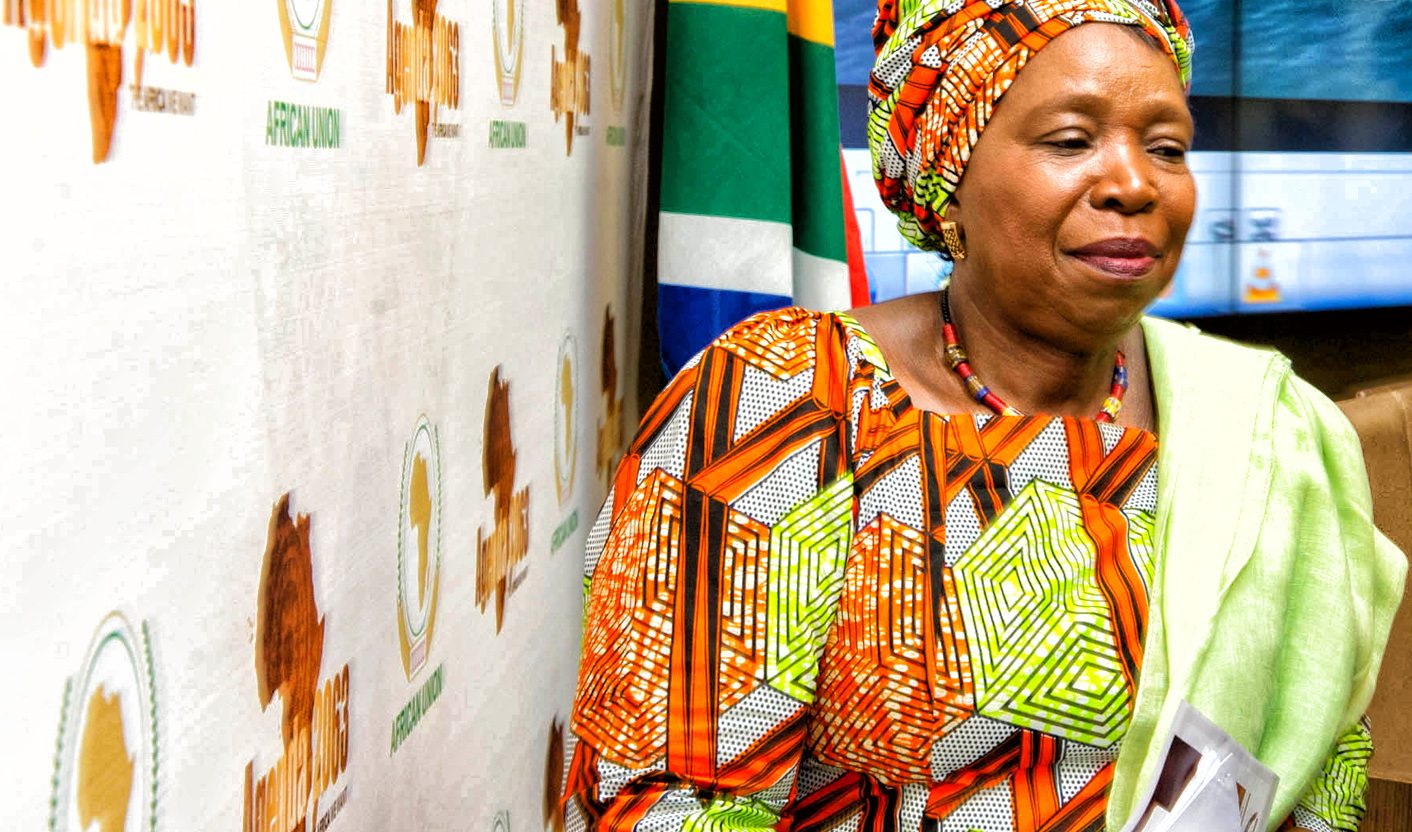 Parliament is a political institution where not only broader dynamics of South Africa’s body politic play out, but also the factional power-plays of the governing ANC. And that political character, rather than its legislative or oversight mandate, is again front and centre with the arrival of Nkosazana Dlamini-Zuma, the former AU Commission Chairperson and ANC presidential hopeful, alongside Matthew Wolmarans, the ex-Rustenburg mayor whose 2012 murder conviction was overturned and set aside three years ago. By MARIANNE MERTEN.

Nkosazana Dlamini-Zuma’s return to Parliament has fuelled speculation that she’s headed for a ministerial post in yet another Cabinet reshuffle, word of which hit the grapevine last month after the no confidence motion that was defeated by a narrowing margin compared to the previous ones. As the contest for the ANC top post heats up, the argument in some circles is that a Cabinet post for Dlamini-Zuma, previously minister of health, home affairs and foreign affairs between 1994 and 2012, would strengthen her standing come the party’s December elective national conference.

But for that to happen she must be an ANC MP as President Jacob Zuma has already appointed the maximum constitutionally allowed two Cabinet ministers without a parliamentary seat – Water and Sanitation Minister Nomvula Mokonyane and Public Works Minister Nkosinathi Nhleko, both widely regarded as staunch allies of the president.

Cabinet reshuffles are a presidential prerogative and, unlike some eager ANC members would like to have it, are not announced via Facebook or other social media platforms. Until there is a presidential public announcement, the speculative permutations are endless.

But what the March midnight Cabinet reshuffle showed was an intricate interconnection between deployment to Parliament as a stopover to a potential executive appointment.

The South African Communist Party (SACP) publicly blew the lid on Brian Molefe being considered for finance minister. The former Eskom Chief Executive was sworn in as ANC MP in late February 2017. Some three months earlier he publicly announced his stepping down from the power utility in the interest of good governance after the Public Protector’s November 2016 State of Capture report linked him through telephone calls to the Guptas and their business associates as Eskom was negotiating a coal deal with one of their aligned companies.

Ultimately Molefe’s ascent was blocked by objections from, among others, the SACP, and he resigned from Parliament in May to controversially, but ultimately unsuccessfully, try to return to Eskom. The matter now is before the courts.

But the case of Molefe is not an exception. In September 2015 Mineral Resources Minister Mosebenzi Zwane moved within three weeks from being Free State Agriculture MEC to the mining Cabinet post. According to City Press, his departure from the Free State was kept under wraps for some two weeks until Premier Ace Magashule, a staunch Zuma supporter, reshuffled his provincial executive on 18 September 2015. A day after the Free State public representative candidate list was amended on 2 September 2015, Zwane was sworn in as MP and on 23 September Zuma announced his appointment to Cabinet.

Deputy Finance Minister Sfiso Buthelezi had to wait somewhat longer. Already on the KwaZulu-Natal ANC public representative candidate list, he was sworn in as ANC MP in late February 2016 to replace communications committee chair and SACP treasurer Joyce Moloi-Moropa, and assigned to the finance committee from where he was appointed into the executive some 13 months later.

And so Parliament is regarded, at least in some circles, as a placeholder within the greater factional politicking of the governing ANC. But it is also in some circles regarded as a political lifeline or consolation prize.

North West has now sent Matthew Wolmarans to Parliament to take up Molefe’s vacant parliamentary seat. And while some in the ANC parliamentary caucus are unhappy, there is nothing stopping Wolmarans’s swearing in, possibly as early as this week. As a full Bench of the Mahikeng High Court in June 2014 overturned his 2012 conviction for the murder of whistle-blower Moss Phakoe three years earlier, Wolmarans’s criminal record has been set aside, or bluntly put, wiped clean.

However, it might yet get a bit awkward for him. Parliament’s environmental affairs committee is still looking into a 2015 North West game farming deal involving Wolmarans, Mike de Kock, a businessman said to be close to North West Premier Supra Mahumapelo, and others. In 2015 the Sunday Times reported the deal involving the donation of prize animals worth R100-million from state-owned game reserves, including rhino, buffalo and sable antelope, to Southern Africa Rare Game Breeders Holdings without ever being advertised or put to tender.

On 31 March this year Parliament’s environmental committee publicly said it took exception to North West Rural, Environment and Agricultural Development MEC Manketsi Tlhape having “refused permission” after initially giving it to three scientists to attend an oversight meeting in Pretoria. MPs were to be briefed by the scientist to help finalise their probe into this game donation that had started in November 2016.

Wolmarans, according to City Press, is the North West hopeful for the executive. There is a vacancy arising from the resignation of Mduduzi Manana as deputy higher education minister following his admission of beating a woman for which he is now standing trial.

Manana remains an ANC MP as he has not resigned from the national legislature regardless of the grievous assault criminal charges he is facing. He sits on the ANC parliamentary benches with former Buffalo City metro mayor Zukisa Faku, who is understood to be pursuing the right to appeal in higher courts against an East London regional court sentence of three years house arrest and community service for misusing her council credit card. Leave to appeal had been refused by that court in October 2016, according to DispatchLive. And so until that legal action has run its course she remains an MP, as is former Gauteng MEC Humphrey Mmemezi, despite his public acknowledgement that he misused a government credit card. In the wake of that scandal he resigned from office in December 2012, but re-emerged on the ANC’s May 2014 election candidates list, approved by the party leadership.

That the ANC parliamentary caucus is also embroiled in the party’s factionalism heightened amid the leadership contest ahead of the party’s December national elective conference is an open secret. It was acknowledged by ANC Chief Whip Jackson Mthembu in an interview with Daily Maverick last week. “The factions in the ANC don’t make it easier; they are also playing out,” he said, urging for considerations of how to deploy the best possible candidates.

Those factional divides often play out in public in and across committees at Parliament, most notable over an institutional directive to four committees in mid-June to “urgently” probe #GuptaLeaks claims, interact with ministers and report back to the National Assembly.

This directive comes against the background of the Constitutional Court Nkandla ruling in March 2016 that Parliament had acted “inconsistent with the Constitution” by replacing the Public Protector’s binding remedial action that Zuma should repay a percentage of the non-security upgrades at his rural homestead with one of its own, absolving the president from any repayment.

However, progress has been varied. The mineral resources committee will only co-ordinate diaries with Zwane after returning from the constituency break next month. There is still a question mark over whether former Home Affairs Minister Malusi Gigaba, now Finance Minister, will appear before the home affairs committee to brief MPs on his role in using a legislative exemption clause to grant several members of the Gupta family naturalised citizenship. It’s unclear what the transport committee is doing. Meanwhile, the public enterprises committee earnestly has pursued an inquiry into at least Eskom and its various coal deals with Gupta-aligned companies, although a date and firm terms of references remain outstanding.

It’s a complex maze of machinations that is unfolding in many layers at Parliament, the political institution, where political parties wield great power – from determining the lists of their public representatives to discipline. DM