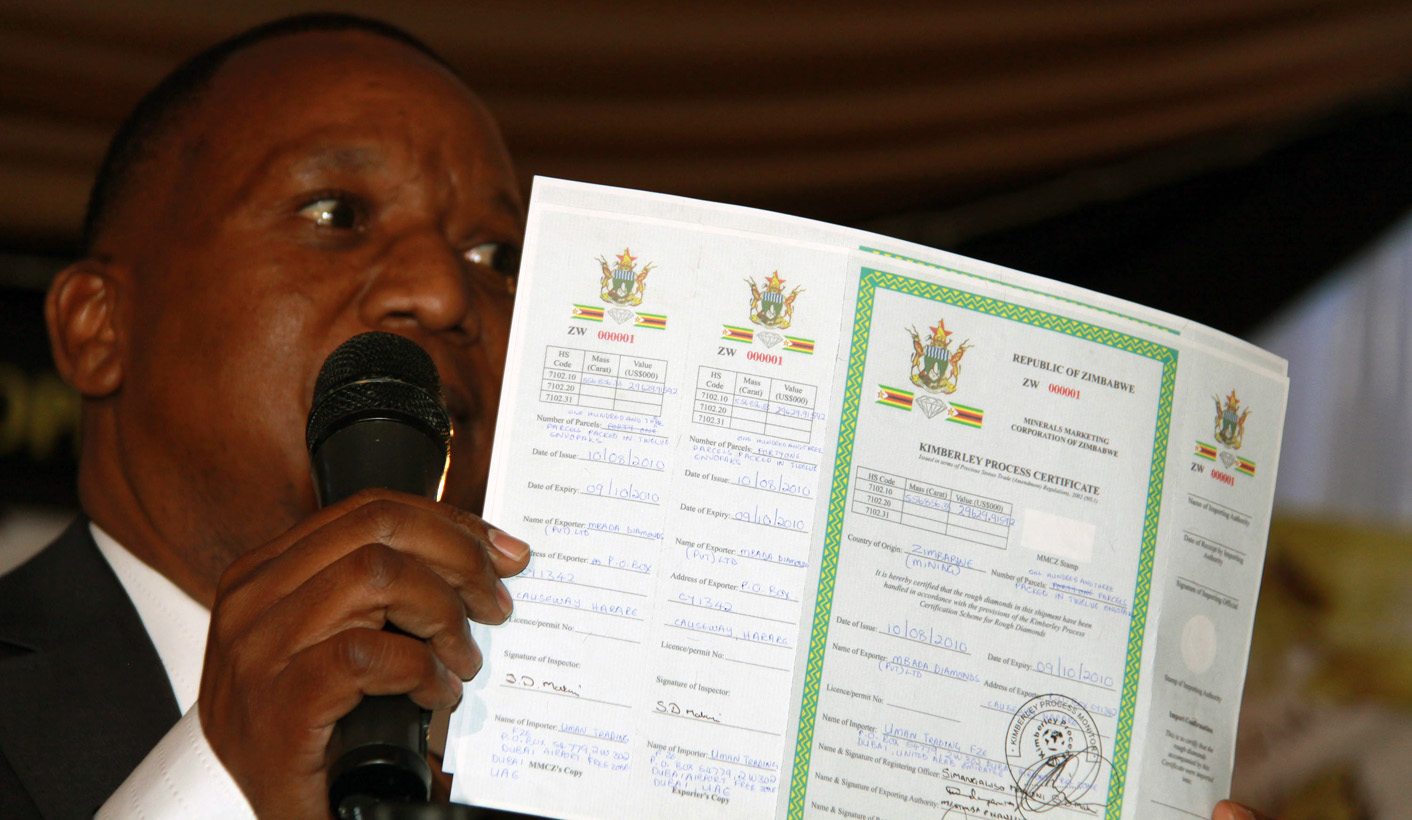 Political elites and security services have captured the companies mining Zimbabwe’s Marange diamond fields and siphoned off billions, even as the government blames private companies for crucial data gaps in its accounts, a report released on Monday alleges. KRISTEN VAN SCHIE reports.

“From the outset of the Marange discovery, Zimbabwe’s diamond mining sector has been shrouded in secrecy with poor governance underpinned by a lack of transparency and accountability,” the report, titled “An Inside Job”, reads. “Inside a closed industry, chronic mismanagement and diverted diamond proceeds have provided off-budget funds to those who have stifled dissent and democracy in Zimbabwe.”

First discovered in Zimbabwe’s far east in 2006, the Marange diamond fields have been repeatedly linked to corruption and human rights violations.

The armed forces were accused in 2008 of brutally evicting thousands of artisanal miners who had flooded the area after diamonds were discovered, while in 2011 activists claimed the diamonds were being used to fund President Robert Mugabe’s presidential campaign.

A report by Partnership Africa Canada (PAC) alleged in 2012 that about $2-billion in diamond revenue had been stolen by Zimbabwe’s political elite.

“The scale of illegality is mind-blowing,” that report said.

That there are gaps in the financial reports is something the activists and government agree on.

A 2013 report by the country’s own parliamentary portfolio committee on mines and energy pointed out “irregularities and loopholes in the entire diamond value chain”, with clear discrepancies between the government’s books and figures provided by mining houses.

In an interview with the state broadcaster last year, Mugabe himself decried this mismatch and announced plans to nationalise the country’s diamond mines, saying, “We have not received much from the diamond industry at all… There has been quite a lot of secrecy… The companies that have been mining have virtually robbed us of our wealth.”

But with the state already owning at least a 50% stake in all mining operations at Marange and itself responsible for oversight, “any heist… started closer to home”, says Global Witness.

At Kusena, which is owned by the state’s Zimbabwe Mining Development Corporation (ZMDC), Global Witness says it uncovered documentary evidence suggesting the company was set up by Zimbabwe’s feared secret police, the Central Intelligence Organisation (CIO), “to secure a secret off-the-books source of financing”.

Anjin Mining, meanwhile, is indirectly owned by Zimbabwe Defence Industries (ZDI), a state arms manufacturer on several sanctions lists. “Nevertheless, Anjin diamonds have been tendered within the EU, likely in violation of the EU sanctions placed on ZDI,” says Global Witness. “Jinan… was effectively run as an extension of Anjin… potentially providing the Zimbabwean military with still further access to diamond revenues.”

The group claims DMC’s backers previously formed a “highly organised network of smugglers that had been illegally ferrying Zimbabwe’s diamonds out of the country”, while stripping back the complex ownership structure of Mbada Diamonds revealed ties to a close associate of Mugabe’s, Robert Mhlanga.

Of the $2.5-billion in diamonds Zimbabwe has officially exported since 2010, only $300-million is clearly marked in public accounts.

Even with those figures, it’s difficult to tell just how much ordinary Zimbabweans should have benefited.

“Information about operating costs and re-investment is not available, making it impossible to calculate the profits that remain to be shared by the treasury and private companies,” reads the report. “Greater transparency is needed not only to identify missing revenues, but to determine how much should have reached the treasury in the first place.”

Neither the government nor any of the companies named in the report responded to the claims.

Global Witness’ Michael Gibbs said Zimbabweans deserved to know how much money has been made from their diamonds – and where that money has gone: “There are clear indications of state complicity in the expropriation of these critical resources. Given how opaque and secretive the sector is, what we have uncovered is likely just one symptom of a much wider problem.” DM

Photo: In this file photo, Kimberly Process monitor, Abbey Chikane, holds the Zimbabwe Kimberly certificate during the relaunch of its diamond exports from its eastern Chiadzwa fields in Eastern Zimbabwe during an event in Harare on 11 August 2010. Zimbabwe was given authority to sell diamonds from Marange and was then auctioning 4.5 million carats. Photo: Aaron Ufumeli/(EPA)