Reporter’s Parliamentary Notebook: Ramaphosa drops mysterious hint on sex emails as he talks up SA in the House 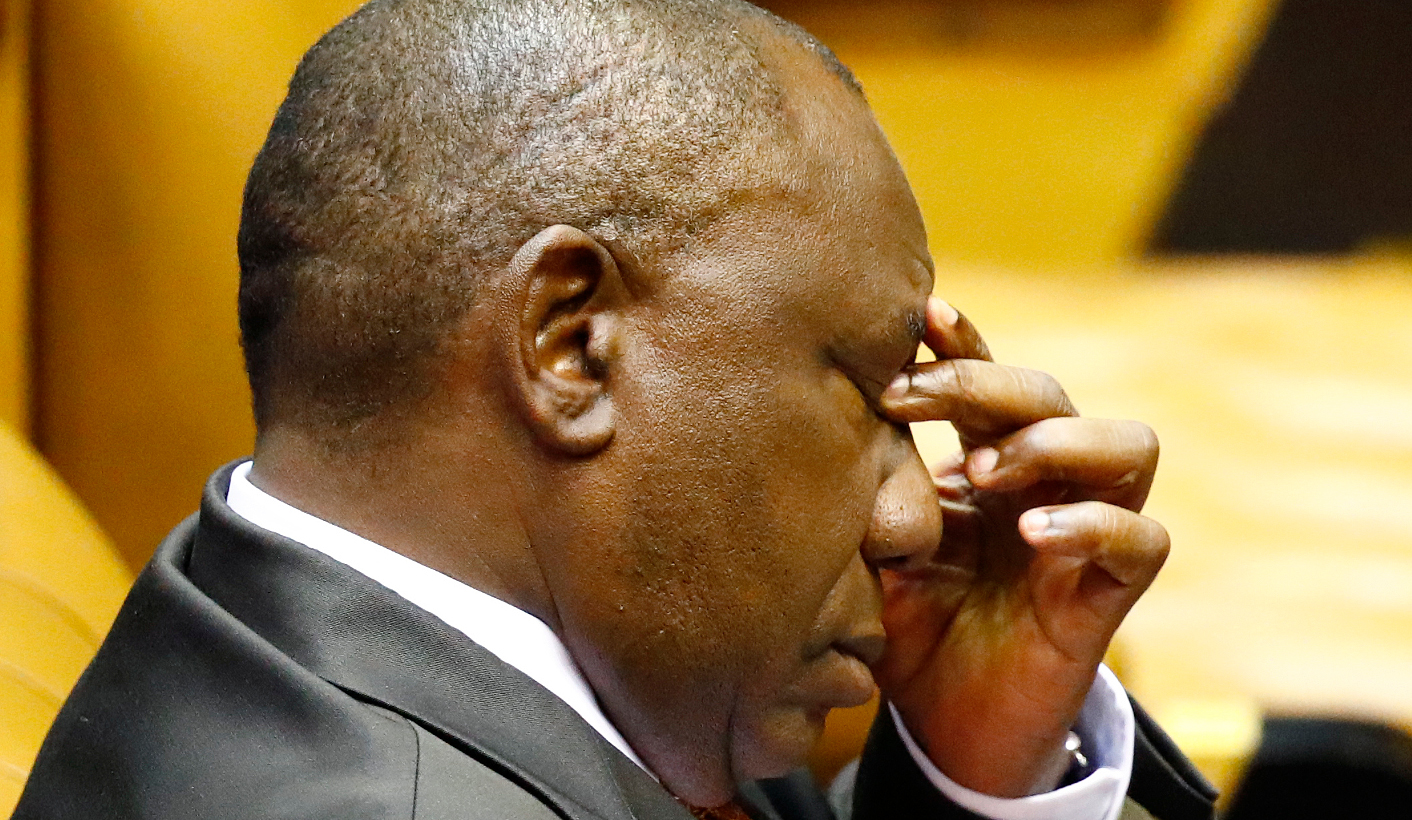 Deputy President Cyril Ramaphosa on Wednesday hinted at a further statement over the Sunday Independent write-up of leaked emails on extramarital affairs. “I thought I should do something unprecedented and start off by addressing a matter which has embroiled me… because I work with all of you across party lines. I will be addressing this matter in a day or two… I do need to take responsibility and be accountable,” he said, days after denying all but one affair in a statement describing an escalating “dirty war”. His office maintained silence when asked in the House about the allusion. By MARIANNE MERTEN.

In an eminently forgettable question time in the House, Cyril Ramaphosa’s mysterious hint proved the most interesting statement. A rather flat deputy president relied on his trademark tool of talking up South Africa, working together and building confidence – and citing statistics underscoring South Africa’s progress, like Tuesday’s 2.5% gross domestic product (GDP) growth that lifted the technical recession.

But the politicking was never far away. The EFF pointed out that Deputy Speaker Lechesa Tsenoli twice referred to Ramaphosa as president – “Don’t bring your factional battles here. He’s the deputy president!” – and remarked that Social Development Minister Bathabile Dlamini was drinking “greenish stuff” in the House, against the rules.

“We have in the past advised members not to bring drinking stuff in the House,” ruled Tsenoli, which got IFP MP Liezl van der Merwe taking the mic to plead consistency: “When I brought a cool drink into the House you were very harsh and chased me out.” Dlamini did not move.

When Tsenoli disputed Van der Merwe’s take and cautioned mindfulness to the truth, “even if it pisses you off”, DA Chief Whip John Steenhuisen was on his feet in a flash to object to unparliamentary language that “starts with a ‘p’ and ends with an ‘s’ and it has to do with urination”. No, replied Tsenoli, “no, it means (that) it makes you angry… But I withdraw.”

It’s a scrappy rush as Parliament is hurtling towards its two-week September break so MPs can spend time in their constituencies after a high-pressure push to finish parliamentary business. And so, other than processing a range of arts and culture committee oversight visits, the National Assembly on Wednesday adopted the SABC board nominations with 194 votes for, 76 against and nine abstentions.

In their pre-vote declarations opposition parties highlighted several nominees’ close ANC ties and raised fears of negative impact of the governing party’s cadre deployment that had previously landed the public broadcaster in governance and financial pickles. The DA, EFF, IFP, United Democratic Movement (UDM) and African Christian Democratic Party (ACDP) objected to Krish Naidoo, who resigned from the previous board amid deepening controversy in October 2016, and Febe Potgieter-Gqubule, former deputy chief of staff of then AU Commission Chairperson Nkosazana Dlamini-Zuma and member of the ANC National Executive Committee (NEC). The DA also objected to two others.

Both Naidoo and Potgieter-Gqubule are part of the interim SABC board, whose term expires at month’s end, and which is praised widely for their work under Chairperson Khanyisile Kweyama and her deputy Mathatha Tsedu.

The recommendations for the 12-stong SABC board were completed under great time pressure before Thursday’s last sitting for the month and now go to President Jacob Zuma for official appointment, and determination as to who would be chairperson.

Elsewhere on the parliamentary front the public service and administration committee got an acting chairperson. ANC MP Makhosi Khoza was relieved of that position amid her outspokenness on voting with conscience during last month’s no confidence motion, as was party colleague Mervyn Dirks, one of five ANC MPs now facing disciplinary action for boycotting the committee over their objections to Khoza.

That committee now has a week or so to catch up the time it did not sit, including scrutinising Minister Faith Muthambi’s spending to fly relatives to Cape Town and hiring them as staff. The minister has denied this. Ramaphosa sidestepped questions as to why Muthambi was not in the House to answer and account, saying the matter was correctly before the committee to deal with it.

That’s all well and good on paper, but not necessarily in reality. International Affairs Minister Maite Nkoana Mashabane failed to keep her Wednesday date with MPs, saying the saga surrounding Zimbabwean First Lady Grace Mugabe’s assault could not be discussed because of pending court action. DA MP Stevens Mokgalapa was fuming: “…(O)versight and accountability cannot be overruled by this sub judice rule and this is a poor attempt by the minister to escape accountability.”

And there’s still no date for a meeting between the mineral resources committee and Mineral Resources Minister Mosebenzi Zwane to talk state capture as he’s been pinpointed in the #GuptaLeaks. The minister is in Australia and the committee indicated it would co-ordinate diaries after the constituency break. The minister would be “squeezed” in between oversight visits and the looming budget review and recommendation report process, according to committee chairperson Zet Luzipho.

Meanwhile, the finance and trade and industry committees have started panel-beating their joint interim draft report on financial sector transformation for adoption and debate next month. Earlier in 2017 the two committees spent 25 hours hearing 62 public submissions on transformation and empowerment in the financial sector. Now the wide-ranging draft recommendations include setting compulsory targets of black African, women and youth, particularly in new applications in the banking and insurance sector, 1% black ownership in asset management companies, specified set-asides for empowerment funding, greater support to co-operative banks and a drive to encourage new entrants.

Transformation was crucial – it could not be allowed to continue at a snail’s pace, said committee chairperson Yunus Carrim – and if consensus could not be reached, government and Parliament needed to step in.

Among all the politicking, meetings and other stuff, a swathe of parliamentary replies is being released. Wednesday’s batch included one in which Police Minister Fikile Mbalula said his department spent R599,277.50 to fund former national police commissioner Riah Phiyega’s review of the Marikana commission of inquiry report. This legal action was not completed when Phiyega’s term of office expired last month, effectively ending any further claim on governmental obligations to cover legal expenses.

And Arts and Culture Minister Nathi Mthethwa appeared via video link from Pretoria to launch September Heritage Month, to contribute “to the revival of the political and social-cultural consciousness across the country on the liberation struggle narrative”.