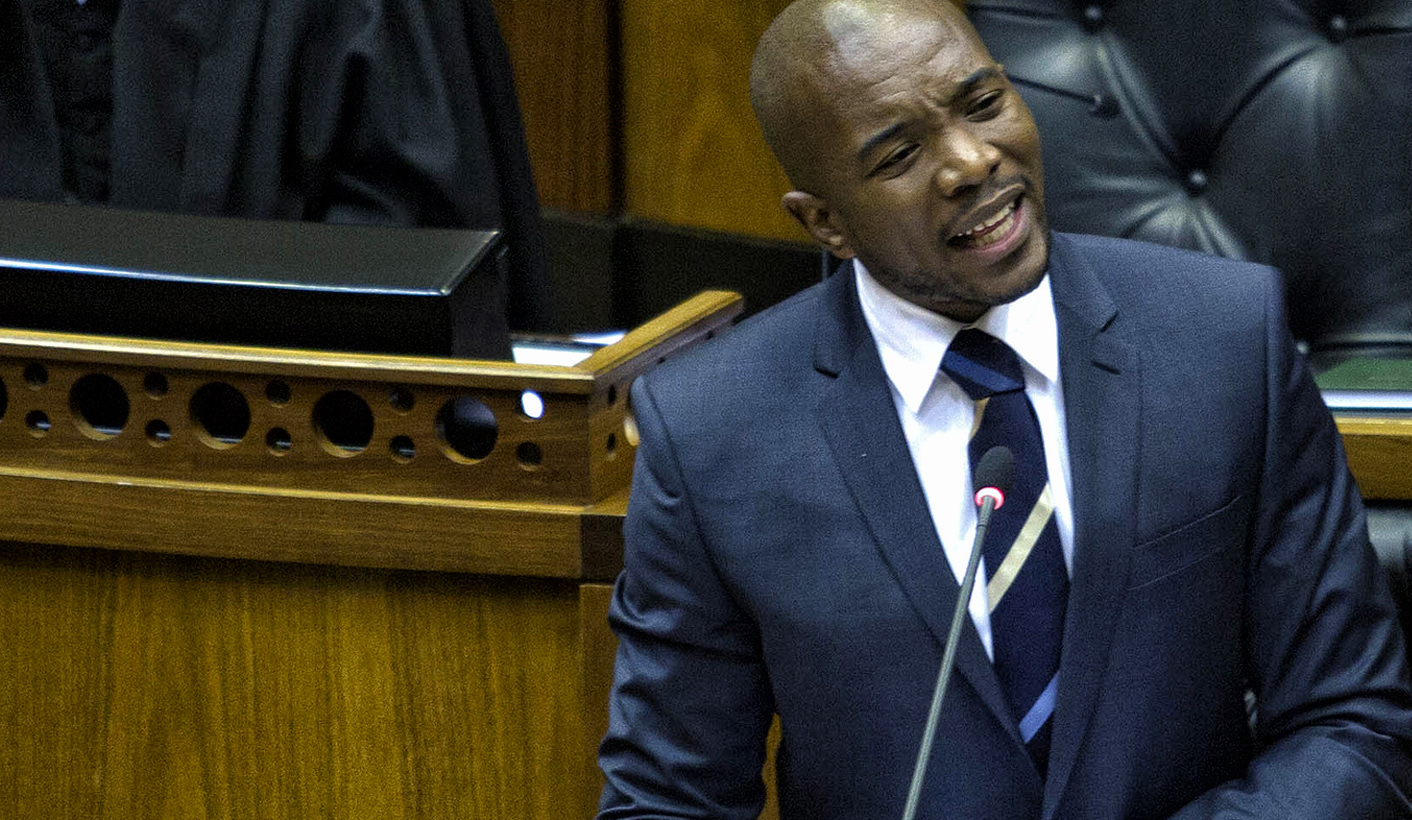 When it comes to damp squibs, it was hard to imagine a damper squib than the Democratic Alliance’s motion to dissolve Parliament and hold early elections. A debate held to discuss the motion in the National Assembly on Tuesday saw the leaders of several political parties absent and the vote on the motion soundly defeated. The DA also came in for a drubbing not just from the ANC, but other opposition parties. That heartwarming moment of opposition unity we saw last month? That’s over, at least for now. By REBECCA DAVIS.

It’s hard to believe that the National Assembly vote of no confidence in President Jacob Zuma took place less than a month ago. Arguably the high water mark for the opposition in the fifth Parliament, that display of unity and strength felt very far away indeed on Tuesday when Parliament debated the DA’s motion to dissolve Parliament and hold early elections.

The outcome of the vote was a foregone conclusion. The DA’s motion had been roundly criticised by analysts and politicians outside the blue party. It was a stunt that smacked of a desperation to capitalise on the sense of momentum coming off the 8 August attempt to oust President Jacob Zuma, but in a pointless and ill-conceived way.

It was a sign of how little regard the ANC paid the motion that they did not bother to send out any heavyweight speakers to do battle for the ruling party in the debate. ANC MPs Richard Mdakane and Lindiwe Maseko were tasked with verbally smacking down the DA’s proposal, and did so without particular force.

“Who has given you such bad advice to table such a motion?” was Mdakane’s rhetorical inquiry of the DA, and it was a question that seemed to be on more than one mind.

Even the DA caucus exhibited a certain lacklustre spirit about the endeavour. Their leader, Mmusi Maimane, was not present. This was a fact presented several times by other parties as evidence of the DA’s ambivalence about the motion – though Maimane’s spokesperson Portia Adams subsequently clarified to Daily Maverick that Maimane was overseas, on a trip scheduled before the motion was put on the National Assembly’s calendar.

DA Chief Whip John Steenhuisen did his best, presenting the party’s case with customary energy. Steenhuisen took a trip to Ancient Greece to collect a structuring metaphor for his address from Prometheus: “Whom the gods seek to destroy, they first make mad”. Madness is rife under the administration of Jacob Zuma, Steenhuisen suggested: manifested in everything from the unlawful enrichment of the president and his family to the axing of competent finance ministers.

Steenhuisen threw in a Game of Thrones reference to describe current Finance Minister Malusi Gigaba, characterising him as a “grinning Lord Baelish” slavishly executing the orders of his king. (‘Thronies’ may quibble with that analogy.)

The DA chief whip also painted a picture of an ANC caucus in factional disarray. “Committee meetings are cancelled because ANC members cannot stand to be in the same room as each other,” Steenhuisen charged. “We have seen them tearing each other apart in the Home Affairs committee, the Public Enterprises committee, and the Public Service and Administration committee.”

Through the motion to dissolve Parliament, Steenhuisen suggested, South Africa had a chance to push the “reset” button and avoid another two years of Zuma’s government pushing the country closer to the brink.

“The ANC can no longer be trusted to govern. South Africans have had enough. This is why the motion to usher in new elections must be supported,” he said.

But other opposition parties felt differently, ushering in criticism of the DA on a scale that we haven’t seen for a while in the National Assembly.

“Grandstanding” was the accusation of the day. The EFF’s Floyd Shivambu even suggested that the DA had scuppered the 8 August vote of no confidence in President Zuma through “basic mistakes” and “grandstanding to gain glory”. Shivambu accused the DA of undermining the opposition through Tuesday’s motion, and advised the party that if it continued “on this path of self-destruction” it risked further alienating potential allies.

The United Democratic Movement’s Nqabayomzi Kwankwa likened the DA to the ANC in terms of its disrespect for “mechanisms of the Constitution”, and suggested that the motion was unnecessary for another reason.

“Let us give the ANC enough rope to hang themselves,” Kwankwa offered, to roars of approval from the Freedom Front Plus.

The DA’s motion was “irrational”, said the FF+, while “opportunistic and not in the best interests of the country” was the preferred label of the African Christian Democratic Party.

More than one opposition politician pointed out the logistical nightmare that would ensue if South Africa had to hold a general election in 90 days’ time. MP Pieter Groenewald, from the FF+, reminded the House that more than 266,000 workers had to be trained by the Independent Electoral Commission before the last elections. The cost of holding three sets of elections within five years (one national and two local) would also be astronomical.

Two opposition parties did express support for the DA’s motion, albeit with some reluctance. On behalf of the Congress of the People (COPE), Deirdre Carter said that the party would support the motion because “Parliament has lost its credibility and moral legitimacy”. For Agang, Andries Plouamma suggested that if Parliament was not dissolved, “we might as well start negotiating extraditions with Dubai” – a reference to President Jacob Zuma’s alleged bolthole.

The DA’s Zak Mbhele suggested that the reluctance of some parliamentarians to get on board with the DA’s motion might be due not to principle, but a desire to protect the perks of an MP lifestyle.

But the EFF’s Shivambu seemed to sum up the prevailing spirit: “There is no one who needs to destroy the ANC from the outside, because it is excellent at doing it itself with the Guptas,” he said. “It is easier for a camel to pass through the eye of a needle than for the ANC to rescue itself from the current crisis.”

When it came to the vote, the motion was easily defeated: 83 in favour, 229 against, and 7 abstentions. Nobody sensible would have predicted a different outcome – not even the DA. Steenhuisen had already appeared to acknowledge such a result in his concluding words, earlier in the afternoon.

“Know this,” the DA’s Chief Whip warned. “Whether this motion succeeds or fails today, the people of this country are crying out for change.” DM