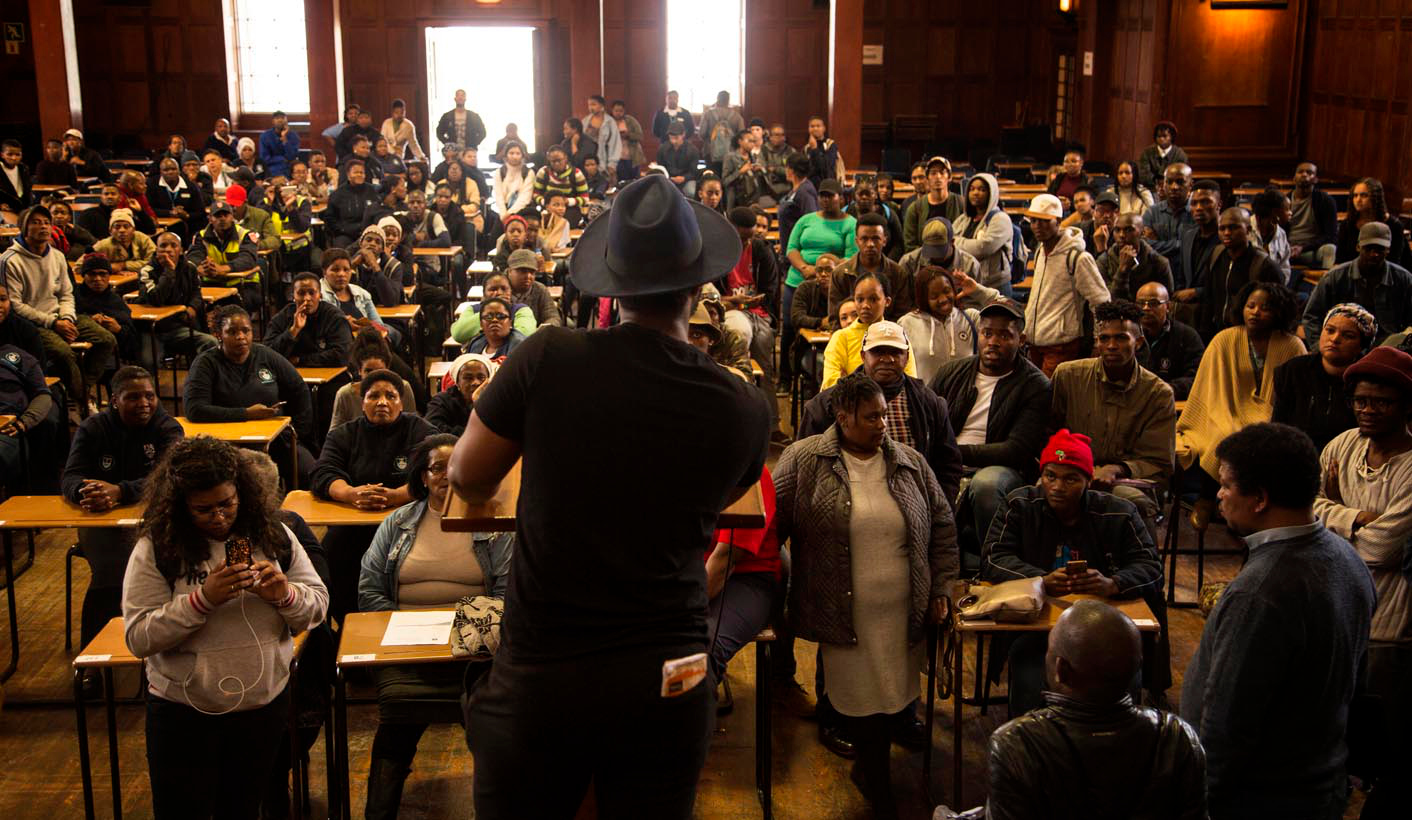 Uncertainty was the order of the week at UCT, with each day raising fresh rumours of strikes and protest action. Wednesday was expected to bring a shutdown, then abruptly didn’t; Thursday was to bring a strike, which was interdicted. But tension, and the possibility of a student shutdown on Thursday, remains. What’s actually happening? By MARELISE VAN DER MERWE and LEILA DOUGAN.

The long and the short

Following a week of back and forth, there was no shutdown at UCT on Wednesday. Ultimately, the mass meeting did not draw the same crowds as the earlier rounds of campus protests had. But SRC representatives said they would be holding an urgent meeting later in the day to decide whether to proceed with a university shutdown on Thursday.

Students did not face the same potential legal ramifications as the workers, reasoned SRC member Sinawo Thambo. The SRC would confirm with students by email on Wednesday night whether a shutdown would go ahead on Thursday.

Meanwhile, President Jacob Zuma has not given any clarity on when he is releasing the report issued by the Fees Commission, beyond saying he will discuss it “in due course”. The DA Student Organisation (DASO) has called on the President to release the report within 10 days, to facilitate advocating for the funding model recommended in the report.

South African universities have been paying the price of continued instability, believe researchers. UCT and Wits both slid in the Times Higher Education rankings, announced this week.

Is the strike on or off?

According to speakers at the meeting, it’s still on. UCT was able to interdict the South African Liberated Public Sector Workers Union strike, which was planned for Thursday morning, on technical grounds, based on insufficient information given. “While Salipswu (the union) has alerted management of the intention to strike, it has offered no timing, no details of the format of the strike or demands,” Vice-Chancellor Max Price said in a statement on 5 September.

According to Agulhas, the next step is to file a fresh notice. “The only problem is that every time you file a notice, it takes 48 hours,” he said. “If we go back today and file again, it takes 48 hours before we can strike. That is the technical part of it.”

The student action is less certain. While the numbers at the mass meeting were not overwhelming, they were not insignificant either, and protesters will be aware that making an impact will require more than an irritable sneeze. The timing, too – towards the end of the year – is significant.

If students are planning a shutdown, and if they wish to align it with the workers’ strike, it may be later than Thursday. If, however, they aim for a more sustained impact, the timing and length of the protest action is anyone’s guess.

“It is important to note that we have no certainty about what might occur,” said Price.

Agulhas was adamant that the unions would keep all action strictly legal. “We don’t want to be distracted by technical issues. It’s important for us to follow correct procedure – in this case, as proposed by UCT,” he said.

Why are the students and workers protesting?

The strike is focused on worker issues. That being said, South African Liberated Public Sector Workers Union representative  Abraham Agulhas told Daily Maverick that students and workers had an alliance because “we think our interests are not that different”. Students have been airing their grievances as well as supporting employees.

Outsourcing was a major bone of contention during the initial round of #FeesMustFall protests. Currently, the strikes are centred on the structure of shifts and the payment for those shifts. Around 60 people are working four-hour shifts but want 7.5-hour shifts, rather than having the extra hours picked up by casuals. Additionally, they want double pay on Sundays and public holidays, and not to work too many days back-to-back. Some colleagues work 11 days consecutively, said Agulhas. Last, pregnant women should be protected from health risks of shift work, he said.

“UCT has been delaying this issue. We started about five months ago with the negotiations… they [management] did not come to the table. We told Max Price today: You are here, but your team – whoever you sent – is not serious about these negotiations, because the only thing we get is process all the time. This committee can work and maybe come with solutions, but there is no result. That is why we went to the CCMA,” he said. “This shift we are working is detrimental to our health. We have comrades that are in hospital due to this shift. [It] is not a healthy working environment and we are not properly compensated,” said Agulhas.

UCT has come under fire for large bonuses paid to the executive at the end of 2016. Price took home R2.5-million.

Twenty-three students are still on a grace period for outstanding fees and have until 15 September 2017 to pay the full amount from 2016. They are not yet registered for 2017 because they still owe 2016 fees which were due on 30 June 2016, the UCT executive said in an email on Monday. “They have nevertheless been granted extra time to pay their debts and allowed to attend classes, access the library and VULA, and course assessments in the meantime,” the executive said.

Initially, added the university, 180 students were granted a grace period and 157 paid their 2016 fees by the original deadline of the start of the second semester. However, the SRC subsequently approached the Executive Director of Finance and requested a further extension as they were in the process of fund-raising for the remaining 23 students. “On that basis, the grace period for all 23 students was then extended to 15 September 2017 and we have supported the SRC by providing access to all necessary information for its fund-raising drive. We continue to work through these issues within RRTT,” the executive said.

It noted the existing financial aid provided by UCT and other funders. “In 2016, a total of 3,707  students were assisted with financial aid from NSFAS and  UCT [sic]  own funding, and a further 3,218 by external bursaries (corporate),” it said. “This represents almost 40% of all undergraduate students in 2016.”

How are the negotiations going?

That depends on who you ask. It’s worth asking what the effect will be of interdicting the strike and whether that will diffuse tension or simply inflame it.

UCT management has consistently said it is satisfied with the progress of the negotiations. In a statement on Wednesday morning, the executive praised the withdrawal of the notice to strike, calling it “a genuine attempt to resolve outstanding issues in dispute”.

“We are pleased that we have been able to agree on a process of further engagement, and that we now have an opportunity to address the outstanding issues of concern to labour,” the executive said. “The Vice-Chancellor and senior members of the management team are currently meeting with the unions, and UCT is committed to a further process of engagement to resolve the issues.”

At the mass meeting, however, the tone was more frustrated. “This is just a tactical withdrawal,” said Agulhas. “We mean business.” Nonetheless he was adamant that the doors to negotiation would not be closed. “You always negotiate,” he said.

The SRC, meanwhile, said in its last mass communication: “It has now come to our attention that the university has responded in its typical manner of attempting to delegitimise the issues raised through a faux perception of progress made and them being addressed.

“The constant portrayal of irrationality by the university in its statements is saddening and condescending.”

Private security on campus, too – whatever one’s views on it – will be unlikely to end in a Care Bear Stare.

If it’s a shutdown, dire. Exams have already been deferred as far as they can be without compromising the academic year. A total of 6,000 students will not be able to graduate at the end of the year and thousands of school leavers will not be able to start their studies, according to Price.

“There will also be serious financial consequences,” Price said. “If students cannot complete their studies in 2017 and continue in 2018, they will not pay fees for the education they should have completed in 2017. This means that the university could lose R300-million to R500-million in fee income which would not be recoverable. This will have knock-on effects for students on financial aid, staff salaries, the provision of accommodation, and the quality of education.” DM

This story will be updated once the outcome of the SRC meeting is known.