Patrick Gaspard: ‘It’s disheartening to see similarities in regression in the US and SA’ 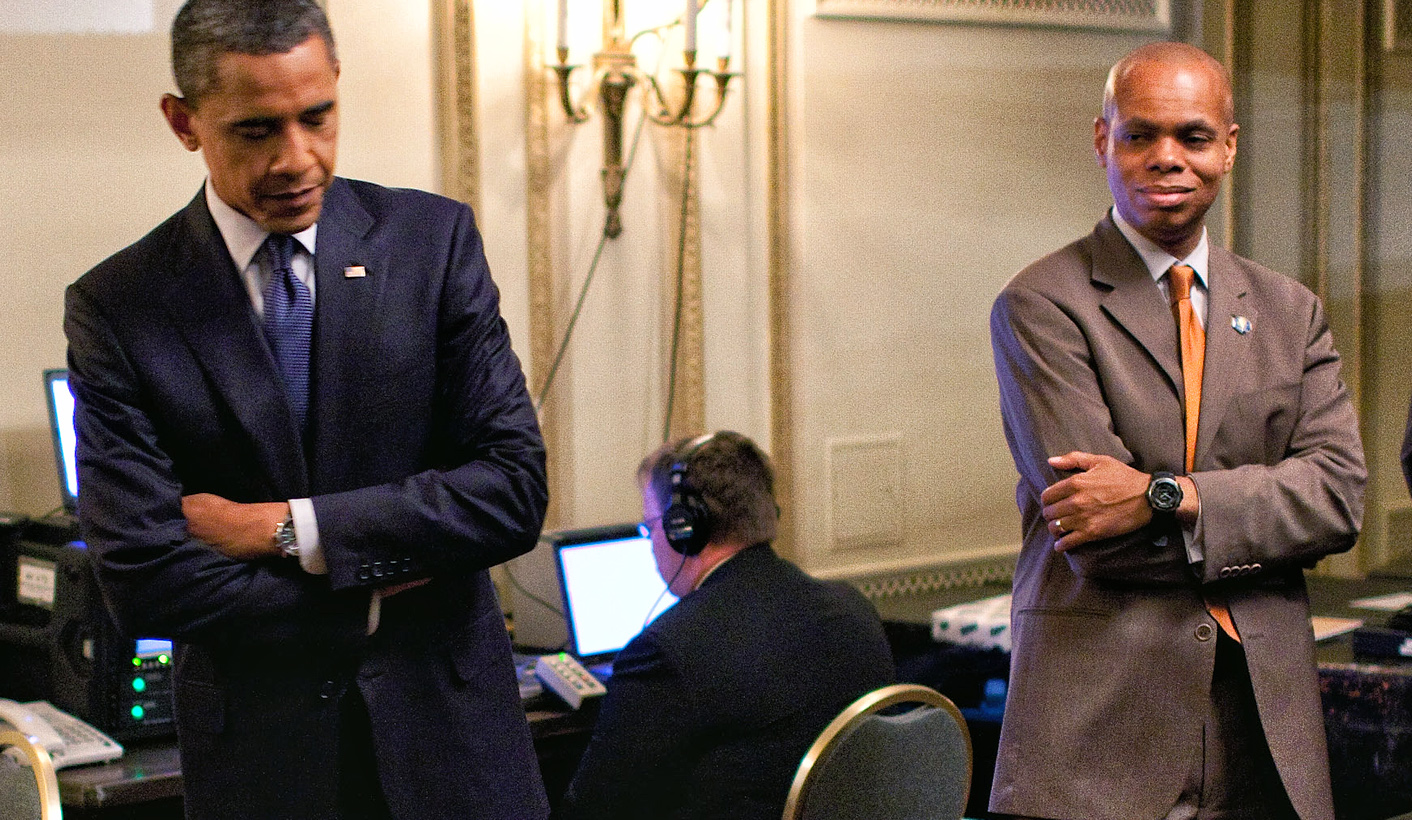 Patrick Gaspard was much more candid, in an interview, about South Africa’s poor economic governance and official intolerance of the media than he was allowed to be as ambassador.

“It’s s a stunning thing to hear at that level that kind of vicious, malicious, almost violent attack from a president in America towards one of the absolute pillars of freedom, openness and inquisitive, responsive democracy.”

It was also stunning that Trump had given encouragement to Philippine President Rodrigo Duterte for his extra-judicial assassinations of hundreds of drug-traffickers.

And it was astounding that Trump had not condemned the “vicious” assault by Turkish President Recep Tayyip Erdo?an’s bodyguards on peaceful protesters outside the Turkish embassy in Washington, when Erdo?an was visiting to meet Trump.

Gaspard also slammed Trump for his controversial recent statement allocating equal blame to violent white supremacists demonstrating against the removal of a statue of the Confederate general Robert E Lee in Charlottesville, Virginia, and to those who demonstrated against the supremacists.

“So these are just a few examples of the daily onslaught to our senses and to our sense of values, principles and rights that we’ve long taken for granted.”

But he was tremendously encouraged by Americans who were protesting against these assaults on America’s values.

Gaspard said this widening polarisation in America society had begun in the mid-1990s when new communication technologies emerged that “shifted the way we communicate with one another”, allowing people to curate their own sources of news and information. That shift coincided with the ascent in American politics of Republican Newt Gingrich as Speaker of the House of Representatives.(leading what he called the Republican Revolution).

“We saw a kind of reactionary politics in the country that seemed to be operating free of facts and outside the historic norms and traditions of bipartisanship and bicameral activity in our legislatures.”

A hardened left wing in US politics responded to this hardened right wing, which was further entrenched by a massive investment in rural radio and the emergence of the conservative TV channel Fox News.

This reactionary politics had been aggravated by the 9/11 terrorist attacks in the US in 2001 and the global economic crisis of 2008, creating both security and economic anxiety which regressive political actors were exploiting, using populist rhetoric and illiberal tactics to shut down civil society space and to restrict the rights of minorities.

Gaspard said he was struck on his return to South Africa by the many current parallels between the two countries.

“So from #RhodesMustFall to Robert E Lee must fall, it’s like Groundhog Day for me. Sometimes I’m not sure which side of the ocean I’m on!” Gaspard joked. But he added, “It’s just disheartening to see some similarities in regression as well, both in the US and in South Africa.”

Independent media in South Africa were facing some of the same challenges as in the US and elsewhere.

“You have some hostilities from government, and.. it’s remarkable to hear some in government using language today that is not altogether different from the language I heard PW Botha use when he talked about ‘agents’ in the media 30 years ago. That’s a bit disconcerting.”

He was also concerned that the latest report released by Stats SA showed 54% of the population were still poor despite an aggressive social grants programme. Many bright young people lacked economic opportunity. “And, as many of us forecast, the economy has indeed gone into recession, downgradings have occurred.”

Gaspard said that considering the lack of execution of the National Development Plan, and the debate in Parliament “which seems to be completely consumed by politics and not policy, I’m not convinced that a solution to these enormous challenges is immediately on the horizon”.

But he remained optimistic because there were still many great public servants in government, there was a rejuvenated civil society and the business community was now fully taking up its role in the democracy.

Gaspard declined to express his preferences for the ANC’s critical leadership elections in December. But he gave a hint when he said the plus-600 US companies invested in South Africa wanted to see decisions that would address the deep economic and social challenges the country faces.

The companies wanted to see the country’s transformation challenges addressed “in the context of real growth”, he said, adding that the two conversations about growth and about transformation “have been divorced from one another in South Africa for too long”.

One of the major disputes between the US and South Africa during Gaspard’s tenure was over US threats to curtail South Africa’s duty-free access into the US market through the African Growth and Opportunity Act (AGOA) if Pretoria didn’t lift trade restrictions on imports of US meat.

Though that was eventually resolved, Gaspard suggested South Africa should not be complacent, as there was still a very strong desire in the US to graduate South Africa out of AGOA, because it was so much stronger than other African economies.

“The issue of graduation should loom large for South Africa,” he said, noting that the country was already nearly halfway to a mid-term review of his position in AGOA which was due to expire in 2025.

“As we close in on that, it’s incumbent upon South Africa to make some real, meaningful progress on the issue of regional trade facilitation, diversification of exports, and leaning into a conversation on what a bilateral trade agreement looks like, that’s beyond AGOA.”

Gaspard said delays in effecting the Tripartite Free Trade Agreement (TFTA) merging the 26 countries of the southern and eastern half of Africa were having a negative impact on South Africa’s prospects.

TFTA was necessary to create a big enough market to overcome the challenges of joblessness inside of South Africa. “South Africa should be a booming service economy serving the rest of the continent and that’s just not where we are right now.”

It’s been over seven months since Gaspard left his post in Pretoria and there are still no signs of a replacement for him. Gaspard visited the embassy and found it to be working so well that he wondered if “maybe… my importance to the mission was over-stated”, he joked.

Even so, though, he added, US relations with the world were suffering because so many diplomatic posts were still vacant.

“When you look at the lack of an ambassador here and in other critical posts all around the world; when you look at the denigration of the contribution of our diplomats by this president, both through acts of commission and omission, one can’t help but be disheartened by it and concerned.

“There are flashpoints all over the world that need vigilance, our continued engagement and I dare say our leadership as well. And we seem to be withdrawing from our traditional partnerships in ways that I think will prove to be detrimental in the long term.

“There’s an attempt made to severely slash the US State Depatment budget, the USAID development budget,” and key heads of regions and assistant secretaries of state had also not been appointed. “That cannot be a good thing.”

The position of assistant secretary of state for Africa is one of those critical posts which remains unfilled.

Gaspard said that knowing the long process of vetting nominees, “it’s hard to imagine how Christmas will come with an ambassador gift-wrapped under the tree for the US and South Africa”.

Gaspard said so much of what he had done before had prepared him for his present role as vice president of the Open Society Foundations, especially “at this point of dislocation in the US and the planet” when freedom was under such threat.

The foundations, launched and run by the Hungarian-American billionaire currency trader and philanthropist George Soros, have given billions of dollars to organisations bolstering the media and political freedoms globally.

Soros, though, has been accused by both leftwingers and rightwingers here and elsewhere of pursuing regime change agendas by funding such pro-liberal democracy organisations. Soros gained fame by funding democrats struggling for freedom from the Soviet Union.

“Well, this is a paranoid political culture here, let’s be real,” Gaspard said. He reminded his critics though that outside of his home country, Hungary, South Africa was where Soros had made his first meaningful philanthropic partnership, a scholarship programme for oppressed South Africans, in 1979 “at the height of apartheid”.

Soros also helped fund some of the first negotiations between the business community and struggle activists to resolve the political crisis and after the ANC government came he had helped create a housing consortium that led to the creation of a quarter of a million homes for poor South Africans.

Soros also helped those in civil society fighting the Aids denialism under the Thabo Mbeki administration.

Globally, Soros had given over $14-billion of his own personal funds for human rights, democracy and equal access to justice. DM