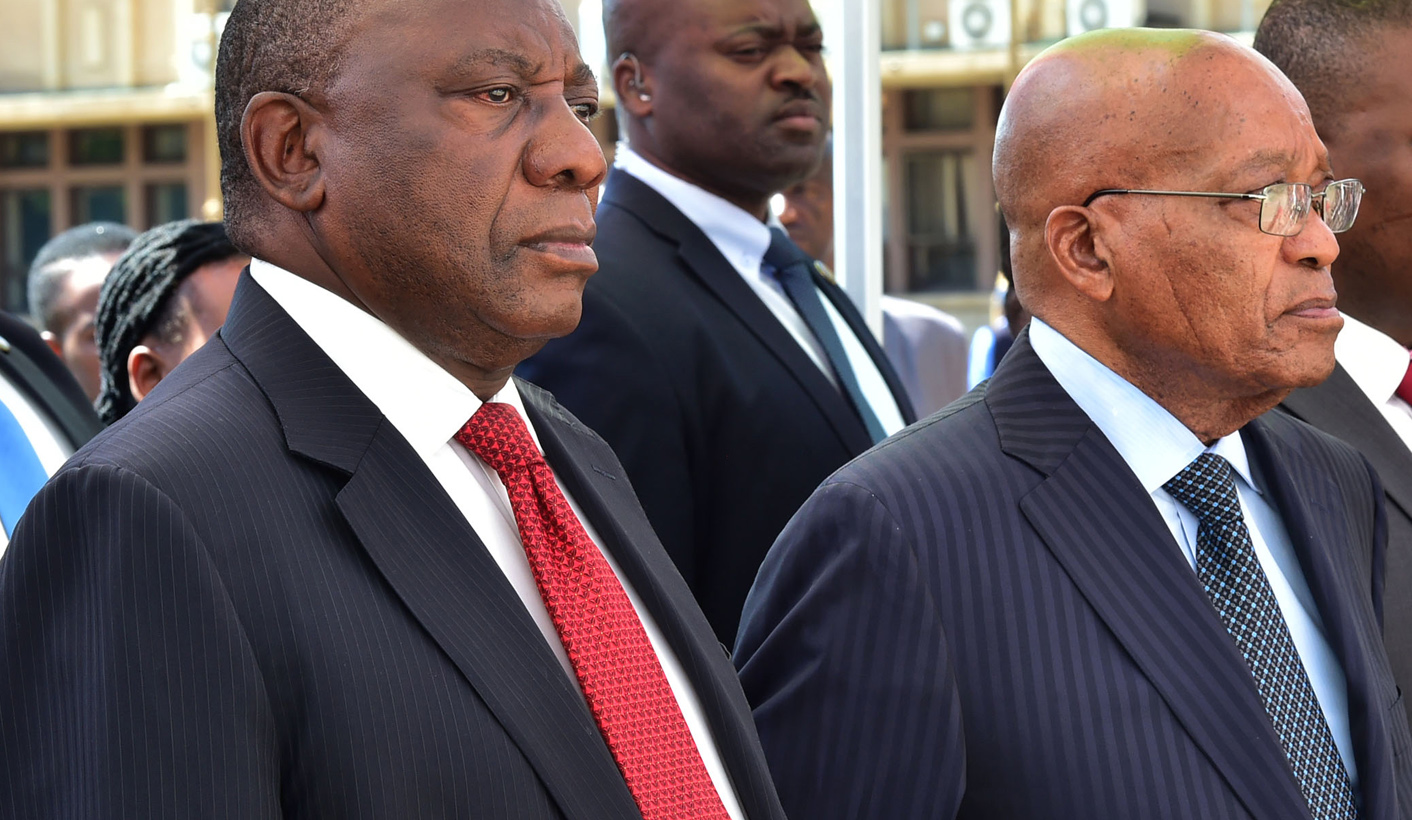 It’s smoke, mirrors and sex scandal time again as nominations for the ANC presidency got off to a false Spring Day start – and Deputy President Cyril Ramaphosa has learnt how tough it is to run a campaign based on ethics and morality when you have a few smallanyana skeletons of your own in the cupboard. By CARIEN DU PLESSIS.

There are many variables: There’s the court case that could see the ANC’s pro-Dlamini-Zuma leadership in KwaZulu-Natal dissolved, strengthening Ramaphosa’s hand. There’s the Eastern Cape elective conference at the end of the month, which could expose how much support Ramaphosa has in the second biggest ANC province. And then there’s the kingmaker, Mpumalanga Premier DD Mabuza, who is still behaving like one giant political tease.

The personal attacks appears to have been timed to coincide with what was supposed to have been the start of nominations on 1 September – although some weekend reports say this process has been put on hold until after the party’s national executive committee meeting a little later in the month.

The veracity of each and every report is hard to determine. Ramaphosa has owned up to the Sunday Times about at least one affair – with a doctor, which he said was ended eight years ago. This could have been to pre-empt and take the sting out of carefully written reports, mentioning no names, in the Sunday Independent about this affair and an alleged two others, for which the paper claims to have email evidence, although it’s unclear how they obtained them.

Sunday Independent went further, alleging Ramaphosa “blessed” the women with money, contrary to what he’s been saying about blessers. Ramaphosa denies it, but failed in his Saturday late-night attempt to block the publication of this article.

Ahead of the article, emails from the Sunday Independent editor, Steve Motale, who wrote the story himself, circulated on social media containing more explosive claims with the names of eight young women Ramaphosa was also supposed to have funded and had affairs with.

This story never made it to the paper, but it didn’t stop the anti-Ramaphosa campaigners from making social media graphics and running with it.

For allegations of politicians’ sexual lives to surface in the course of an ANC presidential race (or leadership contests anywhere else in the world, for that matter) is nothing new.

Last month – Women’s Month – Ramaphosa was accused of having beaten his former wife, who quickly came out to deny it.

Before that, Minister in the Presidency Jeff Radebe was caught with his pants down when he admitted sending requests for nude pictures to a government photographer. (Incidentally, Radebe and Ramaphosa share a brother-in-law, businessman Patrice Motsepe.)

President Jacob Zuma thus far holds the record for sexual scandals, because even though he is open about his polygamy, and to an extent also about his numerous extramarital sexual liaisons, some of the things he’s done even had his most die-hard supporters struggling to defend him.

There was his rape trial in 2005, which some to this day insist was a “honey trap” (he was acquitted, but it revealed deeply ignorant views about safe sex and gender equality), his admission in 2010 that he fathered a child outside of marriage with Sonono Khoza, daughter of soccer boss Irvin Khoza, and reports that a couple of women are still waiting for the husband-of-four to add them to his tally of wives.

Although many have said that another major sex scandal could finally sink Zuma, supporters must be sure that this won’t happen. It’s also likely that they’re confident that Dlamini-Zuma isn’t hiding any salacious secrets in her cupboards. A woman is likely to be more harshly judged than a man for this.

Why, then, the weekend’s Ramaphosa leaks?

For one, it seems to be payback for the #GuptaLeaks, which has done great damage to Zuma so far – and by extension Dlamini-Zuma’s campaign.

Two, it was meant to knock Ramaphosa off course, as his main campaign tenet so far has been morality and ethics, a counterweight to Zuma’s corruption.

Ramaphosa said in a statement meant to counter especially the social media campaign that it was about discrediting him. He used the opportunity to portray himself as a moral crusader under attack.

“This latest episode extends far beyond an attempt at political smear. It represents an escalation of a dirty war against those who are working to restore the values, principles and integrity of the African National Congress and society,” he said.

Three, it’s psychologically exhausting because there are hints that more, and possibly bigger, personal skeletons will be shaken out of the cupboards. These could cause Ramaphosa some anxiety (should he be the anxious type), and also those around him that he loves, who are supposed to form the basis of his support system.

Four, the mixture of truth and disinformation makes it hard to know what to believe from either side.

Ramaphosa in his weekend statement said the “smear campaign” against him resembled the “stratkom” techniques being used by the apartheid government (he omitted also mentioning here the Browse Mole report, circa 2007).

This kind of campaign kicks up so much dust that it becomes very hard to fight back with facts.

Five, while some of these allegations might not be too damaging to him within the ANC, where sexual indiscretions have so far been easily forgiven (ANC Women’s League supporters in Gauteng on Sunday enthusiastically sang “We are ready for Ramaphosa” despite the revelations; and even Economic Freedom Fighter Julius Malema, who has thus far criticised Ramaphosa for the shooting of mineworkers at Marikana, defended him), it might damage his standing somewhat in the view of more conservative white communities and his supporters in the West. He has been rallying hard to get support from opposition voters and community organisations (including churches) outside the ANC in an attempt to dislodge Zuma, and this could dampen their spirits somewhat.

And six, it reveals the lay of the land just as branches have to start thinking about making their nominations. Already the ANC in the Northern Cape has come to Ramaphosa’s defence, while one of the women mentioned on the social media campaign denied having an affair with Ramaphosa but pledged loyalty from her branch.

Ramaphosa has said he would “not be diverted from doing what’s right for our country and our people”, but he might do well to be completely honest about what’s alleged to have been written in those emails, if he wants to remain the moral campaigner. DM