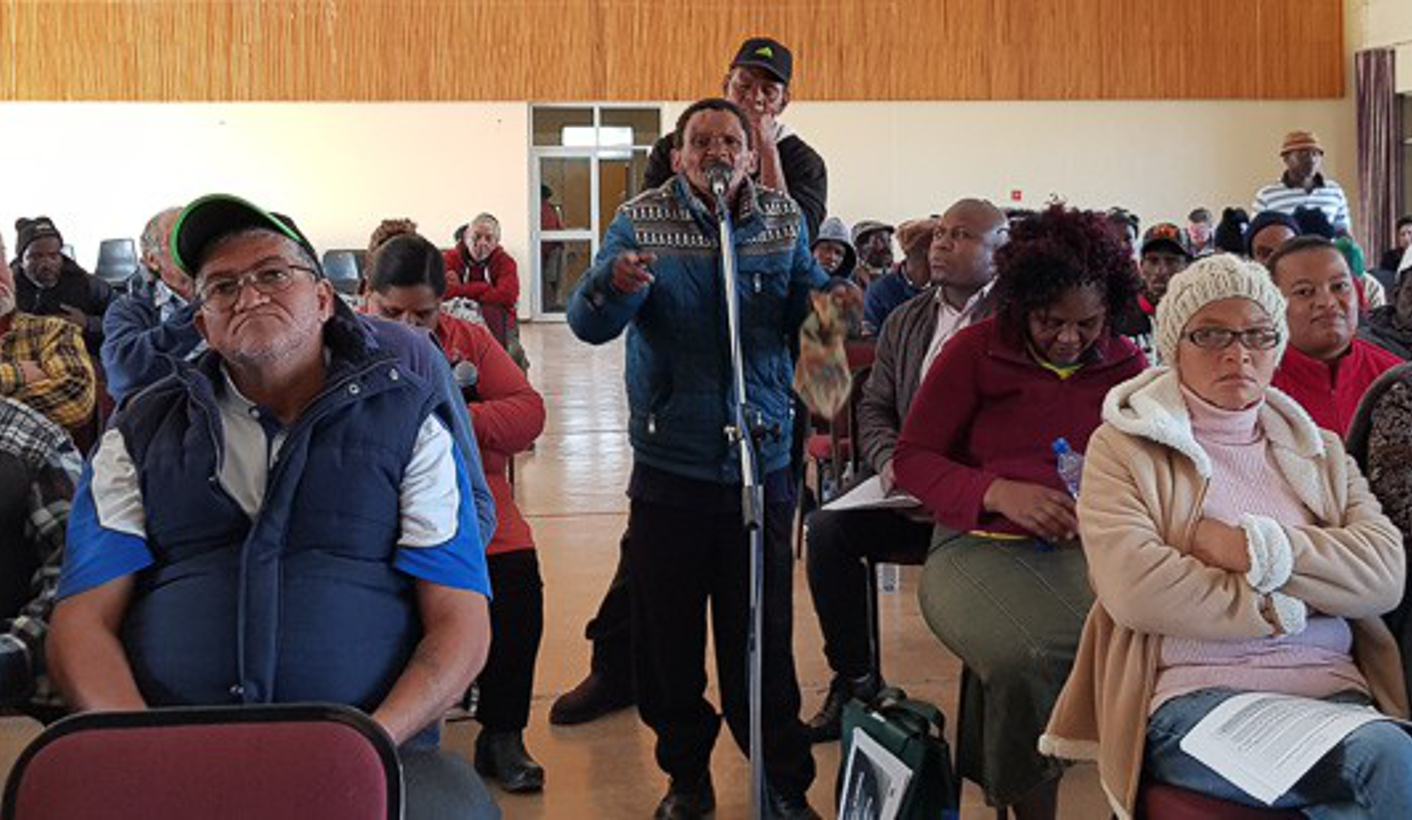 “Where are we going to fish?” MPs were asked during a public hearing. By Alicestine October for GROUNDUP.

It was anything but smooth sailing for the Marine Spatial Planning Bill on Wednesday when members of Parliament came to consult the fishing community of Saldanha.

Members of Parliament’s portfolio committee on environmental affairs came to consult coastal communities along the West Coast on the bill. The bill is intended to give effect to government’s Operation Phakisa and in particular the focus on the economic potential of the seas. The public participation process is scheduled to conclude in Parliament on Friday.

The bill, Department of Environmental Affairs director Gcobani Popose told community members, would enable an integrated system to guide the development, implementation and monitoring of Marine Spatial Management Plans in the country. This would be better than the “silo” approach and would reduce conflict over the use of resources, and help to ensure these resources are used sustainably and for development.

In his State of the Nation address in 2014 President Jacob Zuma said of Operation Phakisa that South Africa’s oceans had the potential to contribute up to R177-billion to the economy by 2033 compared to R54-billion in 2010. But Saldanha community members, mostly small-scale fishermen, wanted to know who would benefit from unlocking economic opportunities.

A fisherman from St Helena Bay, Gerald Cloete, appealed to lawmakers to take into account small-scale fishers’ contribution to the formal economy. He said Operation Phakisa was aimed at utilising the economic potential of the ocean. But, he said: “Should we not start by first giving proper recognition to these fishermen and their contribution to the existing economy?”

Popose stressed that the bill would not replace existing legislation in departments such as Agriculture, Forestry and Fisheries (DAFF), Mineral resources and Environmental Affairs (as steering department) but would allow for better co-ordination of planning. This means policies like the controversial fishing quotas and other regulations which are causing an outcry from fishing communities will mainly remain intact – something that Cloete sees as a concern.

“We are sitting with a department (DAFF) causing more trouble for our communities than providing solutions,”said Cloete. He referred to the Marine Protected Areas that limit traditional small-scale fishing.

“So I’m asking you, let us start at the beginning and first recognise small-scale fishing. There is just no protection from DAFF and government should at least give us some kind of 20% or 30% usage of the Marine Protected Areas.”

Another local fisherman, Christo Koopman, was much more emotional in his plea to lawmakers. “Wamee is die regering nou wee deu’meka” (What is government up to now?). He pointed through the window to the bay, claiming the community was already feeling the impact of government’s Industrial Development Zone which he said had undermined the whole fishing industry in Saldanha.

The Saldanha Bay IDZ, according to its website, is designed to be “a world-class, internationally recognised and respected South African marine engineering hub focused on the international oil and gas sector” which offers surrounding communities an opportunity to “transform their own landscapes of possibility”. But Cloete said what he saw was “gas pipes, and the sea, the traditional fishermen’s primary source of income, turned into an industrial site”.

“We are robbed of our daily bread whilst the IDZ only seems to benefit some people,” Cloete told MPs.

“You come here with a presentation telling us that one economy is more important than the other. So what you mean is that if our government decides that the gas and the oil economy is more important than the fishing economy — and we are already seeing this happening outside here — that the fishing economy will cease to exist. That is what this bill is telling me.”

“Just look at the drilling here in the bay for gas and oil by the likes of BHP Billiton. Where is that company based? Does this bill seek to enhance the economic opportunities for SA citizens or is it to benefit multinational companies like BHP, or Arcelor Mittal, the Guptas and them?” Adams asked to approval from fellow fishermen.

He then took a swipe at the public participation process. “The Constitution demands that you consult with the public and now that you have, will it actually be taken into consideration? I don’t think so because we have made hundreds of submissions before Parliament,” Adams said waving papers in the air.

“We have written hundreds of thousands of words of public comments and nowhere do we see any movement happening for the betterment of the lives of small scale-fishers.”

Adams told MPs small-scale fishing communities had been fighting for a small-scale fisheries policy since 2007. He said Operation Phakisa would create 22 more Marine Protected Areas. “So where are we going to fish? You come, you consult, you tick your box, you leave and it doesn’t matter because we don’t see you again. Yet the decisions you make have a huge impact,” said Adams.

Some of the community members present urged government not to take Phakisa (which in Sesotho means Hurry Up) so literally.

DA Councillor Andre Kruger reminded MPs that good balanced decisions usually took time. “I support the use of the ocean economy to create jobs, but if we hurry we get the situation we have now. Let us make balanced decisions that are best for the economy, the environment and society,” he urged. DM

Produced for GroundUp by Notes From the House