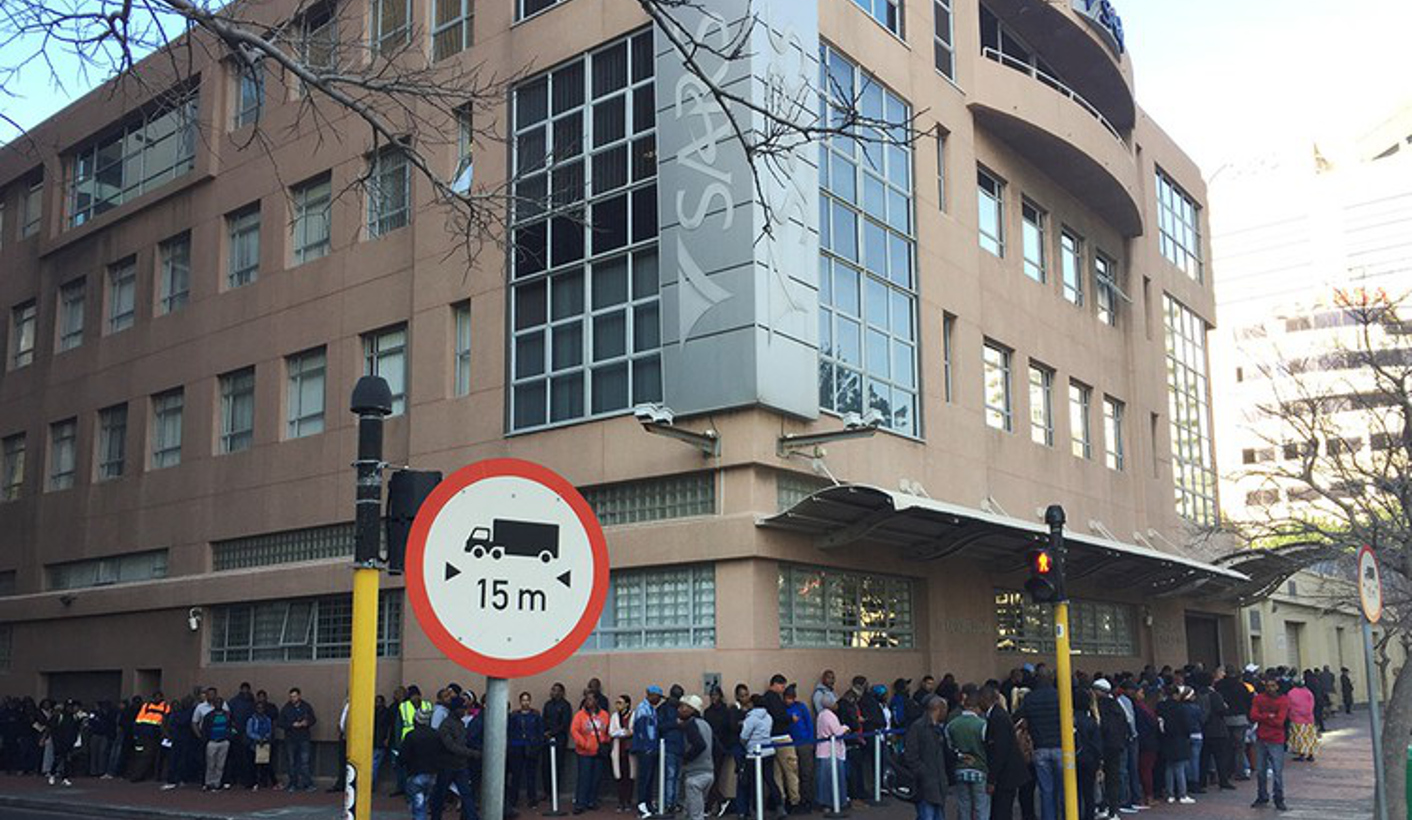 A reporter’s frustrating day dealing with Sars. By Ashraf Hendricks for GROUNDUP.

It’s 9.30am on a Friday morning and  there is a queue of over 200 people  outside the Sars  office in the Cape Town city centre. The queue snakes around the corner, even though the doors to Sars opened at 8am.

Noor Overmeyer left his home in Lavender Hill after 6am. He has taken a day off work and has been in line since 8am. The whole process “takes about five hours” he says. Asked why he doesn’t do his tax online, Overmeyer says he doesn’t know how.

Austin Ramsay from Richwood has been in line since 8.30am. It’s now almost 10am and he’s three people away from the entrance to the Sars building. But Ramsay isn’t bothered by the queue:  “It has to be done.” Once inside, it could could take between 30 to 45 minutes to submit a tax return, he says. Ramsay prefers not to submit his tax return online. “If you mess up online, you’re screwed,” he explains.

In 2014 GroundUp reported the same problem. A Sars spokesperson at the time said that opening an office in Mitchells Plain would reduce the waiting time. That office has since opened.

This week Sandile Memela, spokesperson for Sars, told GroundUp  that tax season is the busiest time and  “additional and temporary staff, overtime and a real-time branch monitoring mechanism” have been put into place. Staff arrive from as early as 6am and “remain until 8pm to assist taxpayers who are still in the queue.” There are also mobile tax units to help people in remote areas, he says. “On average, a taxpayer can wait for an hour, with the shortest waiting time being three minutes and the longest time being two to three hours.”

Visitors to Sars branches in the Western Cape. Table supplied by Sars

Kurt Ehrenreich from Pelican Park doesn’t mind the queueing. He says it gives him an opportunity to catch up with old friends. He has been standing for 30 minutes. A little tired, Ehrenreich sits on the side of the pavement waiting for the queue to move slowly forward. There are more than  50 people ahead of him. He’ll likely be waiting at least another hour. Ehrenreich is a freelance contractor and does his tax returns twice a year. After years of doing this, he says the queues are the same. Asked about doing it online, he says that he’s not familiar with the technology.

But Stephen Waks, a pensioner from Table View who has been standing in line for an hour, says  the queues have improved. “They give you stickers and they send you to other lines quickly,” he says. “They’re much better than other departments.” Online e-filing, he says, is too complicated and there are too many passwords.

My day at Sars

Last week, I had to stand in the Sars queue.

After being unable to retrieve my password for e-filing, I was told my account was locked and that I needed to go to an office to get it fixed. My intention was to complete my tax return and reactivate my e-filing account. I was warned about the long queues at Sars, but still hoped for a quick trip. That hope was to be crushed.

Parking in town is expensive so I leave my car just opposite the CPUT campus. The walk to the Sars office is about 3km. I arrive  at about 10.30am. The queue makes its way around the block with about 140 people in front of me. Depending on what you need  to get done, you are given a page with a coloured sticker that indicates which queue  to stand in. By far the longest queue is the tax returns one.

A woman complains about needing to sit while  another says she is thirsty. Another Sars customer stoically and quietly reads a book. Preference is given to disabled people and pensioners.

It takes almost three hours to reach the front. Once inside we are given a numbered ticket and told to take the lift up. Here we are seated and told once again to wait. I notice that only 11 of the 19 desks are occupied by staff. It’s about 1.30pm, so perhaps some of them are on a lunch break.

Time drags on at a snail’s pace as a monotone electronic voice reads out the ticket numbers. The only relief offered from boredom is a computer screen showing the numbers. There’s no water cooler or vending machine in sight. And a bathroom break requires you to take the lift to the ground floor.

My number comes up. It’s now 2.15pm. Sorting out my tax return takes about seven minutes and I’m out of there. I am told that getting my e-filing account activated requires help from someone in a different part of the building. I would need to stand in line again. It’s not worth it. I leave. DM