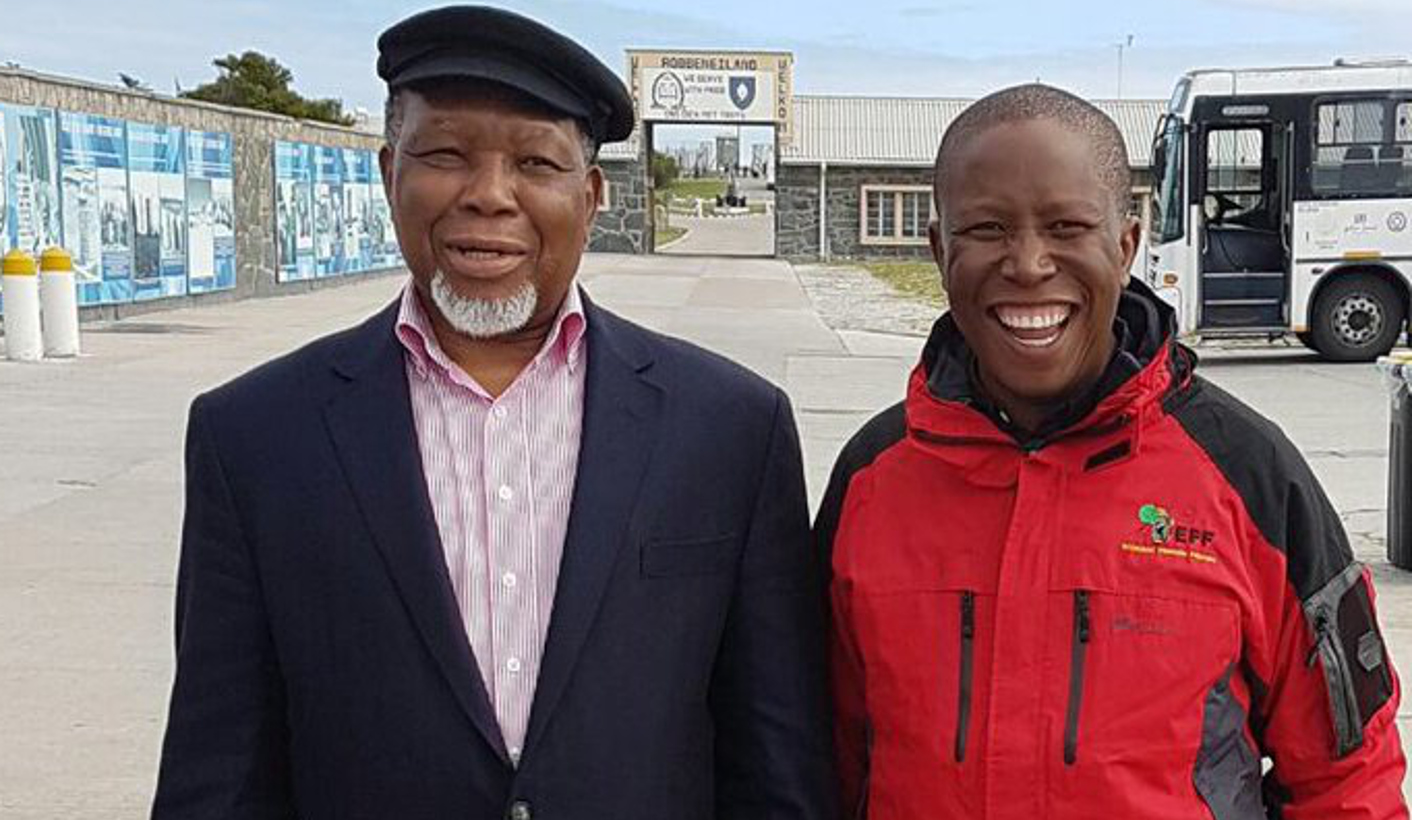 One of Struggle legend Ahmed Kathrada’s final wishes was to take the DA’s Mmusi Maimane and the EFF’s Julius Malema on a guided tour of Robben Island. Kathrada died before that plan came to fruition, but on Wednesday, his widow and his foundation saw his desire partially fulfilled. The EFF’s leadership joined ANC stalwarts including Barbara Hogan and Kgalema Motlanthe in an unusual expedition to the former apartheid prison that sent one clear message: South Africa’s liberation history does not belong to one particular political party. By REBECCA DAVIS.

During his later life, Ahmed Kathrada led more than 300 tours of visitors to Robben Island: testament to his strong desire that the apartheid prison be kept alive in memory as a monument to “the triumph of the human spirit against adversity”, as he put it.

Kathrada did not live long enough to lead one particular expedition, however. Before his death, he expressed a wish to return to the island where he was incarcerated, this time with the leaders of the Democratic Alliance and the Economic Freedom Fighters.

“[Kathrada] primarily saw in the leadership of these two organisations the hope and future for this country, in the sense that they were young, they were dynamic, and provoking change in this country,” executive director of the Ahmed Kathrada Foundation Neeshan Balton told journalists in Cape Town on Wednesday.

Balton was speaking after completing a tour of Robben Island with the leadership of the EFF. The Fighters had made their island pilgrimage in the company of Kathrada’s widow Barbara Hogan, former South African President Kgalema Motlanthe, South African Communist Party veteran Laloo Chiba, and a number of other former Robben Island inmates.

For Motlanthe, it was a difficult trip.

“I’ve always suffered from a psychological barrier of visiting prisons because when I was let out of Robben Island, I went into caucus with myself and the two of us agreed we will never, ever go back to the place,” Motlanthe explained. He said that the presence of Hogan, Chiba and other former comrades had made the journey easier.

The visit was emotional for Hogan for a different reason. It was her first return to Robben Island since her husband’s death.

“So much of Robben Island reminds me of Kathy’s spirit, and his passion to talk about so many things – the things in life that really matter and the issues that affect you when you are really facing tough times,” Hogan said. She added that she thought Kathrada would have found the experience “very special”, and paid tribute to the EFF leadership’s approach to the visit.

“The EFF people listened and were so respectful in so many ways,” Hogan said. “It was just a real communication.” Turning to EFF leader Julius Malema, she said: “I just loved being in your company, and I want to thank you for taking the time.”

From Malema’s side, there were equal expressions of respect. “Our role was nothing else but to listen,” he said.

When Kathrada suggested the EFF go to Robben Island, Malema said he interpreted the gesture as meaning: “You need to know what we went through so you don’t mess up what we fought for.”

The EFF Commander-in-Chief said that it was vital to honour the 1960s generation who led the Struggle, because “most of these people are neglected, are rejected, some are even forgotten”. A country without elders is doomed to fail, Malema said, “because then we don’t know where we come from”.

One of these elders – Motlanthe – had a particular view on what message he hoped the EFF had extracted from the visit.

“I think having been exposed to the harsh concrete reality of what Robben Island really meant, you will also take with you the understanding that the best way of avoiding the situation where our people could end up behind bars for their ideas […] is to remain eternally vigilant. The price of freedom is eternal vigilance, and I hope that’s the lesson that you take with you from this visit.”

It’s a sign of the times that it is now possible to witness a former deputy president of the ANC publicly urging an opposition party to maintain a watchdog role in a democracy governed by his political party.

Writing in Daily Maverick in March this year, Ranjeni Munusamy suggested that Kathrada’s gesture of taking opposition leaders on such a tour would be “unusual and controversial” given the ANC’s claim to Robben Island’s history.

“Kathrada’s desire to take the opposition leaders to the island could be an indication that he believes history should be shared across party lines or that they need to be empowered with historical perspective. It could also mean that he recognises that the future of South Africa might not be the ANC’s preserve,” Munusamy wrote.

In Balton’s view, inviting the EFF leadership to Robben Island signified one thing most strongly: “Liberation history doesn’t belong to just one party”. Malema expressed a similar opinion: “[Robben Island veterans] were not fighting for the ANC, they were fighting for South Africa,” he said.

But would the ANC’s current leadership feel the same way? Hogan and Motlanthe were asked whether they were anxious about how their willingness to serve as tour guides to the EFF might be read by the ANC. Both dismissed the idea, with Motlanthe saying he had “no fear whatsoever”.

Hogan added: “We live in a society where the greatness of it is that people have their ideas, and nobody should be persecuted for trying to improve the lot of South Africa.”

One question hung in the air: Where was the DA? After all, Kathrada’s wish was to take not just Julius Malema to the island, but also Mmusi Maimane. In response to a query from Daily Maverick, Balton said that the Ahmed Kathrada Foundation had “made the request” to the DA to undertake the visit, but had not yet been able to set a date.

Maimane indicated to Daily Maverick subsequently that he was very keen to make the trip to Robben Island, and hoped to be able to do so shortly. The DA may come to regret not having joined the EFF’s trip on Wednesday, however. The optics of liberation heroes sharing their wisdom not with youngsters of the ANC but youngsters of the EFF were undeniably powerful, and will lose some significance the second time around.

Though the EFF leadership demonstrated nothing but warmth and respect for the former ANC leaders in attendance, it was a different story when the topic changed to the current ANC leadership.

Asked what the EFF’s plan will be when President Jacob Zuma faces questions in Parliament on Thursday, Malema said the Fighters intended to “put him in his place”.

As was the case in Parliament recently, Malema insisted on referring to President Zuma as “Duduzane’s father”, on the grounds that the president had ceased to be “the father of the nation” when he started focusing on “turning his family into multibillionaires”.

If Malema’s words are anything to go by, expect the EFF to approach Thursday’s Parliamentary session with additional fire in their bellies after their Robben Island trip.