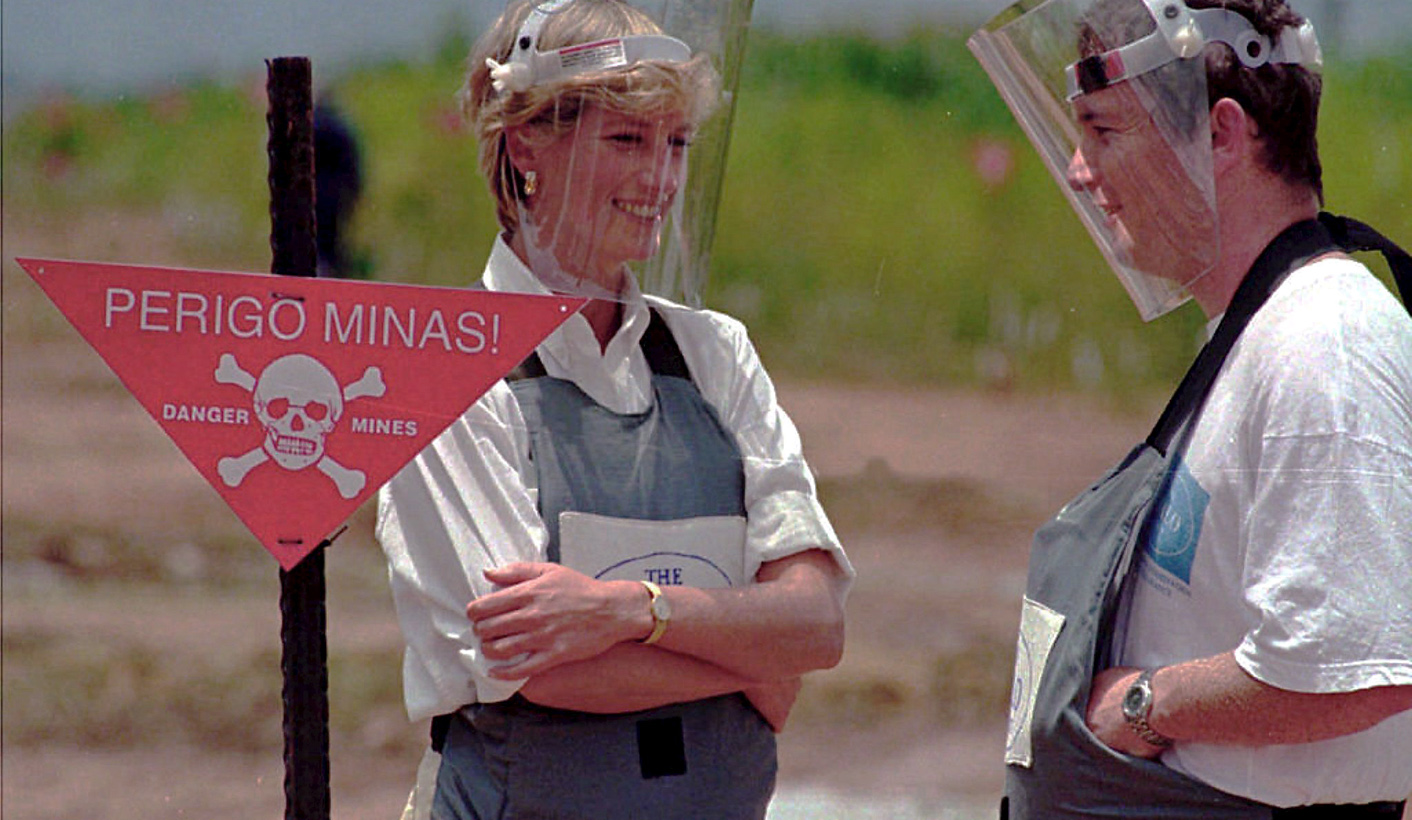 It was a muggy Sunday morning in Luanda on 31 August 1997. I was in my hotel room, washing my undies, waiting for the CNN crew I was working with to watch yesterday’s rushes from the diamond killing fields in the Lundas. I turned on the TV. On BBC, an artist sobbed about a fab woman who had just died. More teary-eyed mourners followed. But for five minutes the BBC didn’t say her name; who could it be? I washed and wondered.

Until CNN producer Bob Coen knocked on my door: “Princess Diana has died and CNN wants Peter Arnett to go help the European crews!” Oh no. I spent a month putting together this trip for Arnett. On Monday the crew was to fly for the day to an oil platform in Cabinda. Bad timing for a royal death.

Arnett counter-proposed that he stay in Angola and do a tear-jerker retracing Diana’s visit to the country in January. I was the linchpin. I worked with the International Campaign to Ban Landmines in Southern Africa. After campaigning in Zimbabwe and Mozambique, I had gone to Angola to help the local Campaign with media during Diana’s visit. I knew her itinerary.

That muggy Sunday, I worked the phone. On Tuesday we flew to Huambo in Angola’s central highlands, where Diana had visited the International Red Cross orthopedic centre. My mission: find amputees who remembered her. That was next to mission impossible because they had no idea who she was. Princess Diana? Blank faces. I changed tactics. A pretty blonde woman with lots of photographers? Signs of recognition. Who was she? The head of Unicef said one helpfully? The president of the UN, asked another?

In the 1990s Angola kept erupting into civil war. Huambo had been on-and-off under siege since 1992. No telecoms, no Hello! magazine, just plenty of hunger, bombs and landmines. On my 15-something interview with amputees I hit the jackpot: the daughter of a hairdresser remembered reading Portuguese celeb mags in her mom’s long-destroyed salon and identified Diana as a princess, although not her country. The world’s most famous woman had gone to the only place where people don’t know her.

We set up an interview. I translated off camera. How was the visit? asked Arnett. Nice, said the hairdresser’s daughter and stopped there. Cut! Coaching. Camera rolls again. We got a one-sentence sound bite and a nice smile. Success.

The Halo Trust demining manager was not surprised. “A few days before Diana arrived a planeload of Scotland Yard and Angolan security officers were all over Huambo asking us if they needed sniffer dogs,” he said. “We laughed and said she could walk alone without being mobbed because people don’t know who she is.” Spot on.

A Red Cross technician making prosthetic legs for the hundreds of amputees flocking to Huambo during the 1997 eruption of peace was not overwhelmed either. “That took too much of our time, I couldn’t wait for the circus to leave,” he said. More coaching needed.

We drove to Kuito to shoot the minefield that Diana had walked through, supplying a mega-iconic image. Arnett’s voice quivered expertly: “I am standing where she stood…” I half expected him to have a pope moment, fall on his knees and kiss the hallowed ground.

As I translated off camera, I wore the protective vest that Diana had worn – the smallest vest on site that day.

As the Princess was 25cm taller than me, on her the vest protector reached nicely mid-thigh, showing off her slim, long legs sheathed in light khaki. On my frame, it hung to my knees – as clunky and ungraceful as if I were wearing a hazmat suit. No pics, I told camera operator Amy Merz. Then I thought – when will I ever wear something worn by a princess? Snap away, please!

Back in Luanda, the UN presented Diana with a souvenir – a deactivated landmine. TV news across the world showed Diana holding a round landmine in her hand, like a doughnut. I was horrified. This image was undermining the protection messages for children: Never Touch a Landmine or Unknown Object! I wrote a furious letter to the UN and eventually some press officer acknowledged it was not the best gift. Photo: Diana, Princess of Wales, is shown a selection of land mines at the Mine Training Centre, in Viana, near Luanda 14 January 1997, as part of her four-day visit to Angola in support of the Red Cross campaign to ban anti-personnel landmines. (EPA)

The night before Diana visited a hospital in Luanda, we worked like mad at the office of Médécins sans Frontières painting banners. It rained at midnight and the banners were still wet by mid-morning but we wrapped them parcel-style around the MSF 4x4s and reached the hospital gate in time for Diana’s arrival – paint-splattered, both people and cars. Some of us were allowed in the hospital and I snapped a pic of her, looking lovely as usual.

The pride of the Angolan landmine survivors in wheelchairs and crutches holding banners still gives me goose bumps 20 years later. We had made our point. The Angolan Campaign to Ban Landmines was homegrown, not princess-led.

Across the world, the Campaign was propelled by tens of thousands of anonymous activists. It was a painstakingly slow building of improbable coalitions of doctors, soldiers, amputees, politicians, deminers, peasants, churches, NGOs and more. Princess Diana was the icing for a cake that we had been baking for a long time. DM

Main photo: Princess Diana, wearing a heavy duty protection vest and face shield, is accompanied by a mine clearing expert of the Halo Trust during her visit to the minefields in the high plateaux near Huambo, to watch mine-clearing operations in an area once on the frontline of the country’s civil war, 15 January 1997. (EPA)

Mercedes Sayagues is a journalist and media consultant who travels throughout Africa looking at things unfair, weird or fun – like human rights, gender and sex.