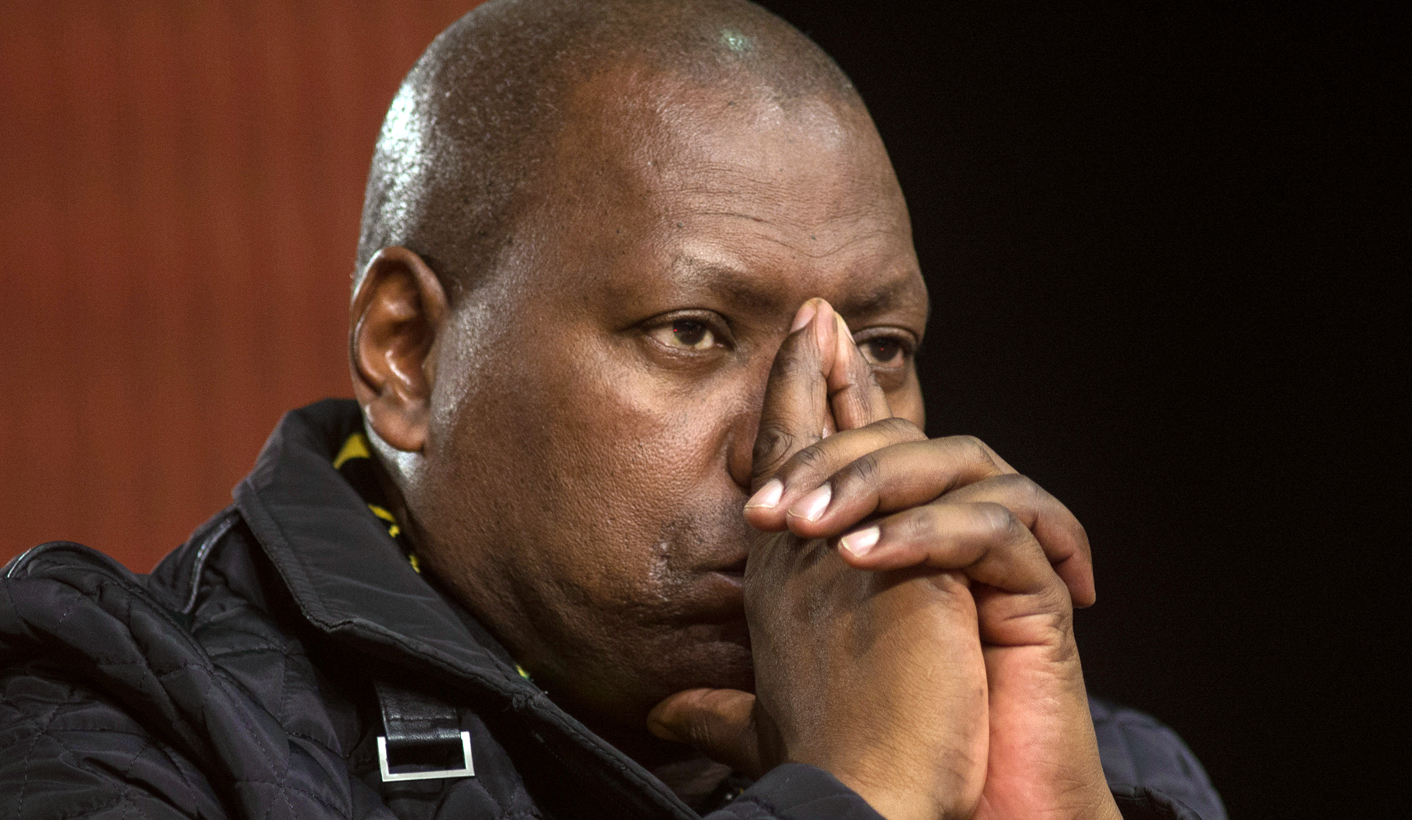 ANC Treasurer General Dr Zweli Mkhize has given senior officials from the Central Energy Fund 48 hours to explain why his name was dropped into discussions over an alleged plot to swing a R4.6-billion PetroSA deal. By JESSICA BEZUIDENHOUT.

Zweli Mkhize seems set on clearing his name following claims that he was involved in a high-level political tussle over the deal involving a Nigerian company and another, owned by the Russian government.

The allegations surfaced in an affidavit by William Steenkamp who claimed that his removal – and that of Owen Tobias – from the PetroSA board was, in part, linked to the R4.6-billion ($359-million) project through which PetroSA seeks an equity partner to boost gas exploration at Block 9 off the Cape south coast.

The two have brought an urgent application to challenge their removal by the Central Energy Fund (CEF) board and the case was scheduled to be heard at the High Court in Cape Town today. The CEF is opposing the matter and has vehemently denied the allegations.

Steenkamp, in his affidavit, claimed he was confronted by Anda Bici adviser to CEF chairman, Luvo Makasi – outside a meeting of the energy portfolio committee meeting in parliament in June – when Bici allegedly asked him: “How do you expect me to assist you with your CEF challenges when I am told by one of my contacts that you and Owen had deliberately in a PetroSA board meeting successfully convinced the board not to support a company favoured by the President, and instead opted for a Nigerian company linked to the ANC Treasurer General to partner with PetroSA around Block 9.”

Mkhize immediately rejected any knowledge or involvement in the deal when details surfaced last week. In response to questions, Mkhize told Daily Maverick he had no idea why the CEF officials will have brought up his name in reference to the deal.

He said he did not know the CEF individuals named personally and neither is he familiar with the Nigerian company vying for the deal.

And, he has now taken this a step further by addressing a strongly worded letter to the CF-linked individuals at the centre of the allegations.

Daily Maverick has seen a copy of Mkhize’s letter in which he says the allegations suggesting he and President Jacob Zuma had had a hidden hand in the deal exacerbates a perception that the ANC runs a “corrupt government” and that officials are involved in “dirty deals”.

It is a stern warning for the CEF officials to respond to the allegations contained in Steenkamp’s affidavit by no later than tomorrow, Thursday, 31 August.

It is directed to CEF chairman Luvo Makasi and his adviser, Anda Bici who was named in Steenkamp’s affidavit as one of those individuals who had accused Steenkamp of allegedly trying to block a deal with the Russian company that supposedly had the backing of President Zuma.

“The statements that Mr Steenkamp alleges that you (Bici) confronted him about are very serious and damaging to myself and the President as leaders of the ANC, more so for the President as the leader of the country,” wrote Mkhize.

“Where did these allegations come from? Who else did you discuss my alleged links to a Nigerian company with? Please state their names, the content of the discussion and provide me with their contact details.”

Steenkamp spilled the beans on how PetroSA was under pressure to sign a preliminary Framework Agreement with the Russian company late last year.

In addition to Bici, Steenkamp had named Khotatso Molaba, a former National Intelligence Agency staffer who joined PetroSA in 2013 and who is currently seconded to the office of the CEF CEO.

Steenkamp detailed how on 18 November last year just as the 14th Inter-Governmental Committee on Trade and Economic Cooperation (ITEC) gathering between South Africa and Russia was taking place in Pretoria, PetroSA was confronted with a Framework Agreement setting out the terms and conditions for negotiations with the Russian State Geological Company (Rosgeo).

He and his team, having obtained legal advice from PetroSA’s own legal department, revised the document to eliminate several “binding” provisions pending the outcome of negotiations with Rosgeo.

“The board otherwise had no difficulty committing to a memorandum of understanding with Rosgeo,” Steenkamp stated in his affidavit.

He describes how PetroSA’s Neil Robertson and Molaba who were attending the Pretoria event had dialed into a PetroSA board meeting on the same day.

“…Molaba anxiously enquired as to the Rosgeo agreement as they wanted to sign the agreement as part of the ITEC session in Pretoria.

“We conveyed to them that the board could not sign the agreement given that a decision had not yet been made on a successful bidder,” said Steenkamp.

When they refused to do this without the PetroSA board approval, they were then accused of deliberately blocking the deal, Steenkamp claimed.

A version of the framework agreement between PetroSA and Rosgeo can be viewed here.

Relations between the PetroSA board – already tense following disagreements over the direction of PetroSA and a turn-around strategy – then deteriorated further.

Several board members resigned and by March the CEF board issued letters to the remaining board members warning of its intention to replace them. Steenkamp and Tobias stayed put but where removed on 5 July when an interim board was appointed.

The CEF’s response to the court application is covered in a lengthy affidavit filed by its chairman, Makasi who denied the allegations and argues that the CEF board was well within its right as shareholder of PetroSA to to effect the board changes.

Makasi said that Bici took exception to the claims that he was somehow involved in the “bald allegation” of “capturing PetroSA”.

Makasi said there had been an “irretrievable breakdown” between the directors of the CEF and PetroSA boards and that even if the removal of Steenkamp and Tobias was found to have been flawed in terms of process, it would be inappropriate to reinstate them, either temporarily or permanently.

“The applicants have accused the CEF of very serious misconduct, corruption and of mischievous political machinations. A productive relationship, is at this stage, simply impossible.”

But Makasi’s response to the circumstances around which the ANC Treasurer General and Zuma were introduced in discussions relating to the Block 9 deal did not appear to satisfy Mkhize, whose lawyers had gone through the document with a fine-tooth comb.

Wrote Mkhize: “What is of interest in this affidavit you have elected not to deal with the allegations that refer to the president and the TG of the ANC and our alleged meddling with state owned entities’ procurement processes.”

Mkhize said that he had had his legal representatives study the court papers and that the allegations were “unfounded” and unless clarified by those allegedly responsible for them, would defame him.

The Nigerian company is not named in the court papers, but Daily Maverick has established that a South African company called Solihulltz Energy submitted a pitch for Block 9 during the bidding process ran by auditing firm EY in London. The company, which does have a Nigerian shareholder, declined to comment when contacted for comment.

Apart from the financial benefits for PetroSA, the Block 9 deal was also designed to augment depleting feed stock for the Mossgas gas to liquid refinery to extend the lifespan of the facility.

All indications are that Rosgeo is a front runner with various MOI’s and framework agreements already having been drawn up while final negotiations are still under way.

While the deal has been in the making for several years, the court battle does suggest a sudden sense of urgency to conclude the transaction. DM