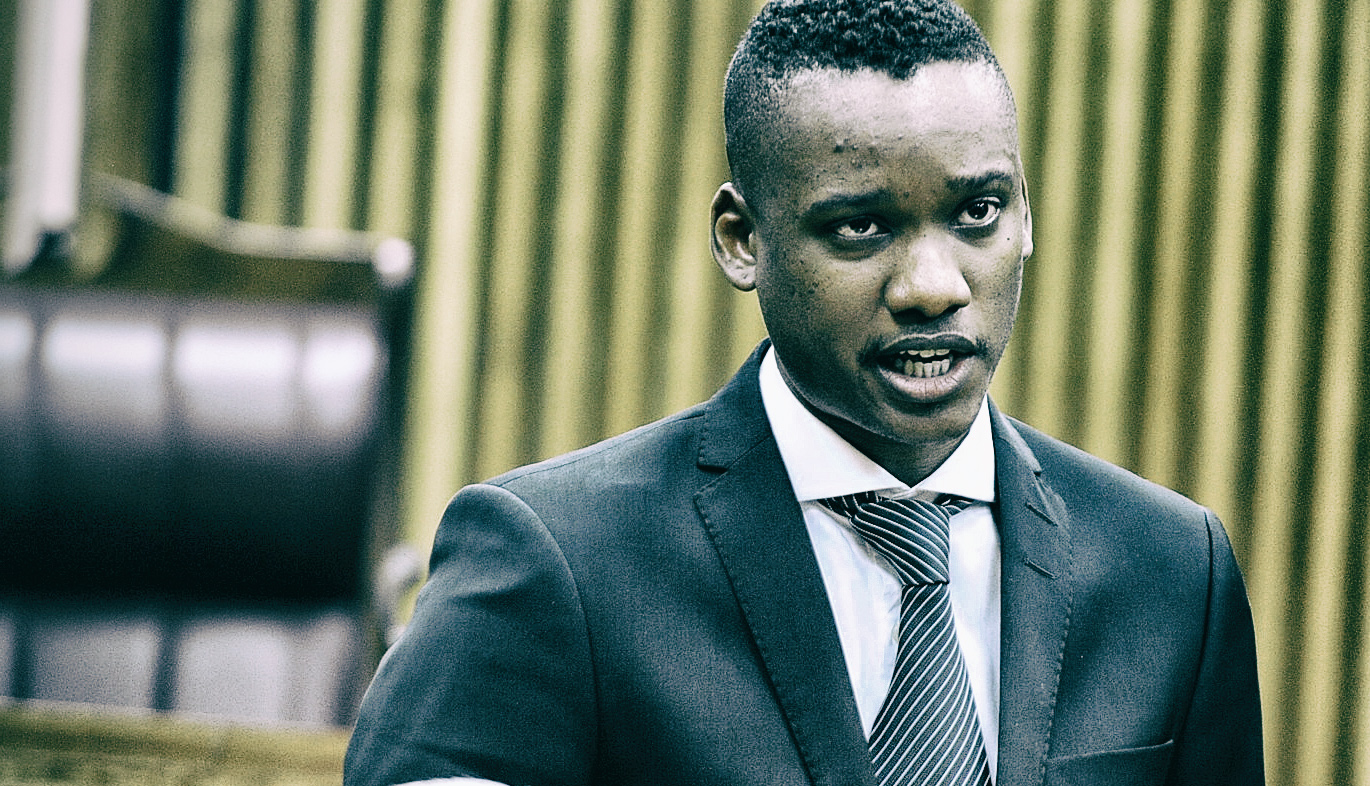 The asshole gene has apparently not skipped a generation. By RICHARD POPLAK.

Duduzane Zuma is not his own man.

Come to think of it, there is an argument to be made that he’s actually a replicant generated in a secret underground facility, packaged in a hypo-allergenic, stainless steel pod, and handed over to the Gupta family during a formal state capture ceremony.

That said, and leaving aside his actual provenance for the moment, Duduzane Zuma is undeniably useful. But he’s by all accounts a total pain in the tochis to maintain. A quick perusal of the Gupta Leaks reveals how much work goes into keeping the Zuma bot in the manner to which he very quickly became accustomed.

Emails from [email protected] flooded through Gupta lieutenant Ashu Chawla’s inbox, covering everything from an alleged sex scandal to a R75 overcharge at KwaZulu-Natal’s fancy Zimbali resort. (Anyone associated with the Guptas, whether they were purchasing a coal mine or a martini, knew to quibble for every last cent.) He is shuttled across the planet first class, and man does the kid churn through luxury vehicles. He once crashed a Porsche into a taxi, killing a woman named Phumzile Dube, while another woman was injured in the crash. Although an inquest found him guilty of negligence, the National Prosecuting Authority was busy with other matters. But it’s worth keeping in mind that he has not not been found guilty of killing someone with a car.

Dudu’s housing, water and electricity bills are paid for him; his food is likely pre-chewed; it’s unclear if he’s ever visited a bathroom without being accompanied by a ceremonial butt wiper. Whenever queried by the media, the Gupta PR hacks went into overdrive: Atul Gupta, former Oakbay Investments CEO Nazeem Howa, and former The New Age managing editor Gary Naidoo would regularly jump in to make sure their charge was shielded from scrutiny. Every statement issued for the young, presentable Zuma was either crafted in Saxonwold, or, after the British reputation management firm Bell Pottinger was retained, in London.

Duduzane Zuma’s default factory setting is blank-eyed obeisance, and he has always—always—done and said as he was told.

Now, it appears that Duduzane has “written” an open letter to former finance minister Pravin Gordhan, a cri de couer that doubles as an inquiry into the rogue cadre’s record in government. The letter was sent from the [email protected] account, which suggests that it was officially crafted in State Capture HQ. It follows attacks on Gordhan by Duduzane’s brother, Edward, who would appear to be leading a rather wobbly charge from the fringes of the Zupta war effort.

Several days ago, a clearly blitzed Edward heckled Gordhan during the Mahatma Gandhi memorial lecture in Pietermaritzburg. Prince Edward’s words contained a beautiful, simple poetry, although his muse appeared to be a bottle and a half of Hennessy, chased by a quart of Chivas:

This fulmination came on the heels a recent open letter that Edward addressed to both Gordhan and former tourism minister Derek Hanekom (penning open letters being the primary family occupation, given that no one associated with Nkandla actually works for a living). This particular letter accused both Gordhan and Hanekom of being “sell-outs”, and small parts of it may actually have been written by someone who wasn’t dead drunk. And yet, Edward’s motivation for his epistolary outrage may not have been simple concern for the country his father has officially governed since 2009. Eddy’s Amalgamated Tobacco Manufacturing (ATM, literally) has been locked in a lengthy battle with the South African Revenue Service since 2011, over claims that he sells contraband cigarettes and massively under-declares his taxes. He insists that as an honest cigarette smuggler, he has been hard done by.

Translation: My father is president! Where the hell are the perks?

Duduzane’s little missive is significantly more polished than Edward’s recent whoopsies. It is titled “Dear Pravin Gordhan – How do you sleep at night?”. It begins by taking Gordhan to task for his poor record as finance minister. “While you were in charge at Treasury,” says Fake Duduzane, “starting in 2009, the South Africa economy flatlined, unemployment rose from 21% to 27% and national debt increased from 31% to a record 51%.”

These numbers are factually correct, and yet they leave out important qualifiers: coming off the back of the global recession, the local economy was growing during this period. However anemic that uptick may have been, it was enough to make many businesses (including Oakbay Investments, of which the young Zuma was a shareholder) significantly richer. This is why no one in a position of power kvetched about Gordhan in the good old days: he was another well behaved ANC apparatchik, doing what was best for the One Percent.

Of which Duduzane is a ranking member.

Not-Actually-Dudu then goes on to accuse Gordhan of executing a personal vendetta against Actually-Dudu and his “business associates”, the Guptas. “It has long been rumoured,” he writes, “that you own shares in various large South African companies, especially financial services, an area where you have consistently blocked a state bank and more competition. Yet you made no public disclosure of your holdings or noted the potential for conflicts of interest with your decision-making.”

Except for the fact that pretty much every South African civil servant owns those shares, albeit through pension funds. And again, the formal banking sector worked wonderfully – too wonderfully, I’d argue –for the Dudu and the Guptas, right up to the point where it didn’t. If anything, bankers should be raked over the regulatory coals not for unbanking the Zupta syndicate, but for keeping their politically exposed asses banked until it became ludicrous to continue doing so.

Neither Fake Dudu nor Real Dudu was bitching about Absa five years ago, that’s for sure. Regular South Africans, however, most certainly were.

Duduzane’s writing team then goes on to list the litany of offenses that “the media has published but chooses largely to ignore” (a tautology that is becoming hilariously persistent): how “monopoly business” dodges Competition Commission charges; how currency rigging banks earn immunity if they cooperate with investigators; how construction companies accused of corruption following the 2010 Fifa World Cup Final are still happily banked.

Ja but hate the game, Dudu, not the player.

Still, on several items, we must agree with the young Zuma and his writers: the system is a mess. What this country desperately required during Gordhan’s first tenure as finance minister, as it did under his predecessor, Trevor Manuel, was a proper conversation about financial policy. Many of the choices that were made by both men, hitched as they were to officially adopted ANC policy positions, have turned out to be disastrous, at least as far as the country’s poor majority is concerned. That indeed is a discussion South Africa should have. Instead, the pages of this news site, along with those of our competitors, are consumed with the sludge that emanates from Saxonwold and its Luthuli House subsidiary.

Perhaps the greatest injury that Zuma has inflicted upon South Africa is that he buried both ideology and innovation under a mountain of endless sleaze. He even robbed us of humanity’s natural birthright: everyone in the world hates bankers. Here, they’re the good guys, relatively speaking. So we blunder through an own-goal recession while the rest of the world booms, howling after state tenders like nyaope addicts after one last fix, while the rich tut-tut over perfectly-plated artisanal lobster tacos.

And at the head of this latest skirmish are Zuma’s own kinfolk, descended from a long proud line of warriors in order to scream for their rightful share of the dirty money. They’re so embarrassing that it makes the eyes water, but they are by no means anomalies. They’re bargain-basement versions of the Trumplets, Donald Jr and Eric, who go after daddy’s enemies whenever such work is demanded of them.

After all, countries are no longer countries, but fiefdoms run by tiny hyper-elites, exclusively for their own benefit. As the democratic experiment unwinds across the globe, morons like Duduzane and Edward become more and more useful: they fly the flag of the Thugocracy, employing either drunken slam poetry or open letters written by their distant masters.

The line of succession may be horrific to behold, but royalty is still very much a going concern. Our new kings are just making sure that they can properly off-shore their thrones to Dubai and other soulless tax havens. DM