Solidarity over Justice: The ties that bind South Africa and Zimbabwe 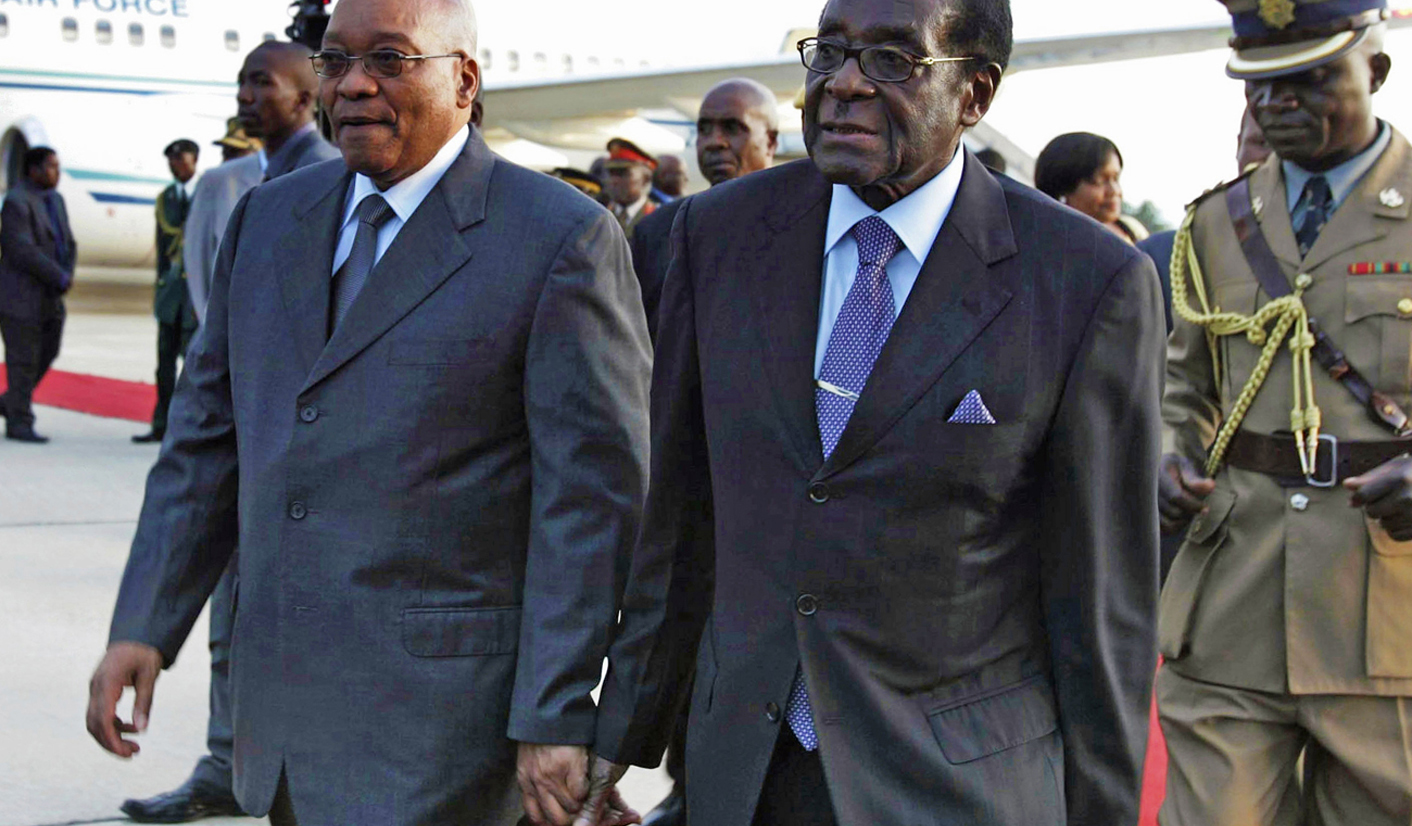 What would have happened if the South African government had not granted immunity from prosecution to Zimbabwe’s First Lady Grace Mugabe for allegedly assaulting 20-year-old South African model Gabrielle Engels in Sandton last week? By PETER FABRICIUS.

Had Grace Mugabe not been granted immunity, would her equally irascible husband, President Robert Mugabe, have thrown his toys out the cot, evicted South Africa’s diplomats and business people, cut of all commerce and isolated South Africa in the region? Or would he have had to swallow his hurt pride, knowing how entirely dependent tiny and ailing Zimbabwe is on its giant neighbour for economic survival?

Experts differ on this.

Most analysts believe Minister of International Relations and Co-operation Maite Nkoana-Mashabane had no choice but to let Grace get off scot free.

Chris Landsberg, professor of African diplomacy and foreign policy at the University of Johannesburg, told Radio 702 that preventing Grace Mugabe from going home last weekend and charging her would have dropped an “unbelievable ton of diplomatic bricks” on South Africa.

The “cantankerous” President Robert Mugabe would have stopped at nothing to “humiliate, embarrass, cut ties, recall his ambassador to South Africa,” Landsberg said. Mugabe would have mobilised his allies among regional governments to isolate South Africa and this would probably have precipitated the cancellation of the annual summit of the Southern African Development Community (SADC) which took place at the weekend and where Pretoria took over as the chair.

Steve Gruzd, head of the Governance and Foreign Policy Project at the South African Institute of International Affairs, partly agrees “that Harare would likely have made things very difficult for Pretoria, in all sorts of ways.

“They would have mobilised SADC against SA, as well as the AU. Perhaps a lesson was learned from the Ken Saro-Wiwa issue in the Commonwealth – don’t turn on another African country,” he adds, referring to the backlash from Africa which Pretoria suffered in 1995 when President Nelson Mandela called for Nigeria to be expelled from the Commonwealth because President Sani Abacha had executed Saro-Wiwa and other activists.

And, as a former diplomat herself, she thinks that when a country invokes diplomatic immunity, as Zimbabwe did for Grace Mugabe, it is usually granted, because all countries wish to maintain their own rights to invoke it themselves if necessary in the future.

Piers Pigou, Southern Africa Senior Consultant at the Brussels-based International Crisis Group, thought that there probably was not much sympathy in the region for Grace Mugabe and her ambitions to succeed her 93-year-old husband.

Still, Mugabe could probably have choreographed “some sort of solidarity dance by regional actors” against South Africa. Pigou added that he thought that Pretoria might have extracted some concession for letting Ms Mugabe off the hook – perhaps securing from Mugabe some sense of who was likely to succeed him.

Pigou said he believed South Africa, like the rest of the region, was getting nervous about what would happen after Mugabe died or was forced to retire, and his wife’s presidential ambitions have added to the anxiety.

He suggested, though, that “letting the law take its course would have been enormously risky”, mainly for economic reasons.

“South Africa does extremely well from its Zimbabwean market,” he said, and noted that Mugabe had already tested this relationship once with the introduction of the “SI 64” measure in 2016, which slapped high tariffs on a wide range of goods imported from South Africa – in defiance of the SADC free trade agreement.

But wouldn’t it have been economic suicide for Mugabe to completely pull the plug on South Africa, economically?

Martin van Staden, Legal Researcher at the Free Market Foundation, thinks so, and as a result, he believes that Mugabe would not have dared do so.

He believes that “the people of South Africa should have expected the First Lady to be detained and for a power meant mainly for affairs of state (the power to grant immunity) not to have been used to excuse criminal conduct”.

Pretoria’s explanation that it was “safeguarding South Africa’s relationship with Zimbabwe” was not good enough “by any standard. The wrath of Zimbabwe, which is, to all intents and purposes, dependent on South African employment, energy and aid, is not something the South African government should fret about. Government should be more concerned with upholding the Rule of Law.”

“This year, a drought has crippled the Zimbabwean hydroelectric station and, like previous years, Zimbabwe now plans on buying more power from South Africa.”

He noted too that Zimbabwe had also in effect exported anywhere between one and five million of its unemployed to South Africa since its economy tanked and that their remittances from South Africa were vital.

Veteran Zimbabwean journalist Peta Thornycroft said, “South Africa has been obscenely tolerant of Zimbabwe’s human rights abuses for many years so this was not a surprise.” And she believes letting Grace off was unnecessary because remittances from the Zimbabwean diaspora – most of them in SA or the UK – provide as much as a quarter of Zimbabwe’s revenue, with another quarter from tobacco exports and half from platinum exports.

“Mugabe wouldn’t have dared shut out South Africa. That would have closed down the Zimbabwe economy completely,” she said, recalling how South African Prime Minister John Vorster had forced Rhodesian Prime Minister Ian Smith to negotiate with the black majority in the late 1970s by slapping an economic embargo on the country.

Thornycroft said just about everything in Zimbabwe’s shops came from South Africa, while its tobacco was exported through Durban and its raw platinum was refined in South Africa.

Trudi Hartzenberg, executive director of the Trade Law Centre (Tralac) in Stellenbosh, also believes that Mugabe would not have dared to retaliate with full-blown economic measures against South Africa, given Zimbabwe’s large dependency on the South African economy, especially for manufactured goods, oil and electricity.

She noted that Zimbabwe had slapped the import restrictions on South African goods last year supposedly to assist local production. The list of restricted imports kept growing but there were no signs that this was stimulating local production. She also noted that Zimbabwe was heavily dependent on South African investment in the country, including mining, construction, services and retail.

By contrast, South Africa was by far Zimbabwe’s largest export market, buying nearly 80% of its goods, and was also its largest import market, providing over 41% of its imports.

These sharply contrasting statistics suggest that Zimbabwe is indeed far more dependent on South Africa, economically, than vice versa, and that, as a result, as Hartzenberg believes Mugabe “would be really crazy to introduce more stringent measures”.

But perhaps that’s the point. Maybe Mugabe is just crazy enough to have brought down the roof on his own head. Games thinks so, noting that that is what he has been doing for the last 17 year – destroying the economy for the sake of retaining economic power.

However, she also believes that South Africa has in some ways got more to lose in any severance of economic relations, just because it has a bigger economy. She notes that over this past weekend both Air Zimbabwe and SAA grounded each other’s flights, in an apparent tit-for-tit by Zimbabwe over flight permits, that may have also been related to the Grace Mugabe episode.

Only one or two Air Zimbabwe flights had been grounded versus nine of SAA’s. “There’s a lot of money to be made in Zimbabwe, not least because it is a strategic gateway to the rest of Africa,” she noted. “The two countries are mutually dependent.” She also suggested that Zimbabwe would have found alternative ports for its exports, such as Beira, even if these were less practical than Durban. DM