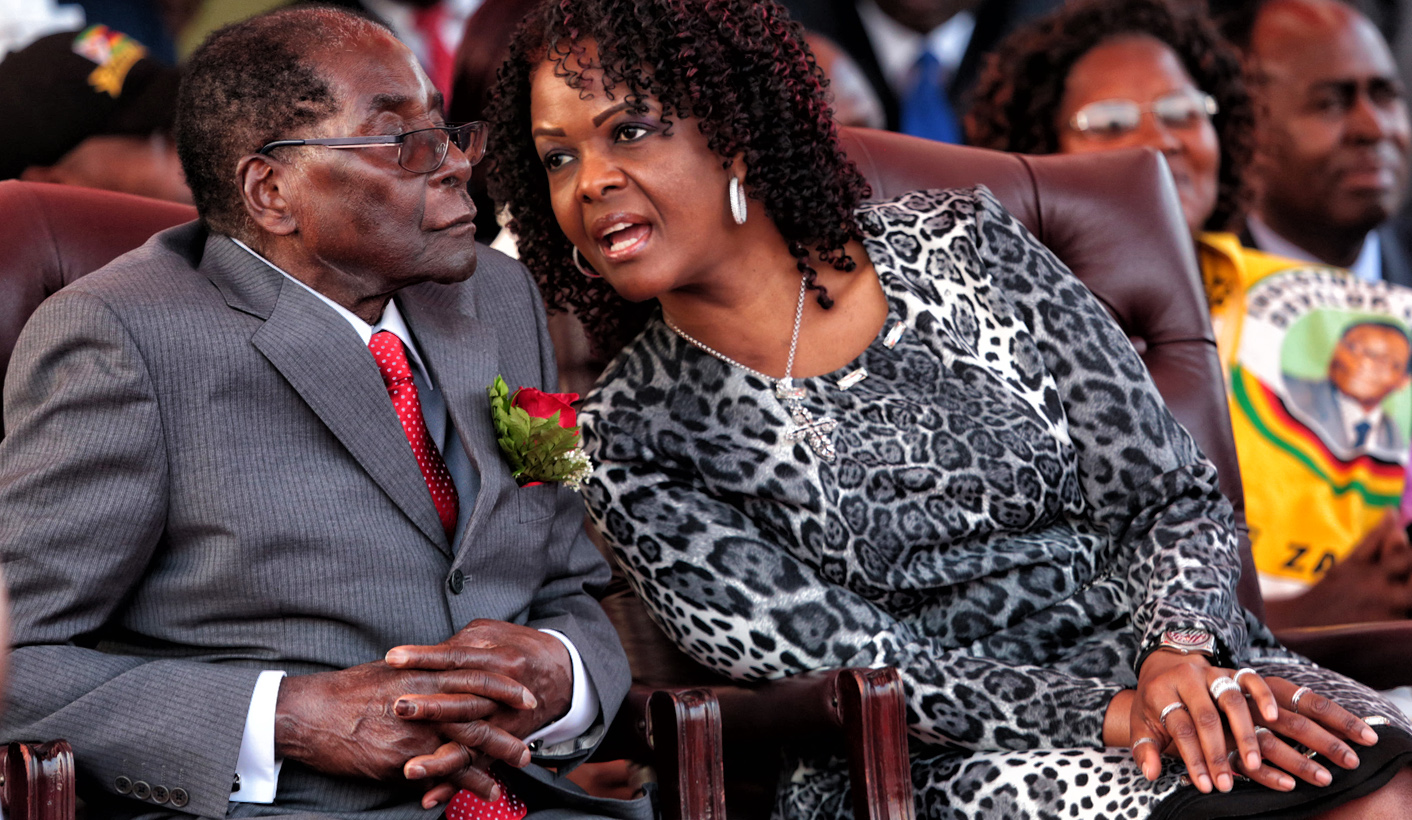 The government has been accused of “blatant abuse of national and international law” for granting Zimbabwean First Lady Grace Mugabe immunity against prosecution for allegedly assaulting 20-year-old South African model Gabriella Engels in Sandton a week ago. By PETER FABRICIUS.

Minister of International Relations and Co-operation Maite Nkoana-Mashabane gazetted a notice granting Mugabe immunity after she had already left the country with her husband President Robert Mugabe on Saturday.

He had been attending the summit in Pretoria of the Southern African Development Community (SADC).

The minister’s delay in granting immunity was apparently a deliberate ploy to forestall any legal challenges to the move before the Mugabes had left the country. The National Prosecuting Authority (NPA) could not lay charges against her while Nkoana-Mashabane was considering whether or not to grant her immunity. And the activist group AfriForum, which took up Engels’ case earlier this week, could not launch a private prosecution until the NPA had decided not to prosecute.

Nevertheless, AfriForum and the Democratic Alliance vowed yesterday that they would not let the matter rest despite Mugabe’s departure and the granting of immunity.

“Mrs Mugabe’s departure to Zimbabwe and the granting of diplomatic immunity by the South African government to her is however not the end of the matter,” Willie Spies, AfriForum’s legal representative, said in a statement. His organisation would assist Engels in bringing a review application in order to set aside the decision to grant diplomatic immunity to Mugabe.

“If the review application is successful (and there are very good grounds to believe that such an application will indeed be successful), the doors will be open for the National Prosecuting Authority (NPA) to prosecute Mrs Mugabe. If the NPA refuses to prosecute, AfriForum’s private prosecuting unit, under the leadership of Adv Gerrie Nel, is ready to go ahead with private prosecution on behalf of Miss Engels, said Kallie Kriel, CEO of AfriForum.

“The fight for justice for Zimbabwe and for Miss Engels will therefore go ahead until it is won,” added Spies.

Meanwhile the DA’s chief whip, John Steenhuisen, said the party would demand an immediate Parliamentary enquiry “into government’s complicity in allowing Zimbabwe’s First Lady Grace Mugabe to flee the country in the dead of night to avoid criminal prosecution.”

Steenhuisen said the inquiry should call on the ministers of police and of international relations and co-operation and defence and military veterans “to account for their failures” in the episode which, he said, demonstrated that the ANC would continue to do exactly what it wanted to do, “to protect their dodgy friends”.

He likened the episode to the government’s failure to arrest Sudanese President Omar al-Bashir in 2015 when he came to South Africa for an African Union summit. As a member of the International Criminal Court, South Africa was obliged to arrest al-Bashir, who is wanted by the court for genocide and other crimes in Darfur.

Professor Andre Thomashausen, former professor of international law at Unisa, said: “The granting of baseless, ad hoc diplomatic immunity to retrospectively shield a person from criminal and civil liability for serious assault charges is a blatant abuse of national and international law.

“It is clearly opportunistic, meaning no actual good reason for such immunity exists other than to cover up a criminal conduct. It taints the government as lacking in respect for international law, compassion for victims of abuse and honesty. It makes a mockery of every due process and will further diminish the international standing of South Africa.”

A Pretoria-based foreign diplomat who asked not to be identified said, “We wouldn’t have allowed this. We would be hammered by our media if we did. It can be justified by a stretch of the law but it is the circumstances in which it was granted that is the problem.”

A southern African diplomat said he did not know all the circumstances of the incident, but if a First Lady had assaulted a citizen of his country, “we would ask many questions”.

The Department of International Relations and Co-operation said in a statement on Sunday that Nkoana-Mashabane had “acted in accordance with the discretion granted to her by section 7(2) of the Diplomatic Immunities and Privileges Act”.

Section 7(2) stated that even if no agreement existed for granting immunity, the minister could in any particular case confer immunities and privileges on a person or organisation if this was in the interests of South Africa.

It added that the minister had granted immunity to Grace Mugabe “after careful consideration of all the relevant factors”.

These included “the need to uphold the rule of law, ensure fair administration of justice and uphold the rights of the complainant”; the imperative to maintain good relations within the SADC region and particularly with Zimbabwe; the fact that the incident coincided with the SADC summit (which ended on Sunday), and legal considerations, “including derivative immunity of spouses of Heads of State”.

The statement added that the minister “has agonised over this matter and the decision was not an easy one”. DM