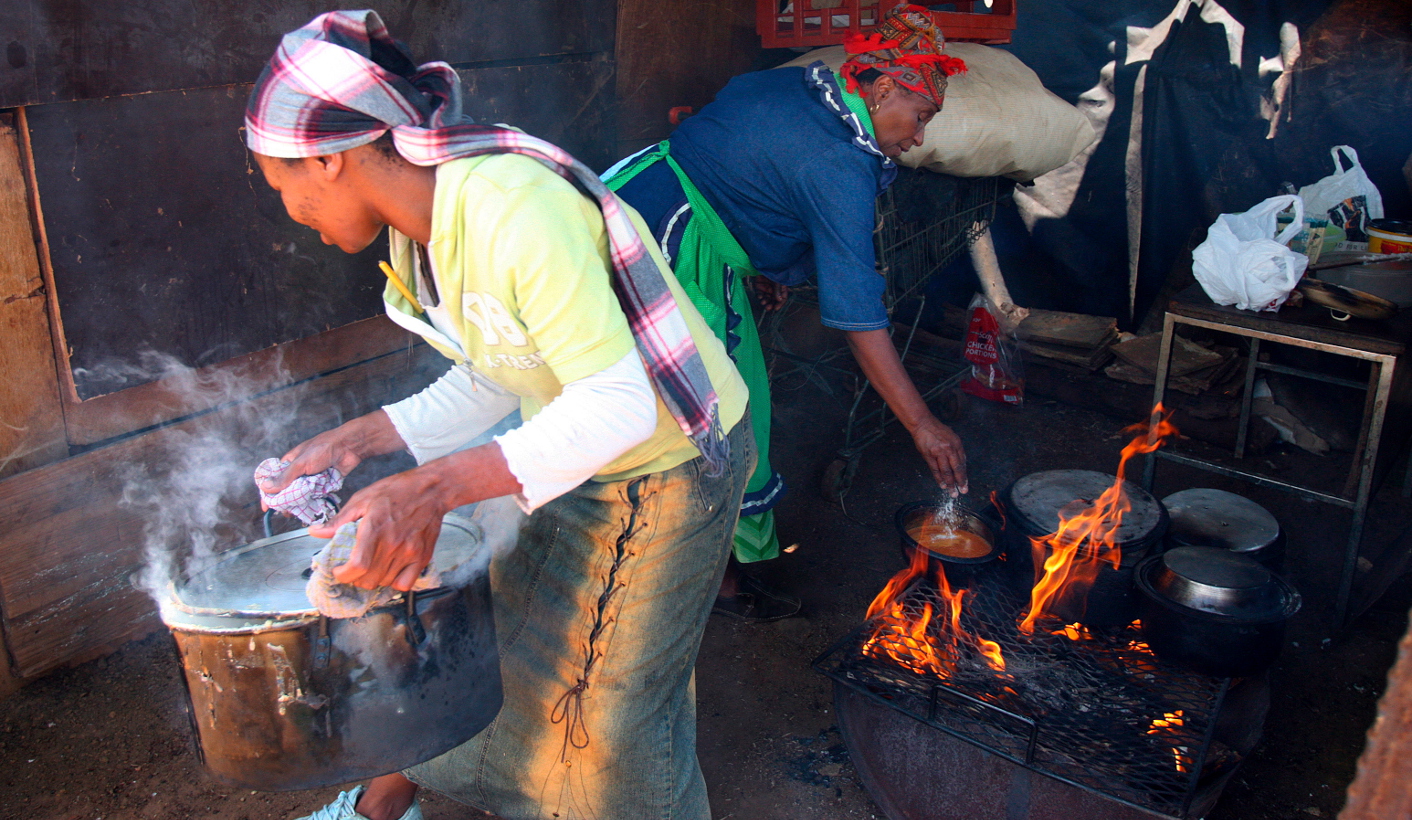 This August the media will focus on women as consumers, as beneficiaries of state services, and as victims, in a much needed effort to bring attention to gender-based violence, but it is important that we don’t forget women as workers, because it’s precisely the invisibility and undervaluing of women’s labour that plays a key role in reinforcing gender inequality. By ANNIE DEVENISH.

Xolisile Mhlongo is already setting up stall by the time Durban’s mynah birds begin chirping on a weekday summer morning. She arrives at Warwick Junction, a busy transport hub near Durban inner city, at 4.30am every day to prepare the meat and dumplings she sells to passing customers.

Across South Africa, in urban and rural centres, at taxi ranks and pedestrian thoroughfares, traders like Mhlongo are setting up shop for the day ahead. They are part of the more than 530,000 street traders recorded by the South African Quarterly Labour Force Survey (QLFS), 70% of whom are women.

Mhlongo works six days a week, commuting from her family home in KwaMashu, a township about 20kms from the city centre. Working long hours, often without adequate toilets and storage facilities, and sometimes in hostile environments facing theft or police harassment, these women generate vital income to support their families and their children’s education.

This August the media will focus on women as consumers, as beneficiaries of state services, and as victims, in a much needed effort to bring attention to gender-based violence, but it is important that we don’t forget women as workers, because it’s precisely the invisibility and undervaluing of women’s labour that plays a key role in reinforcing gender inequality.

Those who are defined as working in the informal economy might be street traders, recyclers, or domestic workers. They could be home-based workers, involved in the production of clothing, catering or child care. Alternatively they could be day or seasonal workers in construction or agriculture.

What is certain regardless of industry is that workers in the informal sector are more vulnerable to risk and uncertainty because they do not have any form of social security or worker benefits, such as sick leave, holiday pay, proper pension schemes, medical aid and unemployment insurance.

And because employed women are more likely to work in the informal sector compared to their male counterparts, they face a disproportionate amount of this risk. Women workers also lack maternity benefits which puts them at a particular disadvantage, because it means that they have no job security when they take time off work to have children, and when they do, they will not receive any income support. Without access to benefits and the buffer of social security, an accident, unexpected illness, confiscation or destruction of stock, or eviction from the work space could spell disaster for such workers, placing their livelihoods at serious risk, and propelling them into a cycle of poverty.

A severe burn accident in 2010 brought this reality home to Mhlongo. She works in the Bovine head section of Warwick market where there is no electricity or running water. Cooking is done with a Primus stove using paraffin. One morning while trying to get a flame going, the lid of the stove came off, dousing her with paraffin and setting her alight. Mhlongo was badly burnt on her shoulders, chest, upper arms and face. Even her eyelids and the inside of her mouth were scorched. She needed specialist care, and was transferred to Addington hospital, a government-run facility on the Durban beach front where she spent three months recovering. During this time she could not work, and would have received no income at all had it not been for a family member who ran her stall for her.

But it’s not just women in the informal sector who face discrimination; in the formal sector too, despite the gains made in educational attainment, women are pigeon-holed into less valued, lower skilled and lower paying industries. And when they do perform the same work as their male counterparts, they are often paid less. This is clearly illustrated by the distribution of female employment across industry sectors, and the pay scales of male versus female workers.

As the report notes these differences are partly the result of the relatively large proportion of women employed as domestic workers. Just under a million women work as domestics in private households in South Africa, making up 14% of all working women in the country, and playing a vital role in enabling their employers to go out to work.

At the top of the employment ladder this imbalance is even worse. Figures show that between 2000 and 2014 only 20.4% of top managers were female, according to the Commission for Employment Equity Annual Report (2014-2015).

All women are workers, even if they are not in the marketplace. This is because they perform the bulk of the productive and reproductive labour of the household, such as cooking, cleaning and gardening, caring for children, the sick and elderly, and providing emotional care and social support to the broader community. This unpaid care work contributes directly to our country’s economic and social development.

A Time Use Survey conducted by Stats SA in 2010 found that women spent nearly four hours per day doing housework and caring for their families and community. This was more than twice the amount of time spent by their male counterparts. The magnitude of this becomes clearer when we put a monetary value on this time and labour. A calculation of the estimated value of this unpaid care work by Debbie Budlender (2008) concluded that of the proportion of women’s unpaid care work as a percentage of South Africa’s GDP ranged between 11% and 30% depending on what type of measure was used. The words of activist George Monbiot certainly do seem to ring true here, that “If wealth was the inevitable result of hard work and enterprise, every woman in Africa would be a millionaire”.

The irony of course is that social welfare policies and practices are often dependent on women’s unpaid care work. At the height of the HIV/Aids pandemic in South Africa, community NGOs and government clinics across the country relied on volunteer workers to provide home-based palliative care to the sick and dying. The majority of these care workers were women who received no compensation, except for a stipend to cover transport and food expenses. By providing a constitutionally obligated service to the populace, these women’s unpaid care work was in fact subsidising the state, assuming the state’s responsibility for health care.

Ensuring an effective health care system is therefore a way of acknowledging and alleviating the burden of the unpaid care work of nursing the sick. Governments and business can also acknowledge the contribution of this invisible care work in relation to childcare, by providing affordable quality child care to enable greater participation of women in the labour market.

Challenging gendered perceptions of care work as women’s work is equally important in order to encourage a more equal distribution of household chores and child care, an approach advocated by the Sonke Gender Justice network. And government policies, such as improved paternity leave, are also needed to reinforce such social interventions.

But change is needed not only at the national level of policy making, but also at a local level, when it comes to infrastructure provision and urban planning. As Francie Lund, former Director of the Social Protection Programme at Women in the Informal Economy (WIEGO) explains, the work environment for traders like Mhlongo at Warwick Junction is defined by municipal rather than national policy. It is therefore the municipal provision of infrastructure in the form of toilets, shelters for traders, improved security, and access to reliable electricity and running water that will make tangible difference to their conditions of work.

August is woman’s month in South Africa, commemorating the 20’000 plus women who marched to the Union buildings on 9 August 1956 to protest the extension of the discriminatory apartheid-era pass laws to them.

Today women like Mhlongo and her colleagues continue to organise as part of the South African Informal Workers Association (SAIWA) to ensure greater recognition of their rights as workers and greater visibility in the workplace. Local and national unions, like SAIWA in turn are tied into global networks such as WIEGO, HomeNet, StreetNet and the International Domestic Workers Federation (IDWF) whose research and advocacy for national and international policy change, and empowerment of local member organisations, seek to make such workers more visible in policy and praxis. Their advocacy is a reminder that the solidarity and power of collective action witnessed by the Women’s March remains as relevant and necessary as ever, and that the struggle for gender justice is far from over. A luta continua. DM

Photo: Informal traders with no water or electricity sell food cooked over open fires in a shack at the entrance to the construction site of Soccer City, the venue for the final of the 2010 FIFA Soccer World Cup in Soweto, South Africa, 16 January 2008. Photo: EPA/JON HRUSA