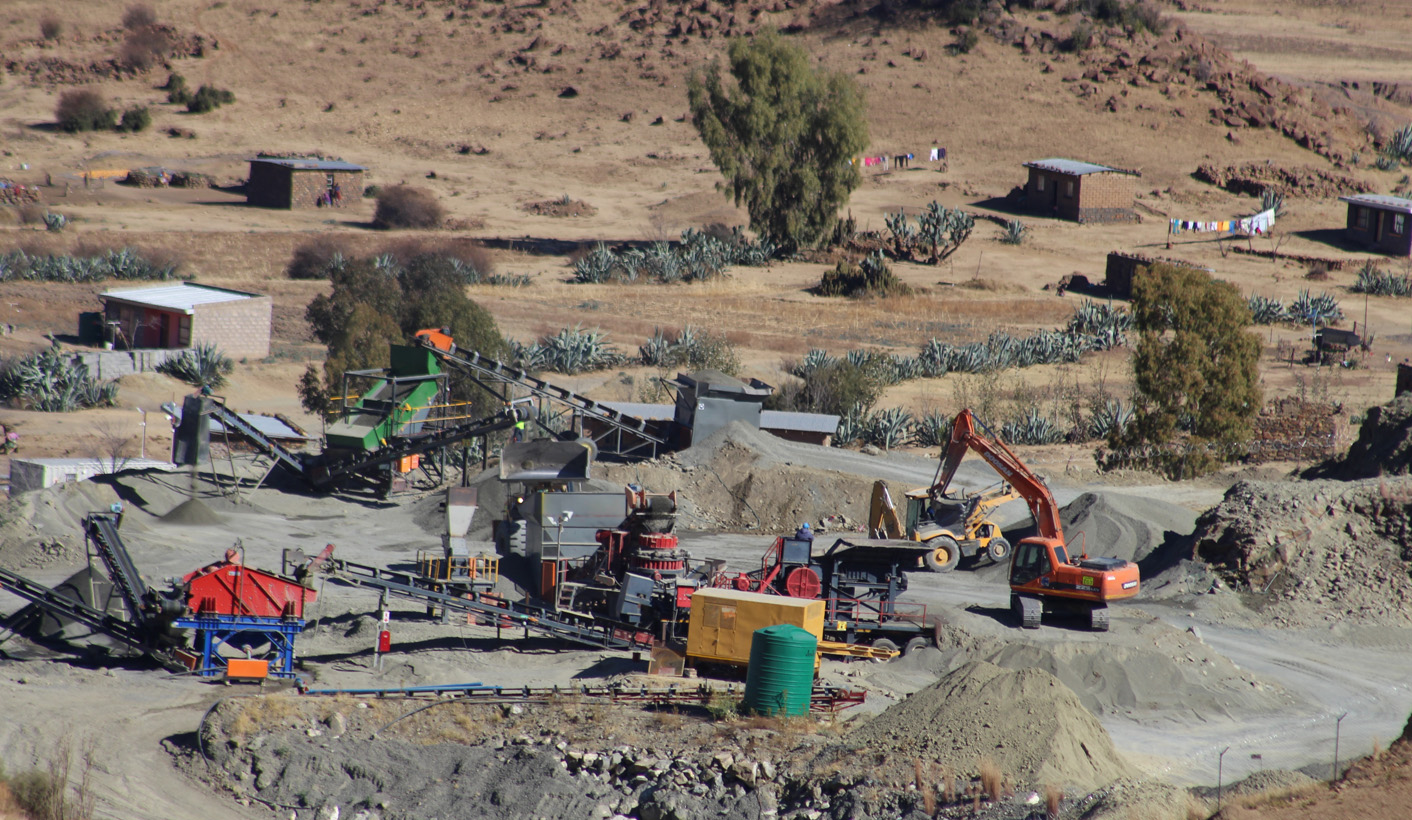 It’s only a matter of time before Mamokuena Bulane’s two fractured houses collapse because of operations at the Reskol diamond mine in Kolo, Lesotho.?But this 52-year-old widow and grandmother of four has a cruel dilemma: she is caught between two mining companies that either won’t – or can’t – accept responsibility for the damage. By MNN Centre for Investigative Journalism Reporters.?

Mamokuena Bulane says the two houses, built by her late husband, began cracking in 2001 because of mining operations.

The MNN Centre for Investigative Journalism (MNNCIJ) can bear testimony to the enormous cracks on the sides and veranda of both houses, which stand cheek by jowl with the mine in the village of Ha-Petlane.

And Bulane is not alone – at least 14 other householders are demanding compensation or relocation. The MNNCIJ spoke to two of them, Mankhakile Lephatši and Mamotšabi Tinte.

The current leaseholder, Reskol Diamond Mining, insisted this week that it is not responsible for the damage because it only began work on the site in October last year. Reskol managing director Mike Reynolds said the community should raise its concerns with the government.

Photo: Signage on the fence of Reskol.

At the same time the previous leaseholder, Angel Diamonds, no longer exists – it has gone bust.?

The government waded into the conflict this week: both newly appointed mining minister Keketso Sello and the environment department insisted the new operator must take over the obligations of its predecessor.

Bulane said that despite the imminent threat to her family, she is disheartened by “endless broken promises” over the years by mine management to relocate or compensate all affected households.

“The lives of my grandchildren are increasingly in danger,” she told the MNNCIJ during a recent visit. Her houses are substantial structures – both have five bedrooms and were built of breeze blocks.

Photo: Cracks in the two-roomed house belonging to Makuena Bulane.

The MNNCIJ has established that the Kolo community, which comprises 40 villages including Ha-Petlane, lodged a series of grievances against Angel Diamonds.

In addition to complaints about damage to houses, residents protested about impassable roads, water scarcity and lack of electricity, which they were adamant the mine should provide under its corporate social responsibility (CSR) policy.? Some of the villagers have also complained that mining operations have unearthed ancestral graves in the village, and that the exhumation of the bodies violated Basotho custom (see story sidebar below).

Before Angel Diamond came into the area in 2006, the Kolo mine was informally operated by the community. That was put to an end by the Mining Act of 2005.

Reskol is a subsidiary of French-listed Batla Minerals, which is listed on the New York Stock Exchange. In 2011, it entered a joint venture with the government of Lesotho on the Kolo Mine, which is about 35km south-west of Maseru. The government owns 10% of the company, which has a 10-year lease from the mining ministry which expires in 2121.

Photo: Makuena Bulane’s house with its stoep cracked beyond repair.

According to Batla Minerals, the Kolo kimberlite pipe has 1.3-million tons of kimberlite containing an estimated 110,000 carats of diamonds.?

Six years down the line Reskol is still in a trial phase that is expected to be completed before the end of this year. If the mine is found to be commercially viable, full-scale production will begin.?

Reskol’s Reynolds said the company had never agreed to remedy the community’s grievances against Angel Diamonds. He added that the company cannot commit to remedial action under its CSR policy “until we have successfully tested the commercial viability of the mine and proceed to the next production phase”.?

He said the company had agreed to relocate six households close to the mine “in consultation with the villagers through their committees, the chiefs and the Mafeteng district administrator”.?

However, the relocation was halted when “it suddenly appeared” that the number of families involved had increased from six to 15. In addition, some families were not satisfied with the location identified by district administrator’s office and the chiefs.?

MNNCIJ saw the relocation settlement in question, which Bulane dismissed as “lone”.

Reskol site manager Lehlohonolo Lesia said the mine could not be held liable for damage to houses because it was using “peckers” – pneumatic drills – to work the kimberlite, rather than heavy machinery.?

But Mining Minister Sello disagreed strongly: “Reskol cannot turn a blind eye to the community’s demands. It is the mine’s corporate responsibility to address issues of the community. They (Reskol authorities) cannot claim the damage was caused by the previous mining company and fail to address those issues. They are bound to inherit that damage,” he said.

Sello said he has yet to visit the Kolo mine “because I have realised there are outstanding issues there that have hindered progress for quite long”.?

The national environment secretariat (NES) in the environment ministry threw its weight behind the minister this week. NES senior environmental officer Mammeli Makhate said that to obtain environmental clearance the department told Reskol that the previous developer had not reported to the department on the effectiveness of its environmental management plan “in mitigating the identified negative impacts, in particular controversial social issues”.?

Photo: View of ongoing operations at the mine.

Against this background, it had advised Reskol to engage “a qualified environmental audit consultant to take stock of the current situation at the mine and map out the way forward to ensure proper management of both biophysical and social environmental impacts of the intended mine. This, Makhate insisted, meant Reskol was regarded as having inherited all damage caused at the mine before it started operations.

The MNNCIJ examined the Reskol project brief submitted to the ministry of tourism, environment and culture in June 2011, which showed that that the mine had committed to relocating three households in Ha-Petlane.? It increased these to five in its proposal to the mining ministry in March 2014.?Environmental officer Tlalane Ramaema also said that Reskol had to submit a resettlement plan to the department. “So far Reskol has not submitted its plan in line with mining laws,” he said. ?

The Transformation Resource Centre (TRC), an NGO that has monitored the situation at Kolo, also condemned the state of affairs in the area. The TRC’s programme officer, Hlalele Hlalele, said the Ha Petlane community had got a raw deal and that the mine continued to violate their rights and customs.?

Hlalele also accused the mining ministry of being “too lenient” in prescribing procedures that company needs to follow.?

Hlalele argued that a project brief compiled by Angel Diamonds undermined public participation processes. He said Reskol seems to be following in its predecessor’s footsteps. DM

Photo: A view of Ha Petlane village with Reskol diamond mine and Mamokuena Bulane’s two cracked houses near the mine. Photos: Supplied

An almighty row has erupted in Ha-Petlane over the discovery that about 30 corpses of the community’s ancestors were exhumed and their bones put into plastic bags before taken to the nearest mortuary during an “unsanctioned” exhumation led by the Reskol mine in Kolo in May.

The remains are now being kept at the morgue in nearby Tšakholo until their reburial, set for 18 August.

What irks the Kolo area Chief Khosi Michael Bereng most is that his subjects are divided over the exhumation, with some charging that it was not authorised by community elders and was carried out by another group of residents in secret.

The MNN Centre for Investigative Journalism learnt on a recent visit to Kolo that during operations at the mine between 4 and 10 May, Reskol staff inadvertently uncovered buried coffins containing human remains.

The corpses were exhumed and taken to the mortuary at Tšakholo, a 30-minute drive from the mine.

The incident had a precedent: in 2009, say mine authorities and villagers, some corpses were controversially exhumed and relocated to a new graveyard at the expense of Angel Diamonds, which operated the mine before Reskol.

One of the villagers, 74-year-old Lesole Thulo, argued that the community had not authorised the exhumation, which was done by Reskol and certain village members who he said had “gone rogue”.

He said the 2009 exhumation was forced on the community by the mine with the police and government authorities present.

“We were shocked to learn that Reskol has done what Angel Diamonds did in the past,” he said. “We should have been consulted as the elders of the community, as we are the ones who know who was buried there.”

Bereng complained that the exhumation violated not only Basotho cultural practices and the country’s laws, “but also moral standards of the community”.

Reskol director Mike Reynolds rejected claims that the exhumation was unauthorised, indicating that the same processes were followed as in 2009.

“We did things in consultation with the committee and chief was also informed. The bodies are being kept in the mortuary at our expense. All these processes are costly to the mine,” he said.

Mamahlape Hlapane, chairperson of the community committee that liaises with the mine, also defended the exhumation, saying that it was carried out correctly, in consultation with the relevant authorities.

Hlapane was one of those present during the exhumation, but said she only witnessed the process, which was carried out by the mine staff.

She argued that as its representative, she had a right to represent the community and did not believe it was a mistake not to include all its members in the exhumation process.

Materai Petlane, the chief of Ha Petlane, confirmed receiving a report from the mine officers that 17 bags were filled with remains. She had not participated in the process and only learnt about it from aggrieved villagers.

But she said her own ancestors had been exhumed and that this should not have happened without consulting her family’s elders.

So intense has been the dispute that some village members, including Chief Bereng himself. sought the intervention of the Mafeteng District Administrator Ntsane Mathibeli.

In an interview Mathibeli expressed worries over “constant” exhumation of bodies by the mine “without a single exhumation of all gravesites and proper re-interment processes observed in line with the families’ traditions”.

Mathibeli has since facilitated agreement between all stakeholders that 18 August will be the date for the re-interment of the 30 bodies.

Meanwhile, officials of the National Environment Secretariat in the ministry of tourism, environment and culture, said this week that Reskol management should have consulted their office and the environmental health department at the health ministry.

The MNN Centre for Investigative Journalism has confirmed that the two ministries were not involved. DM

Melissa Javan for Spotlight • 17 mins ago

Will artificial intelligence herald publishing’s winter of our discount tent?

Mohamed A El-Erian
Save 4 mins