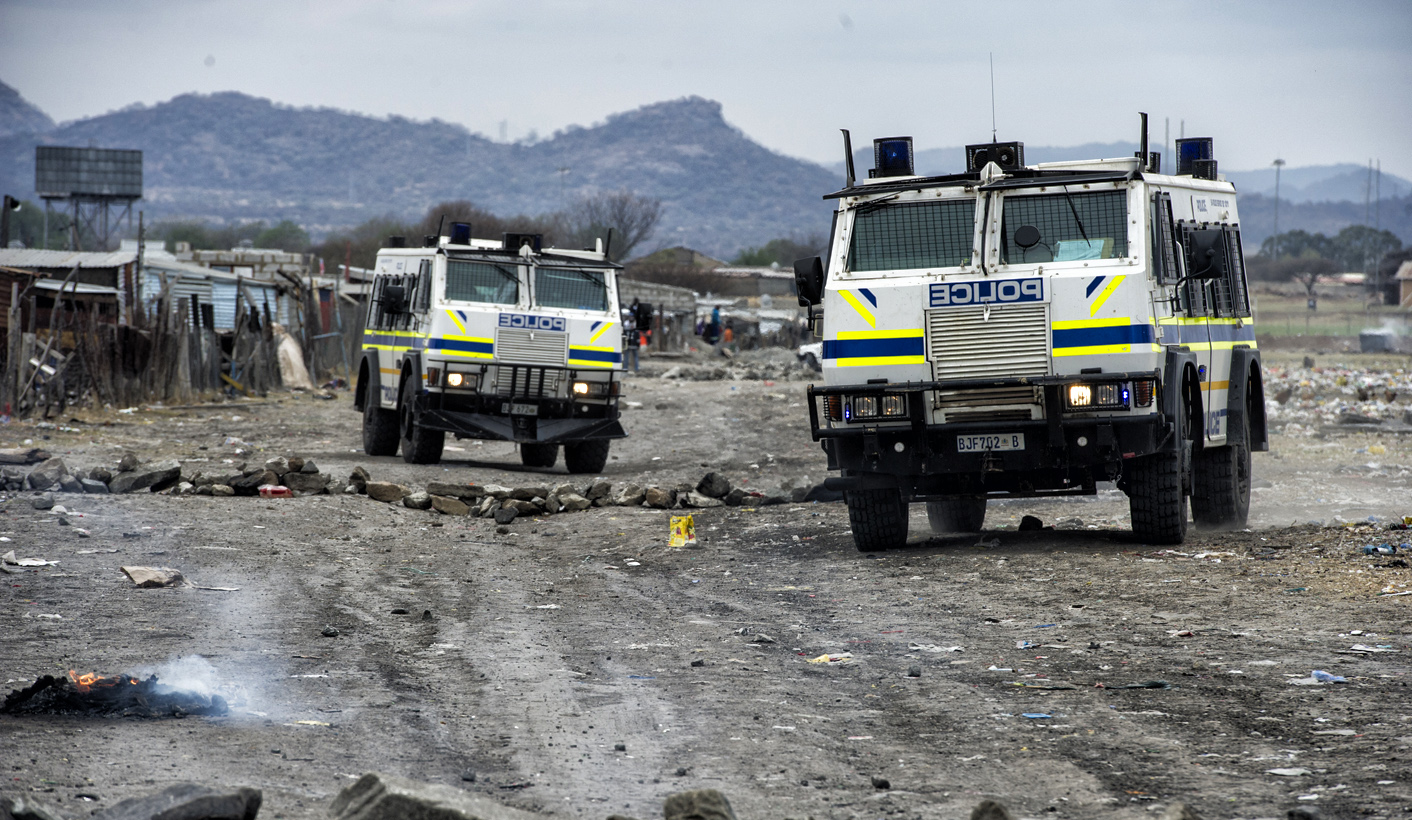 SAPS officers pulled the triggers during the Marikana Massacre and the commission of inquiry recommended the cops reform their public order policing. Those recommendations are yet to be implemented. By GREG NICOLSON.

“South Africa should not have another Marikana,” SAPS said in its final submission to the Marikana Commission of Inquiry. Chairing the inquiry, Judge Ian Farlam heard how SAPS’s failures contributed to the Marikana Massacre. Allegations against senior police officials accused of colluding with politicians to violently end the strike continue to abound, but unless policing is reformed, another Marikana – where 34 people were killed by cops in a day – is a possibility.

The government, ANC, National Union of Mineworkers (NUM) and platinum company Lonmin were all at fault, in some way, for creating the conditions that led to the massacre. It was SAPS officials who decided to implement their disastrous plan and their officers fired the bullets on 16 August 2012. Farlam made recommendations to avoid a repeat of the massacre, but they’re yet to be implemented.

Many of the recommendations being implemented rely on the findings of a panel of experts, which Farlam recommended, and was established by former police minister Nathi Nhleko in 2016. The panel recently received an extension on its work and is likely to finish up by the end of the year. Its key task is to advise SAPS on how to avoid bloodshed during public policing. If there were proper policing protocols and regulations, the Marikana Massacre, and some of the deaths in the preceding days, never would have happened.

Farlam recommended standing order 262 be revised – it dictates how crowd management is regulated by cops in accordance with the Constitution. He called for an investigation into the public order police unit’s methods and said where inadequate they must be replaced by international best practice. He called for further training of publoic order police POP officers according to the expert panel’s findings. Farlam and the inquiry were clear that officers dealing with public order policing should not have R5 rifles, or any automatic weapons. And, crucially, he said the confusion around the tactical unit’s involvement in public order police must be resolved. Tactical units – the Tactical Response Team (TRT), National Intervention Unity (NIU) and Special Task Force (STF) – caused many of the Marikana deaths.

Gareth Newham is the head of governance, crime and justice at the Institute for Security Studies. He also serves on the panel of experts advising government. On Wednesday he said he hadn’t seen a change in how SAPS might use the tactical units during public protests or how it might avoid another Marikana.

Newham said it’s likely tactical units, with deadly rifles, could still be deployed in specific situations as regulations have not, to his knowledge, been changed or clarified. “When they make mistakes people will be injured and they will die,” he said on the tactical units like the STF, NIU and TRT. Newham said we need far greater accountability on when and why these elite units are deployed. If the POP unit feels under threat, they can still call in these elite units who are trained to kill and little is known about their activities.

On the TRT, who were responsible for the killings at Marikana’s scene one, but respond to crime issues on a daily basis, unlike the NIU or STF, Newham said, “It is not completely improbable that TRT are deployed in crowd management situations.”

Farlam recommended the POP unit be both adequately trained and resourced. Newham said in 2006 there were over 7,000 POP officers, those you see responding to protests, but former police commissioner Jackie Selebi’s influence cut that down to 2,500. There’s been an attempt to rebuild the POP unit, after the attempt to outsource the role to tactical units, and in 2014 there were 4,200 officers. By 2020, government aims to employ 11,800 POP members.

They receive decent training and the increase in numbers could help police protests, but the problem is that those officers will be required to both do public order policing and crime prevention. The first is about containment and using non-lethal force; the second will see officers in the firing line and shooting live ammunition. Newham said we need a dedicated POP force that can focus on just POP issues.

There has been some change in policing. There’s been a police national instruction basically overriding the infamous standing order 262. It said that professional public order policing unit leaders must be in charge of crowd control operations and public demonstrations. That would avoid a Marikana-type situation where the tactical teams, rather than public order policing, took control. It might also mean police couldn’t use assault rifles in such situations, although that has not as yet been written down in the regulations.

Neither the expert panel’s pending recommendations nor the changes thus far matter if police members aren’t held to account when they break the law and professional leaders aren’t appointed to head the cops.

This week, Cees de Rover, a policing expert who testified at the commission and is on the panel of experts, wrote, “The power of the panel does not extend to seeing its recommendations converted into professional policing practice.”

He continued, “A credible police organisation will ensure that clear and transparent consequences follow on conduct and performance that go against the laws, regulations and ethical principles governing the profession. Such accountability is completely lacking in the SAPS.” He was damning in his views on SAPS: “There is no effective enforcement mechanism holding officials to account for those breaches of law, professionalism and integrity that are routine within the highest levels of government and policing in South Africa.”

“The systems of accountability are extremely weak,” said Newham. He said it was “astonishing” that 87 cops involved in Marikana were let off by SAPS with no explanation. There are good cops and bad cops, but as the public we don’t know who we’ll get on any given day. “We have no idea what they’re going to do because when they don’t act according to standing orders they’re not going to be held accountable,” he said. The appointment of SAPS leaders, who often have no experience in policing, is a key problem, he said.

Without accountability, it’s unlikely the SAPS will improve, regardless of whether it implements new regulations. The Independent Police Investigative Directorate (IPID) should be the unit holding cops accountable. IPID, which is working with the National Prosecuting Authority (NPA) on investigating Marikana police, has said it doesn’t have the funds or resources to deal efficiently with Marikana issues.

Chairperson of the portfolio committee on policing Francois Beukman acknowledged that the SAPS must work on issues raised in the Marikana report. “There needs to be more funds made available for that environment,” he said. “IPID is under-resourced currently.” Beukman said the committee requested an extra R5-million be allocated by Treasury to IPID but the request was denied. He acknowledged that accountability for SAPS officers and leaders was crucial.

Photo: Police had running battles with residents of Nkaneng shantytown after the police disarmed about 100 miners, one month after the Marikana massacre, 15 September 2012. (Greg Marinovich)