Analysis: It is time to review the appointment of Busi Mkhwebane 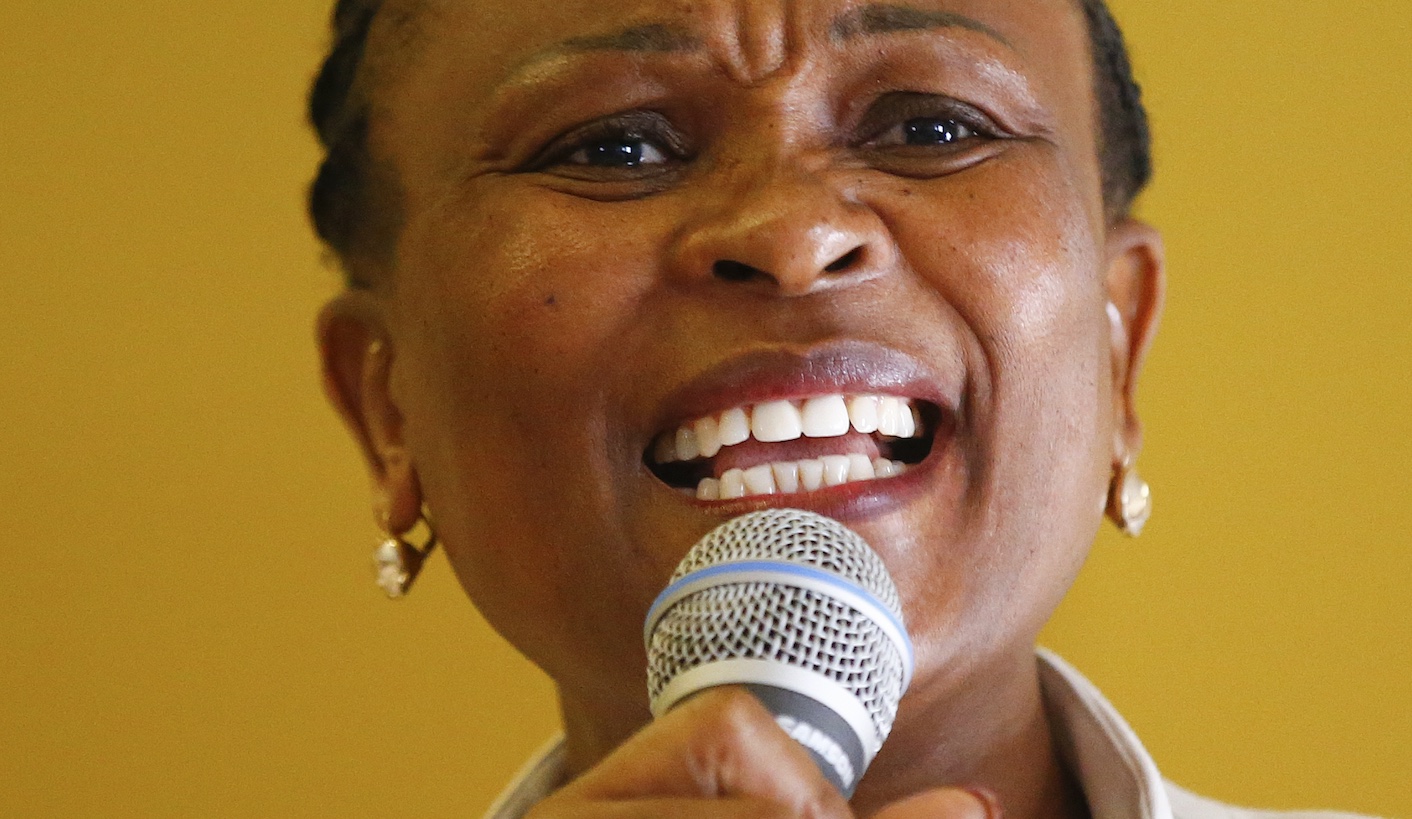 There has been persistent unease about whether the public protector, advocate Busisiwe Mkhwebane, was the fit and proper person to fill Thuli Madonsela’s shoes. After yesterday’s damning court ruling in the SA Reserve Bank case and amid the Zumafication of the country, can we afford to continue to give her the benefit of the doubt? By JANET HEARD.

When interviews were held to select a new public protector last year, Chester Missing hung around outside the Old Assembly, holding interviews of his own as shortlisted candidates emerged after being grilled by MPs. Corruption Watch had roped in the services of the irreverent puppet as part of its national campaign to ensure that the public was engaged with the all-important process to select a fit and proper person to fill Thuli Madonsela’s shoes.

The ad hoc selection committee was chaired by one of Parliament’s most competent MPs, Makhosi Khoza, who delivered an impressive, balanced performance and who has now become a stand-out warrior for accountability in the ANC caucus, at great personal risk.

Although there were stirrings of unease from the start, with questions raised around Mkhwebane’s suitability for the job and later the possibility of her being a former spy, Mkhwebane was given the benefit of the doubt. She got the thumbs up in an overwhelming majority vote in the National Assembly, with the DA the only spoilsports.

Concerns about her have lingered, but now, almost exactly a year later, it seems the joke was in fact on us.

In setting aside Mkhwebane’s remedial action that had called for the SA Reserve Bank to amend its constitutional mandate, Judge John Murphy issued some damning comments. He found that Mkhwebane’s “explanation and begrudging concession of unconstitutionality offer no defence to the charges of illegality, irrationality and procedural unfairness”.

He said it was “disconcerting that she seems impervious to the criticism, or otherwise disinclined to address it”. He added:

“She risks the charge of hypocrisy and incompetence if she does not hold herself to an equal or higher standard than that to which she holds those subject to her writ. A dismissive and procedurally unfair approach by the Public Protector to important matters placed before her by prominent role players in the affairs of state will tarnish her reputation and damage the legitimacy of the office. She would do well to reflect more deeply on her conduct of this investigation and the criticism of her by the Governor of the Reserve Bank and the Speaker of Parliament.”

By all accounts our public representatives, in full view of all of us, the public, selected a public protector who at best is a lightweight and out of her depth, or at worst is working to a sinister political agenda that is part of the Zumafication of the country. If the conspiracy proves correct – and let’s face it, nothing is implausible any more – then President Jacob Zuma pulled off a masterful trick by getting his puppet in to head the public protector’s office – the powerful corruption-busting Chapter 9 institution that was the bane of his existence under Thuli Madonsela.

It is ironic that a process which on the face of it was widely hailed as one of the most transparent, accountable, competently steered and flawless ever, could deliver a candidate who right now, a year later, already appears to be beyond redemption.

But of course, the unease was there all along, with questions about the exact nature of her State Security Agency links being raised during the interview process, and which to date remain not clarified. On the eve of the vote in the National Assembly, the DA went further and accused her directly of being a spy, adding that the public protector’s office would be at risk of state capture if she was selected.

Another flaw in the process is the human factor. MPs were distracted and had a lot on their minds at the time that the ad hoc committee sat to select a new public protector. They sat hurriedly as the extended parliamentary recess kicked in for the build-up to the local elections, which meant they were flat out in electioneering mode. They returned to Parliament especially for the lightning-paced shortlisted candidate interviews on 11 August, just a week after the local elections, but before the first sitting of Parliament after the recess, which only took place on 23 August. MPs could not be blamed for being a bit fuzzy and fatigued, not to mention preoccupied with digesting the far-reaching implications of the election results.

A final short-list of five candidates was drawn up in some haste and Mkhwebane’s nomination went through with little fuss, along with Muvhango Lukhaimane, Professor Bongani Majola, Judge Sharise Weiner and Western Cape judge Siraj Desai, who was suspected of being the ANC’s preferred candidate but who may have been a stalking horse.

When one looks at the factors, it becomes easier to see the possibility of a conniving cabal within the ANC sneaking through a particular candidate without anybody catching on.

Then of course there was also the hurried nature of the back-to-back interviews of the 14 short-listed candidates on 11 August. This meant that interrogation was not always thorough, and some questions left hanging. Corruption Watch observed at the time that this was the only serious flaw in the process:

“They were conducted on one day, which hardly was conducive to a sustained level of inquiry that certainly required more than an hour per candidate.”

However, Corruption Watch also pointed out that there were remedies:

“Candidates, who may have manifestly answered questions incorrectly with studied ambiguity, or even where they were not able to explain failures to disclose material information, could be the subject matter of a judicial hearing, were one of them to be appointed. This then narrows the field and expands the possibility of a worthy successor to Madonsela being appointed.”

So what now? At the time, the EFF backed Mkhwebane’s appointment but vowed to take it on judicial review if she messed up. By January, the EFF were already saying they regretted backing her, calling her a “Gupta puppet”. The DA has refused to retract accusations that she was a former spy, a claim Mkhwebane has denied, though this is a professional calling that is pretty hard to prove either way.

South Africans can sit it out and optimistically wait to see if Mkhwebane can redeem herself. Or she can be put on the spot. How many more signs are needed? After Tuesday’s high court finding, it seems apparent that the appointment of the public protector was indeed a bad joke and should be reviewed. DM