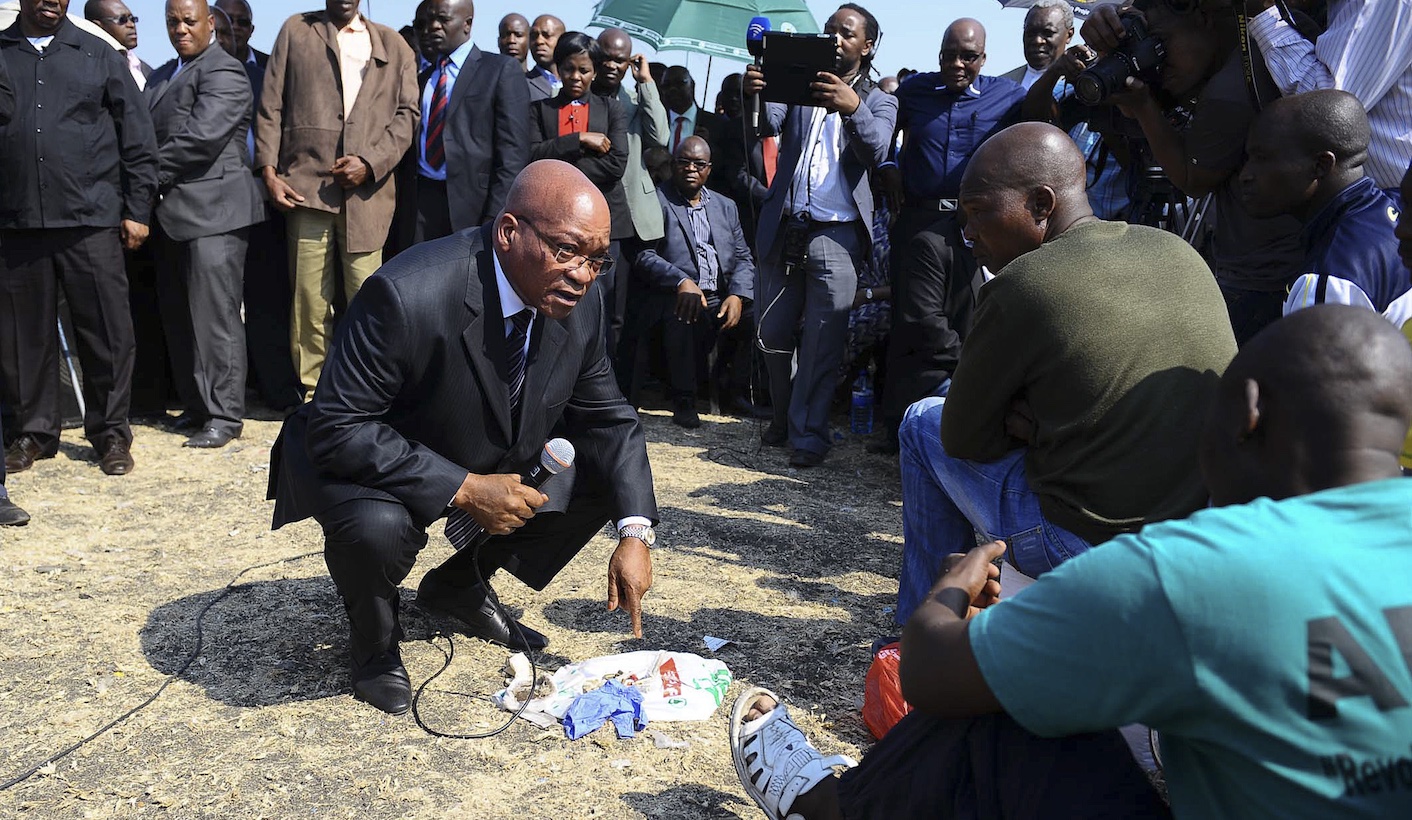 On the fifth anniversary of the Marikana Massacre on 16 August, it is timely to recall the actions and inactivity of our President and Deputy Present regarding the ghastly killings. By PETER ALEXANDER.

Back in early December 2016, President Jacob Zuma received the report of the Claassen Board of Inquiry into allegations of misconduct against National Commissioner Riah Phiyega. The report, which was leaked, was forthright in its conclusions. It gave three reasons why she should be removed from office, including her failure to halt the “tactical option” that led to the deaths.

Eight months later, Zuma has still not made the report public. Instead, in June, Phiyega was allowed to drift off into the sunset or retirement on full pay.

There is at least one possible motive for the President’s lethargy. Claassen concluded that Phiyega had amended a media statement to conceal Scene 2, where, according to the Farlam Commission’s Evidence Leaders, there was a “paramilitary operation” aimed at “annihilating those who were perceived as the enemy”. However, Zuma had received an undoctored report, which included the events at Scene 2, thus he was an accessory to the attempted cover-up.

On 11 December 2016, the President’s office released a statement on steps taken to implement the Farlam Commission’s recommendations. The highlight was details about criminal cases opened against senior officers involved in the Marikana killings (at the railway line on 13 August 2012 and at Scene 2, but not at Scene 1). These included four counts of murder against Major-General William Mpembe. the Overall Commander at Marikana. So far, no charges have been laid by the Director of Public Prosecutions (DPP).

Further back, on 2 February 2016, the Independent Police Investigative Directorate (IPID) reported that cases against Phiyega and Provincial Commissioner Lieutenant Zukiswa Mbombo had been referred to the DPP, and that case files for defeating the ends of justice had been opened against Major-General Ganasen Naidoo and Brigadier Ledile Malahlela. Again, no charges have yet been laid.

By 19 March this year, IPID reported that 72 Marikana police offices had been identified for prosecution including Phiyega, Mbombo, Mpembe, Naidoo and Malahlele. Still, no charges.

All these matters are in the hands of the DPP, but Zuma tolerates the director’s lethargy and his utter failure to bring any Marikana cops to book.

Turning to the Deputy President, Cyril Ramaphosa has recently attempted to exonerate himself. Choosing his words carefully, he told Parliament:

“What I was dealing with, the intervention I was seeking to make, was to try and stop further killings from happening. And, for me, this was sparked off by the killing of the 10 people who had died earlier; and the killing of those people had happened in the most gruesome manner. And some of those people were police; the majority of them were mineworkers.”

The problem with this statement is that it was not the killing of 10 people before 15 August that “sparked” his intervention, but the killing of two security guards on 12 August. Soon after the guards had been killed, Ramaphosa called Minister of Police Nathi Mthethwa. He urged him to send police to Marikina and said that what was happening was not “pure industrial action” but “criminality” (this comes from Mthethwa’s recollection).

There was nothing illegal about Ramaphosa’s contact with the minister, and some people might find it laudable that he used his influence to strengthen the police presence. So why not start his narrative of intervention on 12 August? It is worth noting that he was consistent in his story – also telling it to Rhodes University students and the Sunday Times.

Why does he have a problem with telling the full truth? There are a number of possible answers.

First, police action was directly responsible for the five “railway line killings” that occurred the next day, 13 August. That is, the police, notably Mpembe, were implicated in half of the 10 deaths. Ramaphosa should have been more circumspect when demanding police intervention.

Second, as the commission acknowledged, his discussions with Mthethwa were “likely [to] have been a factor in [the] decision … to move to the tactical phase”. While Ramaphosa cannot be held responsible for unintended consequences of his intervention, he might feel that a one-sided emphasis on “criminality” was, to say the least, misguided.

Most likely, Ramaphosa is concerned to exculpate himself from the implications of his emails sent on 15 August, the day before the massacre. In his recent statement, he conveyed the impression that his involvement on this second occasion (after a total of 10 deaths) was purely benevolent, but perusal of the emails shows this was not the case.

At 09.43 on 15 August, Albert Jamieson, Lonmin’s Chief Commercial Officer, told Ramaphosa he wanted the 800 police then at Marikana to “take appropriate action so we can get people back to work”. This comment surely implies that police should assist in strike breaking. Ramaphosa did not contest this. Instead, he focused on winning support for the stance that, as he put it at 14.58: “what we are going through is not a labour dispute, but a criminal act”. For him, the “criminal act” was singular, a collective guilt, not killings by specific individuals.

According to Ramaphosa, writing in an email timed 00.47, he had even gone so far as threaten Susan Shabangu, the Minister of Mineral Resources, “that her silence and inaction [about the ‘criminal act’] … was bad of her and the Government”.

So, Ramaphosa’s recent spin disguises the unpleasant reality that on 15 August he was securing support for action that led to 34 deaths the following day. Whatever his motives and expectations, rejection of negotiations meant that some deaths would follow.

Thus far, Ramaphosa has only apologised for “inappropriate language”. But, it is his deeds and ommisions that were questionable, not a few wayward words.

The media has been briefed that the Deputy President will be making his apology to Marikana widows on 16 August. The warmth of his reception remains to be seen.

It will doubtless be a little more sympathetic if he called for Phiyega’s immediate sacking, for urgent prosecution of cases the DPP is sitting on, for sufficient funding to enable IPID to complete its work (including investigation of Scene 1), for charges to be brought against all Lonmin officials who knew in advance about the tactical phase and failed to prevent loss of life, and for payment of compensation to the widows without further quibbling on the side of the government.

An apology might be a little more palatable if, instead of claiming that his primary motive was to prevent loss of life, Rampahosa was honest and said that, as a director of Lonmin and its biggest shareholder, his first priority was to support the company’s interest in limiting improvements in workers’ pay. He might add that Zuma also played a part in the event, at least in the cover-up of the massacre. DM

Peter Alexander is a professor of sociology at the University of Johannesburg, where he is Director of the Centre for Social Change. His reports on Marikana include an assessment of the Farlam Commission published in the Journal of Southern African Studies. He is a member of the Marikana Support Campaign.