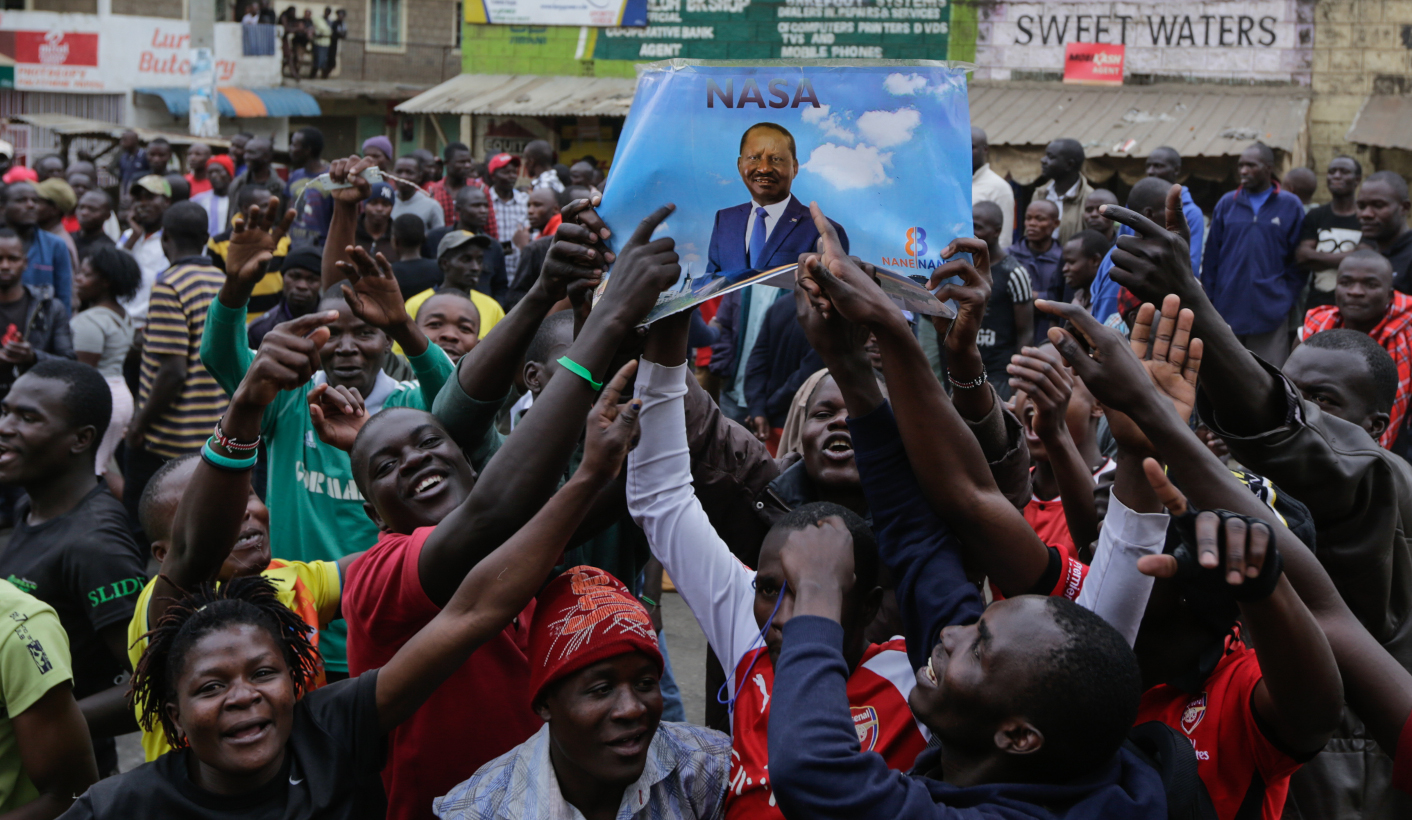 Election observers in Kenya, in interim reports on Thursday, gave short shrift to Raila Odinga’s complaint that the electoral commission’s computers had been hacked to give Kenyatta a fraudulent lead. By PETER FABRICIUS.

Kenya’s perennial presidential hopeful Raila Odinga turned up the post-election tensions several notches on Thursday by demanding that the electoral authority immediately declare him as the winner of Kenya’s presidential elections.

Raila Odinga’s National Super Alliance (NASA) announced this after election observers from Africa, Europe and the United States had all basically endorsed the election commission’s handling of the elections. That lent strong impetus to what will now almost certainly be another official victory for incumbent President Uhuru Kenyatta and his Jubilee coalition.

The observers who issued interim reports on Thursday gave short shrift to Odinga’s complaint that the electoral commission’s computers had been hacked to give Kenyatta a fraudulent lead. They urged Odinga to challenge the results only through the courts peacefully and not to order his followers out onto the streets. But Odinga took a more provocative and potentially dangerous line when one of his fellow NASA leaders, Musalia Mudavadi, announced at a press conference in Nairobi that NASA’s own count of the votes showed that Odinga had actually won by a margin of 8,041,706 to Kenyatta’s 7,755,428.

Odinga rejected the different current tally which was being broadcast by the Independent Electoral and Boundaries Commission (IEBC) that at that point showed Kenyatta clearly in the lead with 8,056,885 votes to Odinga’s 6,659,493, a margin of some 54 to 45%.

Mudavadi demanded that the IEBC immediately stop releasing results and declare Odinga and his running mate Kalonzo Musyoka as the winners of the presidential election.

Musavadi distributed printouts of what he said were pages from the IEBC’s website which he said had been leaked to NASA by an anonymous IEBC official, showing the “undoctored” results proving that Odinga had actually won.

Asked if NASA now had any message for its supporters, he said Odinga would make a statement once the IEBC had announced the official results. In the meantime Mudavadi, referring to Musyoka’s controversial earlier statement, said that NASA might come to its supporters later, but that they “should remain calm at this point in time.”

Election observers were dismayed by NASA’s posture. “This is going to get very messy,” said one, anonymously.

Earlier, in a series of press conferences, the main election observer missions had urged NASA to take a different, more responsible, course, challenging the election results peacefully and legally.

They all essentially endorsed the IEBC electoral process as legitimate so far.

It was not completely surprising that the several African election missions which observed the elections gave it a universal thumbs up, as they are generally more sympathetic to elections by fellow Africans. Former South African President Thabo Mbeki, head of the African Union mission, even went as far punting it as an example to be emulated by other African countries.

However, it was the endorsement of former US Secretary of State John Kerry, who headed the US Carter Center’s election observer mission, which was probably most important to the Kenyan government.

Odinga had made the charge that the IEBC computer systems had been hacked to change the voting results transmitted from polling stations to give Kenyatta what now looks like an insurmountable lead.

But Kerry pronounced, “The bottom line is that we believe the IEBC put in place a detailed, transparent process of voting, counting, reporting and securing the vote, all of which lends significant accountability and therefore confidence in the results.”

Odinga took up his hacking complaint with all the election observer missions on Wednesday night. But none of them seemed too impressed. Mbeki and members of the observer missions of the European Union, the East African Community and the International Commission of the Great Lakes Region all stressed that it was beyond their technical abilities and their mandates to investigate the alleged hacking. They all urged the IEBC to do so.

But Kerry went further, emphasising, “In the end, it is the paper ballots and the accounting process established by the IEBC that tell the story of this election – not the electronic transmission of those numbers.”

He noted that after Odinga’s NASA made the claim that the electronic electoral system had been hacked, the IEBC had agreed on Wednesday to verify all the results by manually checking all the “34A” paper forms which had been filled in at all of the country’s 40,883 polling stations and also the constituency centres, around the country.

“It is our firm conclusion that the IEBC has put in place, and is thus far following, a detailed process of paper ballot counting and security which, if followed through the final steps, can give each Kenyan confidence their vote was properly recorded and that therefore, this election can appropriately certify the outcome,” Kerry added.

“Yes – we observed minor variances here and there that evidenced deviation from the established process – but none that we thus far feel affected the overall integrity of the process.”

Though some things need to be corrected, these were minor.

“We witnessed agents for many candidates all being simultaneously included in reaching an understanding of what constituted a valid ballot.

“All of this provides an extensive, traceable trail of agreement by many parties on the paper balloting process and outcome – including a majority of stations where both NASA and Jubilee agents were present.”

Kerry stressed that the election was not over as the manual verification of the electronic results was still under way. But if the electoral process remained on track, it would deliver a result which reflected the will of the Kenyan people, Kerry suggested.

“Above all else this election belongs to the people of Kenya. It is their hopes for the future that are on the line. …We are not here taking the side of any candidate. Our allegiance is to a peaceful, transparent, accountable, free and fair election.

“And we call on all candidates to work within the rule of law and legitimate dispute process to challenge any aspect of the election they have evidence made a material difference in the outcome.

“The judicial system of Kenya and the election laws themselves make full and adequate provision for accountability in this election. The streets do not.”

Without naming him, Kerry implicitly rebuked Odinga’s running mate Kalonzo Musyoka for making a statement on Wednesday that NASA supporters should wait for orders from their leaders before going out onto the streets to protest against the election result.

Meanwhile the AU election mission headed by Mbeki also noted some minor errors and discrepancies but concluded that “the processes we were able to observe, up to and including the counting of the votes at the polling stations and their transmission to the IEBC, met the standards set by Kenya and the AU for the conduct of democratic elections.”

The European Union was more guarded in its interim assessment of the elections. Its observer mission, headed by Dutch Member of the European Parliament Marietje Schaake, listed many criticisms, including that the IEBC had only been appointed in January and had not had enough time to implement a lot of new technology and other measures.

It said NASA’s complaints that the electronic system had been hacked were “serious allegations that need serious scrutiny”. It added that the EU mission was looking into them but then said – as did all the other observer missions – that it was up to the IEBC and other responsible Kenyan authorities to investigate.

Schaake was asked in an interview if this approach meant that the EU had full confidence in the integrity and competence of the IECB. She said that the EU would, in its final report, assess how the IECB dealt with the investigation.

She stressed, like Mbeki, that they are “observers, not investigators”. DM

Photo: Supporters of opposition leader Raila Odinga react after a press conference by their leaders in Mathare North, one of Odinga’s strongholds in Nairobi, Kenya, 10 August 2017. Raila Odinga and other opposition leaders held a press conference where the co-principal Musalia Mudavadi said they believe Odinga to be the rightful winner of the presidential poll according to their own counts. Provisional results of the Presidential poll shows the incumbent Uhuru Kenyatta to be leading. Photo: DANIEL IRUNGU (EPA)