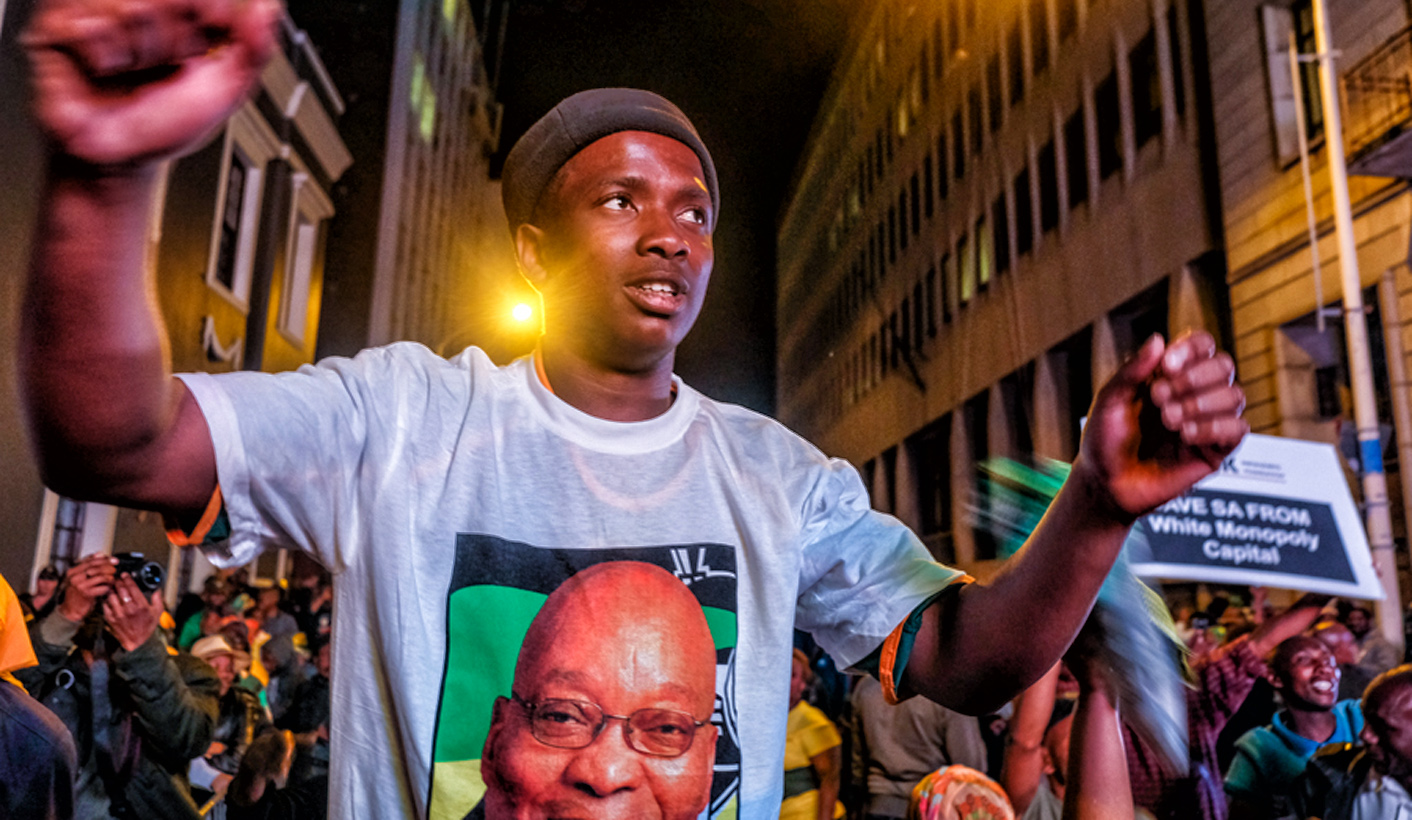 Immediately after the #zumavote in the National Assembly, politicians and analysts had their sound bites at the ready for the inevitable bombardment from journalists on the precinct – even before their own number-crunching analysts had tallied up the implications of the vote. By JANET HEARD.

“It is a win-win for the opposition,” remarked author and political commentator Richard Calland, who, conveniently for journalists, was situated in the media gallery throughout the afternoon’s proceedings.

“About 30 ANC members voted (or abstained) with the opposition. That is a victory they can claim. Yet, Jacob Zuma stays in power as president, which is the best elective asset the opposition has in the build-up to the national elections of 2019,” he said.

Leaving the upstairs media gallery, I bump into Rivonia trialist and ANC stalwart Andrew Mlangeni in the corridor. Aged 91, Mlangeni has spent the day watching proceedings from the VIP gallery. In the corridor, he posed patiently for admirers who wanted to take selfies with him.

Mlangeni is thoroughly polite, but reserved on verbal detail when asked to analyse the outcome of the vote – which was 177 for the vote of no confidence, 198 against and 9 abstentions for a total of 384 votes. (Bearing in mind that the opposition have 151 seats altogether, of a total of 400).

Mlangeni is a a stalwart, which means he is a survivor. He is also chairperson of the ANC’s Integrity Commission. His feelings about President Zuma are well known, especially to Daily Maverick readers, after it was revealed in April that the commission wanted Zuma to resign.

Mlangeni said he was not surprised that the ANC squashed the motion, and that the opposition was optimistic in thinking they could swing up to 50 members of the caucus.

Pushed about whether Zuma should be sent packing, Mlangeni said: “My views are known … by the leadership.”

Outside on the precinct, politicians hold forth as journalists swirl in dizzying directions trying to get the quickest, sharpest and most comprehensible sound bite, preferably on their own but often gathering in clumps. It can be tough trying to get the attention of party leaders with a pen, notepad and cellphone, but it pays to hang with the television crews, who click their fingers and the politicians flock to them for a sound bite in front of the camera.

ANC spokesperson Zizi Kodwa tells ENCA, and another journalists who were within earshot, that what took place was “democracy in action”.

“It was a frivolous motion, with the aim of collapsing government. The ANC has always understood that. We never doubted that, or that the ANC represents the masses. We witnessed democracy in action.”

He suspected that some of the nine MPs who abstained could have come from opposition benches. He said that because of the secret vote, nobody would be the wiser.

Kodwa said President Jacob Zuma was upbeat and not at all anxious, and was addressing supporters outside Parliament as we speak, and on Women’s Day on Wednesday.

United Democratic Movement leader Bantu Holomisa was understandably, particularly smug. After all, he is the veteran politician who had the guts – and insight, thanks to a skilful legal team that included Dali Mpofu and Dumisa Ntsebenza – to challenge the Speaker’s view that she could not hold a no confidence motion in secret.

“I am happy with the outcome. Over 20 ANC members voted with the opposition. Most importantly for me, they are safe, they cannot be harassed or intimidated. MPs are safe. That was my intention.”

Holomisa said the ANC could no longer say it was in control. “It was a hollow victory for the ANC. It went down to the wire, with only 11 votes that divided us.”

And the fight continues, with an impeachment challenge taking place in the Constitutional Court with the EFF and other parties in September, and the ongoing saga of Zuma’s attempt to circumvent criminal charges for corruption.

The Congress of the People’s Mosiuoa “Terror” Lekota appeared ambivalent about the outcome. “There was a belief that there would be a majority in favour of a no confidence motion … but I am not disappointed. This outcome sent a message to communities, that this is what happens if you give your mandate to guys who insist on supporting corruption, the Guptas.”

He believed that the dents in the ANC support base were telling, and paid tribute to the courage of ANC MPs who had had the guts to speak out publicly against Zuma, state capture and corruption – i.e. Makhosi Khoza, Pravin Gordhan, Mondli Gungubela and Derek Hanekom – at a huge risk to their life and their career.

Understandably, as an opposition MP, Lekota had no hope that the ANC could redeem or renew, however, and said that Zuma had given the ANC “a kiss of death” come 2019.

DA leader Mmusi Maimane was also in front of the cameras. “We are disappointed that Zuma stayed. He should resign now.”

He said that the legal costs and time spent on the build-up to the motion was well spent, “good for democracy and accountability”.

Never before had ANC MPs ever voted with an opposition motion. He said: “It proves that Zuma doesn’t enjoy overwhelming support.”

Acknowledging that anti-Zuma sentiment was a drawcard for the opposition campaign ahead of the national elections in 2019, he said: “For the purposes of SA, Zuma must go, the sooner he goes the better. We need to fight the election on ideas, on jobs and the economy, not Zuma. We are sick and tired of Zuma.”

Last up is the EFF. There is a clamouring by the media for the attention of Julius Malema, with his competent sidekick, Mbuyiseni Ndlozi, trying to co-ordinate media coverage instead of just making the sound bites himself.

The SABC cameras hit on Malema about the implications of the vote. He replies: “This is a big elephant. We always said that we would eat it piece by piece. More is to come. There is the impeachment case [in the Constitutional Court], and Zuma’s appeal on criminal charges. We are putting on more pressure.”

Malema said the “35 ANC” MPs who split ranks on Tuesday realised that anything was possible. “They realised they are not alone.”

He said that the vote had revealed cracks in the ANC. “Emerging from caucus in the morning, they said there would be a united ANC. Tonight they have been proved wrong. The ANC is finished.”

As he is speaking, an ANC supporter, Nombeko Leputhing, emerges among the crowd and yells at Malema, accusing him of hypocrisy, of being responsible for giving the country Jacob Zuma in the first place. “In the ANC Youth League you were my president. You said Mbeki must fall. You loved Zuma, you motivated for Zuma. We still love Zuma,” she shouted.

As the crowds dissipated from the precinct about 8 pm, the thumping music from ANC partygoers on the streets outside could be heard, Struggle songs praising stalwarts such as Luthuli, Tambo – and yes, Jacob Zuma. DM