Kenyan Poll: Opposition cries foul over alleged elections cheating, but at what cost? 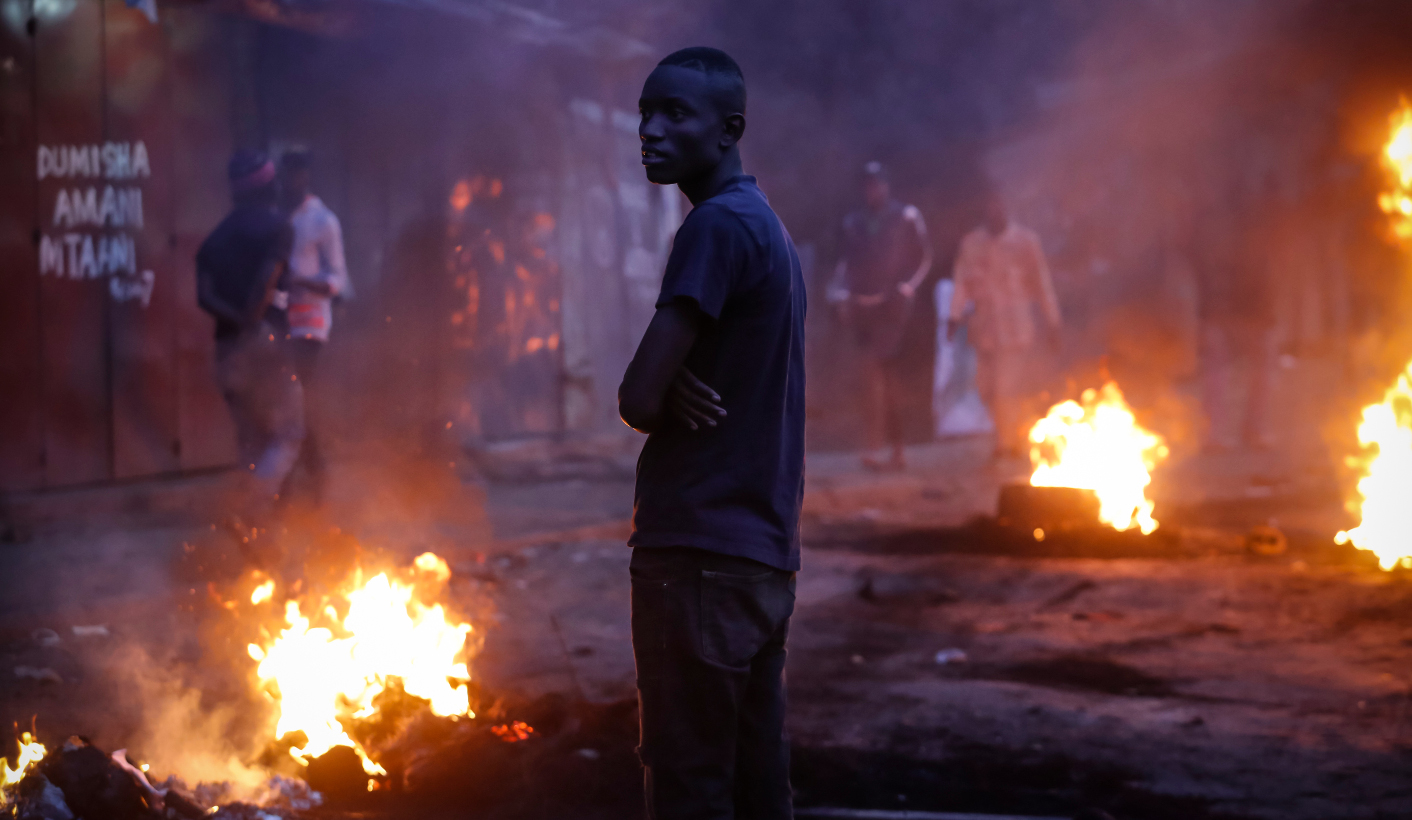 Minutes after contender for Kenya’s presidency Raila Odinga held another televised press briefing on Wednesday alleging serious vote-rigging by President Uhuru Kenyatta, protests and clashes were reported in hotspots like Nairobi’s Mathare, where two people have been shot dead and another five were wounded by police, and Kibera slums, as well as in Kisumu in the west. By CARIEN DU PLESSIS.

Hours after the polls closed in Kenya’s elections on Tuesday, President Uhuru Kenyatta’s supporters were already celebrating. Early results showed a convincing gap between him and fellow presidential contender Raila Odinga. The percentages stayed strangely consistent throughout the night and until the next morning, when more than 90% of the results were in.

These pointed to almost 55% of the votes going to Kenyatta, and almost 45% to Odinga.

Odinga, though, who has built a big part of his campaign on allegations that Kenyatta’s Jubilee Party would try to rig the elections, on Wednesday claimed the system was hacked. He also questioned the results streamed to the Independent Electoral and Boundaries Commission’s centre, which he said were not backed up manually by forms 34A and 34B, signed off by electoral officials and party observers.

Odinga said that according to the National Super Alliance’s tally of the forms, he had received a winning 8.1-million votes and Kenyatta 7.2-million out from a total of over 19-million registered voters.

“The fraud Jubilee has perpetuated on Kenyans surpasses any level of voter theft in our country’s history. This time we caught them,” he said.

Except, the 40,000 or so forms take time to produce because of the need to preserve a paper trail of evidence to keep things legit. This is one of the reasons the IEBC is given a week to declare the official results.

The IEBC also duly, at a press conference on Wednesday afternoon, promised to make the forms readily available for party officials to view should they wish.

Odinga started crying foul only hours after the polling stations closed – roughly at 02:00 the next morning.

Odinga has tried three times before to become president, and each time he failed, claiming rigging. This could be the 72-year-old’s last shot at the presidency as he is likely to have made promises to his Nasa partners that he would step down after five years.

The stakes are therefore high for both him and for Kenyatta, who, as the incumbent, would naturally be keen to hold on to his power and its benefits, and serve his second and final term.

Despite the claims of rigging, Kenyans who turned up at polling stations expressed faith in the system and a dogged patriotic belief that they have to make their mark.

On voting day, in the Kibera slum in Nairobi, Elizabeth, a 31-year-old mother of two and a casual cleaner, had been waiting for hours, and yet the line ahead of her was still long.

The open piece of ground, which looked like the groundworks of a building site, was filled with people queuing to get into one of the large gazebos sheltering the ballot boxes.

She didn’t want to say who she voted for, but Kibera is a Nasa stronghold.

Abraham Ashidira, a 24-year-old waiter, standing in another queue on the grounds, was more explicit. Dressed in a red Uganda soccer shirt, Ashidira, who is from the western part of Kenya near the border with Uganda, said he would rather support this country than his own.

“Kenya is not going in the right direction. [Ugandan president] Yoweri Museveni, even if he is a dictator, is better than the president [Kenyatta].”

He had been waiting for five hours to vote, and was likely to have to wait around for a couple more. “I will wait long because I want to make a change,” he said.

If Kenyatta had to win, however, Ashidira said he would not accept the result because his Luhya tribe had been neglected by Kenyatta’s Kikuyu tribe, in terms of service delivery and jobs.

“We are still being colonised by our leaders,” he added.

Instead, he would take his cue from Odinga (a Luo).

If Odinga declared the result wasn’t free and fair, and called his supporters to action, Ashidira said he would go as far as to die so that future generations could thrive.

It is exactly because of this sentiment that Odinga’s press conference would have raised the temperature – even perhaps irresponsibly so.

It was held even before all the results were out or the official results had been declared, and Odinga roped in an ICT guy to give a highly technical explanation of what had happened.

Few people are likely to understand how Jubilee would have hacked the system, but many would believe it possible.

It was up to Odinga to say what he planned to do about these claims – court action or a run-off (should no candidate get 50% of the vote), would have been two of the options – but he didn’t.

Instead, his running mate, Kalonzo Musyoka, proclaimed that due to the “tragedy” that had occurred, supporters “may be called to action”.

Odinga’s claims of rigging certainly hold water, and the IEBC said they would investigate the claims of hacking. In fact, there seems to be a kind of tacit and cynical understanding on both sides that you need to cheat the system to get anywhere. A 100% turnout in strongholds is one of the ways, with the swing counties then ultimately determining the result.

This doesn’t make the cheating right, but a disaster could be averted by following the correct procedures. In fact, former president Thabo Mbeki, who heads the African Union Elections Observer Mission, hinted at the importance of this, and his faith in these procedures, during a press conference the day before the election.

What could Odinga be playing at? More than one observer has hinted that he might want to aim for the second prize, like he did after the 2007 elections violence, which is becoming prime minister.

The country’s constitution doesn’t allow for it, but with enough pressure, and perhaps a violent crisis that might force some kind of a compromise and reconciliation, it isn’t impossible for him to pull it off again.

Odinga might not be popular enough to win all-out support for the presidency, but he has shown himself able to mobilise huge crowds, and he did after all get a not insignificant 44% of the vote.

Mbeki has previously remarked that the role of AU observers was not just to observe and report, but also to intervene when there is a potential crisis.

This situation could be a test of this. DM

Photo: A supporter of the opposition leader Raila Odinga stands in midst of burning tyres during a protest after Odinga announced that he rejects the provisional result of the presidential election announced by the electoral body, in Kibera slum, one of Odinga’s strongholds in Nairobi, Kenya, 09 August 2017. Photo: DAI KUROKAWA (EPA)