Motion of No Confidence: The ANC wins the battle but what about the electoral war of 2019? 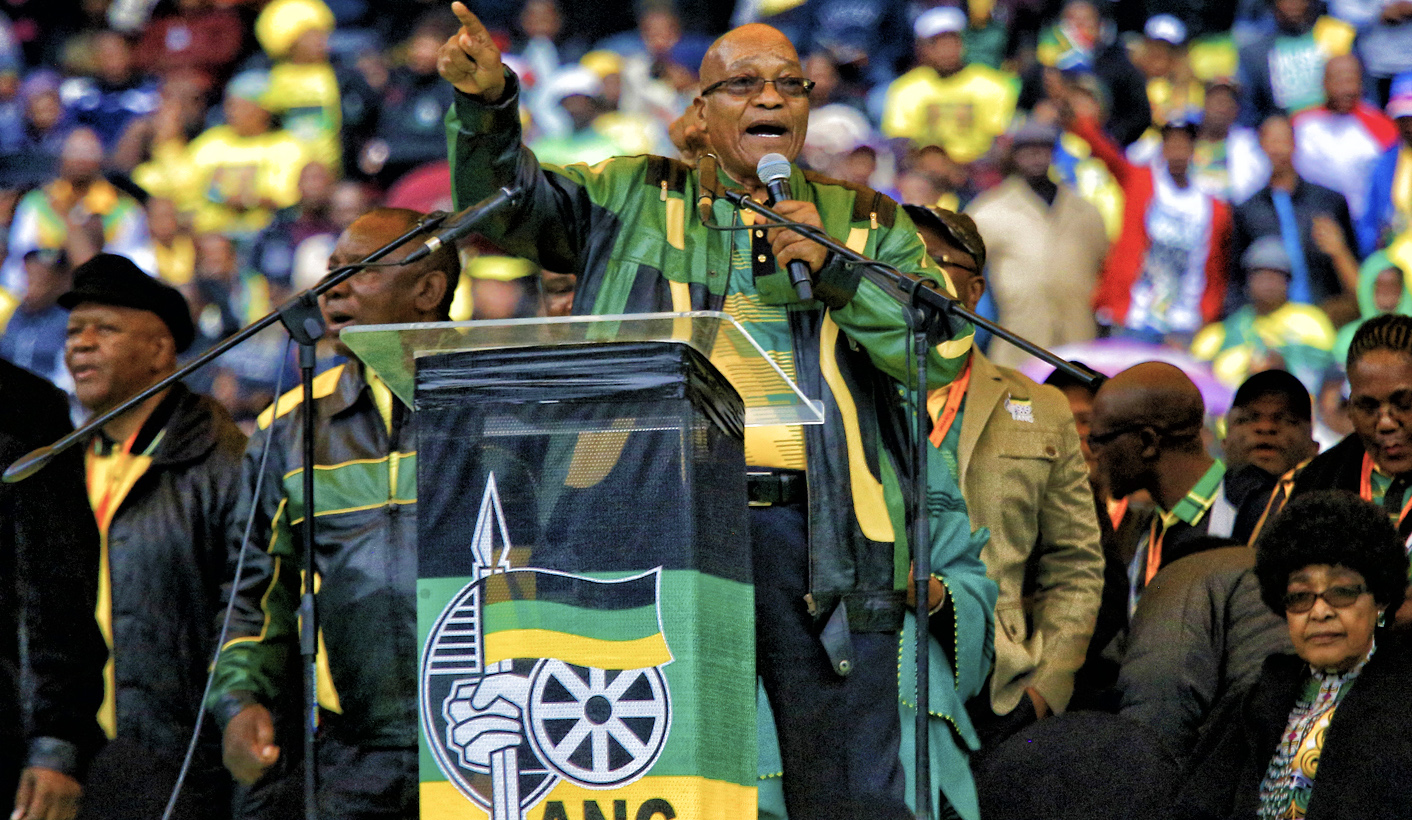 The ANC on Tuesday evening celebrated the defeat of the constitutional motion of no confidence in President Jacob Zuma despite the narrowing margin of 198 against, 177 for, and nine abstentions, in a secret ballot. But in clinching this victory in the political battles, both inside and outside the governing party, has the ANC lost the war as the 2019 election looms? By MARIANNE MERTEN.

What deals were made behind the scenes will only become clearer in the coming days and months, but with a secret ballot there’s always plausible deniability, an important ingredient in the politics of this time. ANC Chief Whip Jackson Mthembu indicated it was not important right now who may have voted for the motion or abstained from the ANC ranks. “That’s not our main focus right now. The focus is: the motion was defeated,” he told reporters after the vote outcome announcement.

But already on the night emerged a train of thinking that may have persuaded those with misgivings to throw their lot behind Zuma. According to at least two ANC insiders the thinking goes something like this: the no confidence motion was too close to the December ANC national elective conference where new leaders are set to be elected. Once that’s done, this new unencumbered leadership will criss-cross the country, interacting with communities to persuade them, again, to back the governing party in the 2019 election.

It’s an appealing argument because it connects with a deep-seated ANC culture of closing ranks in times of pressure. It touches all the right buttons, couched in terminology of “defending the revolution”, standing up to outside forces of the “enemy” and defending the ANC as the liberation party that brought about democracy and the party that represents [supposedly] 62% of South African voters. All this talks to the ANC rhetoric of “self-correction”.

However, outside Parliament, impromptu victory chants of “Zuma, Zuma, Zuma” erupted as unofficial word came of the defeat of the no confidence motion. On stage were those intimately linked to Zuma’s grouping: Social Development Minister Bathabile Dlamini, who is also president of the ANC Women’s League, which has endorsed former AU chairperson Nkosazana Dlamini-Zuma for party president, and Water and Sanitation Minister Nomvula Mokonyane. Also there was Finance Minister Malusi Gigaba to thank the gathered ANC supporters. Police Minister Fikile Mbalula earlier set the tone: “We were fighting there (in Parliament)… We have defeated them inside… We have the political consciousness to keep the ANC in power.”

Organised by the Cape Town ANC region, this show of support came from a solidly Zuma structure and the only region whose disbanding has been reversed following intervention by national ANC leadership.

And herein lies the rub. There are around six weeks to go for the ANC to finalise its membership audit, which is the basis for delegates to the December conference. It is understood the process to date has been shaky.

Regions from KwaZulu-Natal to Limpopo thought to support Deputy President Cyril Ramaphosa for president have been disbanded, or leadership and annual general meetings postponed. The factional battles also extend to provincial structures with the Northern Cape executive committee, understood to be pro-Ramaphosa, facing dissolution, according to City Press, while the Free State provincial ANC conference recently was postponed, reportedly due to “logistical” reasons, after long-term provincial chairperson and ardent Zuma supporter Ace Magashule faced push-back.

Delegates to the December ANC national elective conference are determined on the basis of this audit. At conference, the credentials of delegates is a key moment that decides conference. The possibility of the December conference collapsing is present, as is the possibility of a so-called unity slate including representatives of various factions, although defeated in discussions at last month’s ANC policy conference, was touted by Zuma in his closing address. It would be the salve to overcome factionalism, he said, adding he was prepared to take this proposal to every province.

It is against this background that Tuesday’s constitutional vote of no confidence must be seen. The motion was defeated 198 against, 177 for and with nine abstentions. On the numbers, it’s clear that at least 35 ANC MPs broke the party line. The combined opposition benches hold 151 seats, if everyone is present and in support. There could have been as many as 10 absences; a total of 384 votes were cast in the 400-strong National Assembly and the ANC earlier in the day acknowledged six apologies.

It has never been this close in any of the previous seven no confidence motions, with the last one of November 10, 2016 defeated with 214 against, 126 for and one abstention. This is a sign of the times: #GuptaLeaks, a technical recession, stubbornly high unemployment, persistently low business and consumer confidence – and an ANC unable to bring about fundamental change beyond pretty words on paper as it is wracked by factionalism and internal power plays.

Given public statements by some ANC MPs, some of those votes may not be a surprise. But a question mark hangs over those ANC MPs, some 40-plus, who are members also of the South African Communist Party (SACP). Having talked tough of wanting Zuma to step down, the numbers show not all in its ranks made use of a vote of conscience offered by the secret ballot.

The closeness of the vote was what opposition parties focused on in the aftermath. United Democratic Movement (UDM) leader Bantu Holomisa, whose party took the secret ballot to the Constitutional Court, said the vote had gone down to the wire. EFF leader Julius Malema said he was “more than happy”, pointing out Zuma could no longer count on unanimous support from his parliamentary caucus. “We are making progress. This is a big elephant. We will eat this elephant piece by piece,” he told reporters in the parliamentary precinct. DA leader Mmusi Maimane took a similarly upbeat line. And so did other opposition parties.

Earlier in the parliamentary debate, Maimane had appealed to ANC MPs to “vote with your hopes, not your fears”. Questions could be raised about his strategy to individualise ANC discord, citing the examples of the governing party’s MPs Pravin Gordhan, Derek Hanekom, Makhosi Khosa and Ramaphosa.

Malema tackled head-on the influence of the Gupta family, businesses and associates and said there had been little to show for previous ANC promises to do better. “We are not here… to remove a democratically elected ANC government. Ours today (Tuesday) is not against the ANC, but against the father of Duduzane (Zuma). We are here to remove Duduzane’s father because he is the most corrupt,” he said. “We warned you about Nkandla and you did not listen… In 2016 you lost some of the metros and your response was you could have handled this differently and you committed to improve.”

The four ANC speakers read off a script of asserting democracy and drawing its legitimacy as governing party from the over 11-million votes it received in the 2014 elections, while accusing opposition parties, who received over five million votes in the same poll, of regime change and “a political coup d’etat”, as Arts and Culture Minister Nathi Mthethwa put it.

And while the legal and constitutional provisions are clear – if the motion had carried the ANC would retain its majority in Parliament and be in a position to elect the next president from its ranks – the ANC in Tuesday’s debate irrevocably tied the motion to “collapsing the government”.

As ANC Deputy Chief Whip Doris Dlakude put it: “This debate is about our integrity as the governing party, public representatives and the nation which occurs in an environment of a democratically elected majority…. Is pitted against an insurrectional opposition (representing elites)”.

None of the ANC speakers mentioned Zuma in what could only could be a strategy to turn the spotlight on an ANC under threat by opposition parties, rather than the politician, who has faced a series of scandals throughout his tenure at the helm of government and against whom the ANC National Executive Committee (NEC) could not act.

“The only way the ANC can lose power is by way of a negative vote at the next general election. We cannot use means other than the people’s votes to try and topple the ANC,” said Defence Minister Nosiviwe Mapisa-Nqakula. “We should not use gerrymandering to get rid of a governing party. That would be akin to a coup.”

The regime change narrative of the ANC, brought again to the fore on Tuesday, is a dangerous one in a country where in the not too distant past people were killed after being labelled “impimpi (traitor)”.

All’s fair in love and war, the saying goes, and in politics that may be even more so. But the ANC was punished by the electorate in the 2016 municipal poll when its support dropped to 54% nationally, with the Nkandla debacle playing a vital role. Will Tuesday’s official ANC stance in the constitutional motion of no confidence, and the underlying minutiae of political brinkmanship, return to haunt the governing party come 2019? DM