Kenyan Elections: The dark underbelly to a noisy democracy 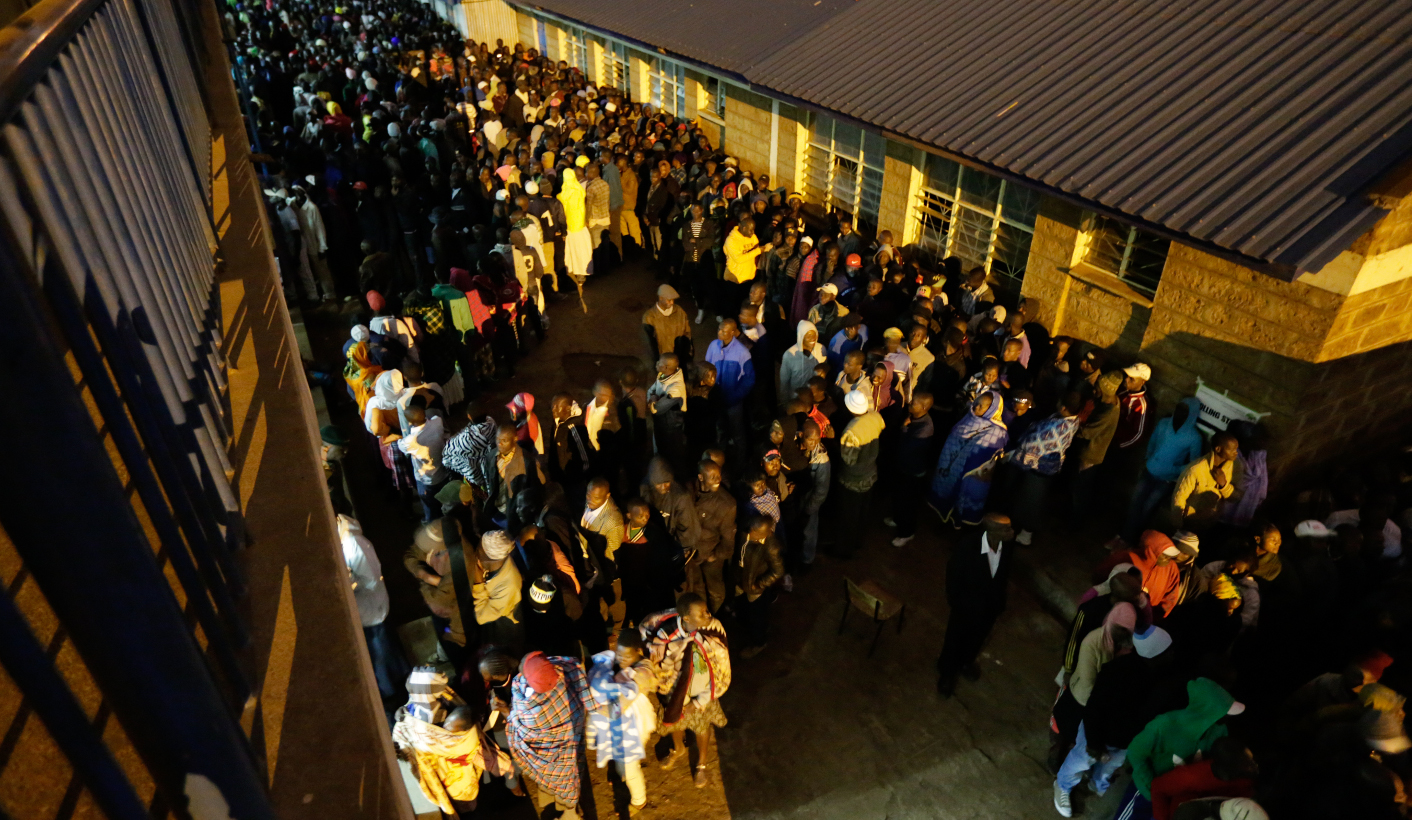 In Kenya close to 20-million voters will go out to cast their ballot in the country’s elections on Tuesday. While observer teams from the African Union and the Commonwealth urged the country to make Africa proud by coming out in their numbers to vote, residents in previous election violence hot spots were more concerned about just surviving the poll and its aftermath. By CARIEN DU PLESSIS

One morning 60-year-old landlord George Randa last week woke up to find his neighbours gone. “On this plot,” he said, scanning the small, dusty yard in which five families live five to six per room, “everyone left.”

This is Kibera, Nairobi, known as one of the largest slums in Africa, although some have questioned conventional claims that it houses about 1.5-million people. More conservative estimates put the population at less than a quarter-million, but this doesn’t make this reeking, ramshackle settlement look anything less than a perfect set for a doomsday film.

Rusty, corrugated iron structures lean against each other, but there are also more sturdy homes constructed with mud and sticks. In front of one lay a despondent-looking dog.

In places the neighbourhood resembles a rubbish dump, and dirty water – which a Red Cross worker was spraying for cholera on Saturday morning – runs in open ditches next to the gravel roads, wide enough only for pedestrians and boda bodas (motorcycle taxis) to pass.

Photo: George Randa in the yard of a small compound where he rents out rooms in Kibera, Nairobi. Photo: Carien Du Plessis

Randa’s neighbours-slash-tenants joined an exodus of people to their rural homes from this neighbourhood where, 10 years ago, post-election violence claimed a number of lives, including that of a 12-year-old girl who was hit by a stray bullet from a police gun.

Her insides spilled out as the bullet grazed her stomach, and there wasn’t a hospital open nearby where she could be helped.

“In 2007 everything was just fine,” Randa said. “We went, we voted, and came back, but after they announced the results, then tension started building up.”

When Mwai Kibaki was declared winner of the presidential poll – he ran against Odinga – people started making claims of rigging. This was later proved to have been accurate.

Kibera is home to many tribes, and in Randa’s little compound alone, members of three live side-by-side.

In fact, residents got so inflamed by violence that they tore out a part of the railway line, an important artery for the transport of goods to the land-locked Uganda. There were claims that police shot at people randomly. Countrywide more than 1000 people died and 600 000 were displaced in election-related violence.

It’s fears of a repeat of this, exacerbated recently by the brutal murder of high-ranking electoral official Chris Msando just over a week ago, that have caused people to trek out of town and panic buy stocks of unga (mieliemeal), rice and sugar.

Photo: Residents of Kibera, Nairobi walk along a railway line that runs through the area. Photo: Carien Du Plessis

Groups of 18 to 25-year-olds – youths too young to remember the events of 2007 to 2008 – who have gone around the settlement preaching a repeat of the near-civil war two elections ago. It’s not even clear if they did any party’s bidding.

“It is frightening,” Randa said. Nevertheless, he decided to stay behind to look after his property, but his wife went to their rural home in the Nyanza region.

In a place where people live so close to each other, it’s easy to see how fear could be endemic.

It’s not unique to Kibera, though. Even those in the middle and upper-class areas of Nairobi have left for the rural areas, while many expats decided to rather make a holiday of the week and leave the country.

Voting day on Tuesday has been declared a public holiday anyway.

Those staying behind have been given permission to work from home, where possible, while some businesses have adopted a wait-and-see attitude as to whether they would remain open or shutter to prevent swept-up crowds from invading.

Kenyan National Commission on Human Rights on Sunday expressed concern about the mass movement of voters, especially from urban areas like Nairobi, Naivasha and Mombasa. Voters are only allowed to cast their ballot in the constituency where they were registered.

There was “unnecessary panic likely to disenfranchise some voters and candidates,” the commission said. “We urge the security agencies to ensure that in areas where residents have expressed threats and intimidation such as the perceived hotspot areas, that they provide adequate security to enable free participation of citizens in the electoral process,” it said.

The fear is unsurprising. Opposition presidential candidate for the fourth time, Raila Odinga, has constructed much of his campaign around flagging instances of possible rigging. So far it’s been a fairly neck-on-neck contest and the stakes are high – for President Uhuru Kenyatta’s brutish and somewhat unpopular deputy, William Ruto, who wants to become president after Kenyatta’s term expires, and for fourth-time presidential candidate Odinga, aged 72, who feels he was getting on in age.

On the surface, however, Kenya’s democracy appears healthy. On Friday Kenyatta and Ruto – or #uhuruto2017, as their bromancing hashtag would have it – pulled off a massive rally on a large, dusty slope in Uhuru Park right in the centre of Nairobi. Supporters were all clad in red party T-shirts and caps, although one leaned in to privately confide that, he might be at this rally in governing Jubilee Party regalia, but he really supported Nasa.

Photo: The leader of Kenya’s opposition coalition The National Super Alliance (NASA) and its presidential candidate Raila Odinga (R) waves his fly whisk as he arrives at his election campaign rally in Nairobi, Kenya, 05 August 2017. NASA held their final rally in the capital Nairobi three days before the elections while its rival Jubilee led by incumbent President Uhuru Kenyatta held a rally in Nakuru. Photo: DAI KUROKAWA (EPA)

On Saturday Odinga used the same large stage (astonishing, isn’t it – imagine the ANC stage-sharing with any of the opposition parties!) for his final rally of twice or thrice as many thousands, some of whom walked the few kilometres from Kibera to attend. Seeing that it was a Saturday and that Nairobi is one of Odinga’s strong bases, his rally was bound to be large.

Most attending wore at least orange caps, while some carried sugar cane leaves, as these were part of the party’s logo. The rally was so full that crowds heaved forward and broke down some barriers.

There’s a dark underbelly to Kenya’s noisy democracy – and masked men (said to have been police, but this was denied by government) who on Friday night raided a results tallying centre set up by the opposition National Super Alliance (Nasa), and stole equipment. In addition, experts in data analysis and the prevention of elections rigging, jetted in by Nasa in time for the elections to work for the opposition, were deported.

Mistrust also spilled over after an announcement by the Independent Electoral and Boundaries Commission that connectivity in some polling stations was so poor that transmission would be slow or impossible.

Kenyans immediately started jumping to conclusions about a complete internet shut-down on voting day on Tuesday, as had happened in neighbouring Uganda during its recent elections, and some anecdotal reports that wifi has been slow in recent times, haven’t helped.

There have also been allegations of vote-buying and other politically-instigated killings on local level, where competition for resources is fierce.

In these elections, a total of 16,000 candidates would be vying for fewer than 2,000 positions, which means there would be a lot of losers and much high emotion.

Kenya’s interior minister stepped in on Monday  to try allay fears about security and police action at a press conference, saying the police were there to keep the order for citizens, not shoot at them

He could, however, not resist some last-minute propaganda by saying the police have been well-trained by the current Jubilee-led government.

Residents in potential hotspots like Kibera, would like to to think that this could be true. DM

Photo: Kenyan voters queue as they wait to cast their votes at a polling station in the Kibera slum, in Nairobi, Kenya, 08 August 2017. Photo: DANIEL IRUNGU (EPA)