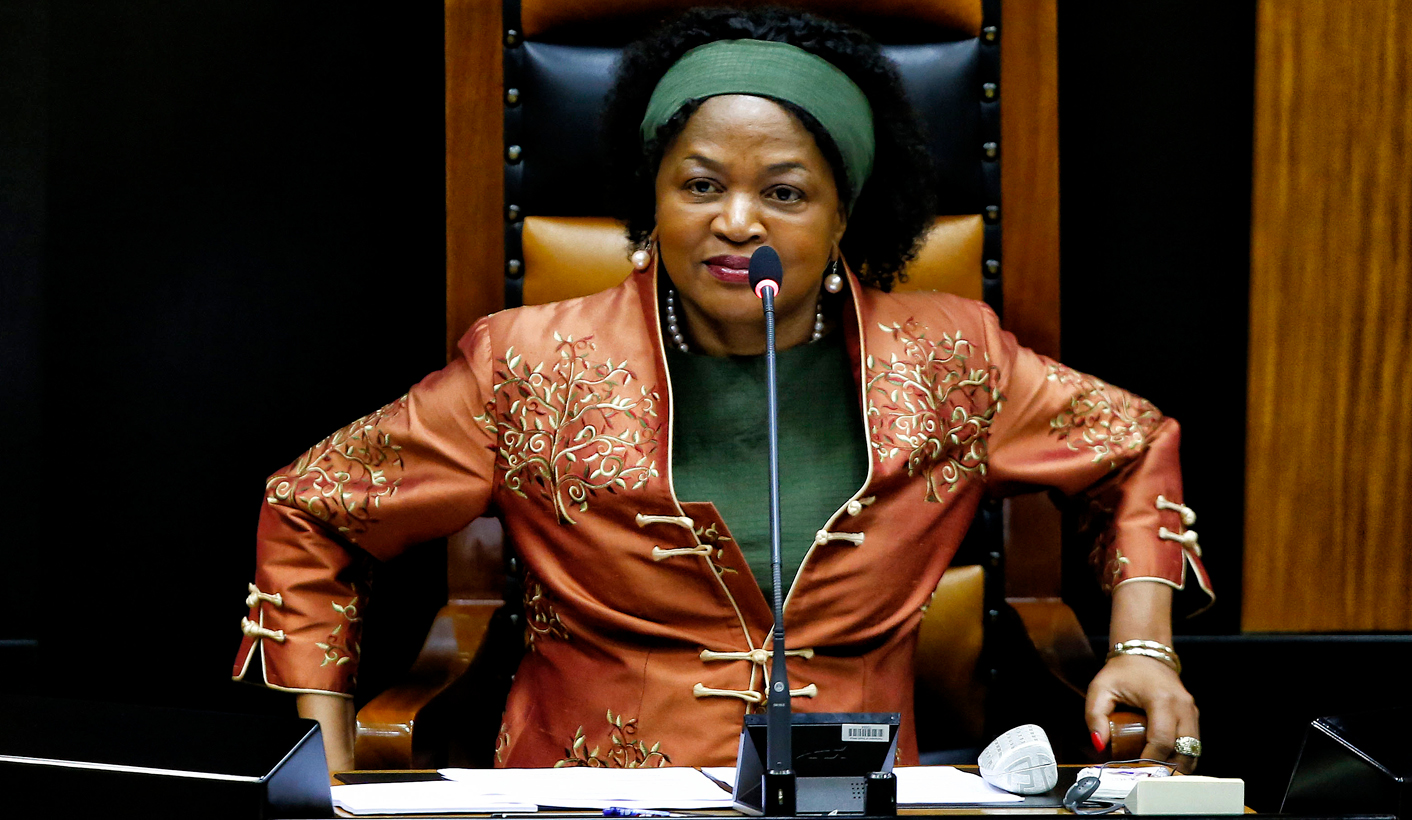 Opposition parties welcomed the decision for a secret ballot in Tuesday’s motion of no confidence in President Jacob Zuma shortly after National Assembly Speaker Baleka Mbete, who is also ANC national chairperson, made the announcement. The message for Tuesday? The secret ballot is an opportunity to put country above party, vote out corruption, and put South Africa on the right path. And no ANC MP should be afraid of doing the right thing. By MARIANNE MERTEN.

“I determine the voting in the motion of no confidence in the president on the 8th of August will be by secret ballot.”

That was Mbete’s decision – some six weeks after the Constitutional Court ruled it was her decision and her decision alone as to how the vote in this constitutional motion would go, and with less than 24 hours before the debate in the National Assembly on Tuesday.

There was a cough just before Mbete came to the crucial part of the vote being by secret ballot on Tuesday, and she quipped that it had come at a “strategic” moment.

But her decision was made. In a carefully prepared statement, with no questions allowed afterwards, Mbete made frequent reference to the Constitutional Court judgment of June 22, and cited intimidation, threats and other factors as part of the reason why the usual values of openness and accountability may in this instance be overruled. Her decision followed what Mbete said was “a thorough assessment of the situation and how it will impact on all members (of Parliament)”.

But clearly there were also other considerations, including that of the dignity of Parliament as the legislative sphere of state that is constitutionally mandated to oversee and hold to account the executive.

“I’ve heard voices expressing doubt (in Parliament),” the Speaker acknowledged, adding that this occasion was a moment to test the “resilience of democratic institutions”, to “show responsiveness to our people” and to ensure a “credible” outcome. “This is in the best interest of the country,” Mbete said.

Photo: Opposition leaders address a media briefing after the announcement by National Assembly speaker Baleka Mbete that the latest motion of no confidence in President Jacob Zuma will be decided by secret ballot. Photo: Marianne Merten

United Democratic Movement (UDM) leader Bantu Holomisa, who brought the secret ballot matter to the Constitutional Court after Mbete earlier this year said she did not think she had the power to make the decision, also welcomed her announcement. “It is time for public representatives to be faithful to their oath of office (upholding the Constitution),” he said, adding it was important to save South Africa from a corrupt president.

DA leader Mmusi Maimane quipped that his vote was no secret, adding that Tuesday’s secret ballot was a “start to set South Africa in the right direction”.

As the opposition leaders held their joint media conference before the bust of Madiba near the stairs to the National Assembly, thousands in the #UniteBehind people’s march gathered outside the nearby gates of Parliament. Vocal support of the secret ballot was audible, alongside shouts of “Away with the Guptas, away!”

IFP Chief Whip Narend Singh said a successful vote of no confidence would be the nuclear bomb to cleanse the country of corruption, as African Christian Democratic Party (ACDP) leader Kenneth Meshoe expressed his “delight”. Cope leader Mosiua Lekota said the secret ballot was “the only right decision any Speaker could have made”, and that this was “groundbreaking”. And for Freedom Front leader Pieter Groenewald, Mbete’s decision was the only rational one to take: “There’s hope for democracy and the integrity of Parliament.”

But, of course, there is nothing in the bag yet. Mbete’s announcement may  have come against the background of a governing party confident it holds the numbers in its parliamentary caucus to defeat the motion. That was what the ANC said in a statement reacting to Mbete’s decision: that it remained confident in the discipline of its parliamentary caucus to “defeat this frivolous motion”. This is an echo of what the governing party has said for the past three months: ANC MPs are bound by party discipline and the ANC in its highest structures has decided the opposition motion must be defeated as no one could tell the ANC how to conduct its own business.

However, the EFF is confident that it has secured the support of sufficient numbers of ANC MPs – 60 to 70 would be a comfortable margin – to secure the 201 yes votes for a successful no confidence motion. More lobbying, consulting and persuasion are set to unfold, not only from the EFF ranks, but also from within other opposition parties.