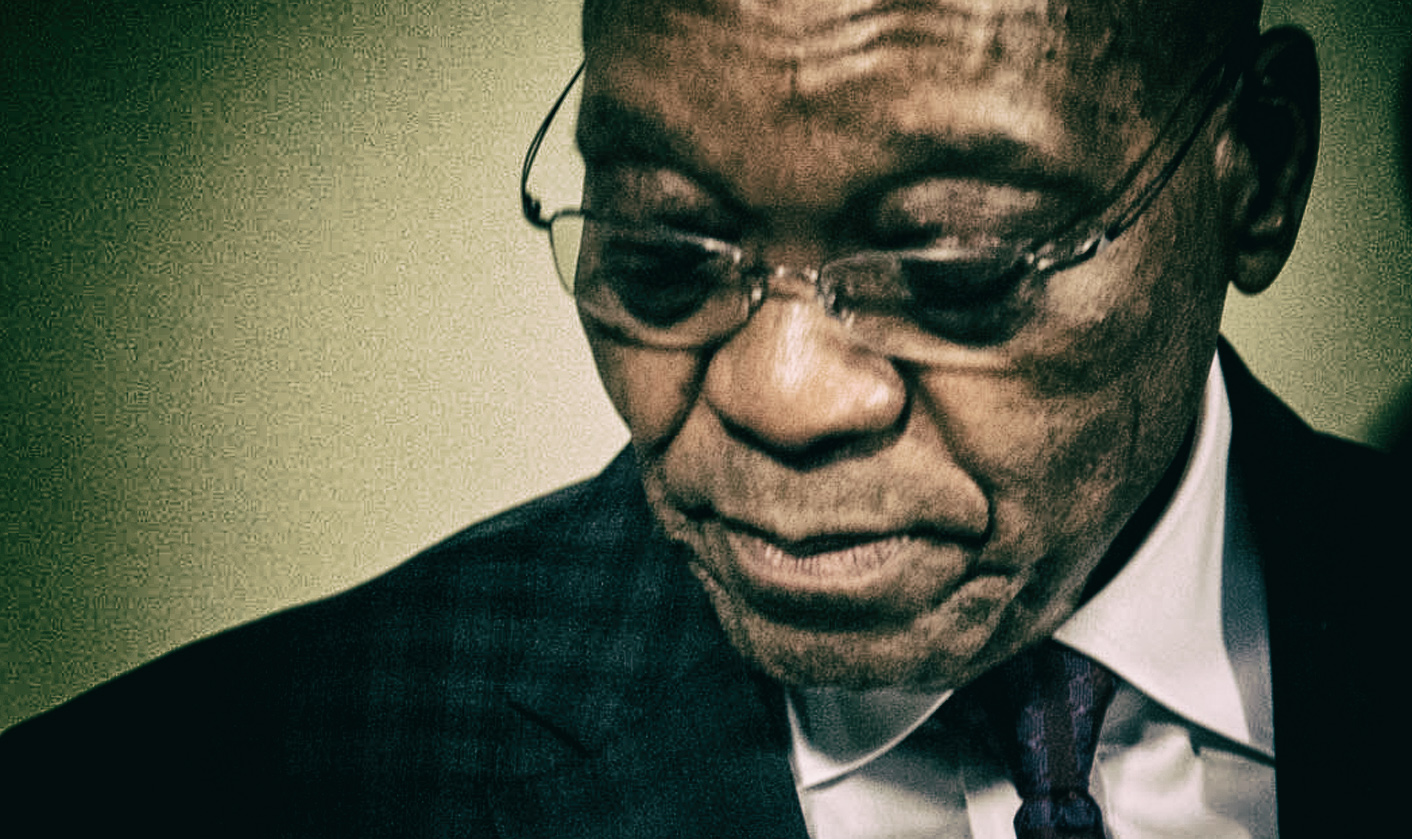 As per the Speaker of the House, Baleka Mbete, Tuesday’s no confidence motion regarding President Jacob Zuma will be conducted by secret ballot. A momentous occasion in South Africa’s young democracy, this gives ANC parliamentarians a chance to vote according to whim. Four hundred members of parliament, 249* of them members of the ANC, each one of them protected by a cloak of invisibility. All that is required to unseat Zuma is a simple majority. But there is no such thing as 'simple' in politics. By RICHARD POPLAK.

“Be rather than seem.”

The quote is traditionally interpreted as Cicero’s ode to and as a demand to avoid the endless performative bullshit that was as much a fact of life in Julius Caesar’s Rome as it is in Jacob Zuma’s Instagram era.

It is nonetheless an interesting aphorism to ponder as 249* African National Congress parliamentarians are transformed into ghosts—their materiality disappeared by the sweepingly momentous injunction engineered by Baleka Mbete in her role as Speaker of the House:

Secret ballot. Your vote belongs to your conscience.

Every member of the ANC’s parliamentary caucus, now in invisibility, has the chance to be, rather than to seem. This invites questions. After 23 years in power, who are the ANC? What principles do they stand for? And in a desperately unwieldy Big Party system—in which representatives are not voted into office by the people, but rather “selected” by the party—to whom do they owe their full allegiance?

As I write these words, infinitesimal particles of information, borne on invisible but detectable waves, are pinging around South Africa, demanding answers to these self-same questions. The party’s chief whip, Jackson Mthembu, has been emphatic on this score: ANC MPs are not individual actors, but part of a hive, answerable to a hive-mind, which acts in accordance its own interests. Mthembu’s office released a statement that succinctly and correctly summarized the troubling inconsistencies in South Africa’s version of democracy:

“[The] electoral system is not a Presidential system where a President is voted for as an individual but rather the party that wins elections deploys its presidential candidate. In the same the party would deploy its members as MPs as well as members of . It is therefore unthinkable that members who are deployed by a party as MPs would usurp the authority of the party that deployed them and remove another member deployed as a President at the behest of our political adversaries.”

In other words, bore someone else with news of your conscience—the will of the governing party is ipso facto the will of the people. Vote against Zuma, vote for the destruction of the ANC. The party cannot survive another bout of regicide.

The Chief Justice of the Constitutional Court, along with a full bench, interpreted things slightly differently. Mogoeng Mogoeng’s ruling on whether or not the Speaker of the House had the power to decide on a secret ballot, which impelled Mbete to create this new architecture of secrecy, contained a universe of subtleties, but was equally emphatic regarding who was responsible to whom:

“Public office […] comes with a lot of power. That power comes with responsibilities. The powers and resources [of the state] do not belong to the public office-bearers who occupy positions of high authority therein. They are therefore not to be used for the advancement of personal or sectarian interests. Amandla , , a or ya (power belongs to us) and (restore Africa and its wealth) are much more than mere excitement-generating slogans. They convey a very profound reality that State power, the land and its wealth all belong to “we the people”, united in our diversity. These servants are supposed to exercise the power and control these enormous resources at the beck and call of the people. Since State power and resources are for our common good, checks and balances ensure accountability and enjoy pre-eminence in our governance system.”

So as an invested observer, as a citizen, I reject the idea that this is an easy call. History sits in the middle of this, like a fat, mute Djinn: the whole palaver is a result of the ancient Sunset Clause, in which minority political outfits, in the National Party and the Freedom Party, were looking for existential guarantees, and were afforded as much in order to stave off Syrian-style carnage.

Which has delivered us at the algorithmic foot of Mbete’s Paradox, wherein the party is , and yet 400 MPs have now been unleashed by the Speaker to vote with according to their They confront on the ballot the fate of a president that has visited enormous destruction on this land—so much destruction that it’s almost farcical that he has lasted this long. And yet, he is entirely symptomatic of much larger evils. Eject Zuma: fix South Africa. The equation refuses to . But still, 249* ANC MPs have been offered the ability to hit a magically conferred reset button, one that comes with no guarantees, but nonetheless offers a chance of redemption, should such a thing exist.

Who wouldn’t hit that buzzer and walk into the Cape Town gloaming knowing that whatever the future holds, it doesn’t contain another interminable State of the Nation Address, punctuated by fistfights and by the sinister giggles of a gangster

Cicero was present in the Forum when Julius Caesar was slaughtered by members of the Senate. The great orator did not participate in the bloodletting, and nor did he precipitate it. But he watched as the conspirators hacked away at the human god, stabbing each other in their blood frenzy. Five decades of political skullduggery did not prepare him for the moment. “What had happened,” wrote a biographer, “was a mystery to him.”

Regicide, however banal and bureaucratic in its execution, is full of mysteries.

Shockingly, Mbete’s short address actually tried to incorporate all of these implicit mysteries, “in a balanced and rational manner, bearing in mind that some of these factors may be contradictory in nature.”

As such, her “balanced and rational” decision was not one most South Africans anticipated.

Yet Maynard Mack, in his essay “The Modernity of ‘Julius Caesar,’” couldn’t help but note “all rationality is simply a surface covering up private grudges.” The Speaker, abandoned politically by her master, has much to gain from Zuma’s fall. Her comrades in the party will be aware of the fact that should the King be taken down, she will enjoy up to 30 days as acting president, and that might be enough time for her to draft herself a future. She has drawn the King’s blood, certainly. But she has not struck the killing blow—that work will be left to others. However things unfold, she can say she was true to the vicissitudes of her office.

Indeed, the Western canon plays the death of Julius Caesar on repeat for a single reason: nothing is rougher than committing regicide. In the case of Zuma and the secret ballot, the ANC is a broad church, but it is still a village: is not really secret. The factions are, for the most part, well known; vengeance will eventually be sought. Game theory deserts us in such situations—the future becomes an . In these instances, one’s conscience is of limited utility. Fear, loyalty, squeamishness, exhaustion, the simple and understandable impulse to deny the opposition an easy win, the true belief that this all comes down to a regime change agenda perpetuated from afar—all will factor in those secret votes.

Forget the prognostications. Forget the numerical estimations. Enjoy, if you can, August 8, the outcome of which is presently unknowable, even to the experts.

This one comes down to the wire.

But it’s almost as if Cicero wrote the script for this moment in South Africa’s history. He understood the likes of Jacob Zuma; they have existed forever. Of them, he is said to have said:

“A nation can survive its and even the ambitious. But it cannot survive treason from within. An enemy at the gates is less formidable, for he is known and carries his banner openly. But the traitor moves amongst those within the gate freely, his sly whispers rustling through all the alleys, heard in the very halls of government itself. For the traitor appears not a traitor; he speaks in accents familiar to his victims, and he wears their face and their arguments, he appeals to the baseness that lies deep in the hearts of all men. He rots the soul of a nation, he works secretly and unknown in the night to undermine the pillars of the city, he infects the body politic so that it can no longer resist. A murderer is less to fear.”

Indeed. But Cicero also knew that fear, which is to say the driving mechanism of politics, never delivers simple outcomes. DM

(* The Anc has 249 seats, but two are vacant because of death (Timothy Khoza, who died in last week’s oversight vehicle crash & Trevor Bonhomme, who died at end of July). ANC Chief Whip Jackson Mthembu on Friday indicate “one or two” would be absent due to work commitments, including international travel. And there could be several absences due to ill health and/or hospitalisation, including Nomalungelo Gina, who was seriously injured in last week’s crash of the vehicle carrying the basic education committee on an oversight trip to Paarl. – Ed)