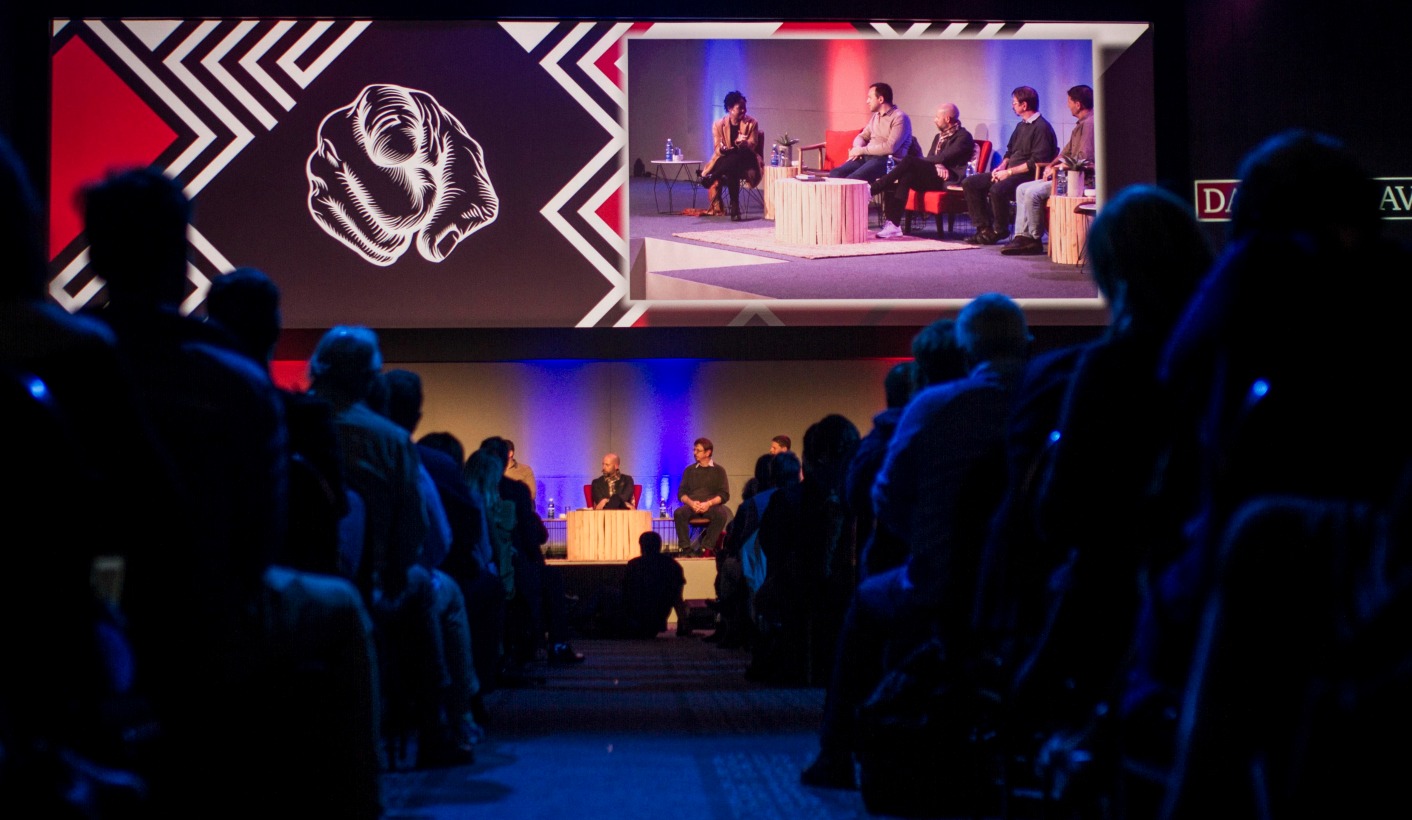 2017 has been a tumultuous year in South Africa thus far, and the Daily Maverick Gathering – Media Edition provided a way to stop for a minute and take stock. So what did we learn? For one thing, that threats to media freedom locally are very real – both from hired thugs and government. For another, that South African business is increasingly losing its rag with the country’s leadership. That civil society in this country needs journalists to step up more. And that decent people in government still exist, and hold out hope that the ship can yet be righted. REBECCA DAVIS takes a look at the highlights.

When you’re convening a day-long conference to discuss the challenges facing the media, it’s useful to have an illustration right outside the door. Gratitude is due, then, to Black First Land First’s Andile Mngxitama and a few pals for helpfully rocking up and trying to disrupt events – while bellowing threats and profanities at white journalists and telling journalists of colour that BLF pities them for their unthinking collaboration with the forces of evil. Thanks, guys, for making this point more directly than we could have managed: that South African media faces threats on a number of fronts currently, and one of them is from the mercenaries of BLF.

Journalists are always on the lookout for a scoop, but rarely do you get one literally delivered to your doorstep. Further commendation to BLF, then, for making the extraordinarily considerate decision to take off from the Gathering in a getaway car  owned by one of South Africa’s most controversial figures: former Eskom CEO and Gupta BFF Brian Molefe. It’s beautiful when everything comes together like that.

But…should we just ignore them?

On a more serious note, is the media playing straight into the hands of BLF by giving them attention? Businessman and activist Sipho Pityana says yes. “Why do you continue to give BLF oxygen on your media platforms?” Pityana asked the audience, describing Mngxitama and co as a bunch of “brownshirt thugs”. The Open Society’s Fatima Hassan later reiterated Pityana’s point. But others disagreed. The SA National Editors Forum’s  Sam Mkokeli pointed out that the BLF’s intimidation attempts are not targeted simply at the media, but also at civil society and politicians. Mngxitama had earlier given the ANC’s Jackson Mthembu a warning to protect President Jacob Zuma at all costs during Parliament’s no-confidence vote. As such, Mkokeli said, we should be taking them seriously.

Where SA media fails us

In case you got the feeling that the Gathering was a self-congratulatory media backslapping session, that wasn’t quite the case. Representatives from civil society had some fairly harsh criticism for the ways in which local media outlets are letting down the public. Open Society’s Hassan condemned the phenomenon whereby service delivery protests are often reduced, in news bulletins, to traffic disruptions. Section 27’s Mark Heywood lamented the media’s lack of interest in the Life Esidimeni crisis until it turned fatal, and suggested that local reporting was not paying enough attention to both underlying causes and the bigger picture. “Media needs to join the dots between state capture and state failure,” Heywood said.

Is the SA media biased?

This was the question posed by the DA’s Phumzile van Damme, who claimed that the media’s “infatuation” with the EFF allows Julius Malema’s party to “get away with murder”. In particular, Van Damme said, the media does not subject the EFF’s policies and statements to the same critical rigour and fact-based analysis as those of other political parties. The EFF’s Mbuyiseni Ndlozi was having none of that. “You [media] only like us when we say ‘Zuma must fall,’” Ndlozi said, suggesting that the media was reluctant to engage with the EFF’s more radical ideas about the economy and land.

Gupta media is not the flavour of the week

“Imagine a world where journalism is captured,” intoned MC John Vlismas at the beginning of the Gathering. But of course that world already exists – and the media outlets owned by the Gupta family, TV station ANN7 and newspaper The New Age, came in for a bashing. The EFF’s Ndlozi wanted credit for the EFF being the hipsters of media boycotts, having turned their back on Gupta platforms in 2014, way before it was widely popular. The ANC’s Jackson Mthembu, meanwhile, admitted that he does not watch ANN7, saying only that he had “freedom of choice” in that decision.

To regulate or not regulate?

As you might expect, the question of whether SA media is sufficiently regulated was one of the hot topics of the day. Former press ombudsman Joe Thloloe condemned the ANC’s long-mooted Media Appeals Tribunal as a fat waste of time and money, calling it plainly unconstitutional. This didn’t deter the ANC’s Mthembu, who reiterated the need for a parliamentary inquiry into an independent regulatory body. Such a body might even include members of the media, Mthembu threw in as a sop to journalists. The DA and EFF representatives present both came out strongly against the idea, but the EFF’s Ndlozi said that SA media’s current policy of self-regulation urgently needed to develop more teeth.

The ANC’s Mthembu believes that local media can redeem itself by participating in its own version of a (greatly belated) TRC, where it owns up to everything it did to support the Apartheid regime and apologises to the South African public. But how would that even work? As moderator Stephen Grootes pointed out, most of the media outlets participating in the Gathering didn’t even exist during Apartheid. “I appreciate the past is easier for the ANC to discuss than the present,” Grootes told Mthembu, which is what the youth would call a “sick burn”.

Who do you trust less: us or them?

Does the South African public trust the media? Absolutely not, says Mthembu. But then again, who does the South African public trust? Several people pointed out to Mthembu the irony of the ANC calling for the media to have greater accountability when the ANC has shown no signs of developing an accountable backbone when handling its cadres compromised by the #GuptaLeaks revelations. Former deputy finance minister Mcebisi Jonas would later he say he “almost jumped out of his seat” at Mthembu’s double standards. Mthembu, meanwhile, wriggled around and murmured evasions when asked what was happening with disciplining the compromised ANC figures, saying that “logically” they should be dealt with. Logically.

Business is gatvol of government

Prominent business leaders called on their colleagues to step up and speak out about South Africa’s leadership crisis. If business does not act now, warned businesswoman Wendy Appelbaum, the state and the economy is in danger of collapsing. But where has business been up to now? “Business hasn’t suddenly developed a conscience; they’re panicking,” suggested moderator Bruce Whitfield. But Anglo Gold Ashanti’s Pityana said he was encouraged by the “shift” he was witnessing in business leadership, where he detected an appetite to take on state capture. Appelbaum, meanwhile, called on business to support the media by establishing litigation funds and financing investigative reporting. Yes please!

The #GuptaLeaks emails are definitely not fake

No really, trust us. Refuting Atul Gupta’s recent panic-blabbing to the BBC that the emails are fake, AmaBhungane’s Stefaans Brummer assured the audience that there is “no possibility” that the trove of emails is anything but authentic, and said that if the matter were to come to court that point would be easily proved. News24’s Adriaan Basson, meanwhile, indulged in some speculation about how the #GuptaLeaks saga might have played out in a country with a functioning criminal justice system: a crack squad of police officers appointed to investigate the media reports; collaboration between the NPA and the Hawks to ensure the most thorough possible investigation; Gupta bank accounts and assets immediately frozen. Instead of which, we get: nothing.

What we could’ve done with the captured state money…

Former finance minister Pravin Gordhan admitted that he was “shocked” at the scale of the money that the Guptas and their cronies have allegedly managed to extract from state coffers. “Petty thieving might have happened,” he mused. But R100 billion? That was the figure thrown out by an earlier panel. “That’s 8 or 9% of total government expenditure,” Gordhan said. “You could double social grants with the money that was taken out of the system.”

Good guys are still around – sort of

The ANC’s Derek Hanekom was on hand to claim that fully 50% or more of ANC MPs are unhappy with the party’s leadership – though he couldn’t deliver any assurances that the relevant MPs would put their votes where their consciences are when the chips are down in Parliament.  But at least we know that those MPs aren’t sleeping well: “They are traumatised when things go so badly wrong,” Hanekom said. Gordhan urged the public not to lose hope in the future, however. “We can turn this country around in six months,” the former finance minister claimed. “The question is: can we actually set aside self-interest?” DM