The Cannabis Chronicles: What the State has just cost us 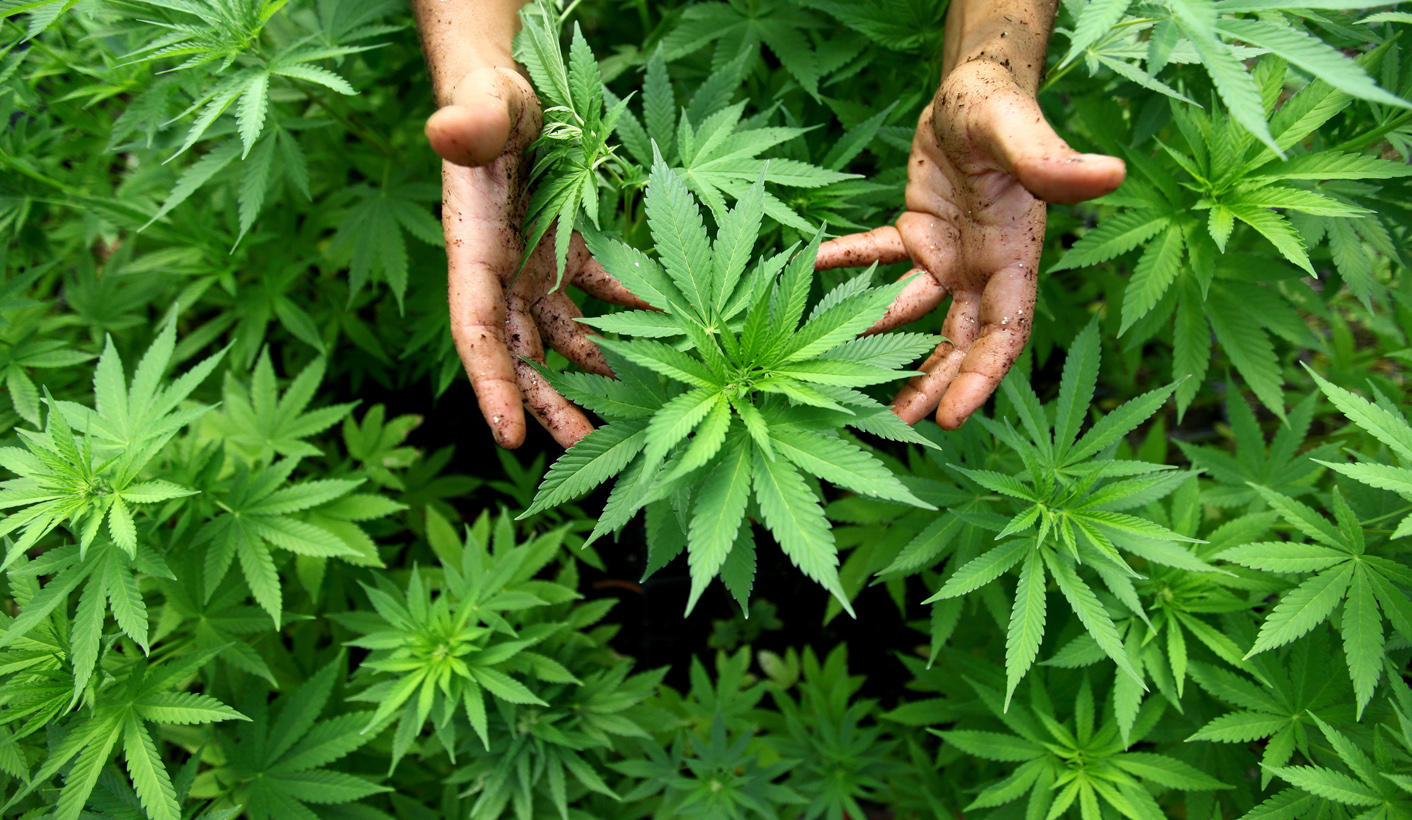 For the opening four days of the first truly scientific hearing into the merits of cannabis legalisation in South Africa, court 6E in Pretoria was the non-sequitur capital of the world. The state and its religious Christian partner, the anti-abortionist Doctors for Life, did all they could to ensure that top-tier medical science made it nowhere near the stand – even if it meant they stopped making sense. So what has the country lost? By KEVIN BLOOM.

I. Below the Belt

These were the 10 countries that Dr Donald Abrams recited from his notes while we were waiting for court to resume on Wednesday 2 August. The “Trial of the Plant” was only in its third day, and Dr Abrams – arguably the world’s foremost expert on the medicinal properties of cannabis, with 183 articles in international peer-reviewed journals to his name – knew it was unlikely that he would be called to testify.

“I would have given evidence on this had I been asked,” he told Daily Maverick, referring to the growing list of countries where medical cannabis had already been deemed legal.

For Dr Abrams, chief of the Hematology-Oncology division at San Francisco General Hospital and professor of clinical medicine at the University of California San Francisco, the snub was far from harmless. His cancer treatments, which for almost a decade had been marrying rigorous science with his own “whole plant therapy”, had either saved, extended or improved the lives of hundreds of human beings. But the South African state, it was now disturbingly clear, did not want to hear from him.

Since the morning of Monday 31 July, when South Africa’s first truly scientific constitutional hearing on the merits of cannabis legalisation kicked off in the North Gauteng High Court, the state had been playing everything but the ball. It came out swinging wildly on the live-streaming rights, arguing that Daily Maverick – which had offered its services as a media partner – was not a registered broadcaster. The ensuing back-and-forth took up two full court days, with the state eventually conceding that it would accept the SABC, and yet taking the matter on urgent appeal to the Supreme Court in Bloemfontein anyway. Then, on Wednesday morning, after Judge Natvarlal Ranchod had ruled that the SABC and 24.com could broadcast pending an SCA decision, the state and its co-defendant Doctors for Life (DFL) unveiled their real science-killing strategy.

“Your lordship, 19 days to argue this case is not necessary,” said Advocate Reginald Willis for the anti-abortion Christian lobby group DFL. “We ask your lordship to strike out those parts of the court documents that are irrelevant.”

Remarkably, given that the case number showed that the matter had been lodged in 2011, DFL and the state were refusing to engage on the plaintiff’s terms. They did not want, as per their own words to the court that morning, to read through “thousands of pages” of evidence. They had therefore asked the judge to strike most of the expert testimony from the roll. Before our very eyes, court 6E had turned into Non-Sequitur City: the DFL, which according to their website had grown concerned about “the role of dagga in crime, women and child abuse”, had joined the state on religious and moral grounds—and yet now, even though they’d declared on the self-same website that “the legalisation of dagga is not a matter of popular opinion but needs a scientific approach”, they wanted the judge to scrap all evidence that didn’t fit with their gestalt.

Dr Abrams, when Daily Maverick spoke to him after lunch on Wednesday, was one part irritated and two parts upset. “It looks to me like a big waste of time and money and energy,” he said. “I chose to make this my first medico-legal case ever, because I thought it was a very noble cause. I’m not a lawyer and I don’t know how to interpret in detail what I’m seeing, but it seems to me that the defendants are blocking my testimony.”

Seems? As Daily Maverick reported in July, Abrams was supposed to give evidence for the first three days of proceedings. What we didn’t report was how much it cost the plaintiffs, Jules Stobbs and Myrtle Clarke (known to all as the Dagga Couple), to fly him out. According to Stobbs, changing the return flight – a first-class ticket to Los Angeles – would have cost a further R132,000. Aside from which, as the defendants well knew, Abrams could not stick around indefinitely.

“I have to get back,” he said to Daily Maverick. “I have cancer patients.”

Here, from the hundreds pages of expert testimony delivered to the North Gauteng High Court in the name of Donald I Abrams MD, is a brief sample of the science that South Africans have just been deprived of:

To reiterate, the state and DFL did not feel like dealing with all of this, perhaps because the annexures contained phrases like “HIV RNA level” and “pharmacokinetic component”. And so they carried their strategy well into day four.

But then, just before midday on Thursday 3 August, after Advocate Leah Gcabashe for the state and Advocate Willis for DFL had spent the morning laying down yet more reasons for the ditching of expert testimony, Advocate Gcabashe requested a private meeting in the judge’s chambers.

“Before I give my decision?” asked Judge Ranchod.

“It really is to deal with the joint minute matter,” said Gcabashe.

Ah, the “joint minute matter”. As Advocate Don Mahon for the plaintiffs had pointed out the day before, the Dagga Couple had requested that a joint minute be set up in December 2015. “What is the prejudice that the defendants have suffered in preparation for this matter?” Mahon had wondered aloud. “They had 10 months to read the annexes and if something emerges during the course of the evidence, which is inadmissible or otherwise objectionable, they can object to it at that stage.”

Less than 24 hours later, Judge Ranchod had heard enough. “I don’t want it to be in any way construed that anything discussed in chambers… might have influenced my decision,” he said. “I think I need to make my decision on the facts as they were presented.”

And the facts as they were presented were the facts in the court papers – meaning that the trial was now finally going ahead.

It may have been three-and-a-half days delayed, but Advocate Mahon’s opening statement, when it did eventually come, was as lyrical as it was powerful. “It is our submission,” he told the court on Thursday afternoon, “that the essence of the matter is whether, one, those harms which are found to be causally connected to the use of cannabis are outweighed by the benefits of using cannabis; two, whether the harms associated with cannabis use are outweighed by the harms arising from its absolute criminal prohibition. Three, whether the harms associated with cannabis use are so severe and far-reaching so as to justify its blanket criminalisation. And four, whether it is rational or justifiable to treat cannabis users differently to users of substances which are equally if not more harmful, and which are not criminalised.”

In other words, was there any real constitutional basis for cannabis to be deemed illegal when alcohol and tobacco were good to go?

By the end of the day, Professor David Nutt, head of neuropsychopharmacology at Imperial College in London – who in 2009 had been fired by the UK government for drawing attention to the fact that taking ecstasy was safer than riding a horse – was on the stand. As far as “scale of harms” experts went, there were few better in the world. Still, the state and DFL had done all South Africans a disservice by preventing Dr Abrams from giving testimony.

“I’m a person who believes that incarceration is much more detrimental to health than the inhalation of cannabis,” he told Daily Maverick, in a summary that might’ve made it all the way to the Constitutional Court. DM