The Gathering – Media Edition: Business needs to act against state capture, or there won’t be an economy to talk about 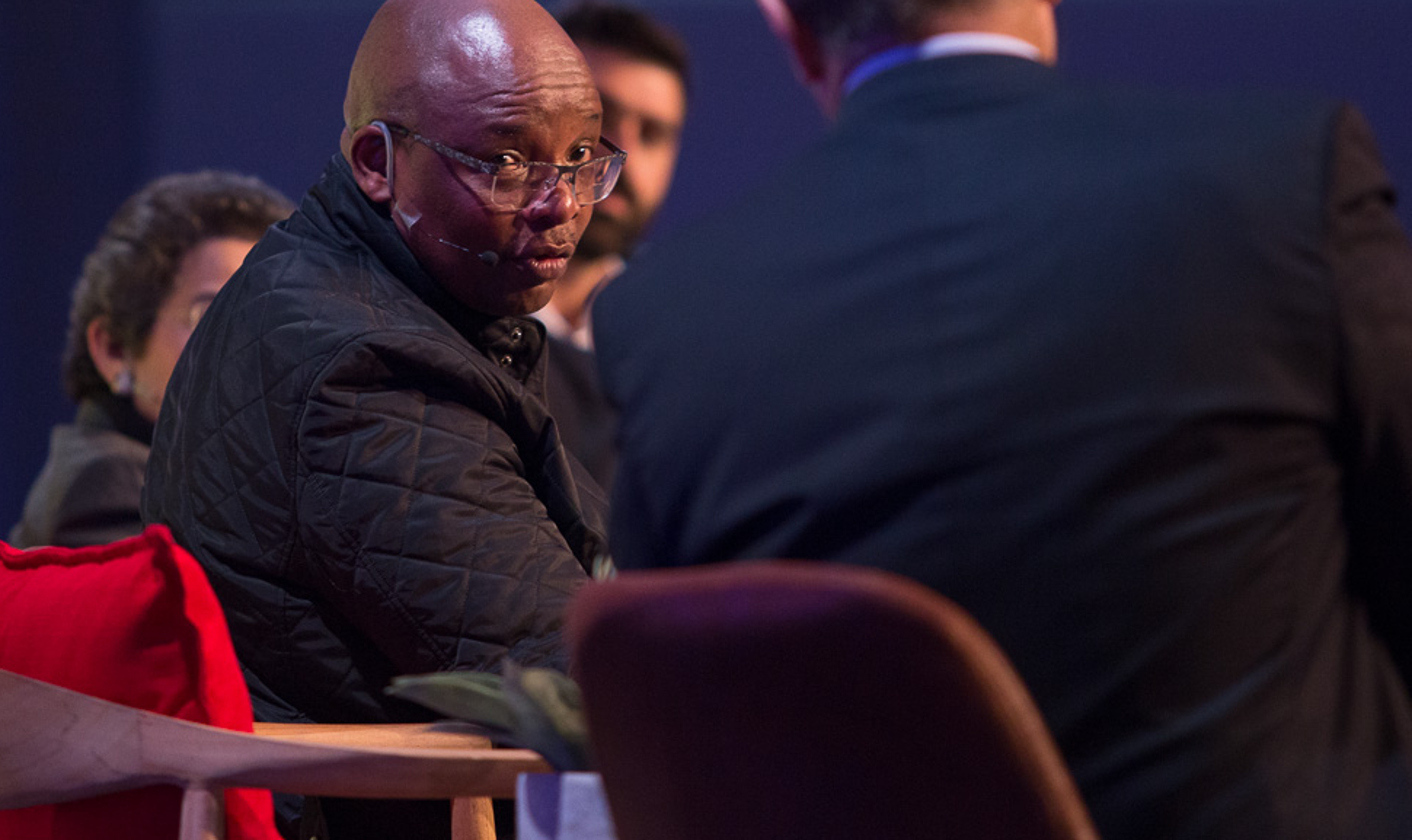 We have to stand and fight: for our freedom to speak, write, organise, march, protest. And we have to do it until we’ve rolled back the advances of state capture, taken back control of the state, and reclaimed our country for our children and our children’s children. BY SIPHO PITYANA

It warms my heart to see so many of you here today to learn and to speak and participate in the defence of our democracy.

I believe it is appropriate to begin today by acknowledging some of the real heroes of our struggle against state capture – the whistleblowers responsible for finding the Gupta emails, and the brave journalists who have trawled through them to expose scandal after scandal.

We would not know what we know if it were not for you. You are heroes and patriots, and we salute you.

We need to say this, loud and clear, today: Like the evils of apartheid that were exposed by The World, Rand Daily Mail and the Sunday Post in the 1970s and 1980s, the evil that journalists are exposing now is abhorrent, and a threat to the survival of our country, and the humanity of our countrymen.

In both cases, our journalists have exposed the criminals that are conspiring to dehumanize millions of our people. Back then, it was for an evil and corrupt ideology, while today it is a cabal of thieves and looters who are pillaging our public purse. Journalists and whistleblowers are shining a light on a band of criminals who are diverting billions of rands that could be used to feed, educate and uplift our people, and moving it to Dubai.

Thanks to your tireless efforts, these facts are no longer in dispute.

As whistleblowers and journalists, you are playing as important a role as the Percy Qobozas, Aggrey Klaastes, Sophie Temas and Mono Badelas who exposed the twin fists of oppression and repression, often risking their lives and their personal freedoms. In remembering our proud tradition of fearless journalists, we will in future talk about the Mantshantshas and Quintals, the Soles and the Sikitis, the Patons and the Poplaks. We will remember our Munusamys and the Bassons, the Thamms, the Brummers and the Jikas. The list goes on.

Without you, we would not have insight into the sheer scale of the state capture networks, and the extent to which the Guptas and others – under the guiding hand of the Godfather of State Capture, Jacob Gedleyihlekisa Zuma – have captured our country, in partnership with corporate robbers.

But one story still remains to be told when it comes to the Gupta emails. And I hope to read it soon: it’s the story of who is funding the BLF, currently one of the most poisonous threats to freedom of expression and to our democracy. The recent actions of these brown-shirt thugs – such as the attacks on Peter Bruce and their violent disruption of last week’s amaBhungane event – show how desperate the state capture project has become, and how close we are to the apartheid-era days of jackboot culture, repression and kragdadigheid.

We should all be worried about the emergence of the BLF. It is one of the ugly step-children of the Guptas and their Bell Pottinger project, along with ANN7, the New Age, the fake news Twitter bots, the WMC websites and the so-called Decolonisation Foundation.

Driven purely by money, these forces abuse and disrespect our freedoms and our democracy, and will literally do anything to get a few more rupees in the bank. They disregard orders of the court. They act as if they are untouchable. They behave as if they have the blessing of the police minister and his lieutenants. Wouldn’t it be wonderful if that could be dismissed as a ridiculous notion…

Together, we must stop the anti-democracy forces in their tracks. We must do everything we can, using the law and constitution as our shield, to defend our democracy against these mercenaries, these dogs of war, who are threatening the lives of journalists and others.

(A quick question I would like to pose, as someone who is not a journalist: why do you continue to give the BLF oxygen on your media platforms? Surely it is time to consider a boycott of their press conferences and “events”, and to no longer grant them interviews – as Barney Mthombothi and others have suggested?)

But it is not just journalists who should be concerned about the rise of BLF thuggery, the Gupta propaganda channels and the explosion of fake news.

Business should be equally worried, as it sees the other Gupta tentacles tighten their grip on our economy. So too should the faith-based community, professional bodies, our youth and broader civil society. Because today it is journalists who are under attack – tomorrow, it will almost certainly be you.

And if there isn’t a vibrant, probing media to investigate and report on the lawless activities of the Gupta’s various units and their co-conspirators in government and the parts of the private sector, you will be increasingly vulnerable.

Just ask the staff at Absa, who have to hide behind their desks when the BLF arrives to make demands about the Reserve Bank. These thugs have developed a method of intimidation that they will look to replicate across society, to silence anyone who speaks out against their masters. We must stand together to ensure they do not succeed.

On top of that, we should all be worried about the increasing evidence of a global financial conspiracy that is being exposed by the Daily Maverick in particular. It involves fellow-criminals in Russia, Asia, the Middle East and other parts of Africa. We should not under-estimate the lengths to which it is prepared to go to ensure it keeps on looting.

Here at home, business cannot avoid what is happening to our own country before our very eyes. Although we have probably only seen the tip of the state-capture iceberg, we have already seen the extent to which state-owned companies and corporate South Africa are complicit in corruption.

Business must take a stand on this, and speak out. It has a responsibility to increase its involvement. To raise its voice. To use its influence for good.

It must enforce integrity within its own community, and show that these are rotten apples – as we hope they are – and that they are not representative of business as a whole.

Organised business must isolate those complicit in state capture, and help to resource legal action against them. They must be made an example of.

Business must encourage its members to cooperate with international law enforcement agencies, who are increasingly interested in the Guptas’ money-laundering activities, if they have evidence or knowledge of wrongdoing.

It must actively support legislation around transparency in political party funding – so that we break the axis of evil that exists between some businesses and some political parties.

And perhaps most importantly, business should help to fund quality investigative journalism, and provide expertise in areas such as forensic audits, legal strategies and effective prosecutions. Journalists are the people holding the line against a total overrun of our state and our democracy, and they must have our total support.

Let me put it more bluntly: Business must do whatever it can to ensure that we get to the bottom of state capture – to expose it and to root it out, for once and for all. And it must do it now.

Because if it doesn’t act, and act now, there won’t be an economy to talk about.

Ultimately, this is about getting on the right side of history.

In my view, no one who cares about South Africa can afford to ignore what is going on at the moment. It is well and truly time to get off the fence and decide which side of history you want to be on.

There was a time, even up until recently, when children asked their parents: “what did you do during the struggle?” Our current generation of children will soon ask that of their parents, too. What is your answer going to be when your daughter or son asks you: “What did you do to get rid of state capture and bring our country back to the people?”

Each of us is being called upon to take a stand. The media is under threat. The judiciary is under threat. We have an NPA that doesn’t prosecute and a Public Protector who is not worthy of that title. Our proud state-owned companies have been hollowed out. Sars is a shell of the efficient machine it used to be. And Zuma’s nuclear deal, that he continues to push, could suck what is left out of the national fiscus.

We have to stand and fight: for our freedom to speak, write, organise, march, protest. And we have to do it until we’ve rolled back the advances of state capture, taken back control of the state, and reclaimed our country for our children and our children’s children.

In conclusion: as you are probably aware, civil society formed a new broad front this week to intensify the fight against state capture, and to ensure we reclaim our country from the crooks and looters.

The new front, called Future South Africa, provides an opportunity for business, the media, faith-based groups and other organisations to get on the right side of history, and ensure we stop state capture in its tracks. It is a non-partisan, non-aligned movement to galvanise the defenders of democracy, and ensure we pack even more of a punch in taking on the crooks and thieves.

Our immediate priority is the vote of no confidence in Zuma on the 8th of August, where we are calling on all MPs to vote this corrupt tyrant out of office. We are encouraged by the courage of ANC MPs such as Mondli Gungubele, Dr Makhosi Khoza and Derek Hanekom, and trust that they will get support from other ANC MPs who realise that this is a country game, not a party game.

We are calling for a national shutdown on 8 August to show South Africa’s revulsion, and call on business to support this initiative – as well as other sectors of society, such as trade unions and faith-based groups.

Beyond that, we are campaigning to recapture critical state institutions, restore credible leadership in all key departments and SOCs, and to reclaim our country. And we need all hands on deck to do so.

We cannot waste any more time. We have to act now to Save South Africa, and to ensure there is a Future South Africa we can be proud to live in. DM

Leaders have to make some painful decisions