The Gathering – Media Edition: Business must play a stronger role in supporting the media and defending democracy 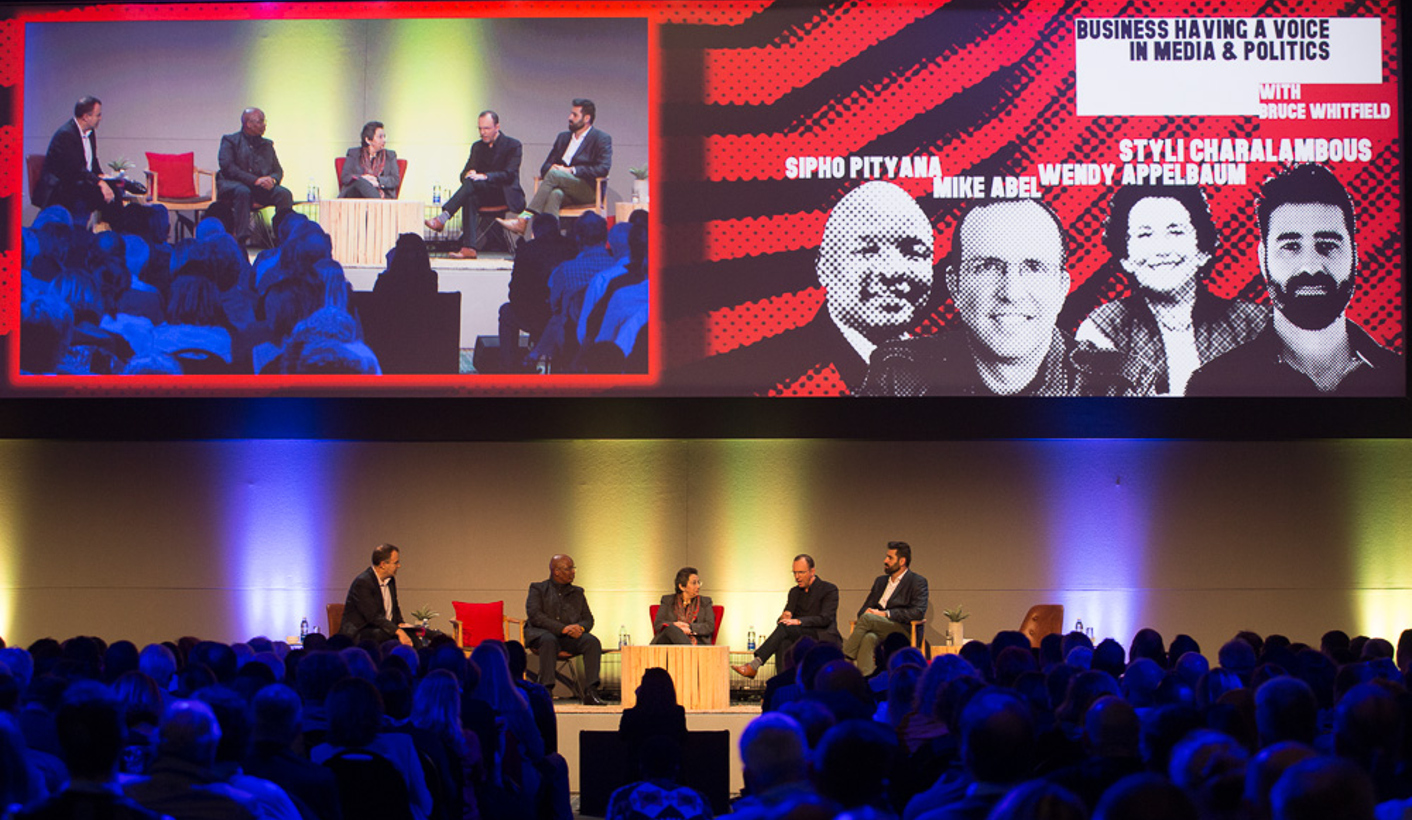 Daily Maverick The Gathering: Media Edition started on Thursday with a call for business to play a stronger role in supporting the media and defending democracy. The conference and the topic was a red flag for Black First, Land First, but discussion rather than disruption won the morning. By GREG NICOLSON.

Sipho Pityana praised the whistleblowers and journalists exposing corruption and state capture. “They in my view are the real heroes, the patriots, and we salute them,” said the AngoloGold Ashanti chairperson and Save South Africa organiser to a standing ovation.

They have exposed a “cabal of thieves”, he said. “These facts are no longer in dispute.” Well, not for most people.

Pityana was speaking on the first panel at The Gathering: Media Edition, discussing business and its voice in politics and the media. The event is being held at the Cape Town International Convention Centre. Before turning to the issues, he said one story still needs to be written.

“It’s the story of who is funding BLF (Black First, Land First), currently one of the most poisonous threats to our democracy and freedom of expression.” Pityana said Andile Mngxitama’s group, which has recently tried to intimidate members of the media exposing the Gupta family and their network of corruption, exposes how desperate the state capture regime has become.

Pityana asked why BLF continues to receive airtime, wishing they might be ignored as the ridiculous distraction they’ve become. He said business, faith-based communities, youth and broader society should be worried. “Today it is journalists who are under attack and I promise tomorrow it will certainly be you,” he said. “These thugs have developed a method of intimidation which they will replicate across society.”

On cue, BLF arrived at The Gathering and insulted security officials, who wouldn’t let them inside the conference, and passing journalists. They threw racial slurs at anyone who disagreed with them.

Inside the hall, Pityana called on the business community to get off the fence and act. “Business must do whatever it can to ensure that we get to the bottom of state capture to expose it and root it out for once and for all and it must do so now. Ultimately this is about getting on the right side of history.” BLF’s shouts could be heard in the background.

BLF’s campaign against “white minority capital” is a duplicitous distraction in defence of the Gupta family and their cronies. But the business community aren’t angels and have much to answer for in South Africa’s broken society.

“I think we all have to make very, very tough decisions about what we’re going to do rather than say,” said Mike Abel, chief executive partner at M&C Saatchi. Asked whether the call on business to act reflected companies’ self-interest and bottom line, Abel stuck to his point. “It’s not a matter of choice any more. It’s a matter of conscience.”

Wendy Appelbaum, philanthropist and businesswoman, said there was a reason the business community has kept its head in the sand – it’s scared of losing state contracts. “It is a very punitive state. There’s no doubt in my mind there’s consequences (of speaking out) for everybody.”

Since the firing of former finance ministers Nhlanhla Nene and more recently Pravin Gordhan, business leaders have taken stronger stances, both in their industry bodies and formations like Save South Africa. They’ve been called hypocrites, calling out Zuma while neglecting the role of capital in both present and past injustices.

“If business does not (act) they will have nothing left to talk about, irrespective, because this place is standing on a precipice,” said Appelbaum, arguing that the community must step up now before the state and economy collapses.

“I think there is a profit motive, shareholders are breathing down your necks,” she admitted. There are corporate good and bad guys. Many bad guys, she said. Companies, like the telecommunication giants, exploit the poor, but society needs systems of transparency and accountability. “Society rots from the head, just like a fish, and it’s a free-for-all at the moment because the sun is about to set,” she said.

As the discussion moved towards talking about the more dicey issues of just how business can help negotiate society’s challenges and the complications involved in supporting institutions like the media, BLF were told they would be refunded for their tickets.

Daily Maverick editor Branko Brkic said the group had lied about their identities when purchasing the tickets. Denying them entry was not about freedom of expression but the right to refuse entry. There’s a court interdict preventing the group from intimidating journalists and on Wednesday the courts heard an application to have Mngxitama arrested immediately.

Brkic said The Gathering: Media Edition programme was designed around people who have something to contribute to the discussion. “They just shouted,” he said of BLF. When the cameras stopped giving them attention, they were outraged. Then they were picked up in an Audi SUV and left.

The discussion around the media’s role in exposing corruption has been clouded by attempts to intimidate journalists and obfuscate issues. Debate and democracy have suffered. Now, hopefully, as Pityana suggested, we can move forward. DM