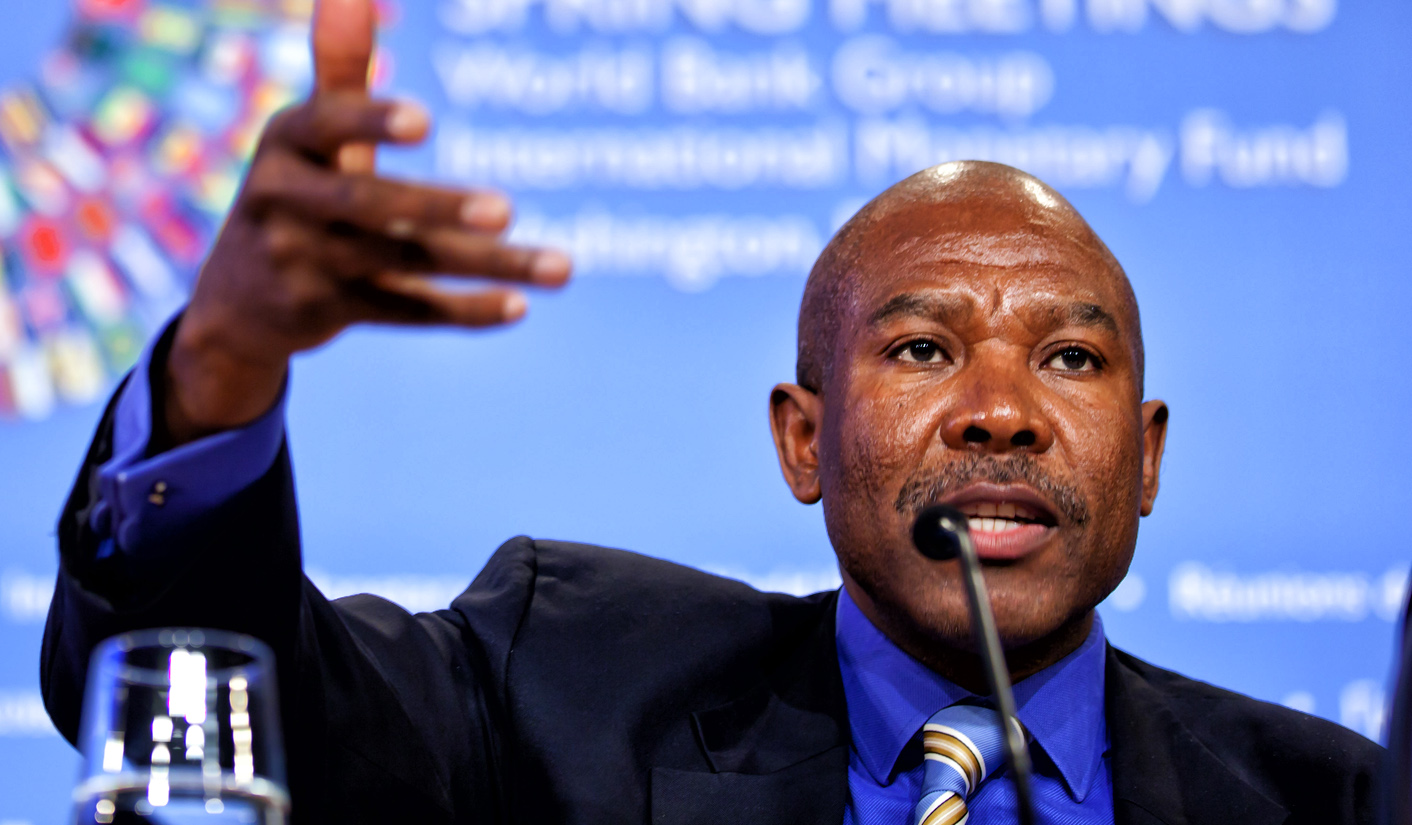 South African Reserve Bank (SARB) Governor Lesetja Kganyago on Tuesday delivered a spirited defence of the bank’s independence and constitutional mandate “to protect the currency in the interest of balanced and sustainable economic growth”. As he briefed Parliament’s finance committee, the Gauteng North High Court heard arguments in the review of Public Protector Busisiwe Mkhwebane’s controversial instruction for the Constitution to be amended to change the SARB’s job. Judgment is set to come well before the ANC December national conference that will take a final decision on the bank’s nationalisation as recommended by the governing party’s recent policy conference. By MARIANNE MERTEN.

While the SARB finds itself at the sharp end of contestation, it has been the South African economy that lost out amid almost immediate negative reactions to what often is ascribed to factional, populist or nefarious agendas. And in a low economic growth environment, marked by low business and consumer confidence, with a government sticking to policies without impact, none of that is helpful.

The rand dropped against the US dollar when the ANC national policy conference amid its factional rhetoric over (white) monopoly capital found one point of coalescence – the nationalisation of the Reserve Bank, to remove some 650 private shareholders, while retaining its independence.

This exchange rate weakening was a repeat of events of 19 June, when the Public Protector in her report on the Absa bailout of Bankorp instructed Parliament’s justice committee to amend Section 224 of the Constitution to broaden the bank’s mandate to “promoting balanced and sustainable economic growth and ensuring that the socio-economic well-being of the citizens are protected”. According to Kganyago’s founding affidavit for the court review, “the rand depreciated by 2.05% from R12.79 to R13.05 against the US Dollar. R1.3-billion worth of South African government bonds were sold by non-resident investors. Although some of these sales have subsequently been reversed, they were still significant. The day’s sales… rank amongst the biggest over the last three months”.

SARB, Parliament and Absa have taken the Public Protector’s report on review to court, arguing she overstepped her mandate in ordering a change to SARB’s role – not even the Constitutional Court tells Parliament how to run its business – and that her instruction to Parliament to change the Constitution was unconstitutional. Or as National Assembly Speaker Baleka Mbete, who is also ANC national chairperson, argues in court papers: “The Public Protector’s order… is entirely unrelated to the improper conduct that she has found to have been committed… Her order, that the Reserve Bank be stripped of its primary function of protecting the value of the currency, seems little more than a personal predilection wholly unrelated to the improper conduct that she found in this case”.

That’s not to say SARB rejects that its role is up for debate. Kganyago told MPs there was nothing wrong with contestation, but while everyone is entitled to their opinion, it must unfold on the facts.

“I fail to understand us South Africans. The institutions that are working, and are working well, seem to be under attack and that creates a significant problem,” he said, adding later: “Of all things that are broken and must be fixed, is changing the mandate of the Reserve Bank really the most important thing?”

The manner of the recent contestation of SARB’s role has fuelled the uncertainty frequently raised by rating agencies, both domestic and international investors and others. It’s something Kganyago has had to deal with at meetings with fellow central bankers this year. “Central bankers are not the ones crying wolf unless they are worried (because their country’s private sectors are worried),” recalled the Governor of the international meetings in January and May where he was asked what was happening in South Africa. “I took this as a signal regarding uncertainty, no longer a domestic matter.”

President Jacob Zuma and his administration usually finger the 2008 global recession for South Africa’s stubborn economic woes. Yet Kganyago on Tuesday painted another picture, one of a recovering global economy in which South Africa is being left behind.

His wish? “The sooner the uncertainties are cleared, the better.”

However, if the recent ANC lekgotla and other government initiatives are anything to go by, that’s unlikely. Finance Minister Malusi Gigaba’s 14-Point Plan, touted as a concrete action plan for growth, holds little new, and thus does not signal a determined effort to deal with the economy’s structural challenges. ANC Secretary-General Gwede Mantashe as much confirmed this during Monday’s briefing on the three-day meeting, when he described it as an “elaboration” on the existing government 9-Point Plan now endorsed by the party as well as government.

Instead, as the ANC national policy conference indicated last month, the focus seems to remain on visuals, like nationalising SARB, even if the removal of the 650 private shareholders comes at a high cost as shareholders would have to be paid out from an already stressed fiscus. Yet by law these private shareholders have no say in the day-to-day operation, policy directive of the bank, or its foreign reserves. Private shareholders appoint seven of the SARB board members from a pre-vetted list, but eight others – including the Governor and the deputies – are appointed by the president. While the private shareholders’ income is capped at R200,000 a year, government takes the overwhelming majority, or 90%, of profits.

“Get rid of the vanity project. Maybe government will take 90% and R200,000,” Kganyago said in response to a question from EFF Chief Whip Floyd Shivambu as to whether the private shareholding was not just a “vanity project” that should end.

That’s when ANC MP Derek Hanekom interjected to ask Kganyago about his silence on money being stolen: “You fail to say what must be done decisively with corruption and stealing”. The SARB Governor retorted that this fell under the category of what else could go wrong. “If we fail to act to restore confidence, we’ll get into all sorts of trouble.” And this could mean a stay-away by ethical investors as those with “nefarious interests” are attracted.

Instead, what emerged was a dysfunctional criminal justice system. For example, the woman about whom SARB provided law enforcement with information that she was unlawfully taking up to R2-billion a month out of South Africa was ultimately convicted, and jailed for 11 years, for attempting to bribe a SARB official in a sting.

The status of some 41 cases referred by SARB to law enforcement agencies in the past five years remains unclear. Finance committee chairperson Yunus Carrim, after Tuesday’s meeting, told reporters Police Minister Fikile Mbalula had also communicated his concern to him. This the finance committee, in co-operation with fellow parliamentary committees on mineral resources, police and trade and industry, will take up with the SAPS at the end of the month.

Where the bank can intervene is in protecting the currency in the interest of balanced and sustainable growth. And so last month it dropped the lending rates by 25 basis points – commercial banks adjusted the prime lending rate to 10.25% – to try to stimulate economic activity.

The SARB had moved from the premise that what the bank does is for growth, Kganyago told MPs. But structural impediments, from stubbornly high unemployment, transformation at a snail’s pace and persisting inequality, are public policy decisions for government. The state was the “biggest conglomerate” with assets worth R1-trillion, the biggest pension fund, a retail bank in the Post Bank and banks for agricultural and industrial development.

“If we say SARB (must have) a development mandate, why create the DBSA (Development Bank of South Africa) or the IDC (Industrial Development Corporation). Are you saying SARB take over DBSA, IDC, the Land Bank?” asked Kganyago. DM